The Bittersweet Journey Of A Short Hike 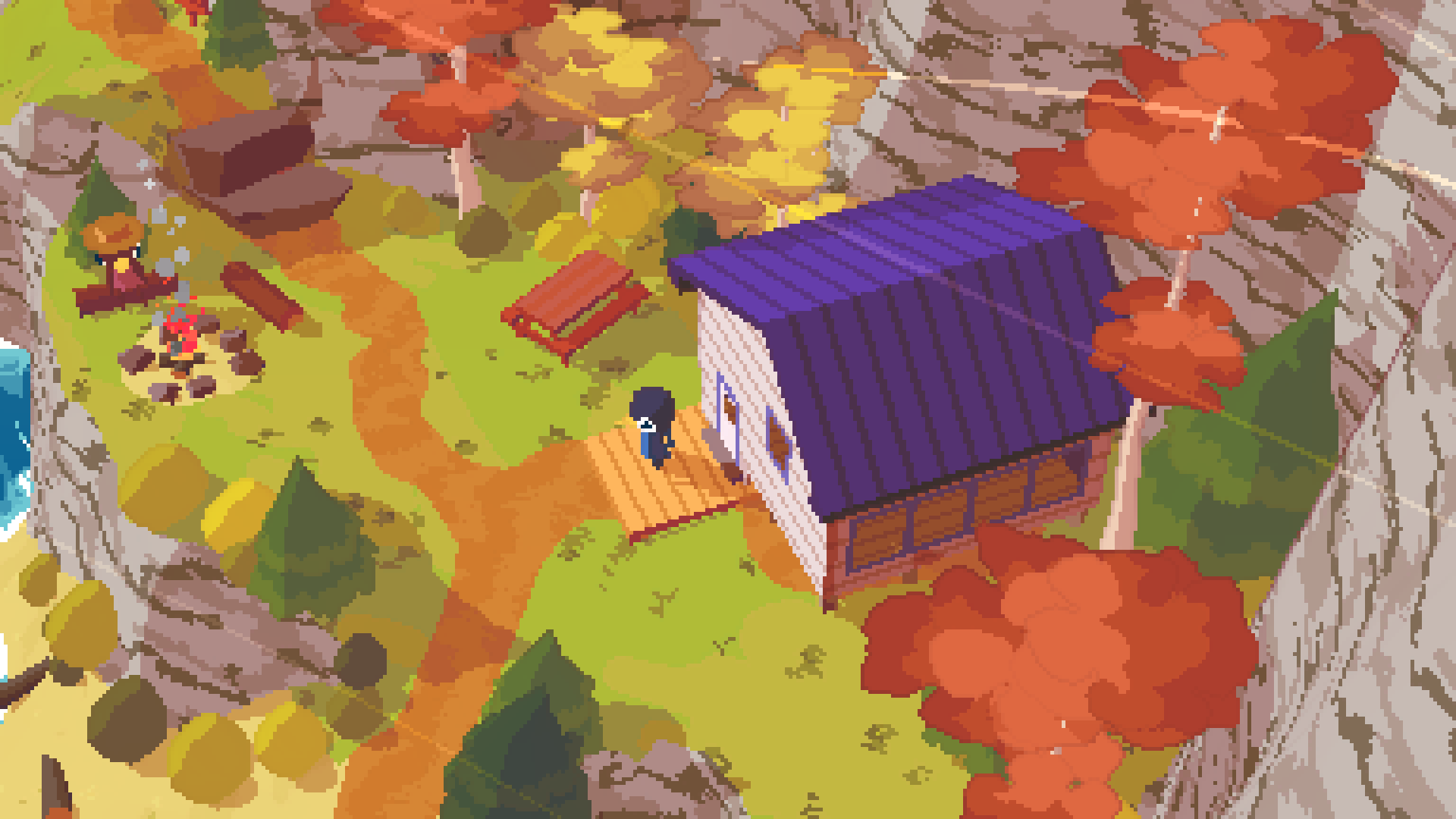 A Short Hike isn’t just a delightfully relaxing game. It’s also an unexpectedly real outing, with an ending that hit me hard.

Initially, I approached A Short Hike, created by Adam Robinson-Yu, as I do so many other games: running here and there to finish quests with the mindset of trying to complete the main task as efficiently as possible. As Claire, a bird stuck in the wilderness and in dire need of mobile phone reception, I was told to climb a mountain if I wanted to make contact with the outside world. And so, off I went with my goal-focused game-play mentality.

The experiences that followed showed me that this mindset was not necessarily the best approach to A Short Hike.

I wasn’t intentionally rushing through it. I did stop to marvel at the cloud wisps swirling around the island, and the way composer Mark Sparling’s wonderful soundtrack gently started up as Claire traversed different locations. I was charmed by the many conversations I had with the residents of its world. But I failed to really embed myself in the bright, colourful tones that made A Short Hike so gorgeously vibrant and peaceful. Until that is, I met a rabbit who was searching for her lucky headband. The rabbit, Sue, informed me that she needed the headband in order to race in an upcoming marathon. It was lost somewhere in the nearby forest, and being a good, quest-fulfilling Samaritan, I sent Claire on a search mission.

An Unexpected Turn of Events

It wasn’t long before I met up with a turtle wearing a red headband. A suspicious turn of events, surely, and Claire’s questions to the turtle echoed my thoughts. There was no foul play, however, and it just so happened Taylor the turtle had a red headband that they were willing to part with after hearing about Sue’s plight. Claire and Taylor devised a plan: it wasn’t the lucky headband Sue sought but maybe she wouldn’t notice a bait and switch. If luck was what she needed to get to racing, then Taylor and Claire could help push her in that direction with a replacement—after all, Taylor had been looking forward to racing against her. 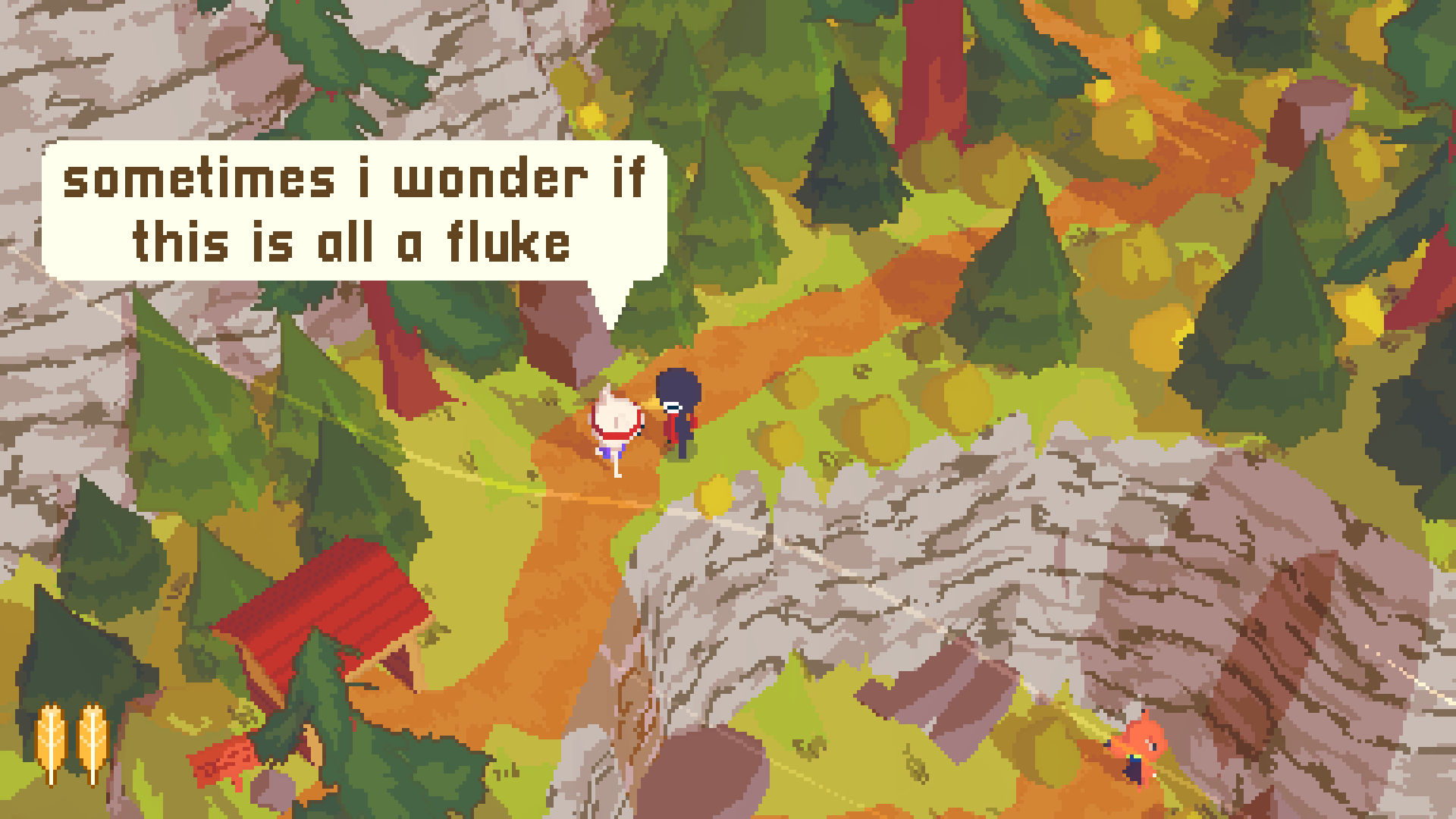 Sue didn’t fall for it, but what followed was a discussion that took me completely by surprise. To make a long story short, Claire questioned if Sue really needed the luck to compete in the race. In a show of a lack of self-confidence, Sue surmised that the headband allowed her to achieve her goals until Claire commented that it was training and talent that got Sue to where she is. “Aw,” Sue paused. “…yeah. I think I’ve known all along,” she continued. “But I don’t know. I get so nervous. Sometimes I wonder if this is all a fluke…but you’re right! I don’t need luck.”

It was right then that I realised this game was something special. The dialogue felt so genuine and realistic, and it was the first that truly stood out in a game brimming with witty banter. I started paying closer attention and found an interesting cast. There are characters who are paranoid, while others are sassy. There’s a good showing of real, down-to-earth personalities as shown through these snippets of conversations delivered by these animal NPCs. And in at least one instance, there’s also a fourth-wall-breaking nod—the kind of self-awareness that was surprising due to how well-realised the dialogues are in A Short Hike. It was also a pointed finger reminding me that I had been too hell-bent on approaching the adventure with a strictly game-focused mindset.

Despite the game’s lovely depth, as revealed by its conversations, I still wasn’t prepared for what happened when I reached the end. After two hours, I made it to the top of the mountain. I remembered why I was there, although Claire seemed to have forgotten. She was taken aback by the beauty that lay stretched before her. When her phone rang, it jolted Claire out of the moment. Who would be on the other line, I wondered.

When I first began A Short Hike, I had some misconceptions about Claire. She had holed herself up in a cabin for most of the day awaiting a phone call. I was under the impression she was being a bit of a bratty teen—locking herself away for a phone call, unable to disconnect from electronics and distancing herself from a more rural experience. I couldn’t have been any more wrong. But I figured as much early on. Claire’s interactions with others did not show a teen or young adult with an attitude problem. 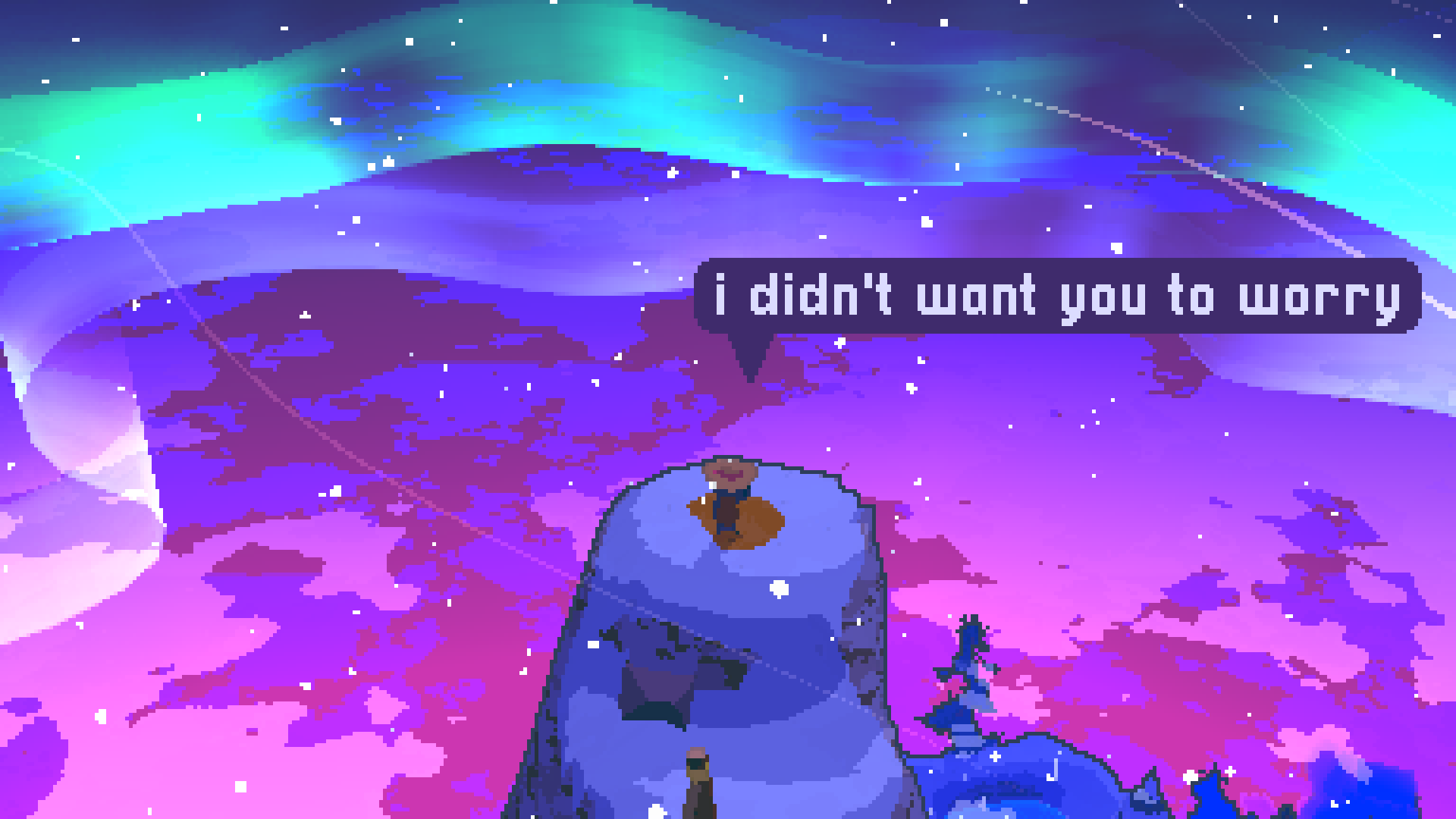 The phone call explained so much more. On the other line was Claire’s mother, who had sent Claire away to stay with her aunt May. It was revealed that the mum had to have surgery, and did not tell Claire beforehand. From Claire’s reactions, it was a pretty big deal even though her mother tried to downplay the severity of the situation. At least, that’s how I interpreted it. Claire’s mum repeated that she was fine. Claire protested that she could have been there for her.

When I read the exchange, tears welled in my eyes. I quickly looked up at my own mother who was busy in the kitchen preparing dinner for the family. Claire and her mum’s discussion was unexpected and earnest. For me, it was a stark reminder of the hard reality about growing older, and the dreaded subject of death and health concerns that we all face when thinking about our respective loved ones. It’s something I think about often with every new year that dawns.

I returned to the game to see the rest of Claire and her mum’s conversation play out. Claire’s mum noted that her daughter was growing up. After the chat was over, I spent more time exploring. I ran alongside the marathon runners. I flew around on the wind gusts, enjoying the sights and the rain that came down on certain parts of the island. I looked for treasures to dig up. Before returning to the cabin to see the end credits roll, Claire told her aunt about all the adventures we had. I looked back at my real-life mum and thought about Claire and her mum’s talk.

To be honest, I was unsure how to feel as the conversation unfolded. I understood that Claire’s mum didn’t want her to worry. This is true, too, of my own parents. They never wish to foist their worries on me and my siblings’ shoulders. But as we’re all older now, our parents’ concerns should be ours. And yet, they still feel guilty and worry they’re being burdens. Claire’s mum’s approach to the situation seemed unintentionally selfish. However, I recognised her point of view. It’s exactly how my Mum would be: hesitant to ask for help and infuriatingly stubborn to a degree. 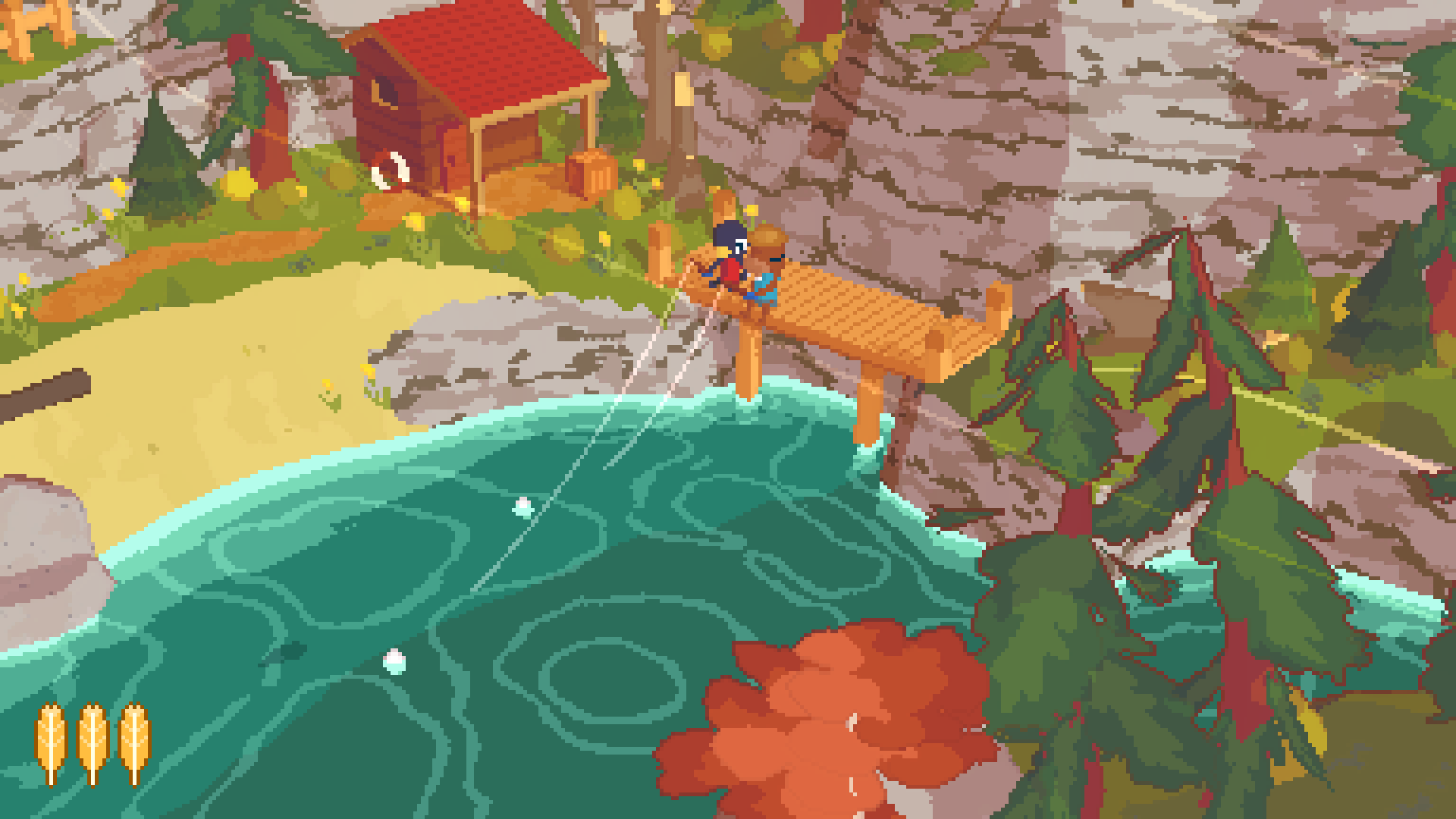 A Short Hike is a beautiful game. I love its portrayal of surprisingly straight-laced conversations with strangers that divulged insecurities. Sometimes it’s easier to talk with people you don’t know well to unveil hard truths—as was the case with Sue and the red headband. I also appreciated the game’s touching honesty about good family relationships, and how we treasure those we’re close to.

My anxiety about my parents won’t be ending any time soon. But there’s another point to all of this in A Short Hike. In this game about the things we miss in life, even if it’s due to being consumed by valid worries, we sometimes neglect the good and others who may be fighting their own battles, too. I haven’t forgotten to enjoy the positives in my own world. A Short Hike is a great reminder that there’s both good and bad to this life, and sometimes, as frustrating as that can be, it’s as simple as that.