The First Super Smash Bros. Ultimate Fighters Pass Was Definitely Worth It 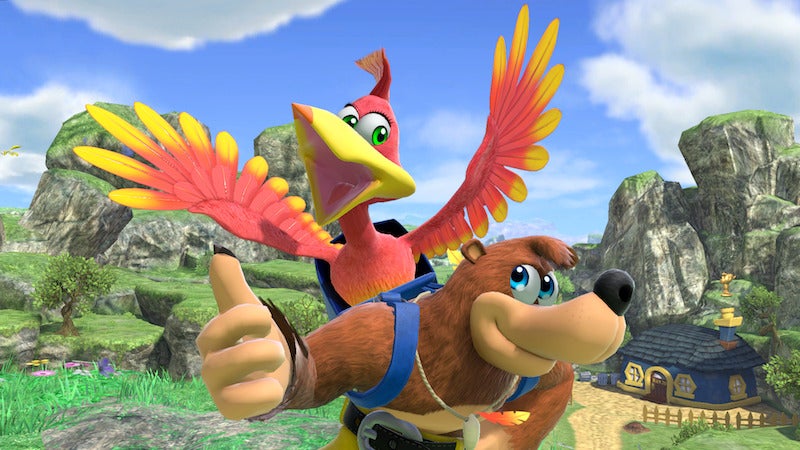 Byleth, the player character from Fire Emblem: Three Houses, is the sixth new fighter to join the roster since Smash Ultimate’s December 2018 launch. Starting with Piranha Plant, in January 2019, Nintendo has rolled out new fighters every few months. For the five most recent characters, they’ve thrown in a new stage—and new tunes, to boot.

It’s been a good way to keep the game fresh, even if some additions have stirred controversy. Most recently, some Smash fans lampooned the fact that Byleth is the eighth Fire Emblem character to get the Smash treatment, all while long-requested favourites are left by the wayside. (Let’s get some love for Waluigi, Nintendo!)

But now that the erstwhile Garreg Mach professor has joined the fray, Smash Ultimate’s first string of post-release DLC is complete, which means there’s a whole new thing to debate: Does this content meaningfully add to the game? For fans of the game—and even for casual players—the answer is an obvious “yes.” This DLC basically amounts to “more Smash.” And who wouldn’t want more Smash?

Like many time-partitioned DLCs, the post-release schedule for Smash Ultimate has been a tad confusing. If you were an early adopter of the game—in other words, you played it and registered online in the first two months after launch—you’d get a downloadable code for Piranha Plant. If you missed that window, you could still get Piranha Plant, but it’d cost you. Now, the toothy fella is only available as an individual download for $US5.99 ($9).

For the fashion-conscious, each Challenger Pack comes with a handful of costumes for Mii fighters, all inspired by popular gaming franchises. Want Altaïr’s hood or a Cuphead hat? Get Challenger Pack 5. Want to dress up your Mii like Sans, from Undertale? Get Challenger Pack 3. In total, it’s a wardrobe full of nearly four dozen outfits and pieces of headgear.

You can get each individual Challenger Pack for $US5.99 ($9). Or, if you pony up $US24.99 ($37), you can get the whole bunch—a deal Nintendo calls the “Fighters Pass.” (Bonus: Picking up the Fighters Pass will earn you a costume for the Mii Swordfighter: Rex, from Xenoblade Chronicles 2.)

Which new fighter is the easiest to pick up?

Since this is Smash, most characters are relatively easy to get a handle on. You know that up-B will get you back to the stage (probably). You know that side-A will charge up a smash move and launch an opponent off the stage (probably). But, for the most part, this batch of DLC characters each have a wrinkle of complexity beyond the Smash-standard “hold the the stick in one direction and then hit a button.”

Piranha Plant has a set of moves that are unlike those of any other prior Smash character and, frankly, weird. The neutral-B has Piranha spit out and suspend a spiked metal ball that barely travels and doesn’t bounce, while the side-B has Piranha spit out an area-of-effect cloud of poison gas that deals plenty of damage but no knockback. Joker transforms into his “persona,” and suddenly becomes a more formidable fighter as a result. Hero has a randomised moveset. Banjo & Kazooie can take on a different fighting stance, optimised for projectiles. Terry requires command inputs for true mastery, and always faces his opponents in one-on-one matches, two design choices that feel straight out of the era of arcade fighting games. The only new character who doesn’t shake things up in a major way is Byleth. 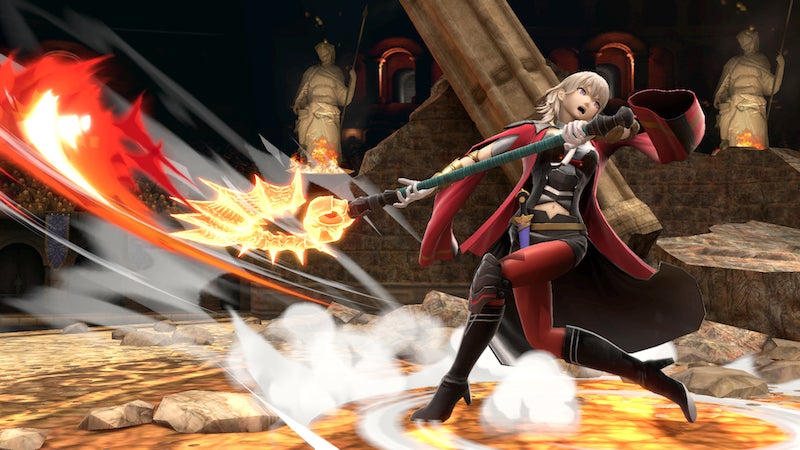 In our impressions post detailing this latest character, Kotaku’s Ian Walker called Byleth “refreshingly simple” with a “varied yet surprisingly basic moveset that gives players all the tools they need to succeed in just about every situation.” And yeah. Ian is spot-on. Sure, they’re a bit slower than, say, Marth or Lucina or Roy. But they’re faster than Ike, and just as versatile as Robin without carrying quite as much weight. If you enjoy playing any of the other 416 Fire Emblem fighters in Smash, you’ll feel right at home with Byleth.

OK, but which new fighter is the best?

Ask the pros, and they’ll tell you Joker is the best. Currently, pro player Mario “MKLeo” Lopez has swept the competition scene by maining Joker. Joker also happens to be the only DLC character who consistently lands on the upper echelons of unofficial tier lists (though it should be noted that, as Kotaku’s Maddy Myers puts it, “tier lists are full of shit”). Even Gonzalo “Zero” Barrios—a popular streamer who’s widely regarded as one of the top Smash players in the world—is on record deeming Joker the best.

But most players aren’t pros. Their skills are superhuman, and an unrealistic benchmark for those of us who aren’t blessed with godlike reaction times. For us hoi polloi, Hero is the best new fighter. 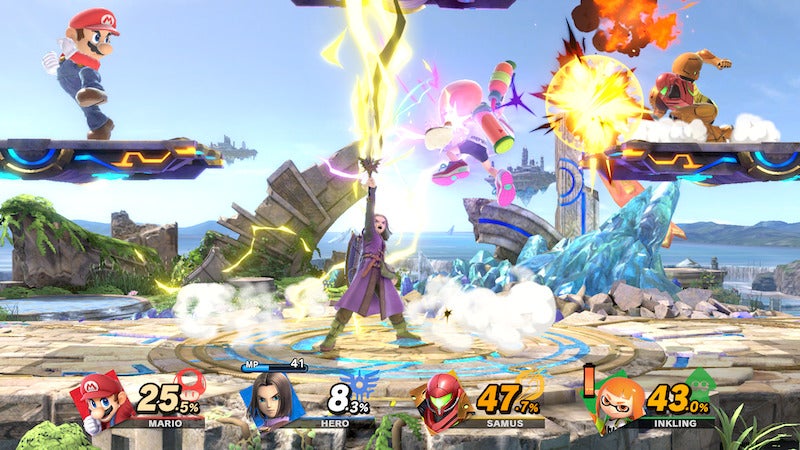 Hero’s gimmick is that, rather than having four special moves, like most fighters, he has roughly, oh, 400,000. By tapping down-B, you can pull up a randomised list of four additional special moves to choose from. Each one draws mana from an MP metre that refills at such a rapid pace you needn’t worry about really keeping an eye on it. Some moves, like Sizz, don’t really do much. Some have unique abilities, like Bounce (gives Hero a projectile-reflecting shield) or Heal (heals Hero). But the lion’s share could easily be qualified as WMDs.

Kaboom, for instance, sends out a lightning-quick projectile that goes kaboom (and sends opponents flying just as quickly). Magic Burst takes up half the screen and deals considerable damage. Kamikazee essentially guarantees a KO (though it will take Hero out, too, as you could probably guess). Hatchet Man can KO opponents with as little as 30% damage. Two other moves, Thwack and Whack, even have a small chance of an instant KO.

What Challenger Pack’s soundtrack is worth playing on repeat?

Fire Emblem: Three Houses. (You can get these 11 tracks in Challenger Pack 5.)

What new stages are worth playing? 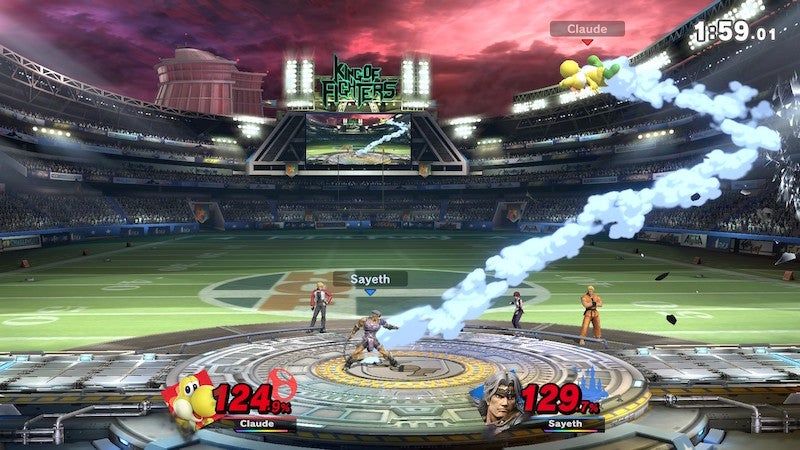 See, there are invisible walls on both sides. So, unlike many of the other screen-spanning arena stages, you can’t just unfairly corner an opponent out of the field of view and pulverize them into a KO. To score a KO, King of Fighters Stadium requires you to hit other fighters really, really hard—hard enough to shatter one of those invisible walls. (It’s unclear what degree of knockback is required to break a wall, but I’ve found that a solid hit on a fighter with 150% damage or more seems to do the trick.) Shattering a wall triggers a “special zoom,” the same kind of viscerally satisfying moment of slo-mo you trigger when landing Captain Falcon’s Falcon Punch or Jigglypuff’s Rest.

Since fighters can’t get launched off the stage, you won’t become the victim of an unfair spike. You also don’t have to worry about edge-guarding (the infuriating practice of knocking an opponent off the edge, refusing to let them back on the stage, and then delivering a finishing blow when their damage count hits a certain level). King of Fighters Stadium levels the playing field for fighters and players who may be weak in the air. 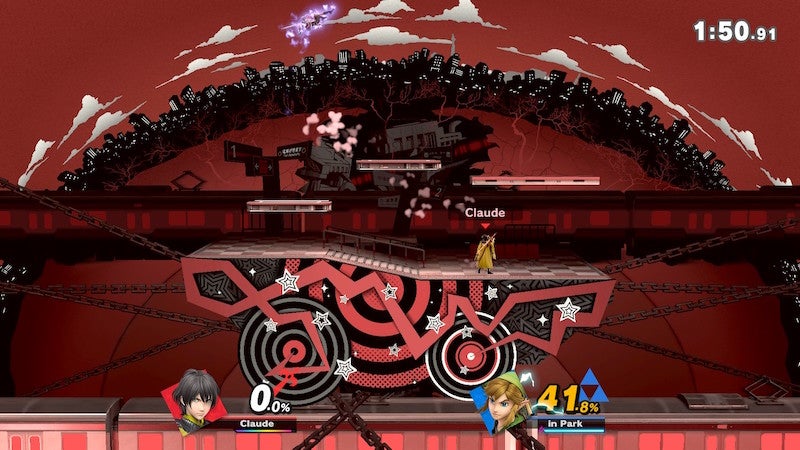 Joker’s stage, Mementos, is also a standout addition. For starters, it’s gorgeous. Whatever your thoughts on the Persona series (love it or really love it), you can’t deny that few games are more confidently stylish. Mementos draws colour inspo from three recent games in the series, and then matches it to the soundtrack. If a song from Persona 5 is playing, the stage will turn red. Persona 4 turns things blue. Persona 3? Yellow.

As far as how it plays, Mementos is essentially Battlefield—one large platform with three smaller ones floating over it—except with a topographical centre platform. The catch is that, every so often, a wall will randomly appear on the “roof” or one of the two sides, entirely blocking the blast zone. You could land a direct hit, one guaranteed to score you a KO, only to have a wall pop up at the last second, saving your opponent and giving them another lease on life (or that life). Is it maddening? Yes. Is it also a blast, a layer of unpredictability that takes one long-time Smash course to the next level? Also yes.

The other three stages—Yggdrasil’s Altar, Spiral Mountain, and Garreg Mach Monastery—aren’t anything to write home about. In fact, Garreg Mach Monastery plays similarly enough to another Fire Emblem stage, Castle Siege, that one can’t help but wonder how necessary its inclusion was. Best music in the game, though!

Is the Fighters Pass essential?

At the end of the day, more Smash is more Smash is more Smash. If you like the game, there’s a whole lot to like here—because, really, every Challenger Pack brings something to the table. The first one gave pros a new favourite main and regular players a sweet new stage. The second one introduced a truly unpredictable fighter to the roster. The third one answered the clarion call of fan service. And without the fourth one, King of Fighters Stadium would still be trapped in a dusty arcade cabinet.

If there’s one pack that’s a bit weaker than the rest, it’s the fifth one. (Did Smash players really need more Fire Emblem?) But buying four individual Challenger Packs is a dollar less than the Fighters Pass on the whole. And if you downloaded just the first four piecemeal, well, you’d miss out on the best new offering: the Fire Emblem soundtrack.