The New Aggretsuko Comic Has An Important Message About Flu Season 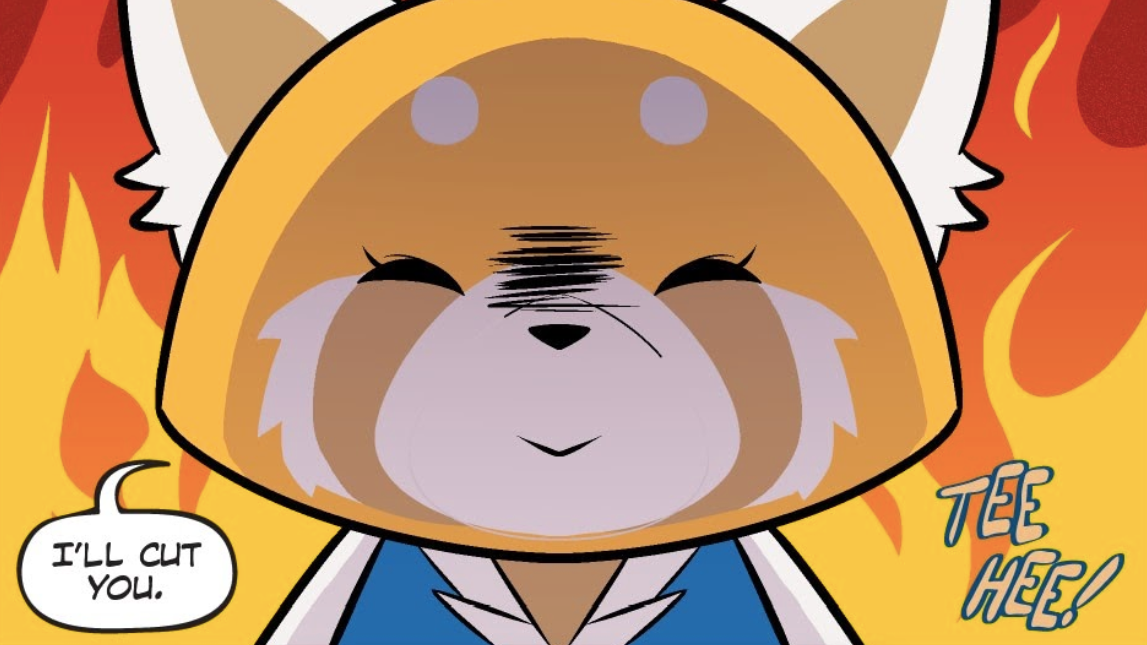 Tee hee! (Image: Oni Press)
To sign up for our daily newsletter covering the latest news, features and reviews, head HERE. For a running feed of all our stories, follow us on Twitter HERE. Or you can bookmark the Kotaku Australia homepage to visit whenever you need a news fix.

Listen up, nasties. Like many people working in big cities, Aggretsuko‘s Retsuko gets up every day, squeezes into a subway car full of coughing and sneezing people, and makes her way downtown. In her office, she sits in a cubicle for hours on end while breathing in stale, air-conditioned air. This routine is always terrible, but especially so during flu season.

ethos of the Netflix series that it immediately feels familiar.

One of the hazards of working in densely populated office spaces at times of the year when people are prone to getting sick is the very real possibility that one person’s cold makes its way around the workplace. Though Retsuko herself feels perfectly fine when she shows up to clock in at Carrier Man Trading Co., Ltd, moments after she gets to her floor, she’s besieged by a horde of her coworkers who’ve all suddenly fallen in with the same debilitating sickness that leaves them green in the face, oozing mucus, and generally being disgusting.

It’s unclear how, exactly, the illness is spread from person to person, but the infected are able to sense that Retsuko isn’t one of them, and they can’t stop themselves from trying to hunt her down to change that.

An outbreak of the C-Virus. (Image: Oni Press)

Like Resident Evil‘s Alice trying to escape from an Umbrella Corp. research facility, Retsuko desperately makes her way through the office in search of a means of protecting herself. Just as the horde’s about to catch her, she’s pulled into an office by a group of fellow survivors who’ve someone managed to stay safe. The outbreak, Retsuko’s friends Fenneko and Haida explain, was caused by the Carrier Virus (“C-Virus,” no relation to the current real-world outbreak), a unique pathogen that only exists within their office building and thrives on harmful workplace culture.

While many of Carrier Man’s employees are excellent at their jobs when left to their own devices, it’s common practice for management to put excessive undue pressure on its workers to overperform at the cost of their emotional and physical well being. Rather than understanding that the employees who work for the company are people, Carrier Man treats them as a mere means to an end and has no issue with them running themselves into the ground. The result? Plummeting morale, diminishing returns, and the outbreak of a pseudo-zombie virus.

Sharp as Aggretsuko #1’s commentary about working conditions is, it’s the rather simple and straightforward message about the importance of self care the comics lands on that ends up making it funny. One by one, all of Retsuko’s remaining coworkers fall victim to those infected with the C-Virus, and in the end, Retsuko’s left alone to make one of three decisions: She can hold out hope that the military will come to save her; she can give up and become one of the infected; or she can use the PA system to express her feelings through a death metal song, with the hopes of incapacitating all of the monsters hunting her.

Of course, Retsuko doesn’t die by the comic’s end, but she does decide to do something important for herself that we should all try to prioritise in the future. Retsuko doesn’t avoid getting sick, though by the time she’s got the sniffles, the office outbreak has long since passed. The important thing is that Retsuko makes the wise decision to stay at home and rest, both because it’s the responsible thing to do and because she deserves it.