The New Batman: The Animated Series Board Game Is A Big Box Of Bat Action

While DC handles Batman’s comic book adventures, the folks at IDW Games are in charge of turning the caped crusader’s animated adventures into tabletop crimefighting (or crime doing) for one to five players. There is a whole lot goiing on inside the box of Batman: The Animated Series—Shadow of the Bat.

Packed with miniatures, cards, tokens, map pieces, and thick manuals, Shadow of the Bat looks like a very complex tabletop board game, but it’s actually pretty simple. The board is set up to simulate a conflict from The Animated Series, like a shootout or a heist. One to four players take on the role of heroes, moving, attacking, and using special abilities while trying to thwart the bad guys. In competitive mode, one player controls the villains. In cooperative mode all players (or a single player) work together. The game comes with a thick booklet filled with pre-made adventures. 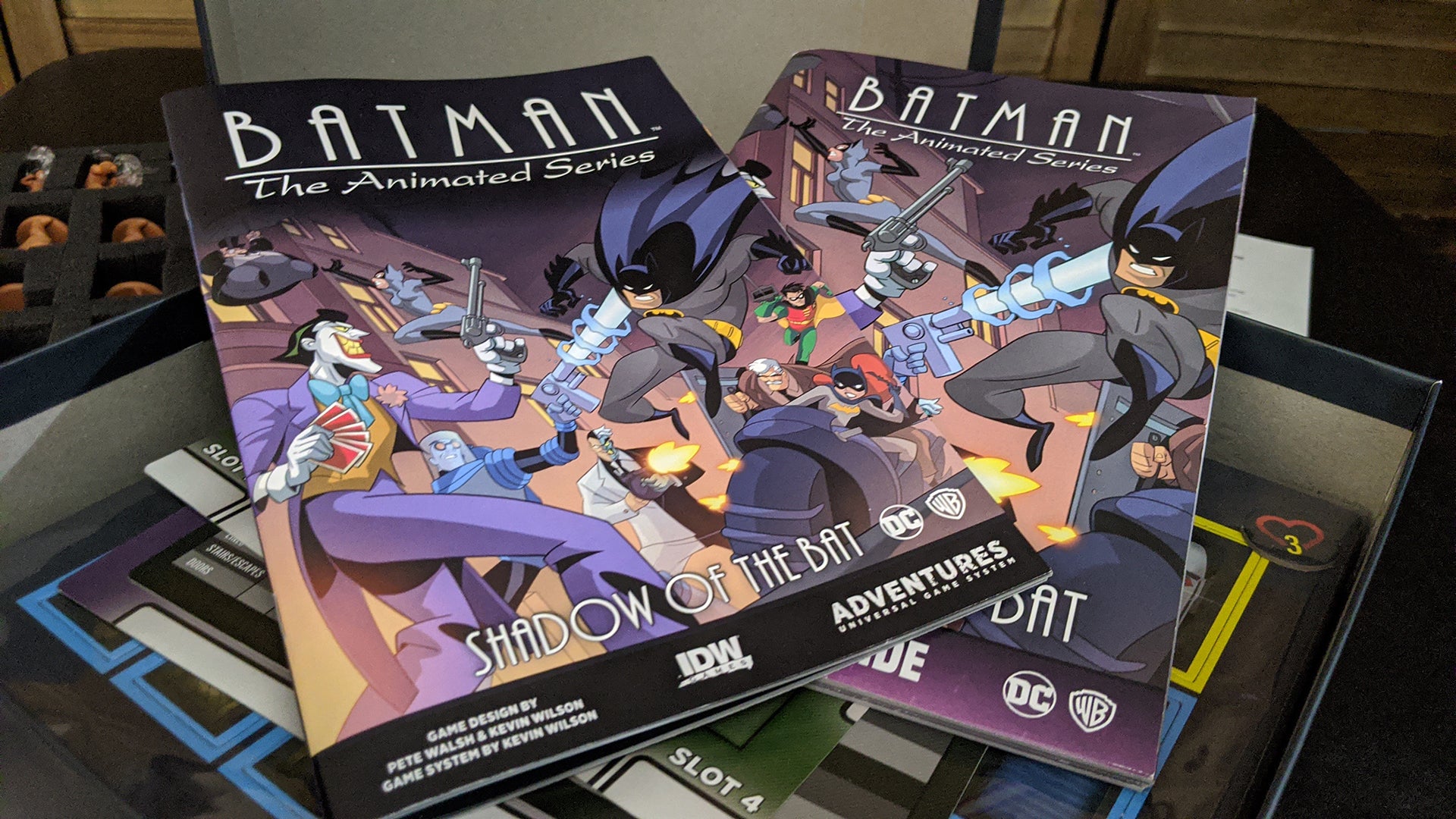 While the game is currently the subject of a funded Kickstarter campaign, which is the way board games get made these days, IDW Games sent along a preview copy of Shadow of the Bat, so I could open it and stare at all the things. This is the game backers will get for a $189 pledge. For another $151 they also get an Arkham Asylum expansion, which I have not gotten my hands on. Note that things like figure materials and paper stock are subject to change and might not reflect the final game.

For example, the included figures in the final version will not be 3D printed in pink, but professionally manufactured PVC plastic in grey, ready for painting. 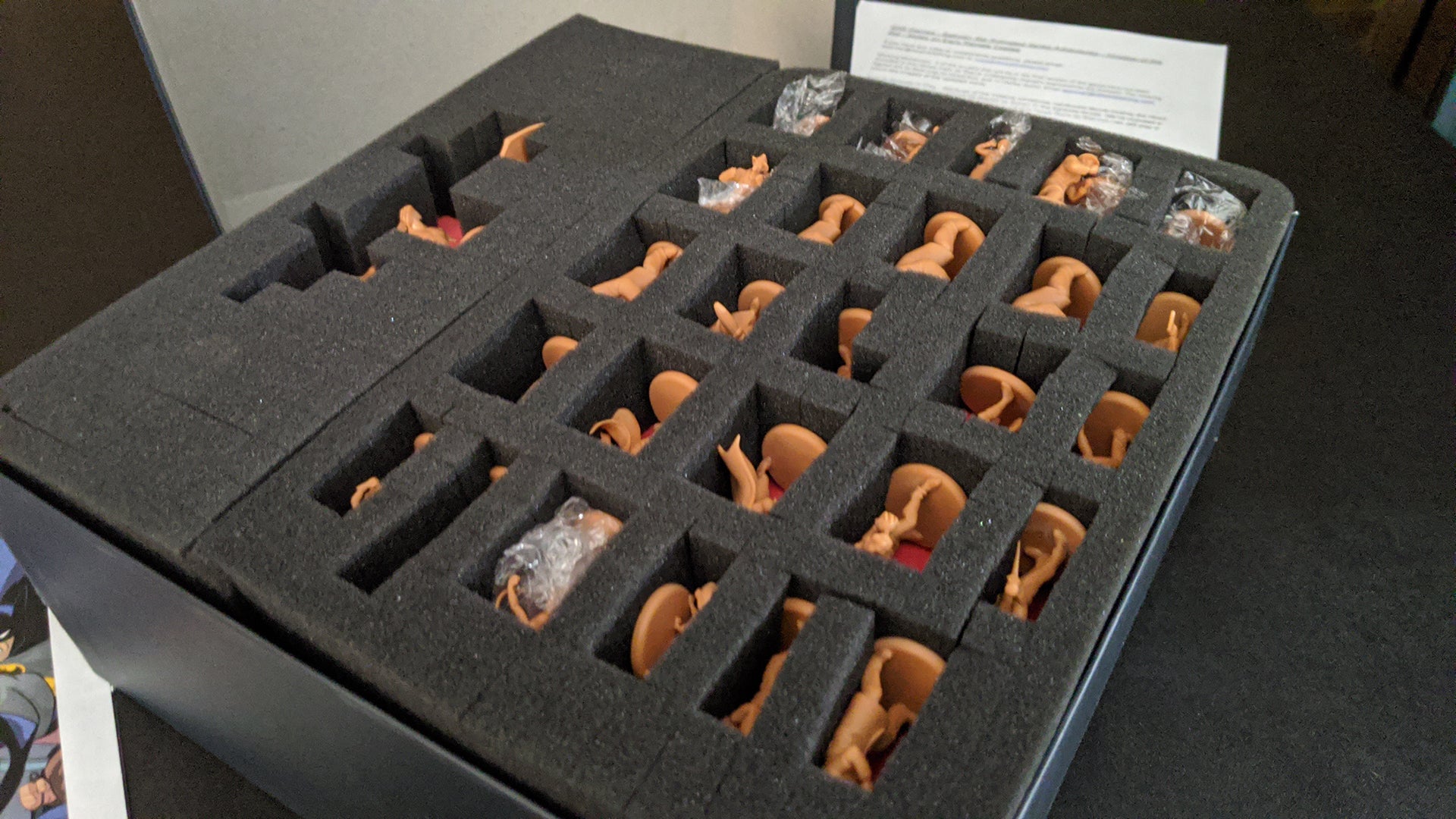 Several of the figures that will come in the Shadow of the Bat board game when it ships at the end of the year were not included in the box, and the figure holder seen here is temporary. These prototypes are fragile—one of my Man-Bat’s wings was broken in the box—but the finished figures will be made of sterner stuff. 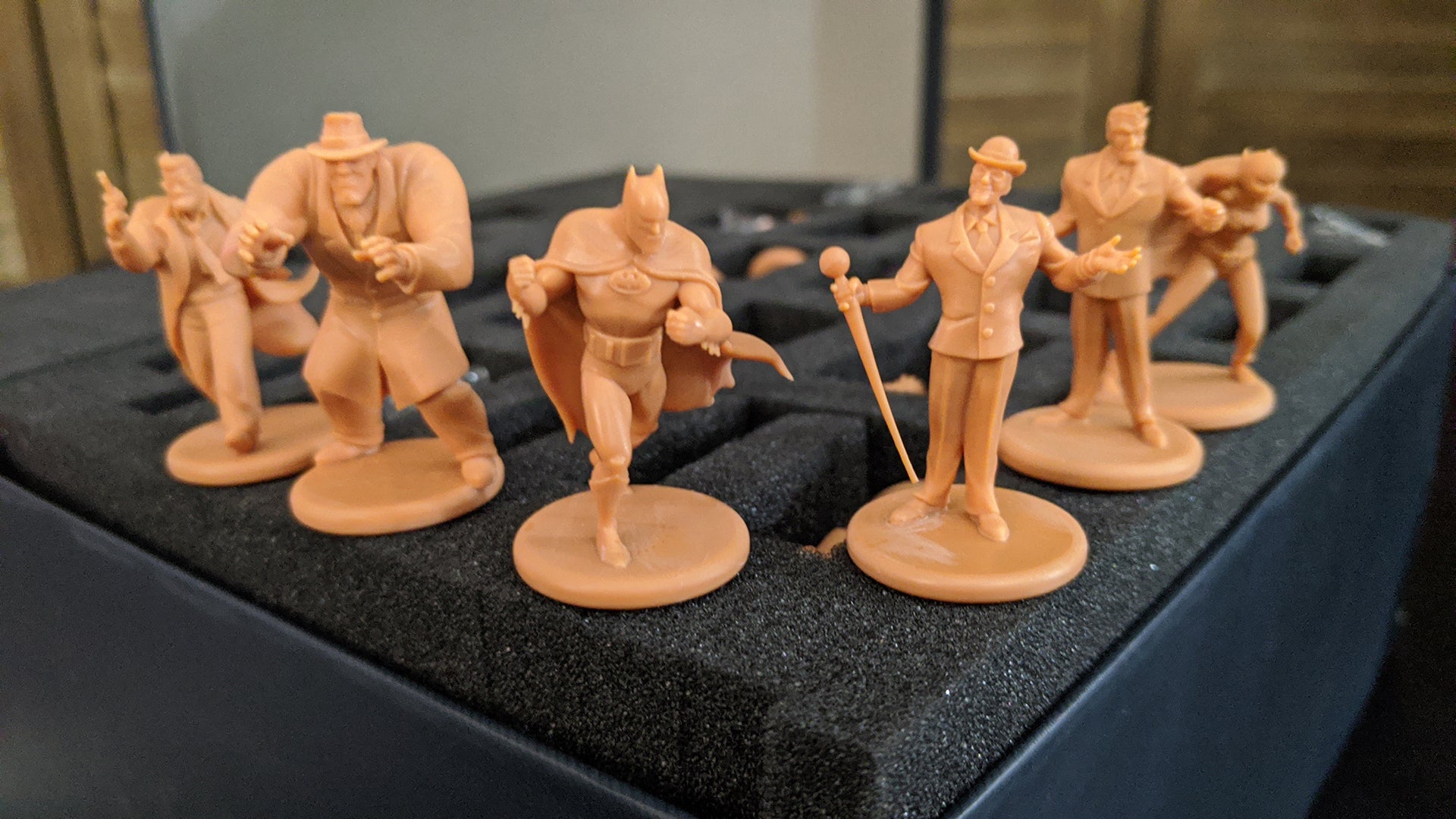 Not too shabby for prototypes, right? I’d break out my paints, but I’d rather wait until I have the finished figures and my chances of breaking them lessen. The finished game will feature 40 total miniatures, including heroes, villains, cops, and thugs, as well as whoever else shows up when Kickstarter goals are reached.

I’m just as jazzed for the figures as I am for all the original art inside the box. Character cards, ability cards, hero skill cards, villain ability cards—so many damn cards. 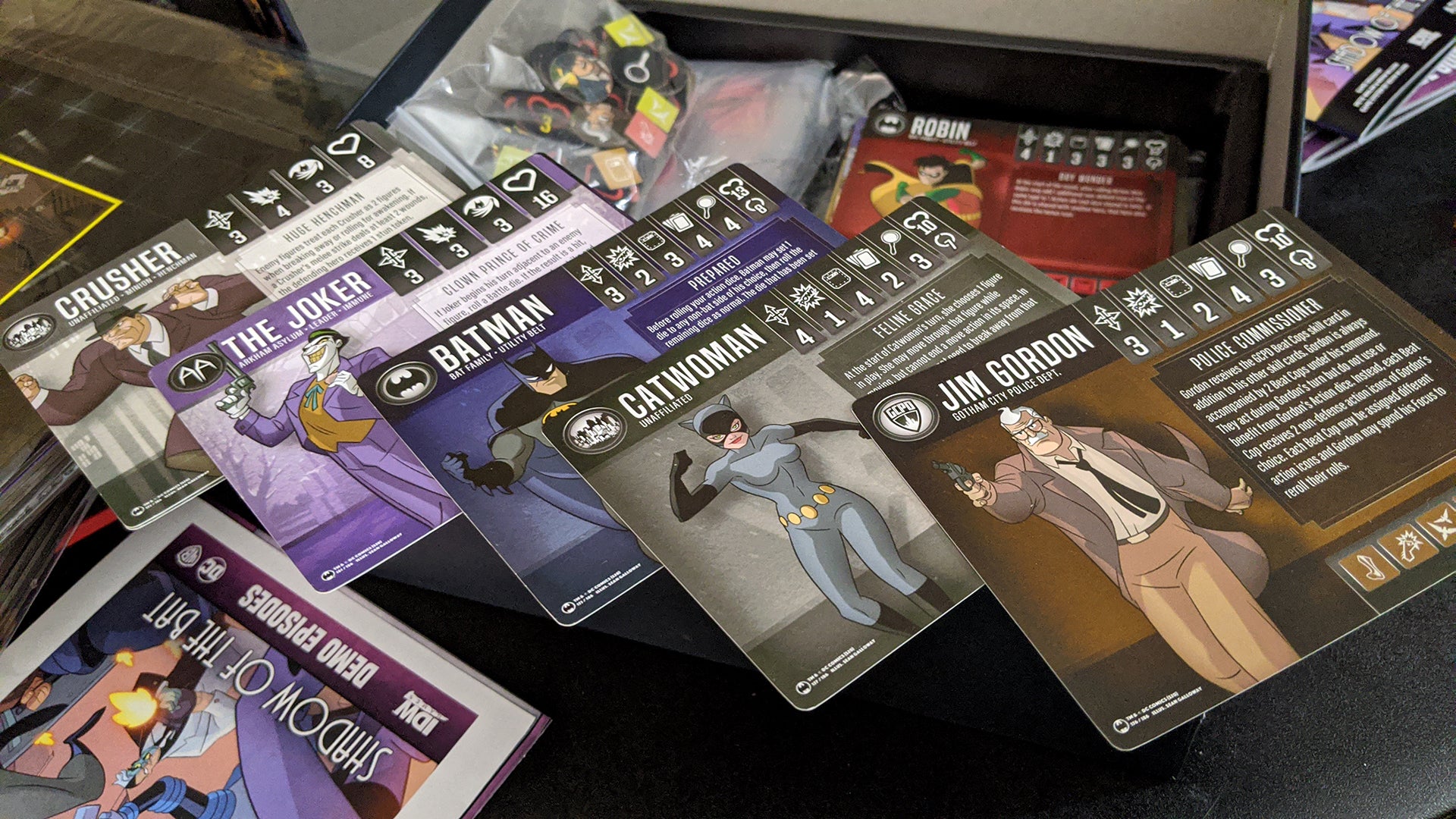 What’s really cool about Shadow of the Bat is it is part of IDW Games’ AUGS (Adventures Universal Game System) tabletop game line, so it’s completely compatible with other games in the series, including Teenage Mutant Ninja Turtles Adventures: City Fall. Batman and the Turtles go together like…bats and turtles. 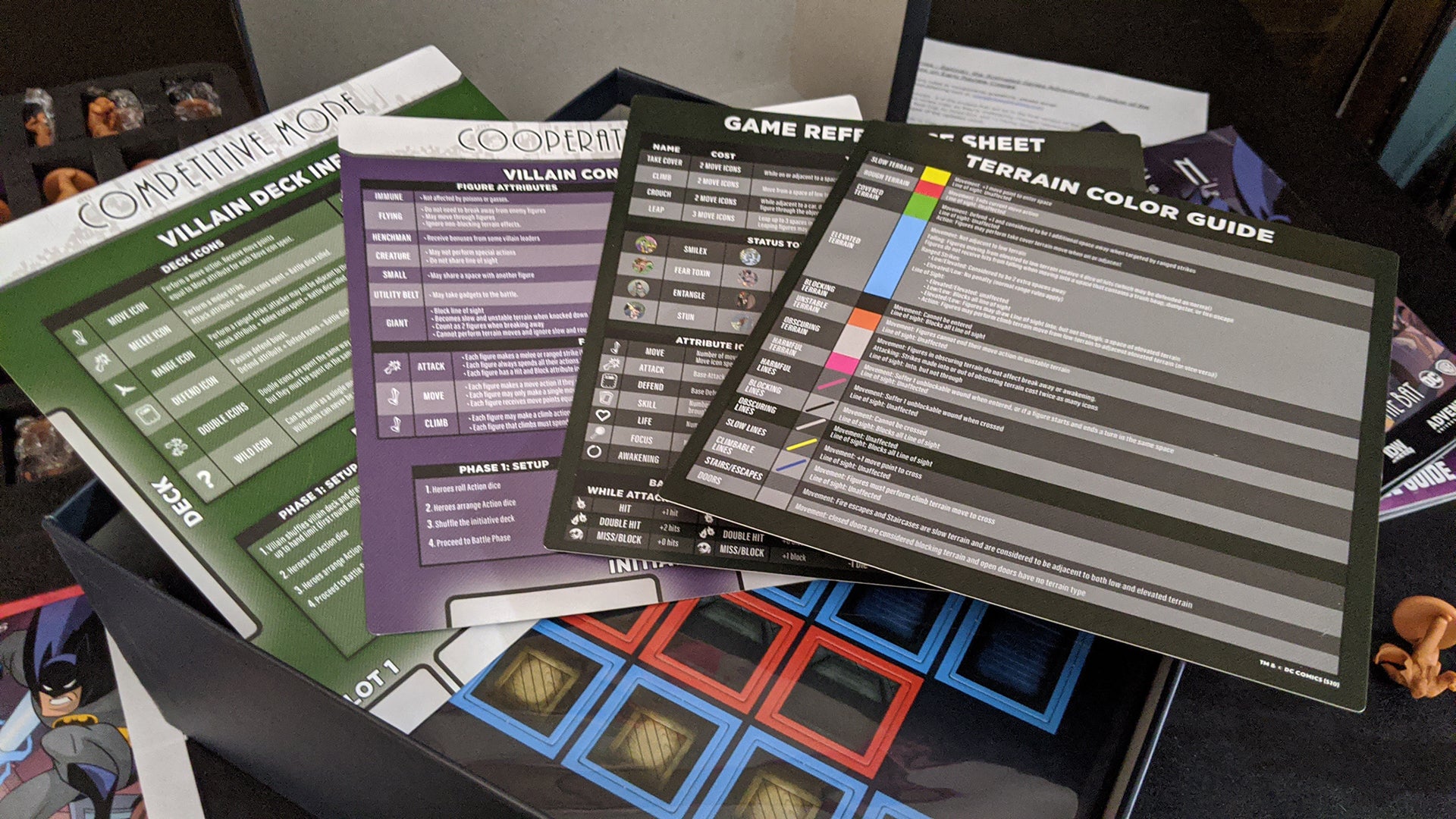 This is just the beginning for IDW Games’ Batman: The Animated Series Adventures. Players can expect regular add-ons, including characters from The New Batman Adventures and story packs from Mask of the Phantasm and Mystery of the Batwoman. 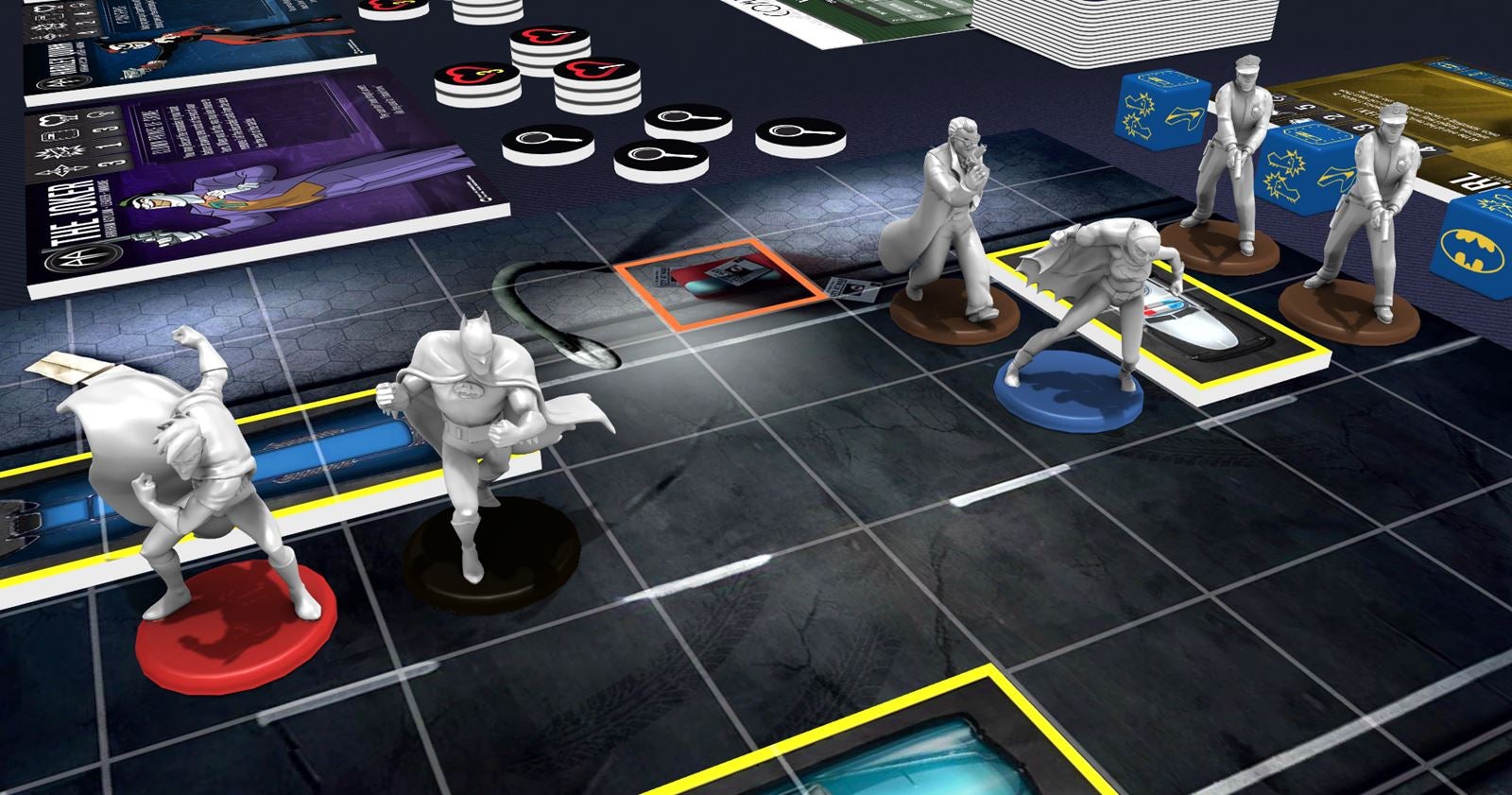 Check out IDW Games’ Kickstarter for more info on the heroes and villains that make up Shadow of the Bat. Even better, head to Tabletopia and play an online demo of the game.