The Weird, Funny Things That Make PokÃ©mon Sword And Shield So Delightful

The idea behind Pokémon games is a weird one. Kids trekking across the country in their quest to collect cute, sometimes dangerous, creatures is strange enough. But the things I saw while playing Pokémon Sword? Hoo boy.

I haven’t played too many Pokémon games. With every new generation of the mainline RPG series, however, I get caught up in conversations about how cute the newest pocket monsters are and my friends’ excitement for them. The same song and dance happened to me with last year’s release of Pokémon Sword and Pokémon Shield on Switch.

After weeks of uncertainty, I caved and purchased Pokémon Sword. Maybe it was the adorable sheep Pokémon, Wooloo, that drew me in, but I’m glad I did. I love when games have unexpectedly dark, unconventional, and humorous sequences. These bizarre moments are the reasons why I love games like The Legend of Zelda: Breath of the Wild.

One can imagine how pleased I was to discover that Pokémon Sword is full of strange creatures, settings, and experiences. Friends have told me this is true of Pokémon in general, so I suppose it’s not too surprising. After all, many of the Pokémon themselves can be terrifying and brilliantly odd at times. Here are a few of the best, weird moments and things I witnessed as I ventured through the tall grass (and more) of the Galar region. 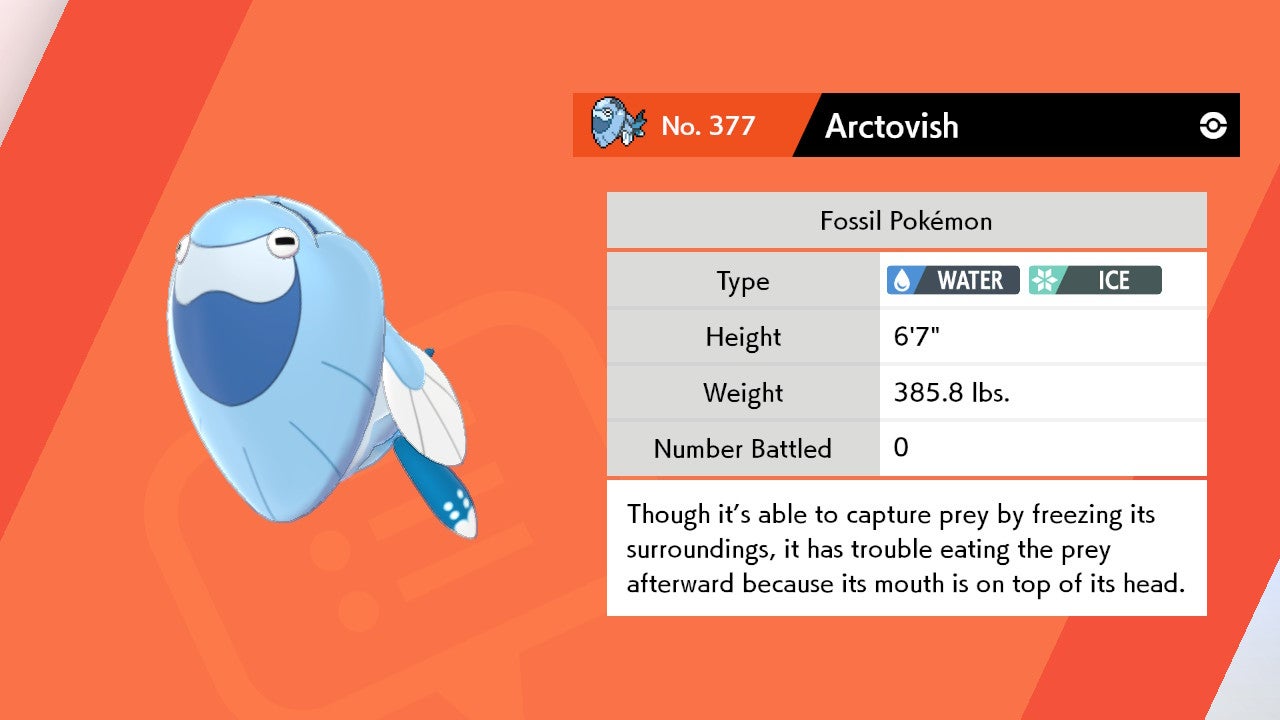 Any game that allows me to create a living monstrosity from fusing fish and dragon fossils together is my kind of weird. There’s no real fanfare or satisfactory explanation as to why this is possible when you meet the Fossil Restoration scientist, Cara Liss, on Route 6. Making sense of her hand-waving explanation is a mystery. As Liss says, “Fossils in Galar Region are broken into top halves and bottom halves for some reason, huh.” Liss continues, “Strangely, no matter which top and bottom you combine, they can be restored together.”

I handed over my fossils, and in the next moment, I became the unwilling caretaker of a conglomeration of nightmares. When I received my unholy abomination, Arctovish, I banished it to the storage box, never wanting to look upon its face (which, uh, took me a moment to understand) ever again. 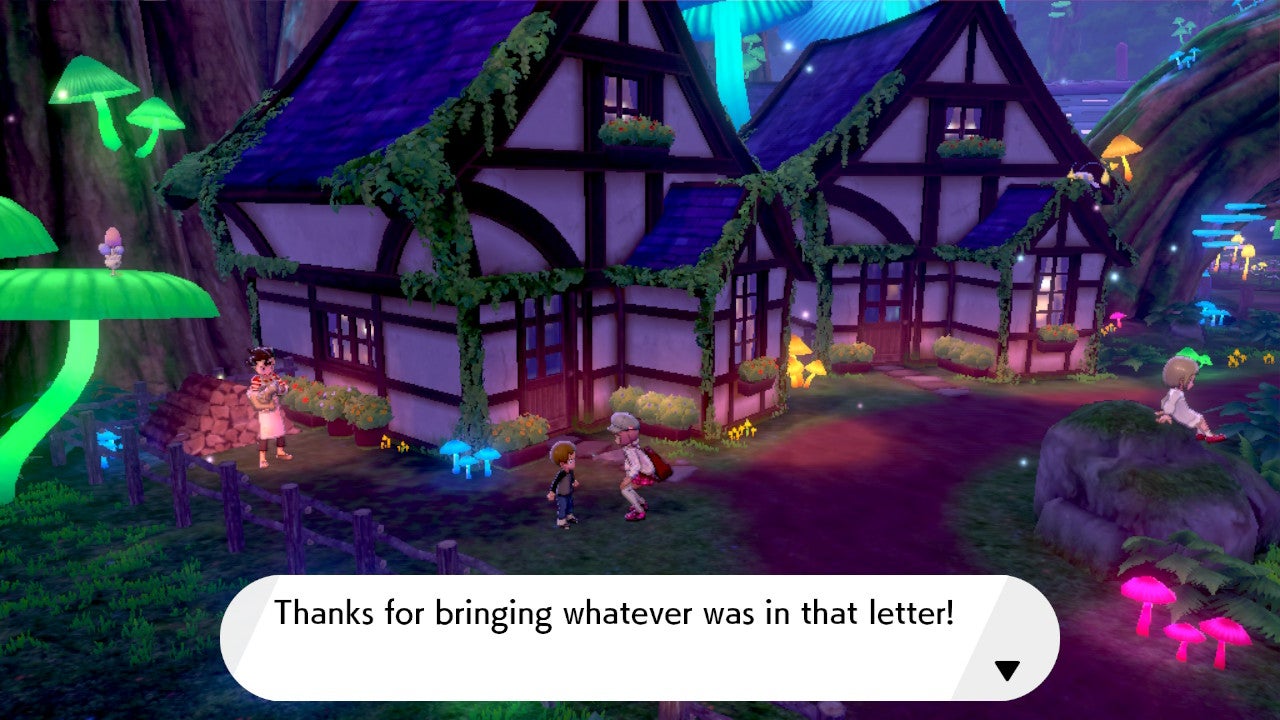 In the city of Hammerlocke, a young girl asks you to deliver a letter to her friend, Frank. All the player knows about Frank is that he lives in the village of Ballonlea. After collecting the letter, your character notes that it seems to be rather old. Strange, but ok. Upon arrival at Ballonlea, you discover that Frank is a grandad. Things take a turn for the creepy when Frank recalls a fight he had with a childhood friend (you guessed it, the same girl you received the letter from). He moved away soon thereafter and never saw her again. It was about that time my low key freak out began to grow.

Delivering letters from ghosts was not what I signed up for when I left home to become the next Pokémon League Champion. Did I deliver an apology within the letter? A curse on poor unsuspecting Frank with his bevy of grandkids!? Well, I checked in on him and he seemed ok. In fact, his grandson thinks Frank is more than ok.

The sad implication is that the girl died at a young age and that peace with Frank was made upon his receipt of her letter. It’s probably best not to question it any further.

If You Thought Pokémon Are Dangerous, Wait Until You Meet The Gym Leaders 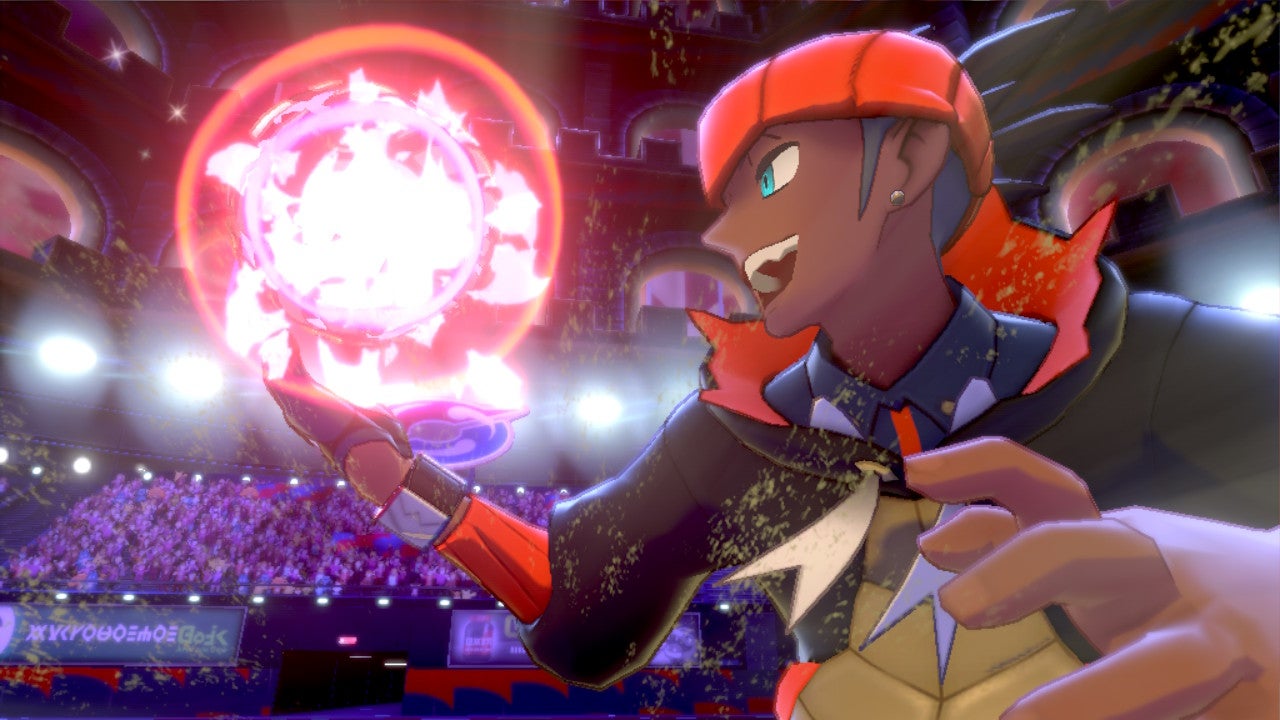 On more than one occasion, during the heat of a Pokémon gym battle, I had a Gym Leader try to taunt me. It was usually a rallying cry uttered when they were down to their final Pokémon. A desperate attempt to make me feel like they were about to kick my arse. I never took them seriously because my Rillaboom (#GrookeyGang4Lyfe), Corviknight, SirFetch’d, Boltund, Toxtricity, and special guest (reserved for a powerful Pokémon with a type advantage) were pretty unbeatable.

What was shocking, however, was realising some of the gym leaders displayed a complete disregard for life by threatening to use their Pokémon to “…send everyone in the stadium flying!” These words were delivered with such conviction, such malice, that I believed they truly didn’t care about their cheering spectators in the bleachers. Human life be damned! Luckily for everyone, I would often Dynamax my last Pokémon, commanding them to send wave after wave of special attacks zooming across the stadium to defeat my rivals. Lucky for everyone except the people in the stands behind my opponent, that is. I mean, it’s possible a few stray energy blasts took out some onlookers. That’s a risk you take when you attend a Pokémon event. Right!? Right”¦? 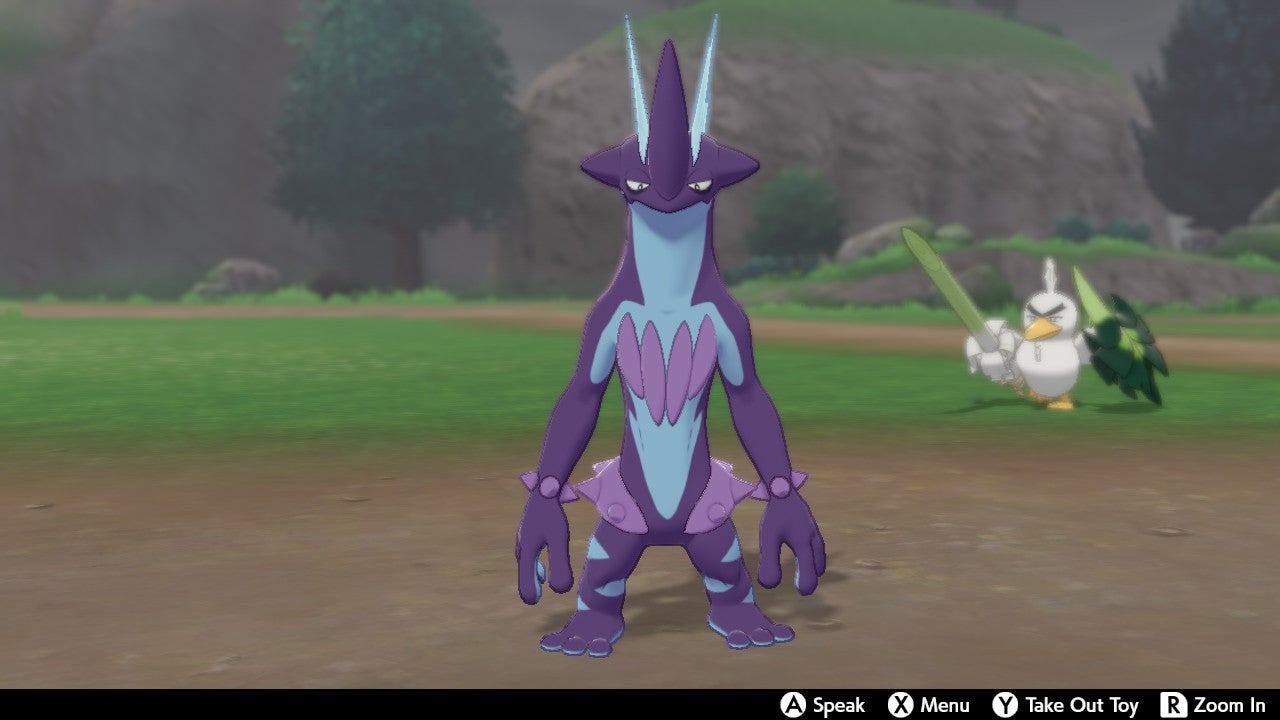 There are a ton of messed up Pokémon in the series as evident by their amusing, often frightening, information summaries in your Pokédex. And while Toxtricity isn’t close to being the weirdest, it’s certainly one that intrigued me the most.

When I was given an adorable purple dragon, Toxel, for visiting a Pokémon nursery, I was overjoyed. It was so cute! And then it evolved. It evolved into a hideous purple beast with vertical fleshy bits on its chest. Toxtricity strums these bits like a guitar to issue attacks. The visuals of it are extremely gross and skeeved me every time. But you know, I grew to love my Toxtricity.

Whenever we’d go camping, which is all the rage in Galar despite how dangerous it seems to pitch a tent in the middle of nowhere, my Toxtricity seemed a bit out of it. Maybe it was the way it slowly turned around, like a zombie, to play fetch. Or how it would pick up the ball with its fleshy chest bits and refuse to relinquish it when I asked. Whatever the case, I loved this Pokémon, even if he still scared me from time to time.

I especially cringe-enjoyed rolling into camp one day and finding him right up in my face as I entered. It’s one of my favourite pictures I took on my journey. And now you can all cringe-love it too. 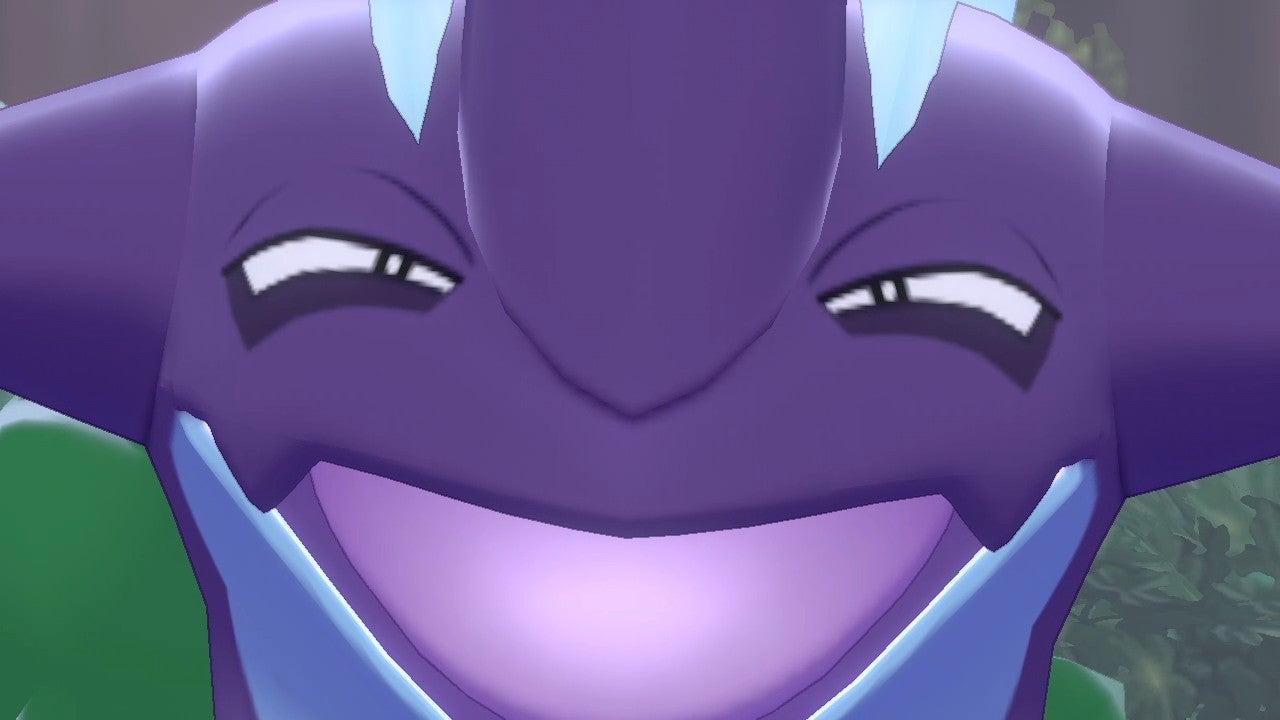 I Totally Get The Curry Obsession, Minus The Salad Part

Pokémon and trainers are obsessed with curry. Who can blame them? Curry is amazing. Pokémon compatible for being curried into a meal is…something. But what I don’t understand is the option of dumping an entire bag of salad into the curry pot.

I completely understand having salad on the side. Cooking lettuce in the curry? It confused me every time I made it for my Pokémon at camp. Of course, I’m more accustomed to West Indian curry than any other type, so adding salad mix in the curry was new to me. I know curried chicken salad is a thing, but that is slightly different. I’ve also eaten my share of Japanese curry as well but I don’t think I’ve ever seen this. This could be due to the fact that I always go for the pork katsu and sausages though. Please let me live in ignorant bliss.

Magically, the end result of the salad curry in the games shows that the salad appears on top and not cooked in. I still find the whole cooking method a little bit suspect but ok, Pokémon Sword and Shield. You win this round. 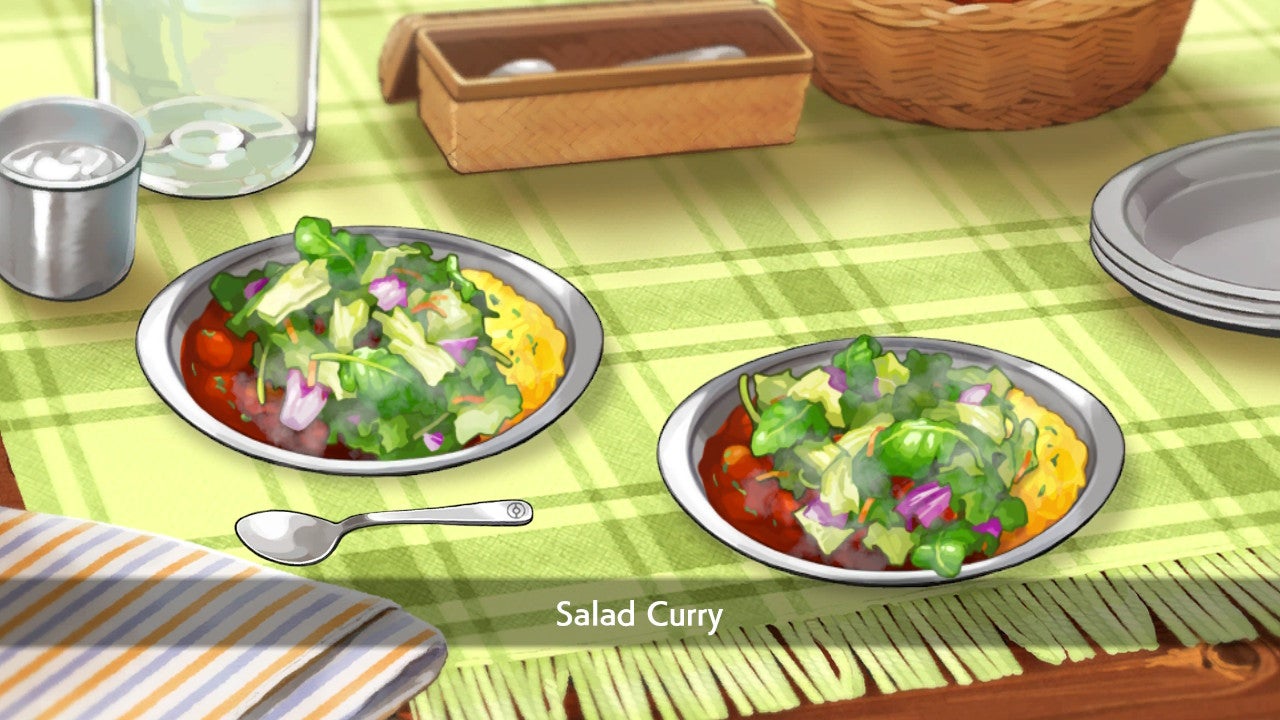 I’ve enjoyed my time with Pokémon Sword thus far, and that’s mainly due to just how weird the game can be. I haven’t caught every Pokémon but I look forward to finding what other oddities await me in Galar. Maybe I should play the Pokémon series more often.