While we live in an age of superhero mania, Archie Comics’ exploits in Riverdale have managed to stay relatively distant from the spandex-clad hype—much more content to dabble with witches, werewolves, vampires, and the most fantastical topic of all, high-school drama. But they’re going to riff on it by bringing back a classic character from its archives, with a twist.

Super Duck first hit shelves back in the ‘40s as a lighthearted pastiche of heroes of the Golden Age of comics like Superman—but now he’s back, and not only have superheroes changed, so has Super Duck, with his newest series giving us a more adult-oriented take on the character. 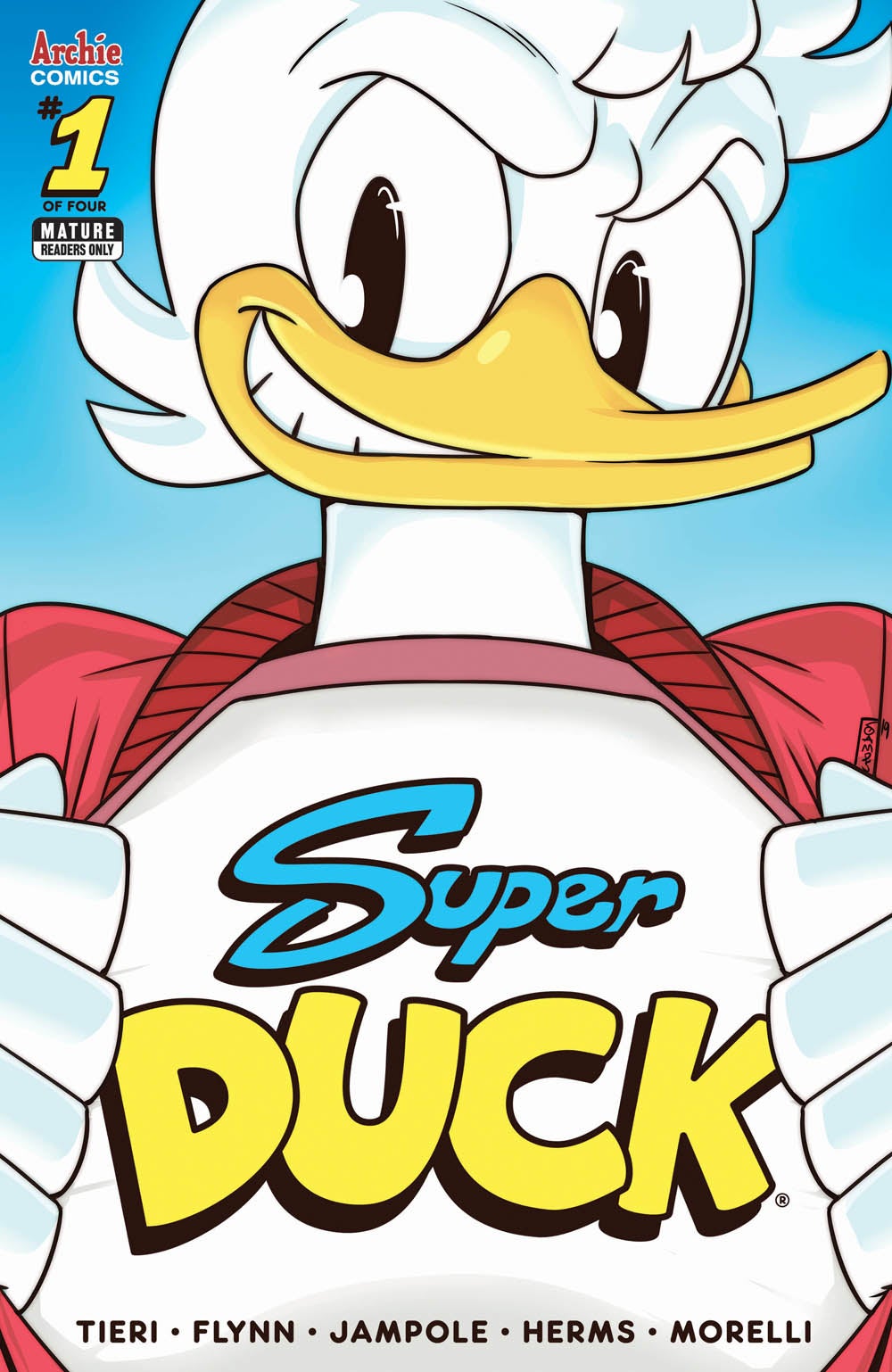 Check out the main and variant covers for Super Duck #1. 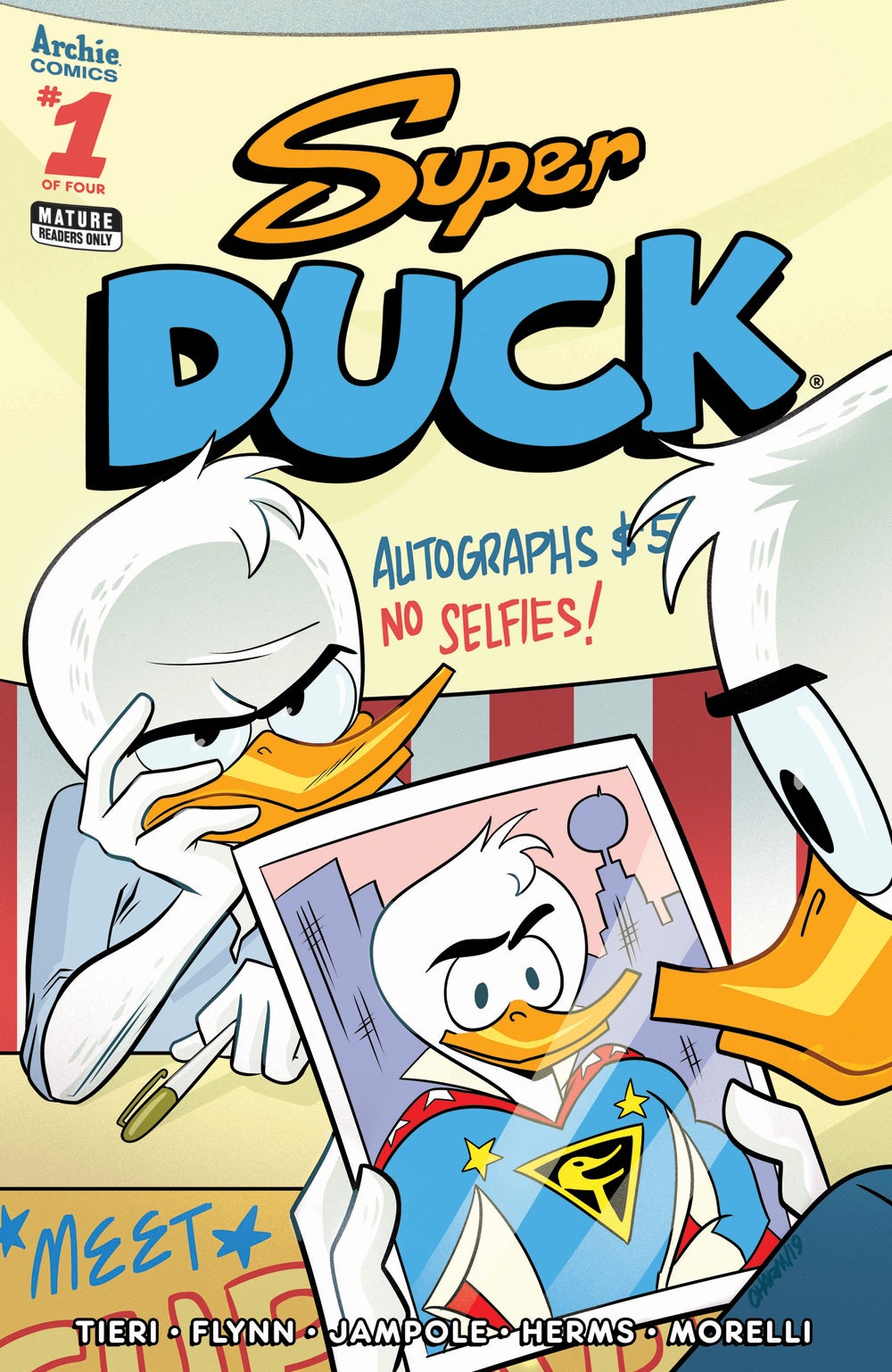 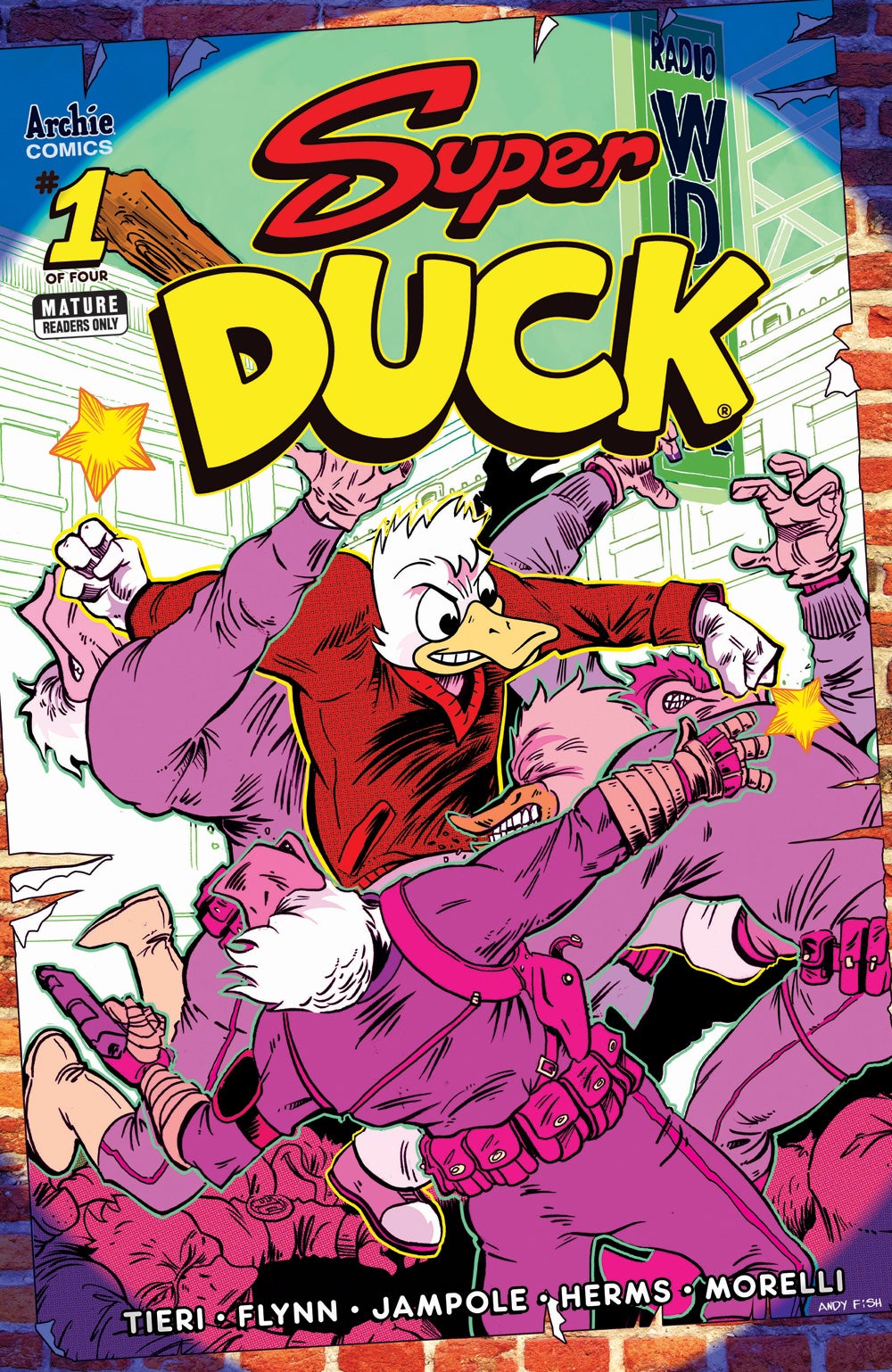 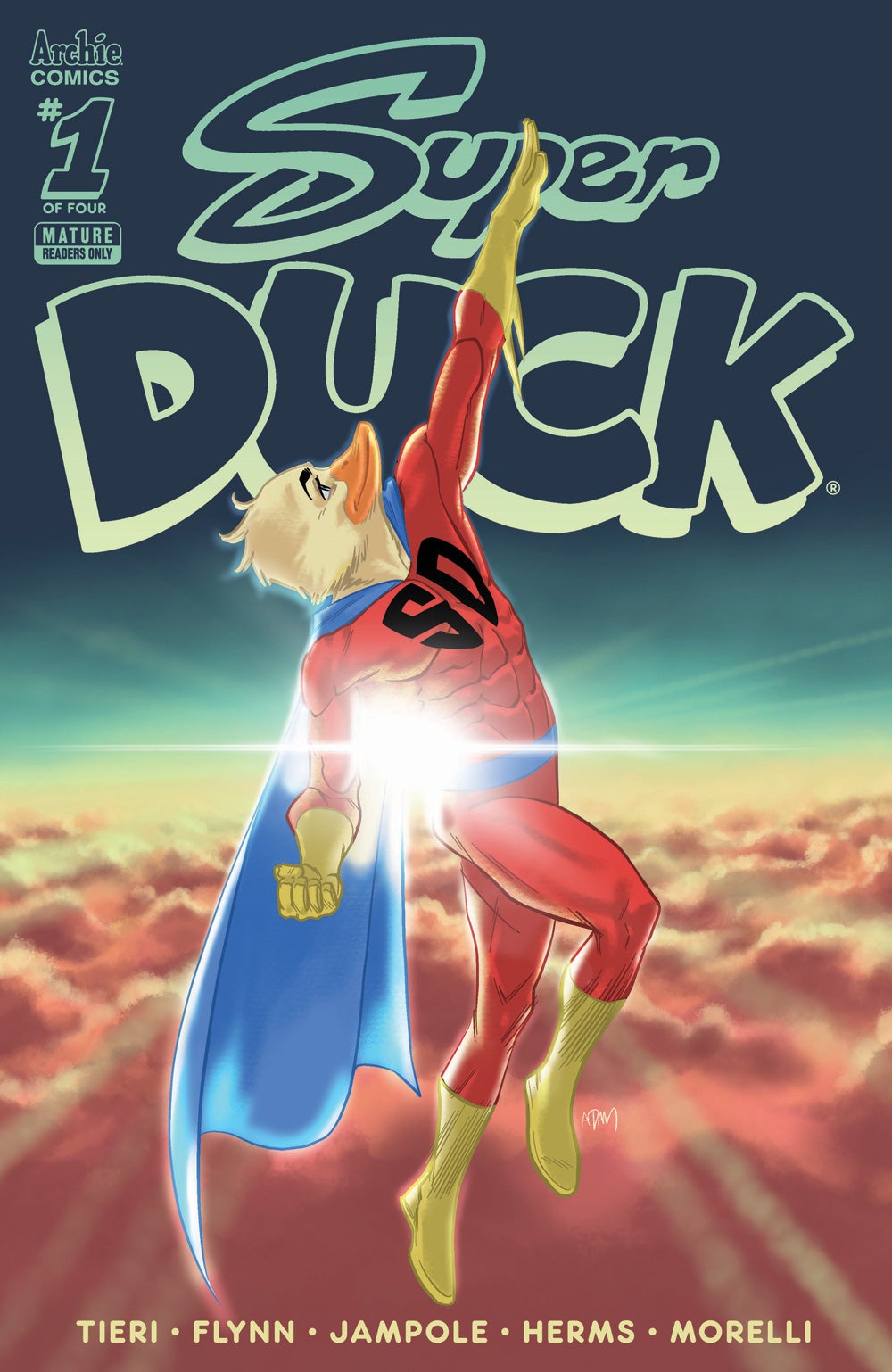 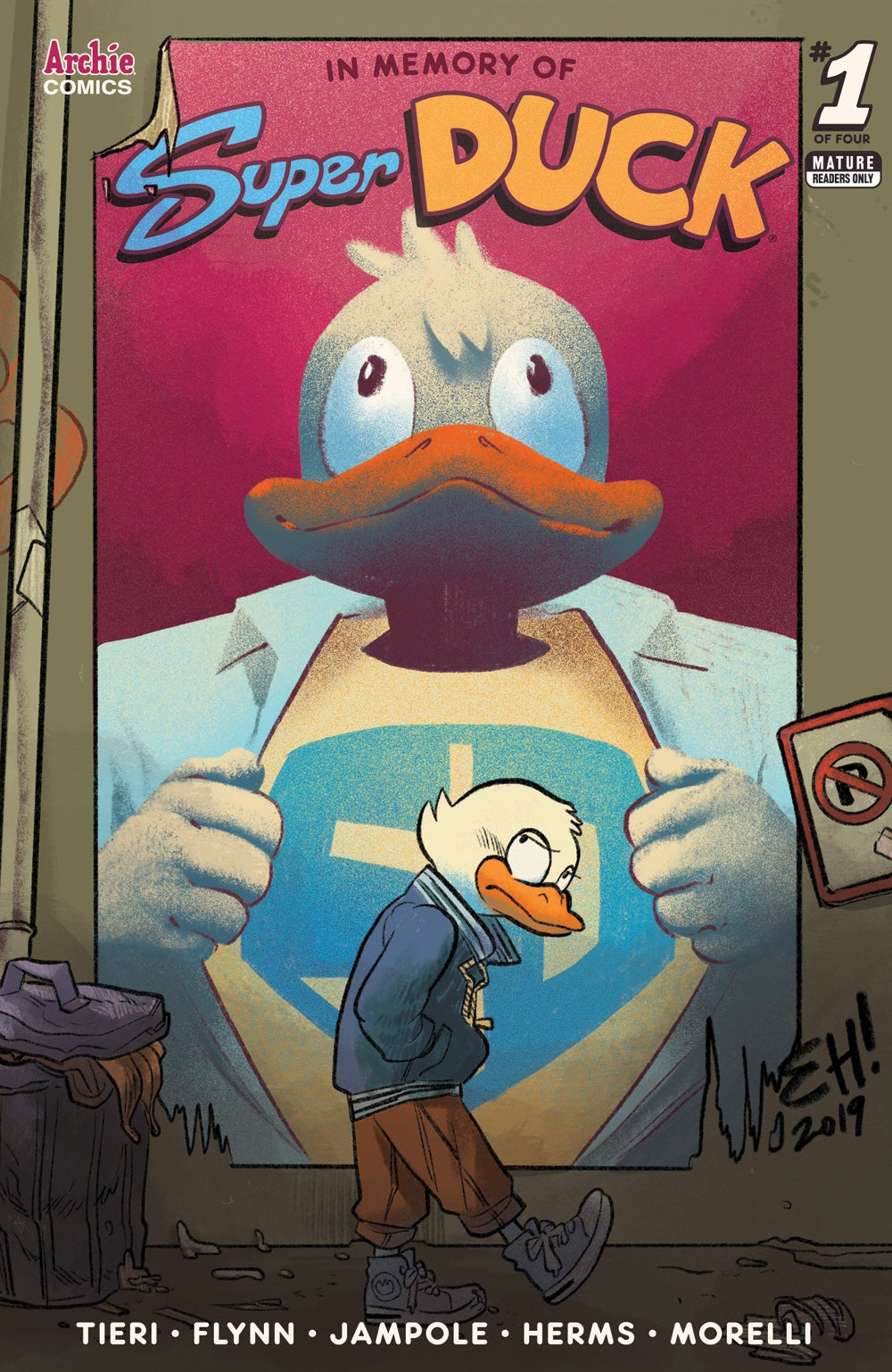 Penned by Frank Tieri and Ian Flynn, and with art by Ryan Jampole, Matt Herms, and Jack Morelli, the new Super Duck sees our titular hero fallen on hard times after a long career zapping bad guys with laser eye-blasts and punching up his archrival, the sinister billionaire Dapper Duck. Three years after hanging up his cape though, Super Duck’s heroic activities have boiled down to making a quick buck signing autographs at comic conventions—until a former rival of Dapper Duck approaches him with a dangerous bodyguard offer, leading to him picking the cape up again for all the wrong reasons.

“Super Duck has been a fun property to revitalize,” Flynn told Gizmodo exclusively over email. “I think folks who are used to my all-ages work will be surprised how much more adult this project turned out. There’s a lot of physical comedy and big, blockbuster action in the first issue thanks to the brilliantly talented art team of Ryan Jampole and Matt Herms. From there we’ll be following Super Duck’s staggering, stumbling recovery from his fall from grace.”

While the four-part miniseries is set primarily in a present where Super Duck himself is out of the hero game, the series wants to riff on cape comics in more ways than just its hero’s grim fall from grace. “This rendition of Super Duck takes its inspiration from the original Golden Age comics but definitely plots its own course,” Flynn continued. “Each story will have a bonus retro-styled story to poke a little fun at a very different era of comics.” You can see a little more of what to expect beyond that in our exclusive preview of Super Duck #1 below!

This new, adult-oriented approach to Super Duck marked a bit of a change from Flynn’s usual work for Archie, but created a mutually beneficial partnership in teaming up with fellow Archie stalwart Frank Tieri as co-writer. “Frank’s been the captain of this ship,” Flynn said of his partner. “He plotted out the story and he puts his spin on the scripts once I’ve taken the first pass at them. He also keeps most of my jokes, so he’s a stand-up guy!” 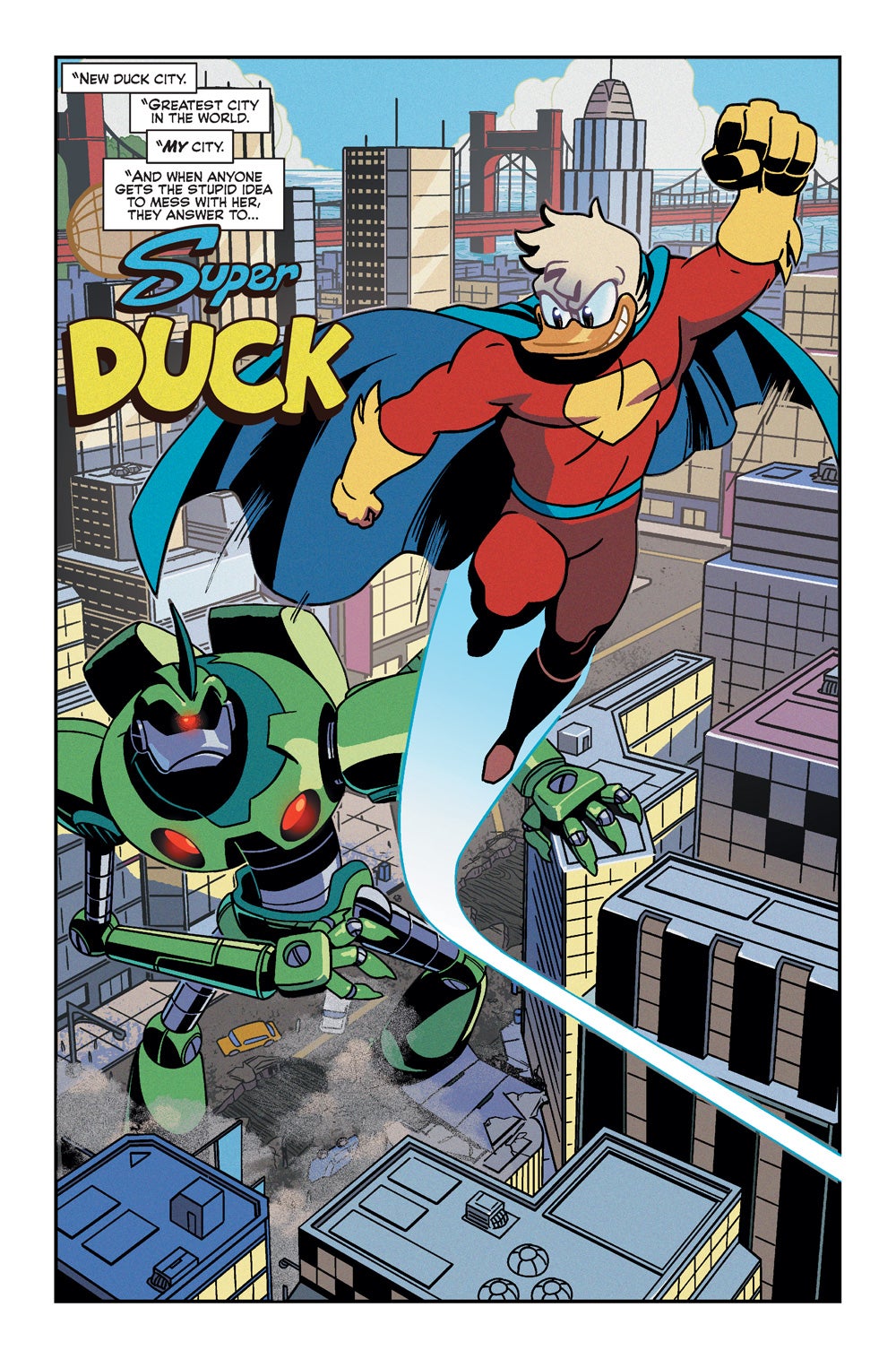 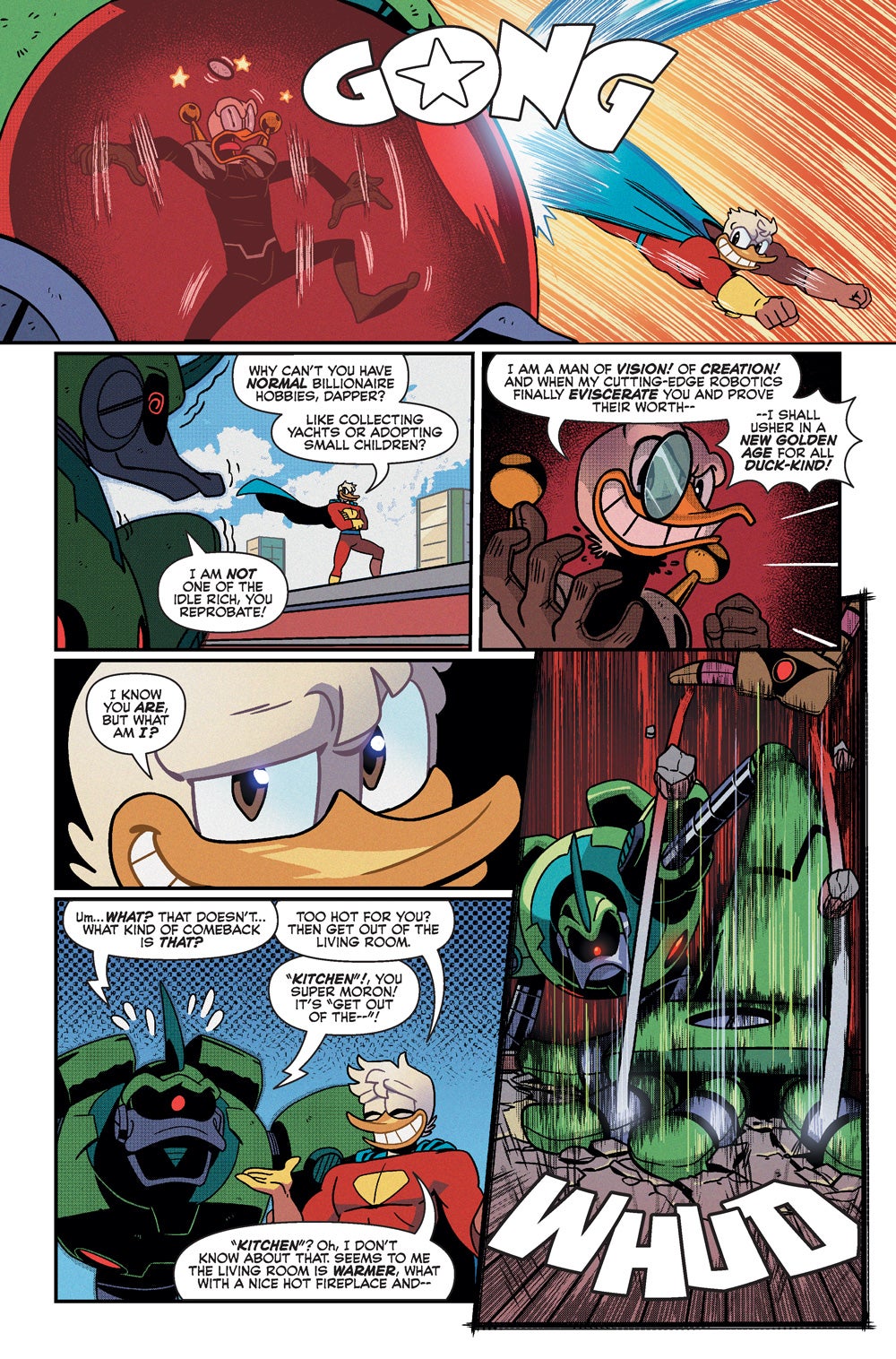 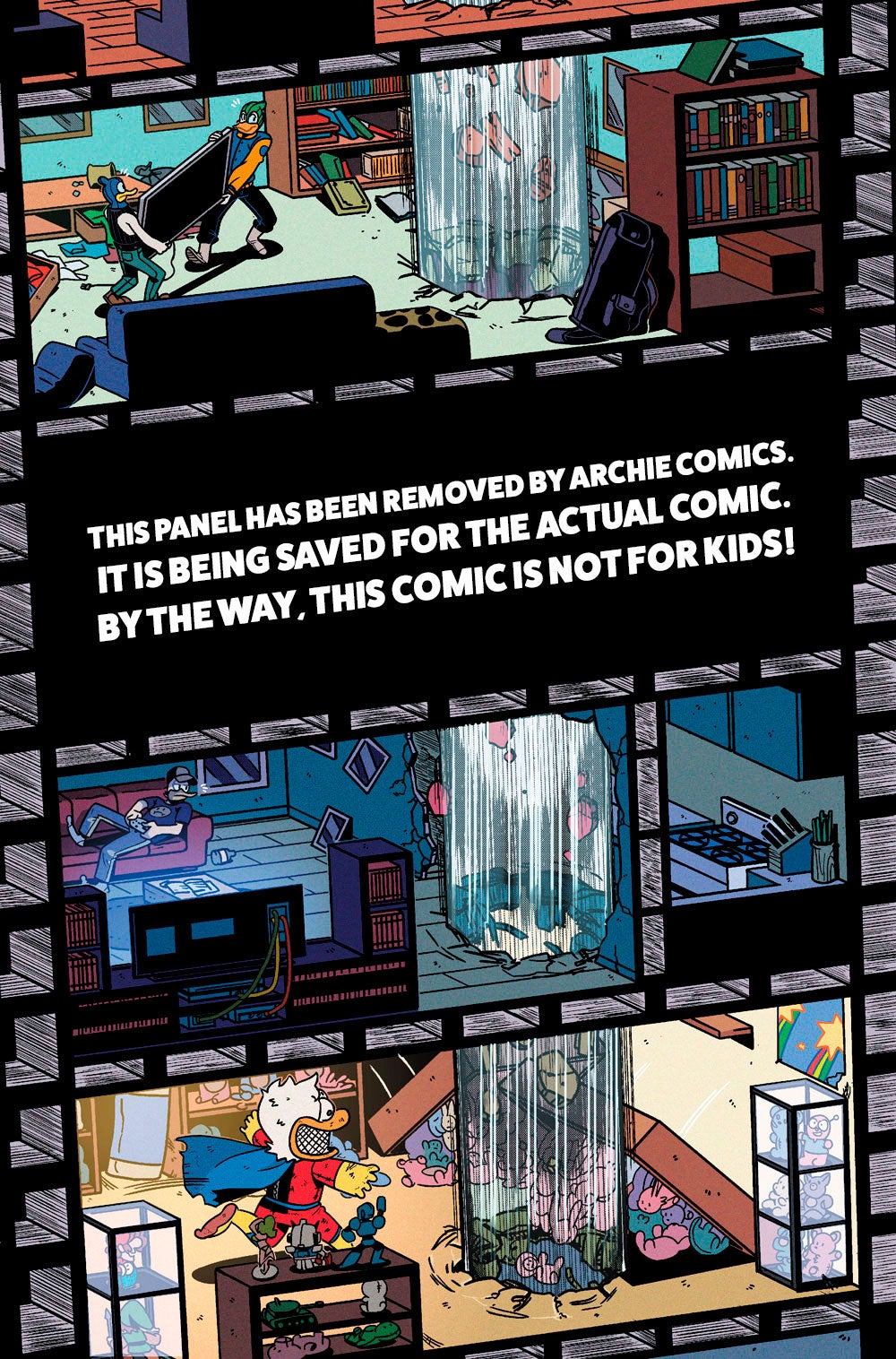 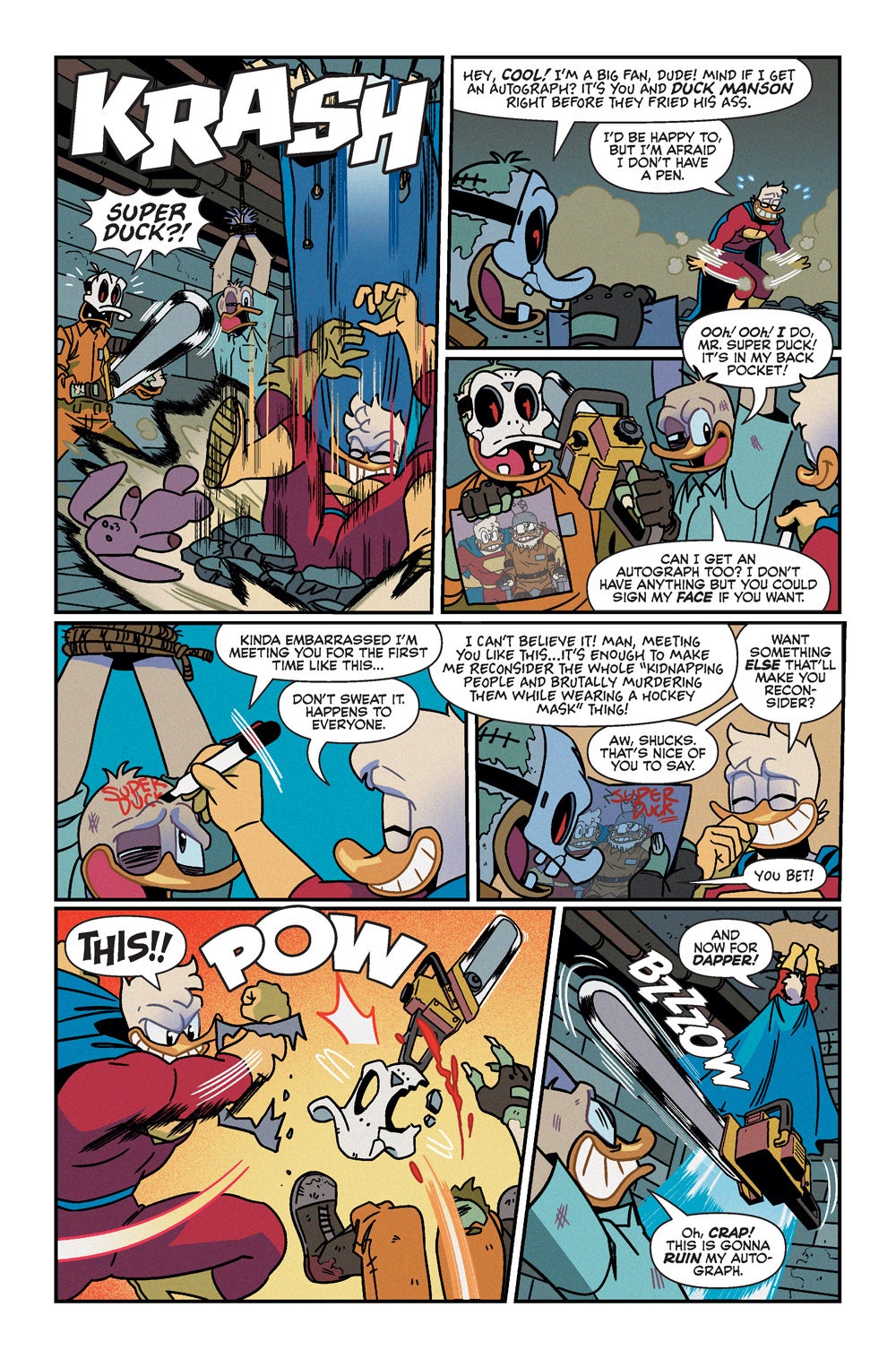 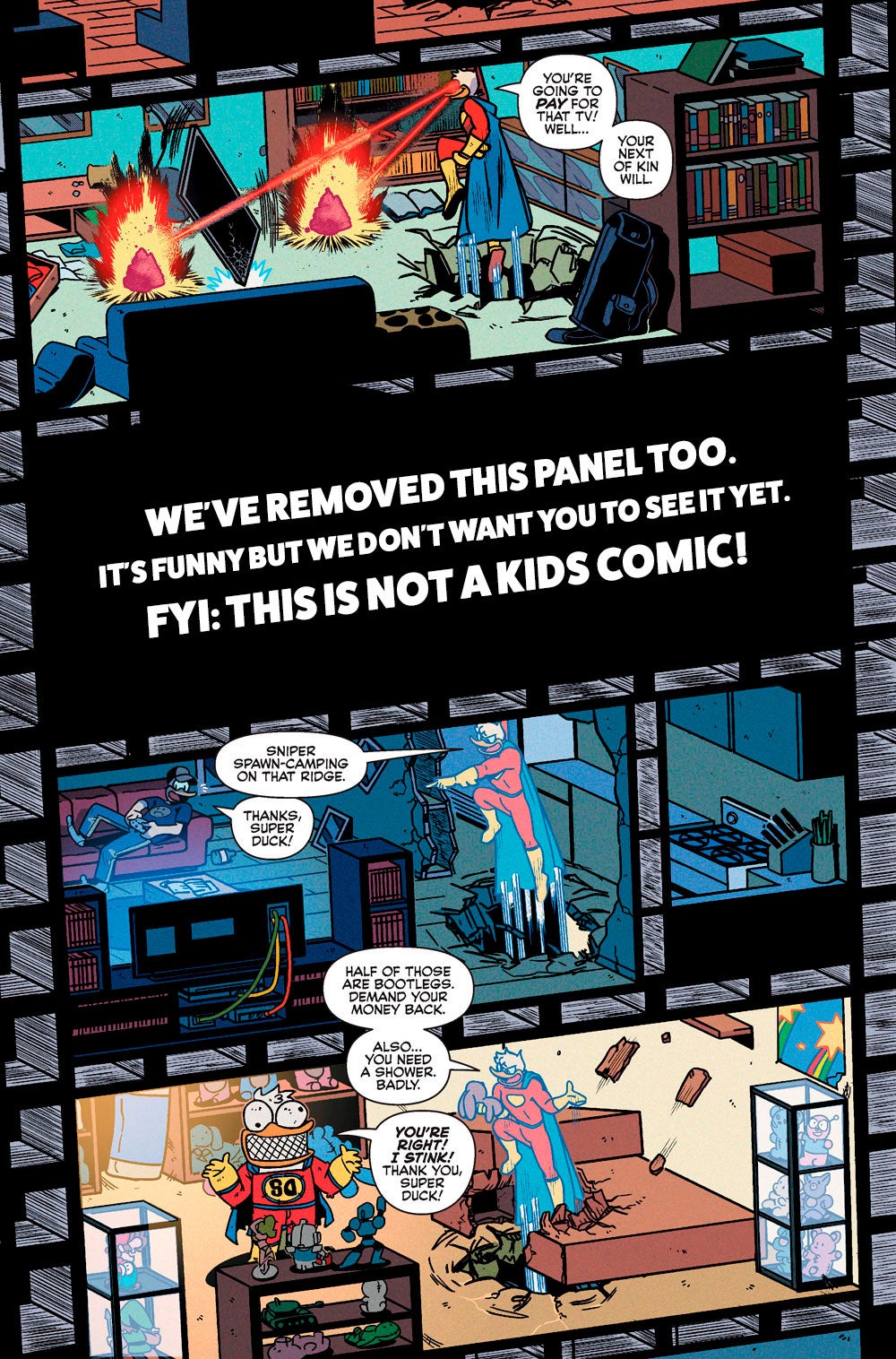 “What Ian said. Especially the part about me being a stand up guy. I really am, kids! No, really,” Tieri jokingly added over email. “Ya know, you wouldn’t think we’d be able to mesh our two sensibilities— he’s an ‘all ages’ guy and I’m very much not—but we somehow actually made this whole crazy ducking thing work. (That’s right. There’s a lot of duck jokes. Duck off if you don’t like it.)”

As you might be able to tell by our headline, we definitely don’t mind a silly duck-swear joke or six. And Super Duck seems like it’s going to deliver heavily on that front if this preview is anything to go by. “It especially helps when you have talent like Ryan and Matt in your corner, art wise,” Tieri noted. “[They] really got the gags and even added to them, producing an end result where the humour’s more Deadpool than Donald, but still has the DNA of the classic character. In short, a ducking good time will be had by all, people! (OK, I’ll stop now.)”