Bow Before The Beauty Of My Custom-Painted Joy-Cons

In my never-ending quest to make my consoles and controllers look uniquely pretty, I turn to Colorware, the company that’s been painting game hardware for two decades. They do custom colour Joy-Cons for $US150 ($254) and special limited edition designs for $US200 ($338), which look and feel amazing.

There’s nothing wrong with spending $US70 ($118) on a pair of retail Joy-Cons in officially sanctioned Nintendo colours to give your Switch a little extra oomph. I just prefer a lot of extra oomph: My Switch dock has a wood-etched image of James K. Polk on the front. I murdered at least one Joy-Con turning my original Switch into a watermelon wonderland. When it came to sprucing up my second Switch after passing on the original to my children, I wanted something really fancy. Something like these. 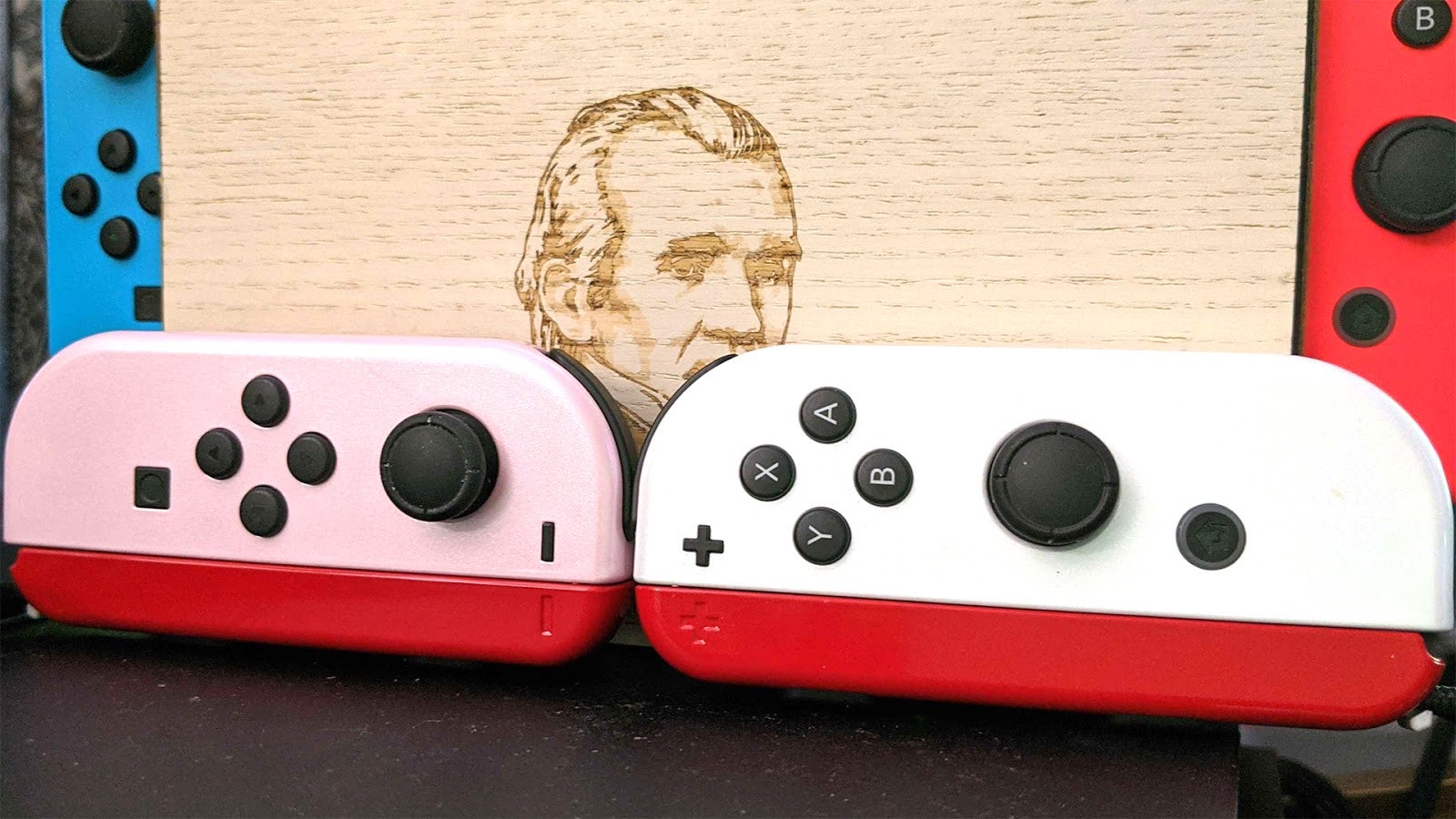 On the left we have a metallic colour called “Glamor Gloss.” On the right, metallic “Diamond Gloss. The bumpers colour, which can be chosen individually on the Colorware website, is “Candy Apple Gloss.” That’s three of the 32 different colours Colorware offers in both matte and gloss. 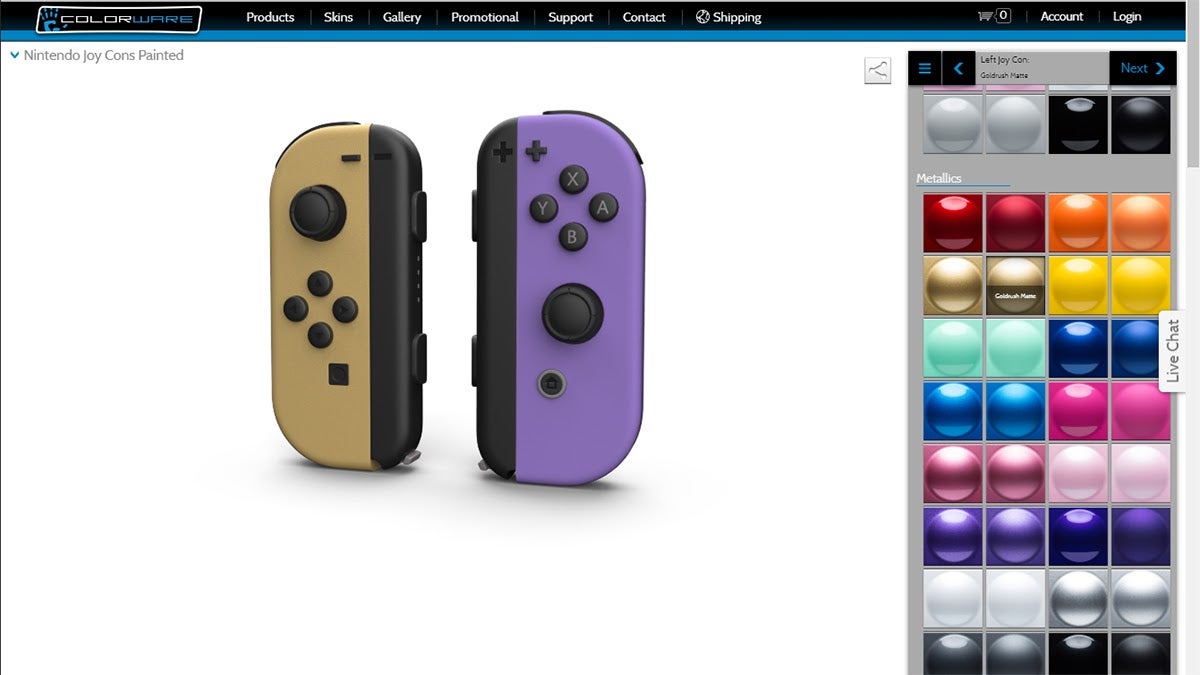 Once colours are selected, Colorware takes a pair of official Nintendo Joy-Cons and paints them. These are not flimsy third-party shells—they are Nintendo hardware with a little something extra. Compared to unpainted Joy-Cons, they feel slightly thicker and quite smoother. Due to the thickness of the added paint they fit to the Switch more snugly, making the system feel more solid in handheld mode. The bumpers are lovely but incredibly tight, which is fine because eventually I will lose them in a drawer. 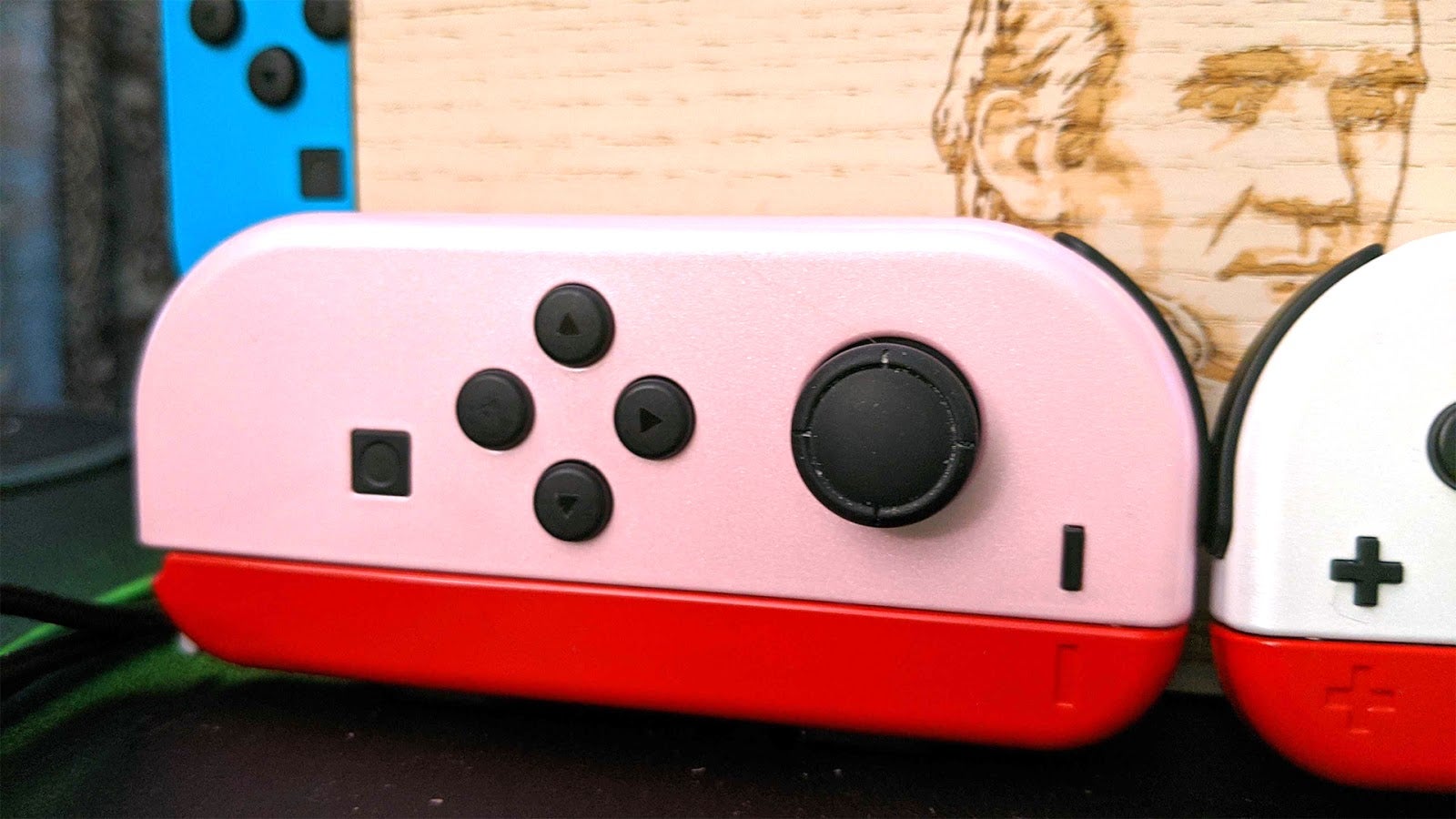 If choosing between a ton of different colours and gloss levels is too difficult, Colorware also offers a variety of limited edition Joy-Cons, as well as fully-painted Switch consoles. I am in love with their 16-bit Switch, its colours reminiscent of the Super Nintendo, even if it costs $US600 ($1,014), double the price of an unpainted console. 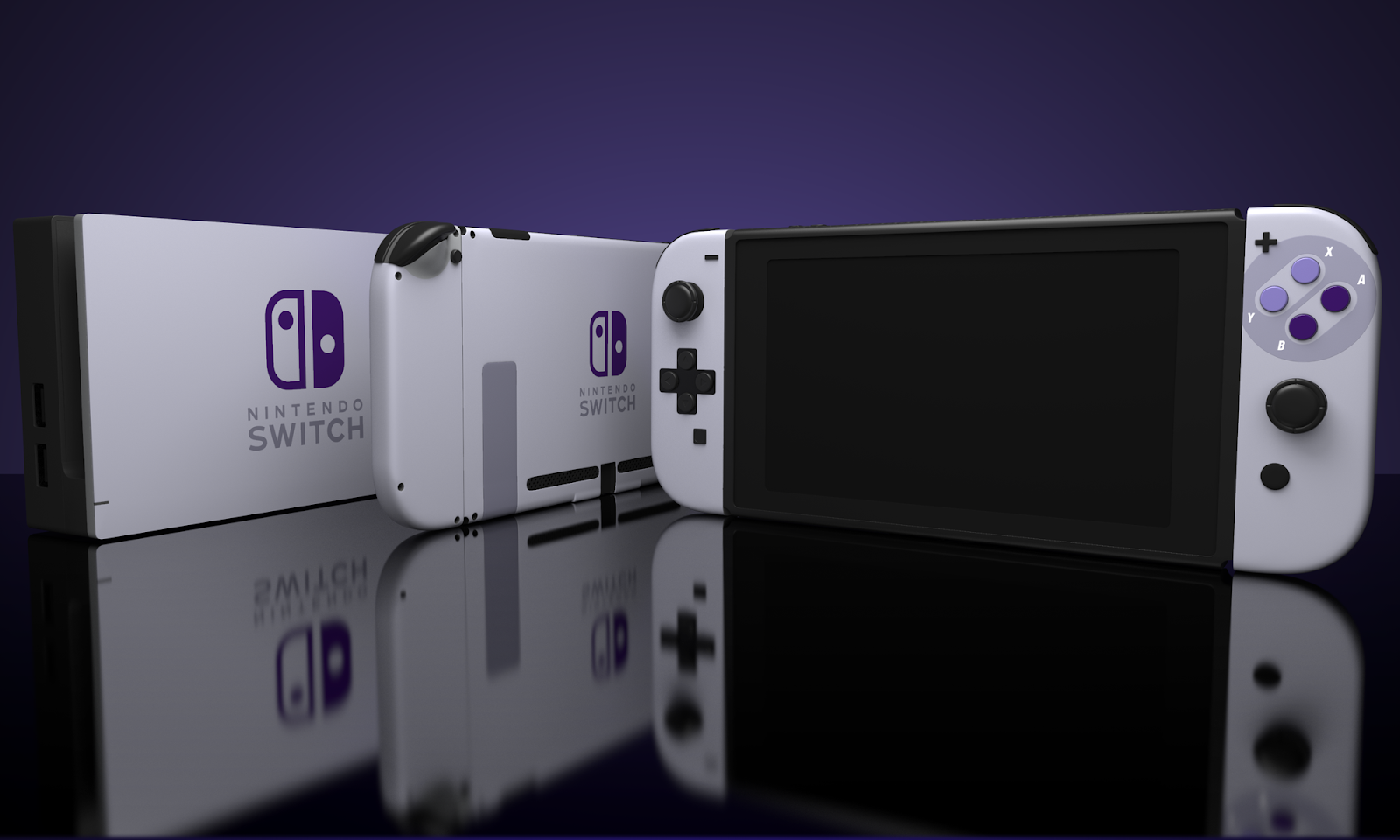 Instead I have a pair of Joy-Cons Colorware calls “Illusion.” These sparkling beauties are coated with an iridescent paint that reacts to light. The colour shifts from a deep purple to a glimmering magenta depending on how the light hits them. 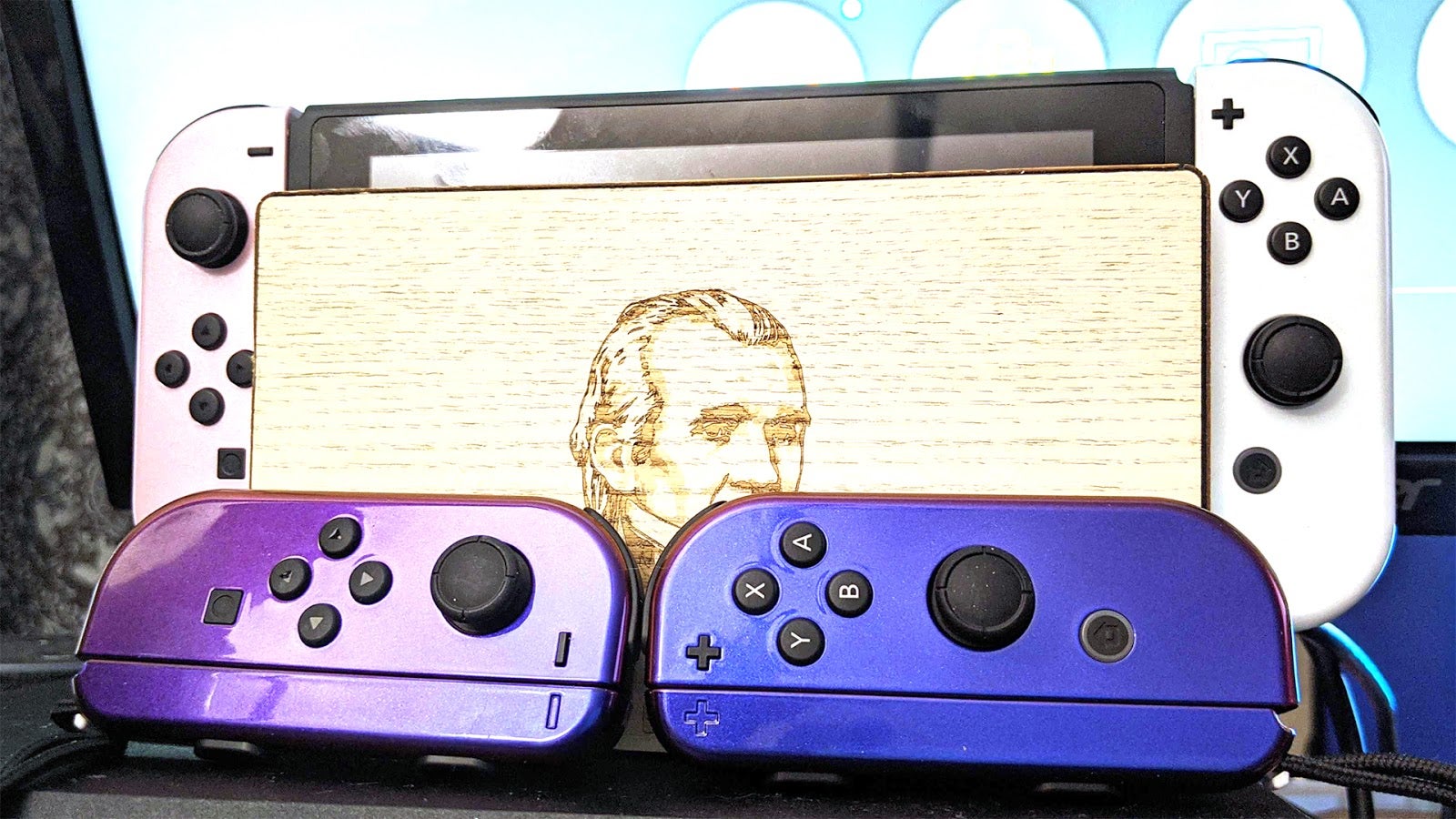 The effect is hard to see in a still image, so I made a GIF. Behold, paint magic.

It’s so pretty. Colorware also makes an entire Switch with the Illusion treatment, which is too beautiful for words. 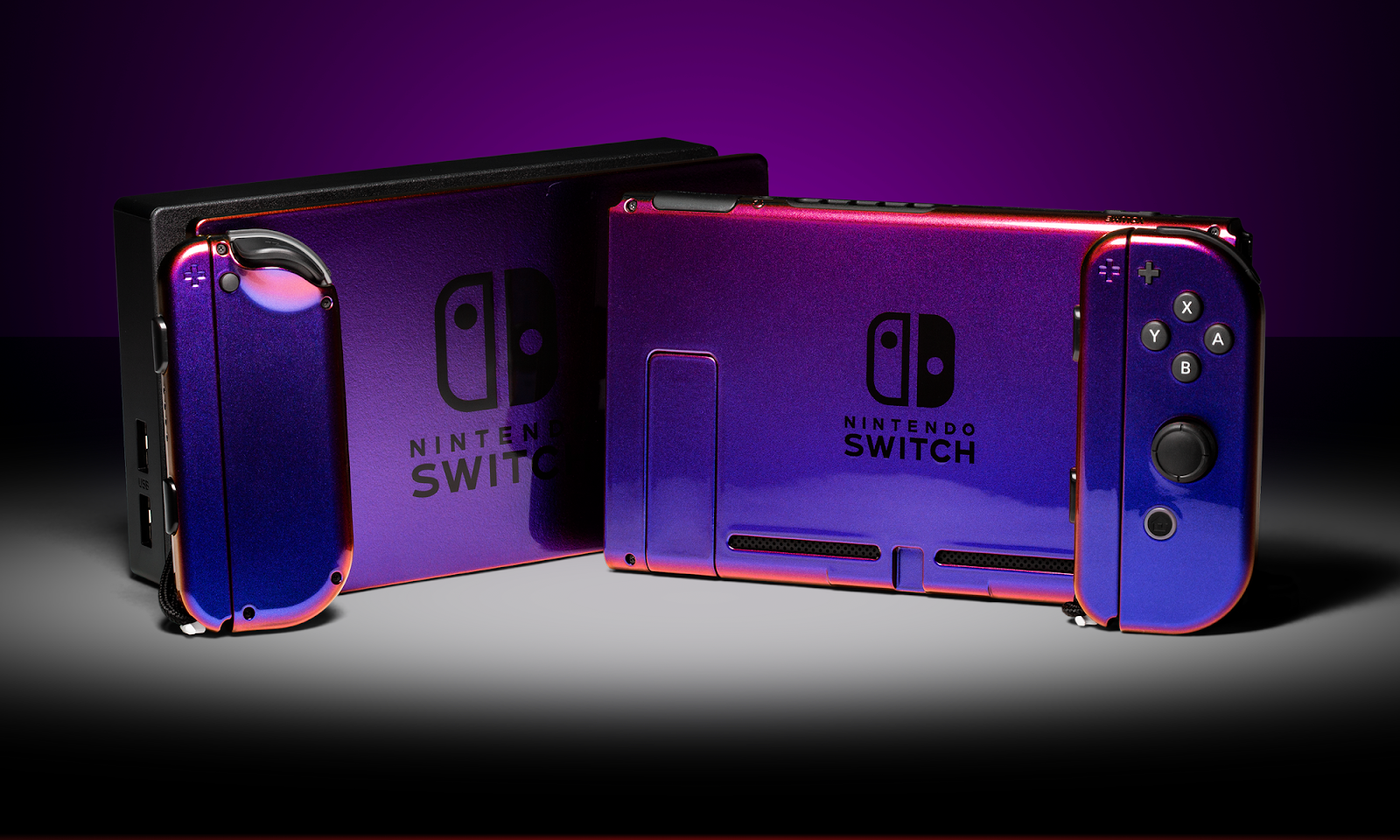 I am incredibly pleased with the way Colorware has coated my Joy-Cons in paint. I’ve been admiring the company’s work for a couple of decades, and up close and personal it does not disappoint. Check out the Colorware website to see all the other things they paint, including PlayStation 4 and Xbox consoles, controllers, and AirPods.