Castlevania is on its way back to Netflix, with more bloody monsters to slay and more villainous scheming than you can shake a Belmont-approved whip at. But it faced a bit of a problem for writer Warren Ellis: he’d already killed off his villain, thinking there wouldn’t be a new season. So where does Castlevania go next?

With the impending arrival of the third season of Frederator Studios and Powerhouse Animation’s vamps and good friends cursing the hell out of each other, Gizmodo spoke to Ellis”the lead writer who has taken the world of Konami’s beloved sidescrolling action games and turned it into a bloody, curse-filled fantasy epic for Netflix for all three seasons”as well as Castlevania executive producer Kevin Kolde about the reaction to the show’s second season, and what’s to come for our heroes and villains alike when the show returns.

Suffice to say: expect Vlad’s lad to be sad.

Looking back at season two, the reaction to that when it came out was on another level, even compared to the success of season one. With that heightened embrace of the show, was there a pressure coming into season three to”I’m so sorry, I cannot think of another way to say this”raise the stakes, as it were?

Warren Ellis: HA! Yeah, I saw it coming and I still laughed. [Continues laughing]. Well…I didn’t see any of that. To this day, I’m not sure if if anyone actually watched season two apart from a few of us. So there was no pressure on me, “˜cos I live in an absolute vacuum. I’ve really got no idea how season two was received”or, as I said, if anyone actually watched it! The only pressure was the pressure I felt to struggle over with season three. And you know, hope the three people who watched season two stick with it for another season. Kevin might have a different angle on it. He talks to people, I don’t. They keep me in the basement.

Kevin Kolde: Well, I’m pretty much on the same page! I think we felt the pressure based on the success of season two. It’s been sort of great to process the excitement, that we’re lucky to work with a great team of people and just sort of live this stuff. It’s not like there was [pressure]”they were gung-ho. “Season three, let’s go.” So yeah, not really. 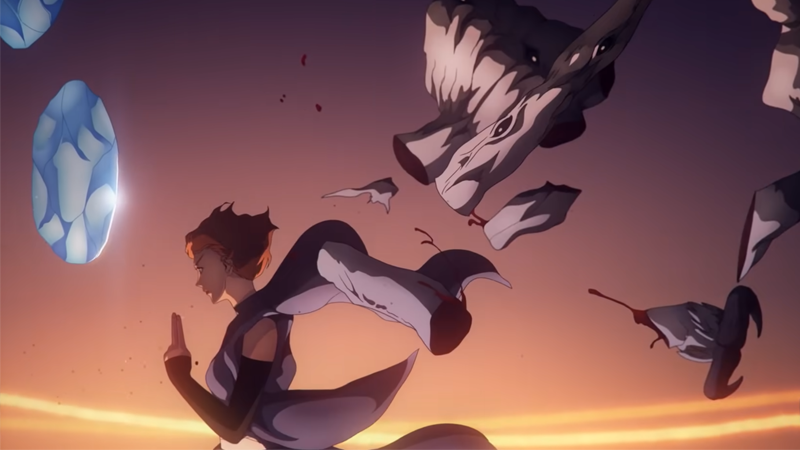 One of the big things that happens in season two is that our heroes confront the big bad, they go to Dracula’s castle, they fight…and he’s defeated. I don’t really want to say “dead” because, well, Dracula, and you know how that turns out. How does Dracula’s current absence, for want of a better word, linger over this new season?Â

Ellis: Oh, well that was the trick, wasn’t it? Because I didn’t know we were going to get a season three. I thought, “Well…shit, I better actually get the end in season two!” And then Netflix asked for a third season, which was delightful. And surprising. And wonderful. And also one of those, “Oh, shit” moments that you always relish as a writer. That said, once we got the offer for season three, it came to me, because I had all those characters aside from Dracula and Lisa and Godbrand”god rest Godbrand. I had all those characters in play across a whole chunk of the hemisphere, really. And I felt like a lot of those characters still had a lot of places to go, and arcs that had been incomplete.

Isaac is the obvious one, in that, yeah”that was open-ended. There was a degree of completion in the arc in season two for him, but not the whole person. And it became clear to me that in an additional season, I could do something about the whole person. So, the show now becomes very much about the stories generated out of the characters themselves. That initial engine is missing, but now I’ve got seven or eight engines that are just as big. And all those characters are equally as interesting to me as Dracula was.

Kolde: I think it’s also the vacuum, right? That allows those characters stories to come to the forefront because Dracula isn’t there anymore”and how does that impact the sort of journey they’re on? So, he’s not there but he’s sort of very much there, in the motivations and background with what these characters are doing. 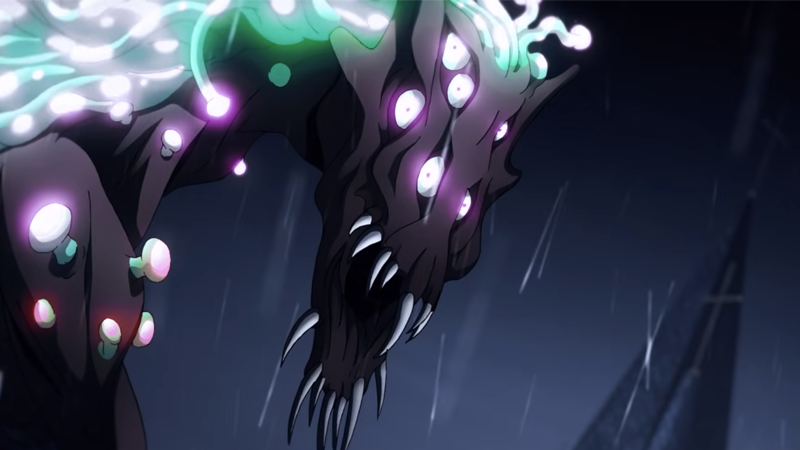 One thing that was perhaps surprising to people coming into the second season was, the show sort of flipped the switch on its pacing and we got to spend a lot more time with the characters just talking to each other”there were a lot more character-driven arcs rather than necessarily the action that was such a major part of the first season. Now that you’ve got all these different “engines” going, what’s the balance between that character focus and the action-side of Castlevania in season three?

Kolde: It’s always been interesting to balance”I think season three serves both of those things. We have ten episodes instead of eight, so we have more characters, and obviously get to spend more time worrying about those characters, and understanding their journeys. That requires them to be able to talk! Which, for me, was one of the best parts, actually, of season two, and now season three. I love the way that Warren writes these characters, and their dialogue is interesting. It’s hard in animation because we don’t have the performances on film, of the actors. We’ve got their great vocal performances, but we have to make that interesting from an animation standpoint”which is a credit to our director, Sam Deats and the incredible storyboard artists [at Powerhouse]. But I think it’s a good balance, I’ve always strived to have that balance. I think the action isn’t meaningful if we don’t care about the characters in their stories.

Ellis: Kevin saved it. My first reaction was, “No, the balance is completely fucked!” I’m at the point I can see this clearly, and feel the things I did wrong. But adding to what Kevin said”and please ignore the previous sentences”what we do have are these incredible actors, and the performances they’ve given us have been so inventive and so rich that they have actually made me go in new directions. And therefore, there is a lot of character exploration that really came from things the actors did in their performances that was new, that was inventive”things that gave us something to think about. We do have the Castlevania action set pieces. I always want that”but my first line of notes was “Season three is the psychedelic horror season.” Psychedelic horror also brings with it some talking and philosophical aspects. It becomes cerebral, as well as emotional in its own way. I like to think of it right now as a richer, denser season than season two. Not least because we have a lot more going on and a lot more characters interacting, and we’re introducing a lot more characters to interact with our previous returning cast members.

Kolde: I don’t think anybody’s going to be disappointed. If you’re here for the action, I think you’ll be very happy if you’ve seen the trailer. If you’re in it for the characters and the great performances, you’re in for just as much of a treat.

Ellis: I do think I’ve got about half-a-dozen good jokes in this one, as well. 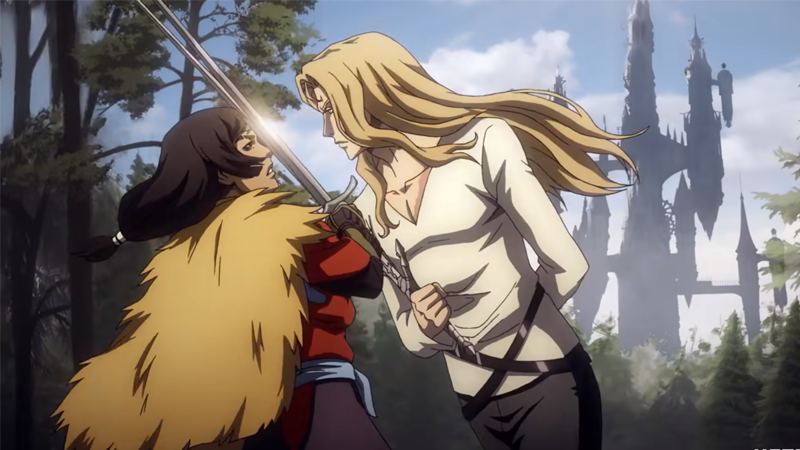 At the end of the last season Sypha and Trevor split off from Alucard, and he stays back at his dad’s former castle to languish in the grief of everything that’s just transpired for him. So, while they’re off doing their very cool-looking monster-hunting stuff we’ve seen in the trailer, what can you tease about Alucard this season?

That’s at least three episodes of story there.

Ellis: Well, you know, that’s like”I’ve been right there, probably. But he does get a couple of visitors! He does get a young man and woman who seeks him out because…I don’t know how much I can get into, but they have this history with vampires at home in northern Japan. And they would like Alucard to teach them how to fight vampires. So he goes from being part of the partnership in season two to being part of a mentorship in season three”which is kind of a big change for him. He must interact with people, which he’s never been great at. On the other hand, he doesn’t have anyone there calling him a cockwart. So, it’s all good for Alucard. 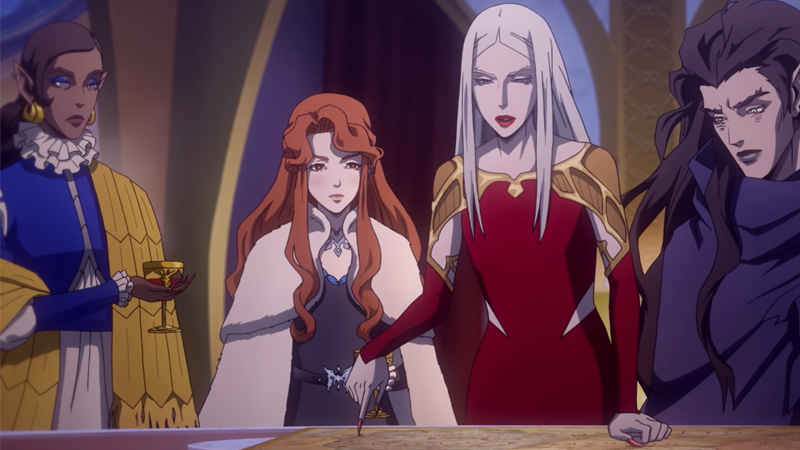 The squad from Styria hatches a plan. (Image: Netflix)

This season, there’s a lot more of the villains to focus on”you touched on Isaac already, but Carmilla is off doing her own thing. What can you tell us about her journey?

Ellis: Well, as Kevin pointed out, there is now a power vacuum in Eastern Europe. Dracula is gone. The night creatures have been scattered, the vampire army is defeated. Big old power vacuum. But where Carmilla comes from, Styria, has always been stable because it’s been run by her and her three female vampire cohorts. The four vampire sisters of Styria have run it for ages. It’s terribly stable. But everything east of Styria is not. So Carmilla sees an opportunity”the possibility for extending her territory, I’ll put it that way.

Kolde: Again, we get to meet her three vampire sisters which I think people will really enjoy. Crazy characters voiced by Yasmine Al Massri, Jessica Brown Findlay … so, I think people are in for a treat.

Ellis: Listening in to recording sessions, just listening to all four of them going at it together was amazing. I want to say those sessions went long just for the amount of laughter between the four of them. But yeah, the squad from Styria were quite a thing.

Castlevania returns for a third season on Netflix later this week. Stay tuned for more from our chat with Warren Ellis and Kevin Kolde later this week, and our full, spoiler-laden thoughts on the new season soon!

It's a big month for anime on Netflix in March: Castlevania returns, there's seven more Studio Ghibli films, and the maker of Cowboy Bebop offers his take on Altered Carbon.