How To Beat Every Boss In DOOM Eternal

doom eternal bossesdoom hunterfeaturemarauder
To sign up for our daily newsletter covering the latest news, features and reviews, head HERE. For a running feed of all our stories, follow us on Twitter HERE. Or you can bookmark the Kotaku Australia homepage to visit whenever you need a news fix.

One of the bigger differences in DOOM Eternal: the bosses are a bigger pain in the arse. Even the mini-bosses can be a right pain, if you’re not paying attention. Here’s what to do. Deag Ranak talks a lot about finding a “worthy opponent” for Doomguy, and eventually a giant mecha-demon comes out of the works: a yellow-eyed, shielded DOOM Hunter complete with chainsaw.

If you want to deal with the shield right away, you’ll need to spam the Plasma Rifle at the DOOM Hunter’s shield. To deal with the rest of the Hunter, you’ll want to aim at the hovercraft-like sled underneath. This is just the first phase of the fight, and in this stage I wouldn’t recommend grappling towards the DOOM Hunter.

The area you’re fighting has a few levels and ramps which are great for giving yourself distance, after which point you can deal damage to the sled with the Heavy Cannon from afar. The super shotgun will do the most damage if you grapple in, but you’ll take a massive hit after the first shot, which isn’t worth it.

Once the sled’s destroyed, you’ll end up in the second phase of the boss fight where the Hunter floats around normally. The hunter still darts sideways quite a bit, so if you don’t have the ability to detonate rockets mid-air you might end up wasting a bit of ammo.

After glory killing the Hunter, a hole in the map will open up taking you all the way down to an icy covered arena. Two DOOM Hunters will show up after that point, and you’ll get to repeat the whole process. Again: deal with the shield first through plasma rifle spam, and hit the weak point as much as possible from at least medium range. You’ll get more Carcasses in this phase, spamming their shields everywhere, but you should be able to reserve your Blood Punch for those since you shouldn’t be engaging the DOOM Hunters in melee if you can help it.

Once both the Hunters are down, you’ll finally get a chance to meet Deag Ranak in person. It ends exactly how you think it will.

How to beat DOOM Eternal’s Marauder Dubbed the most annoying of all the bosses, the Marauder has different attack patterns depending on how close or far away you are. He’s resistant to Super Weapons, so you can’t really use those, and if you get anywhere in close range you’ll get slapped around with a shotgun.

The key is to be super patient. When the Marauder goes to charge, he’ll glow green. You need to attack the Marauder then, and only then because he’ll block all damage at any other point in the fight. If your timing is good, you can use the Super Shotgun to stagger the Marauder just after his dash begins. You can use the plasma rifle as well, and you might find that a little easier if you’re having trouble with the timing.

The first encounter with the Marauder is pretty tough because you’re in a relatively small space, and his dash is pretty effective. But keep staggering him with the super shotgun, or whatever gun you’re most comfortable with in a tight pinch. If you’re using the bigger weapons, he’ll eventually fall after about 10 to 12 solid blows.

How to beat DOOM Eternal’s Gladiator Same strategy applies from the Marauder here. The Gladiator will glow green at both stages of the fight – with or without his shield – but regardless of what he’s doing, he’ll be most vulnerable during the flash.

The windows of the flash are relatively short, but fortunately there’s another opportunity to do damage after the Gladiator dashes or jumps forward with his whips. You can use whatever weapon you like here – the bigger the better. And just remember you’re fighting in a small arena, so while getting in a quick Blood Punch can be tempting, you’re better off with rockets. Just keep your dash handy, and don’t get backed up against the wall. Side to side always. This is the one time you’ll want to get up close, since it’s the only real way to get the most possible damage in. The Khan Maykr has a shield up, so spam that down with the plasma gun or any long range explosive of your choice. The ballista is super useful too, and generally perfect for this kind of long range fight. After hitting her with enough weaponry, her wings and body will glow green, and you can hook in for a fist to the ribcage.

Beyond the damage, you’ll mostly want to focus on switching levels as much as possible. The Maykr drops a ton of area of effect attacks on the arena, covering most of the ground with and staying out of range – or using the meathook on the Maykr drones or mobs is a good way to get out of the fray.

After several Blood Punches, the Maykr will eventually fall out of the sky. She’s not happy about it, and neither is a weird mysterious voice that – naturally – Doomguy will also have to deal with.

How to beat DOOM Eternal’s Icon of Sin

Hope you like a nice long fight, because you’re in for one. The Icon of Sin has 8 separate pieces of armour, all of which need to be dealt with while you dodge his massive AOE flame attacks and projectiles.

One of the biggest problems in this fight is getting caught out by all the pinkies and enemies charging you at close range. There’s plenty of room and portals to avoid the Icon of Sin’s initial attacks – it’s just about making sure you create enough space in those small corridors.

The chaingun, BFG, and ballista are all good options for knocking off the armour parts – and the 8 body parts you’ll have to tackle immediately after. As for dealing with the small mobs, the simple solution is to fuck around as little as possible. Pull out the Crucible Sword and slice anything and everything you can to quickly deal with it. If you’re getting charged by cacodemons and pinkies, zone them out with larger AOE attacks and particularly the ice bomb, since it’ll let you individually glory kill or slice up demons one at a time for extra ammo, armour or health.

When the armour is worn out, you’ll have the second phase of killing the 8 body parts. Stronger demons will spawn during this phase as well, and the Icon of Sin will start covering the battlefield with laser beams of fire, fireballs and the odd fist to the ground if you’re close enough.

Don’t forget to use your grapple on enemies to get out of trouble, but also as a way of getting into range with your crucible sword, since you don’t have the same range on that as you do with a basic glory kill. Other than that, the best strategy is the oldest one. Clear out the corridors on either side of the arena then switch to a chaingun and let rip until the Icon’s body parts start to shred. Eventually you’ll wear the beast down, and you’ll be treated to the classic Mick Gordon riffs that we all know and love.

DOOM Eternal is all about having the right tool for the job. But some tools are more essential than others. That's the Heavy Cannon. 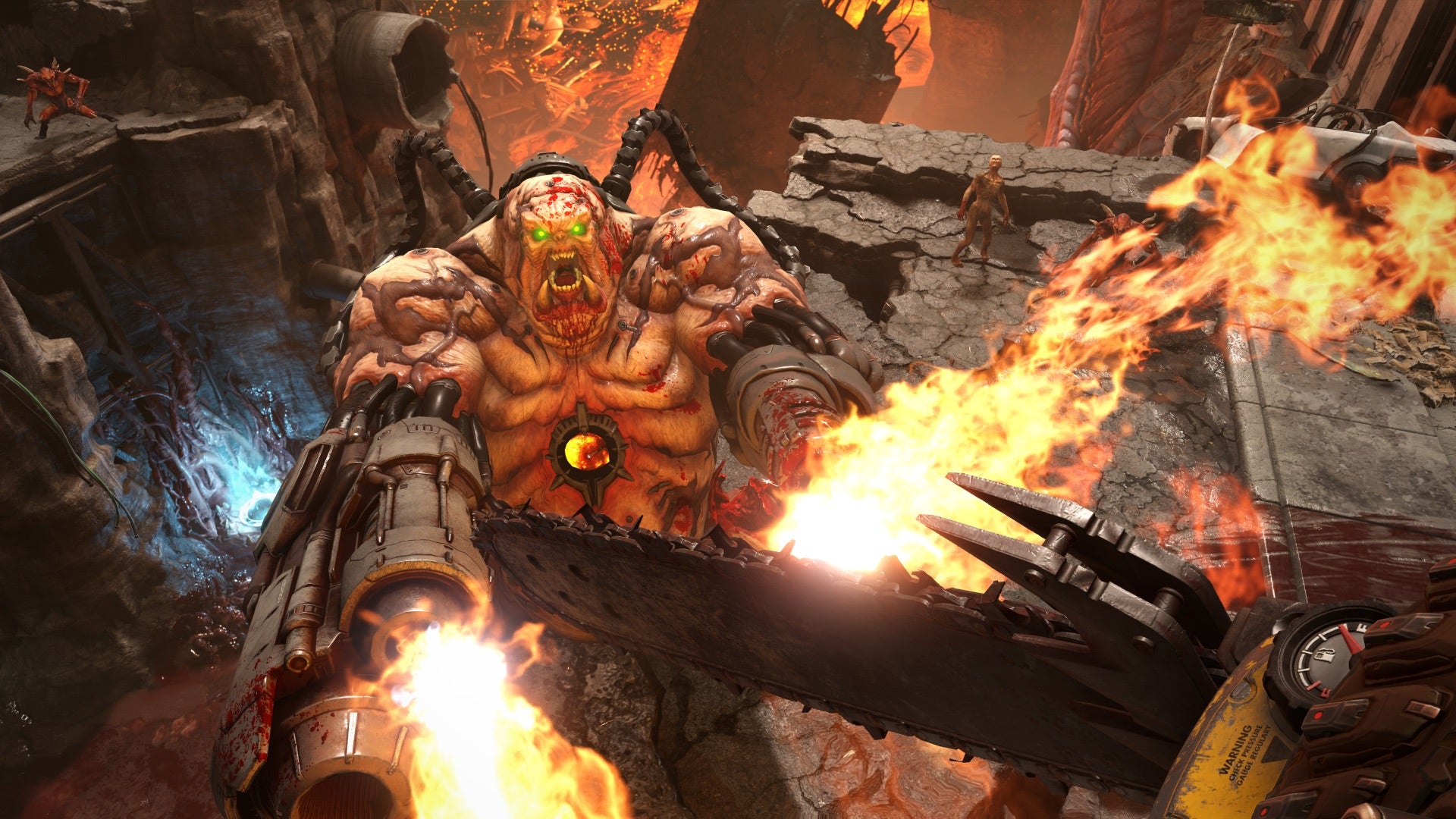 Of the two hotly anticipated games released this week, most would assume Animal Crossing: New Horizons would better fit the bill as the self-care game. It’s a peaceful, low-stakes game where the most taxing decision you make is what wallpaper you want. Perfect for these times right?