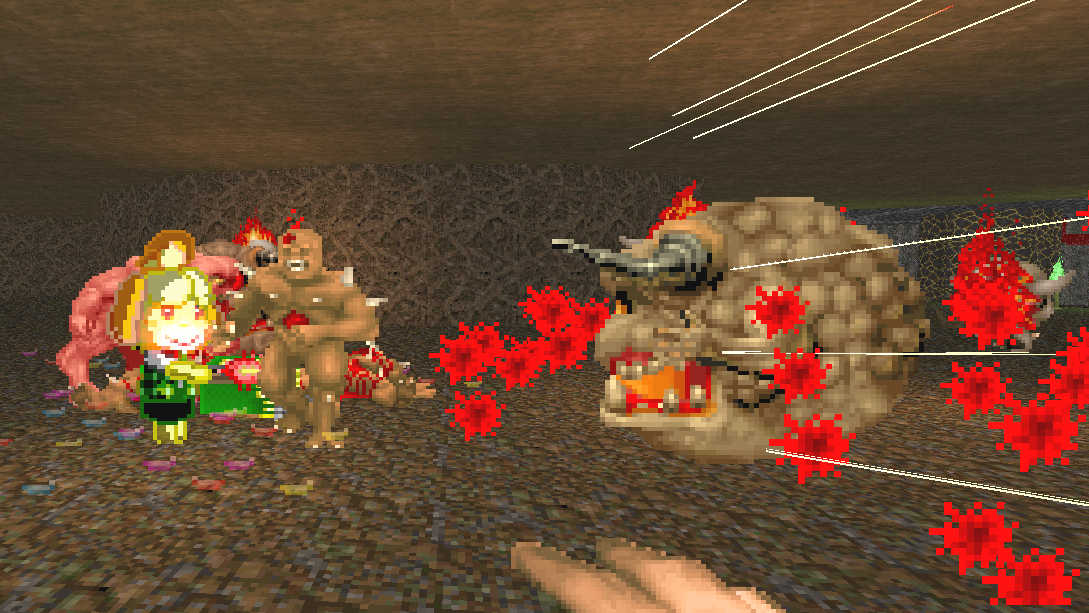 Screenshot: itsmeveronica, <a href="https://www.moddb.com/games/doom-ii/addons/isabelle">ModDB</a>
To sign up for our daily newsletter covering the latest news, features and reviews, head HERE. For a running feed of all our stories, follow us on Twitter HERE. Or you can bookmark the Kotaku Australia homepage to visit whenever you need a news fix.

Doom and Animal Crossing fans have spent the last year turning Doomguy and Isabelle into best friends. Now there’s finally a mod for them to team up and kick arse together.

Created by Doom modder itsmeveronica and released last week, the Isabelle mod adds Isabelle as a companion to the first three Doom games and has her follow Doomguy as he tries to fight off the forces of hell that are occupying Earth’s only spaceport. She’ll crush demons with her clay pots and blow them up with her confetti bombs. She’ll also toss you a bunch of health packs and extra amm, because that’s what best friends are for.

While Isabelle will do all this on her own, you can also give her commands to have her ignore enemies as she follows you or to stay put and attack them in a certain area. It’s ridiculous, chaotic, and funny, and it’s the perfect way to play through early Doom games for anyone intimidated by the classic first-person shooters. Isabelle can’t die, and she does an excellent job of making sure you don’t either.

Itsmeveronica said they finally decided to make the mod earlier this month after being inspired by all of the fanart going around online. While the mod occasionally has some bugs, it’s also full of great little touches like custom idle animations for when you spend too long between killing stuff. It’s also easy to download: All you need is a copy of Doom, Doom II, or Final Doom and the mod and to drag and drop them into the GZDoom open source port.