GDC Is Cancelled, But This MMO Lets Everyone Attend A Bizarre Parody Of It

Like everything else, this year’s annual Game Developers Conference in San Francisco has been postponed. But now it’s been resuscitated. Sort of. If you consider a really weird MMO to be an adequate substitute.

Crows Developers Conference is a free game from development studio Crows Crows Crows, which previously made Accounting+ in conjunction with Rick and Morty’s Justin Roiland and is now working on The Stanley Parable: Ultra Deluxe. It’s a digital re-imagining of GDC, or perhaps more a max-volume boombox blast of GDC’s networking-obsessed id, that will be live all this week..

It takes place in a simple environment meant to mirror San Francisco’s Moscone Centre and the park nearby. The characters appear to have arisen from the clip art section of hell, and the “developer”-led sessions run the gamut from enthusiastic nonsense to embittered, shriek-screamed nonsense. Also, Crows Developers Conference abbreviates to CDC, and every time you spout a line of canned dialogue, your character coughs. Crows Developers Conference, in other words, is not trying to be subtle. 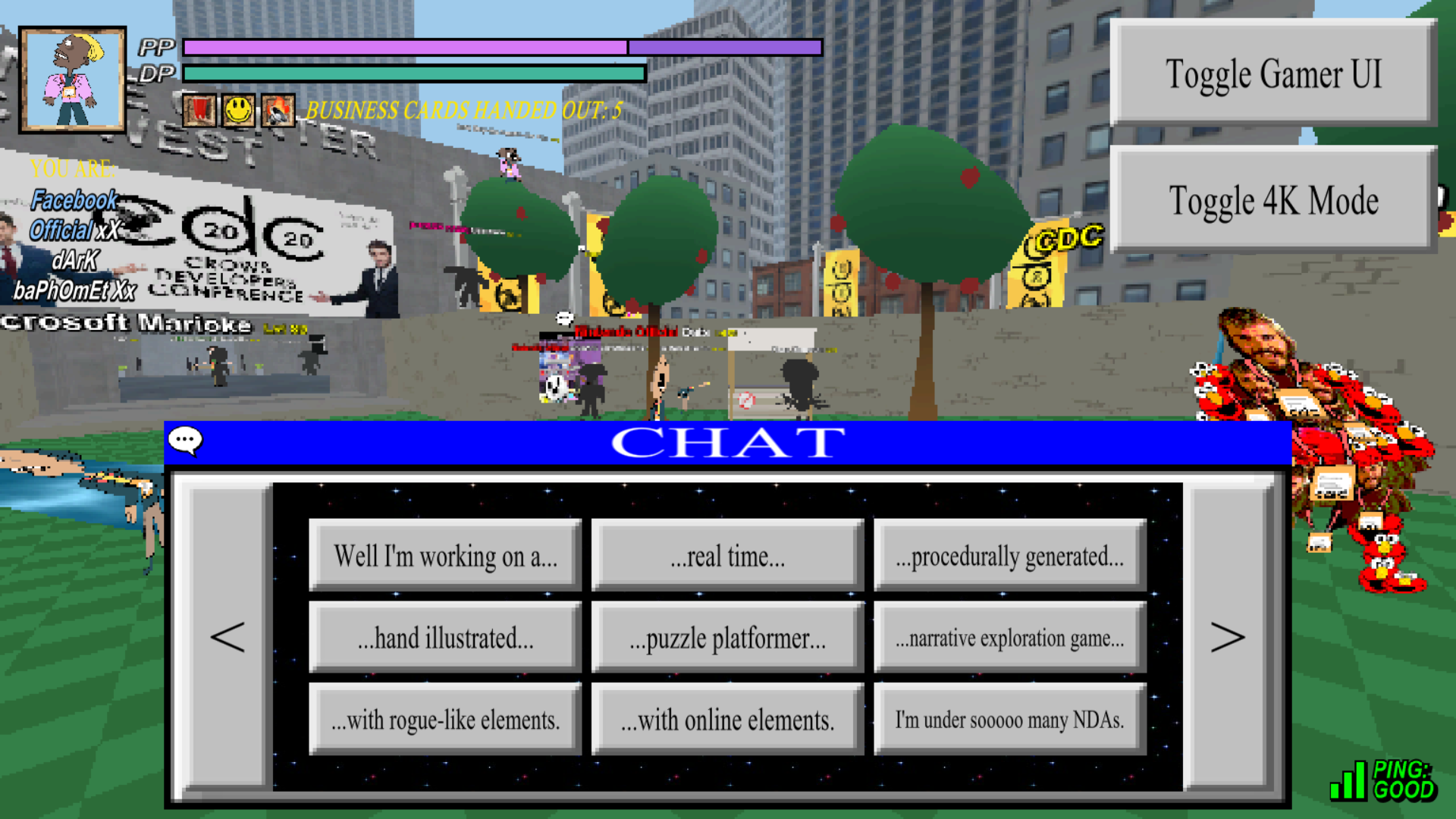 But it is very funny. The game is technically an MMO, but your only means of interacting with other players is a selection of pre-written dialogue that includes standard convention fare like “How was your flight,” “I’m already tired,” and “Are you going to the party,” as well an entire page of buzz phrases you can use to describe the game you’re working on. At one point, a guy who took the form of a giant floating face told me he was working on a “real time… hand-illustrated… narrative exploration game… with rogue-like elements.” I was very impressed, so I asked him how his flight was.

Sessions and panels are another highlight. Unlike the real GDC, where developers are given a chance to drench their ideas in unnecessary dressings like “nuance” and “substance,” CDC talks last one minute and are composed of one slide. My favourite was a debate about whether developers should use Unity or Unreal to make their games. It was hosted by two definitely real people, Eric Unity and Timothy Unreal. They immediately began screaming at each other and did not stop until their minute ran out. I felt like I learned a lot.

Another talk was presented by a developer who was exactly like you or me, except for one small detail: His parents were rich. His talk consisted of platitudes about how you should “work hard,” “believe in yourself,” and “never give up,” no matter the cost. One fourth of his slide was dedicated to his trust fund. Crows Developers Conference is extremely on the nose, but given how difficult it can be to walk GDC’s hallowed halls if you’re not some flavour of wealthy, it’s not wrong. 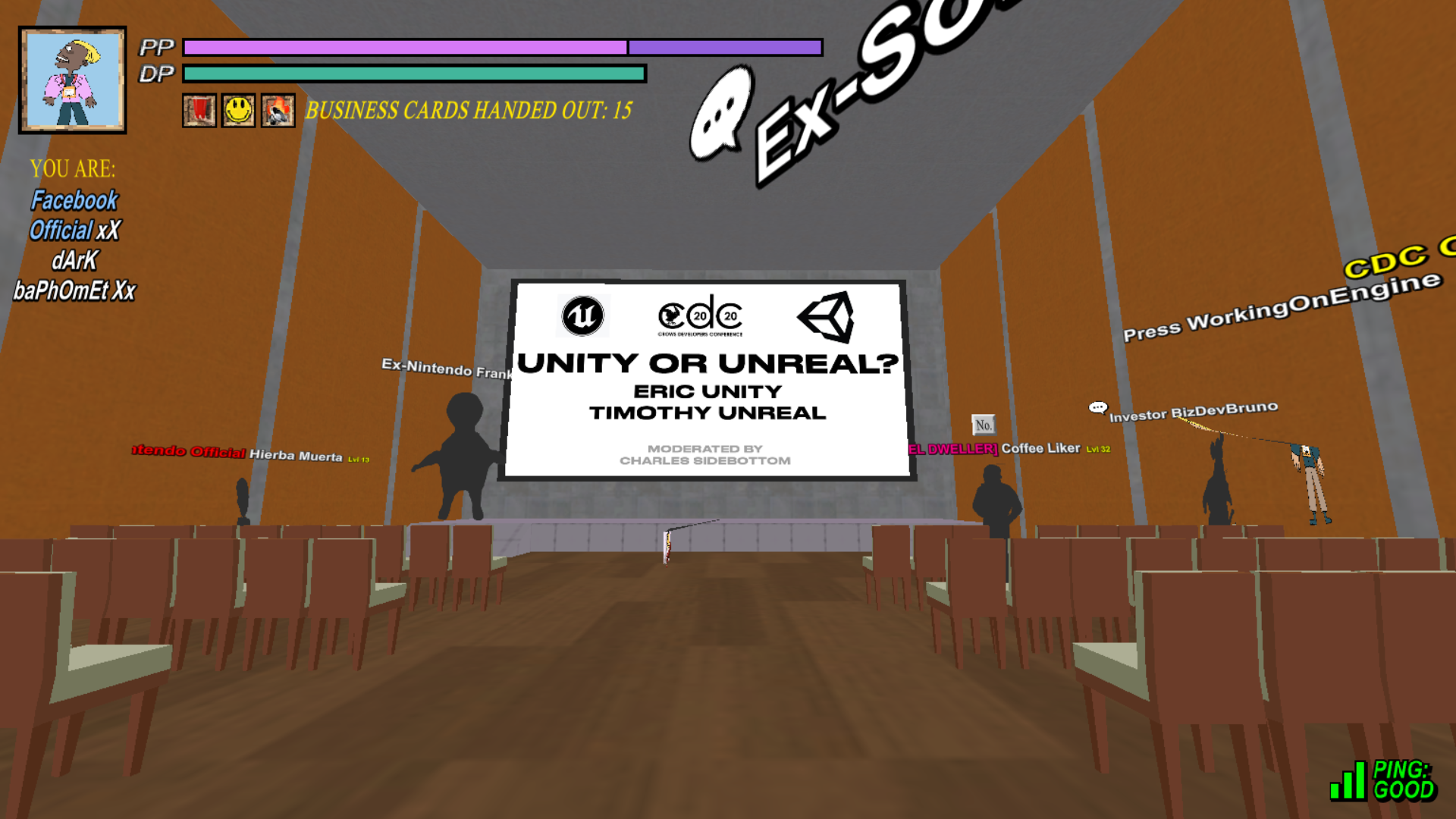 Crows Developers Conference is built from many of the same materials as a previous Crows Crows Crows experiment, online club simulator The Club, and it’s equally obtuse. Aside from attending talks and making collaborative word salad with other players, there’s not a ton to do—initially, anyway. You can “explore” a giant, empty expo floor and a handful of other spaces, but that appears to be all she wrote. However, if you wait 50 minutes—until your “business cards handed out” counter automatically ticks up to 50—an old man in the park outside the convention centre will task you with collecting seven special business cards. I got this quest, but I haven’t finished it. However, apparently if you do, you get to ride a cloud? Or something? Players are still trying to find other secrets, but for now, that’s as deep as this rabbit hole goes.

Well, unless you jump on top of the old man and leap over the park wall and off the edge of the game world, like I did. Then the hole goes much, much deeper, in a very literal sense. It reset my business card counter, though. All that networking, and it feels like I accomplished nothing at all. In that sense, at least, Crows Developers Conference is exceedingly realistic.