Granblue Fantasy Versus: The Kotaku Review

It seems like everything is getting a fighting game adaptation these days. Dragon Ball Z, RWBY, Power Rangers, League of Legends, you name it. Granblue Fantasy, one of many mobile role-playing gacha games that asks players to spend real money on virtual slot machines, is the latest to jump aboard the train.

While I have literally zero experience spending my life savings on a chance at winning a JPG of my waifu, I do know fighting games, and Granblue Fantasy Versus, out March 3 on PlayStation 4 and March 13 on PC, is an excellent new entry in the genre.

Granblue Fantasy Versus is wholly invested in teaching players despite being developed by Arc System Works, the same studio behind unforgiving fighting games like Guilty Gear and BlazBlue. No tutorial is going to turn someone into Daigo Umehara overnight, but Versus feels uniquely capable of guiding beginners organically without needing to stuff their heads full of jargon.

While there seems to be no rhyme or reason to how lessons are arranged, they generally teach the player how to do something and then how to defend against it, from surface-level techniques like using auto-combos (simple one-button combos) to more advanced concepts like cross-ups. I was surprised to see that Versus also has tips about specific techniques fighting game tutorials don’t often touch on, like defending against tick throws—setups where a throw is used immediately after a safe move like a light punch is blocked.

In addition to combo trials that teach the player useful attack strings for the entire cast, Granblue Fantasy Versus offers character-specific matchup instructions. These include tips for punishing certain attacks as well as more technical knowledge, like how to get around a zoning character’s various projectiles. Again, these aren’t going to propel someone to an Evo championship, but the Versus tutorial does an impressive job teaching how to think about playing a fighting game situationally rather than just providing a basic run-through of inputs and combos.

Basic offence in Granblue Fantasy Versus revolves around four buttons: Light, Medium, Heavy, and a Unique Action that, as the name suggests, is different depending on the character. Gran, who essentially functions as the Ryu of the game, charges a powerful sword attack the longer the Unique Action is held. Metera, the keepaway archer, can perform a couple of short hops as a way of maintaining her distance or launching a surprise attack. While the roster’s normal attacks are always going to be different in terms of speed and power, it’s the Unique Actions that further differentiate each character’s gameplan.

Granblue Fantasy Versus sets itself apart by incorporating cooldown timers for special moves. Fireballs and uppercuts can be performed with a single button, but doing so makes it so that the attack can’t be used for a longer period of time. By using the “technical” input—quarter-circle motions and the like—players can shorten the time the move is locked out.

This makes it so that beginners can jump into a match and immediately start chucking plasma and piledriving their friends, but there’s a clear incentive to learn traditional fighting game inputs. While it was a frustrating mechanic to get used to at first, I was impressed by the way these cooldowns affected the rhythm of a match and made me rethink situations that wouldn’t come up in other fighting games. Don’t get me wrong: I’d rather not see cooldowns implemented elsewhere, but I’m glad Arc System Works experimented with them in Versus.

Granblue Fantasy Versus also utilises two different types of blocking, both traditional hold-back-to-block mechanics and a dedicated block button. Unlike with special attacks, however, using the simpler option won’t have any noticeable downsides for the average player. In fact, it’s better for defending against cross-ups since you won’t have to decide which direction to block, leaving you to worry about high and low attacks only.

This kind of simplification is controversial because it provides a hugely powerful tool without any incentive to learn how to block in the conventional way (at least, conventional for Arc System Works games). Unless the mechanic changes in a future patch or an obvious drawback is discovered, the block button is definitely the way to play defence in Versus.

Although its gorgeous anime-style visuals may hearken back to the studio’s previous fighting games, Granblue Fantasy Versus isn’t an overwhelming airdash fest like its Arc System Works cousins Guilty Gear and BlazBlue. Several characters include fireballs in their arsenals, but players also have essential tools to dodge those projectiles in place or gain ground on a zoning opponent with Evade and Cross-Over, respectively.

That doesn’t mean Versus can’t also be unforgiving at times. Several characters can set up powerful “setplay” situations, wherein they land a combo that knocks the opponent to the ground and then set up a delayed attack or trap that can lead right into another combo if the opponent doesn’t block the mixup correctly. Defending these setups will rely on a player’s ability to differentiate between high and low attacks. It’s frustrating, but it’s also a basic building block of the fighting game experience that needs to be learned over time. 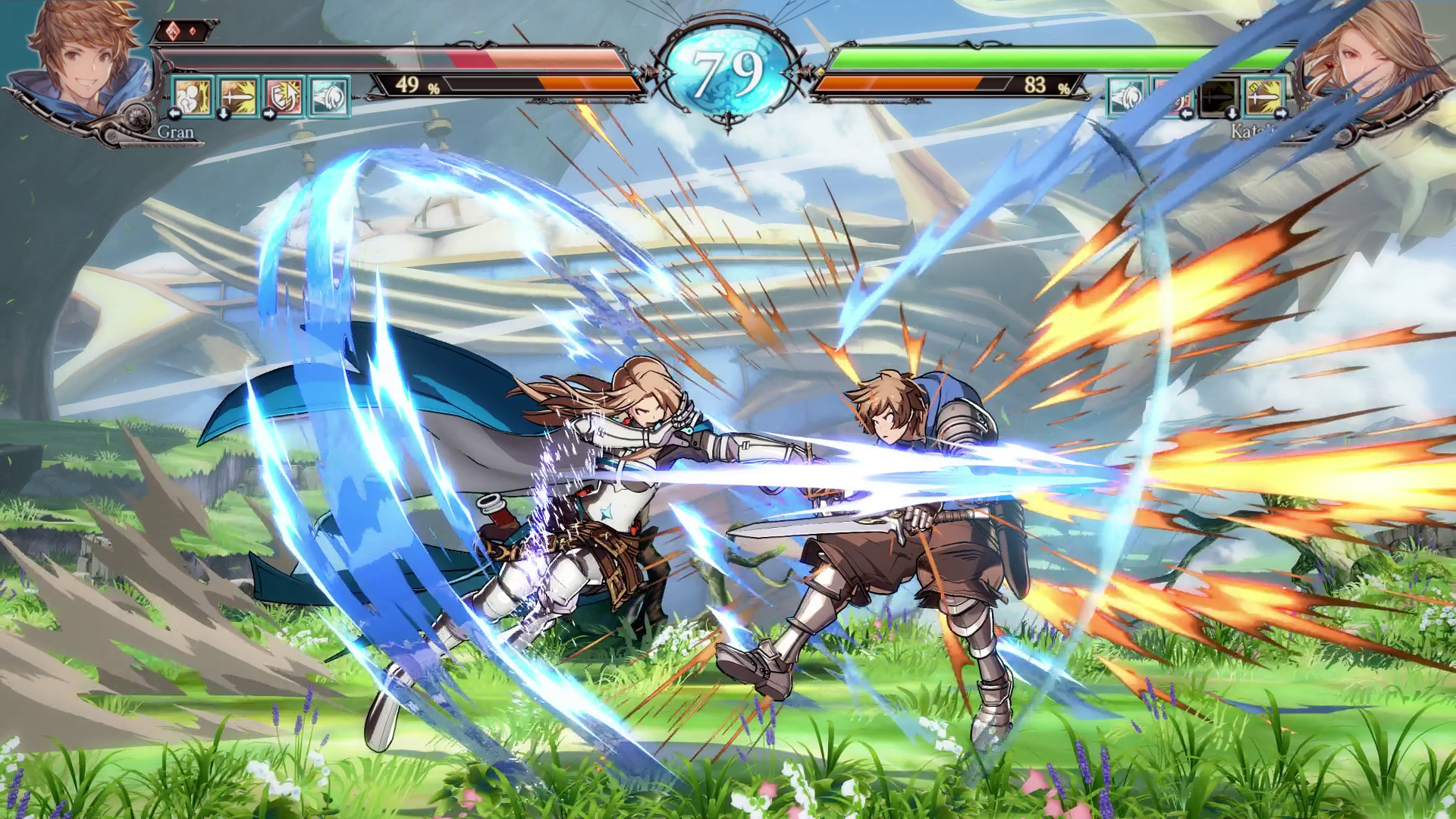 If that was all Granblue Fantasy Versus offered, competitive players would likely be satisfied, but Arc System Works included a lengthy “RPG Mode” as well. This is basically a story mode like one would find in other fighting games, but instead of a relying on series of disjointed scenes that inexplicably lead to one-on-one fights, RPG Mode functions as a sort of beat-em-up à la Final Fight or Double Dragon.

I can’t be entirely sure that I understood everything that happened over the course of the adventure, but some beautifully rendered cutscenes and silly character interactions were enough to keep me interested for a few hours. Unfortunately, objectives never get much deeper than “Defeat These Enemies” or “Survive for a Couple of Minutes.” Even boss battles against individual characters or larger-than-life monsters were rote affairs where using the same combos and skills over and over was enough to win.

Granblue Fantasy Versus’ RPG Mode also introduces a mechanic from its mobile predecessor where you can roll for random weapons or character skins with tickets earned during quests. There’s also a system where you can level up specific weapons and their bonuses much in the same way you would in the original Granblue Fantasy, but there’s very little strategy to weapon choice. As long as I made sure to use equipment that matched the game’s pre-mission recommendations, I ran into very little resistance from the CPU opponents. Upon completing RPG Mode, I gained access to a harder difficulty, so it’s possible that folks who found the experience worthwhile might find a challenge there. It might have been a better idea for Versus to make the harder difficulty available from the start.

The cast of Granblue Fantasy Versus’ RPG Mode is also pretty boring, relying on the same fantasy tropes as countless other games. There’s the young kid who’s suddenly thrust into the role of hero, the silly non-human sidekick, the magical girl who needs protecting, and a procession of very serious warriors on very serious business.

The one bright light in this sea of mediocrity is a character named Ladiva, a hulking wrestler who serves as the game’s grappler. While I don’t particularly enjoy using grapplers, Ladiva quickly became my backup character, accompanying me through much of the RPG Mode and crushing enemies with all the love in her heart. What I think really endeared me to Ladiva, however, is how the developers handled her delicate backstory. 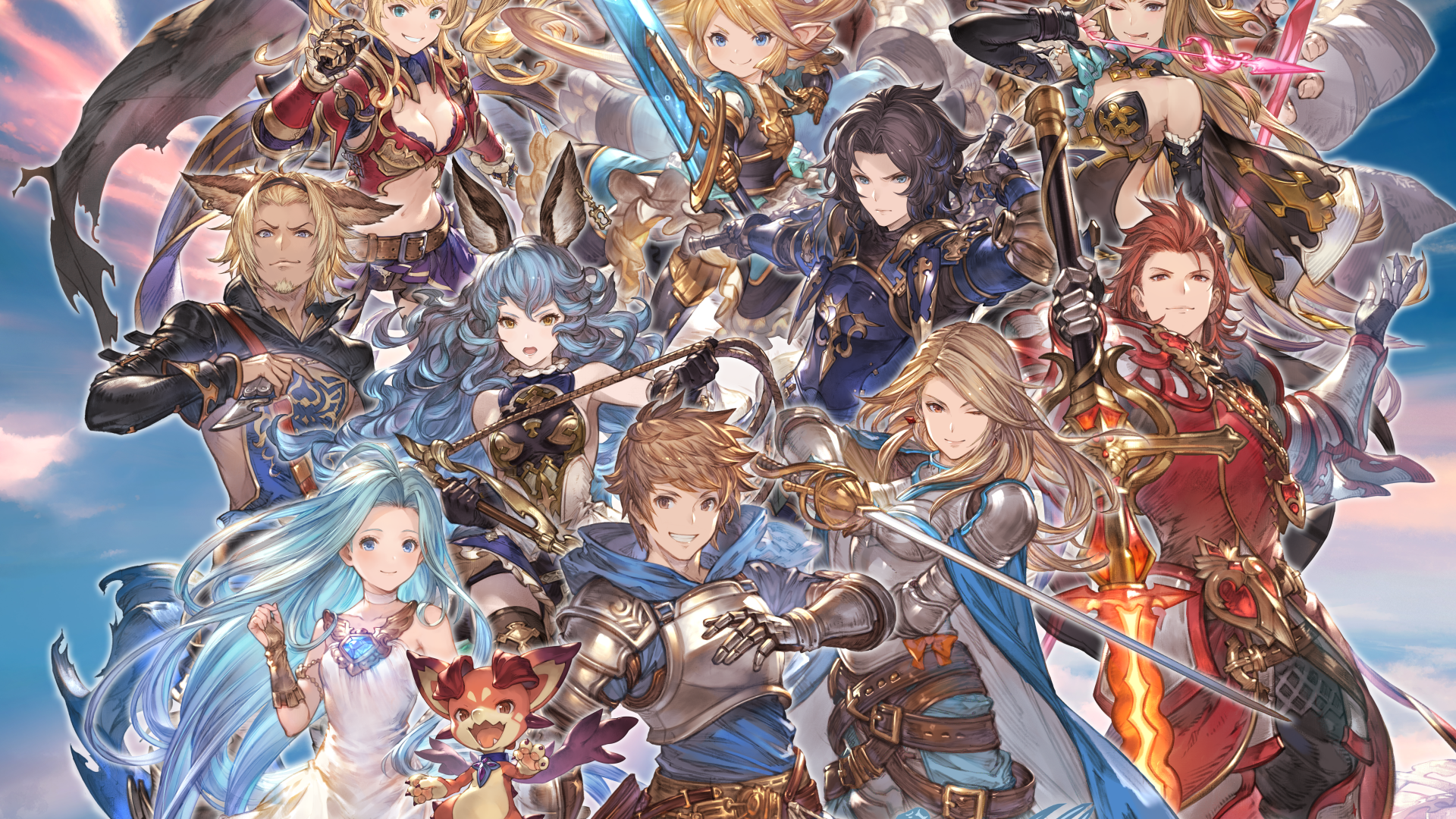 Ladiva is a trans woman who doesn’t abide by traditional gender signifiers. She’s a muscular fighter with a prominent goatee, and not one of the other Granblue Fantasy Versus characters bats an eye. She is never referred to with anything but she/her pronouns, even by enemies and strangers. No one makes any jokes about Ladiva’s build or facial hair. Like several of the game’s characters, Ladiva is given room to be silly—her entire schtick is that she beats up opponents out of love—but her identity is never in question and she’s never the butt of any transphobic jokes. With the problems facing LGBTQ+ representation in other games, the realisation that Versus wasn’t going to use Ladiva as a humorous prop or a half-assed cipher for trans struggles was a breath of fresh air.

The bland slog of single-player made it all the more frustrating that delay-based netcode made online multiplayer unreliable, causing even matches with good connections to have jitters and dropped inputs. Granblue Fantasy Versus is also plagued with super long loading times in just about every mode. My biggest pet peeve in fighting games is not being able to launch the game and find matches in a short amount of time.

Versus isn’t as bad as, say, Street Fighter V, where the wait between launch and playing can seem like an eternity, but these shortcomings are a huge barrier to me wanting to spend more time with the game if they’re not improved with future patches.

Granblue Fantasy Versus is a fantastic new fighting game that more than justifies its existence in an already overcrowded genre. The way it encourages players to learn more about its mechanics, both with a decent tutorial mode and iterative techniques, surprised me. RPG Mode is lacklustre, but Versus more than makes up for that with its core gameplay.

That said, I’m discouraged by the way Arc System Works continues to stubbornly ignore technology that would make the online multiplayer in their fighting games better for the vast majority of players. Granblue Fantasy Versus should still be inviting for anyone with an interest in fighting games, but be ready to spend most of your time trying to find decent matches online if you don’t already have friends to play with in the same room or a local competitive community. This is still a fighting game, after all.