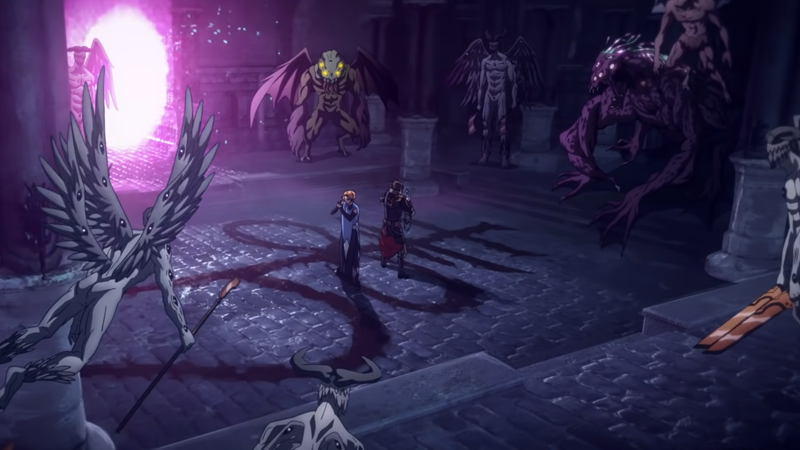 Sypha and Trevor stand ready to kick monster arse. (Image: Netflix)
To sign up for our daily newsletter covering the latest news, features and reviews, head HERE. For a running feed of all our stories, follow us on Twitter HERE. Or you can bookmark the Kotaku Australia homepage to visit whenever you need a news fix.

Video game adaptations have had a rocky history“so rocky, that it’s practically a revelation when we get big blockbuster movies such as Detective Pikachu and Sonic. They wind up feeling like huge celebrations simply because they manage to be basic, fun family movies. But Netflix’s Castlevania has carved out a niche for itself that both champions and enriches the world that inspired it: and it’s done so by striking a very specific balance.

That balance can be represented rather simply by its creative team. Watching even a second of Castlevania makes it clear that the team at Frederator and the artists at Powerhouse Animation love the aesthetic, action, and world of Konami’s revered action games. It’s why its beautifully animated fights shine as some of the series’ finest highlights. It’s why its sneakiest references to some of the most gleefully goofy things about a series starring a multi-generational family of whip-loving vampire hunters going after Dracula are so enjoyable against the stark contrast of this grim, gory world.

But what makes Castlevania really work is something that the games themselves only sort of painted with the broadest of strokes: the characters. That is where series writer Warren Ellis”who has long been open about his inexperience with Castlevania as a game series”comes in, providing himself with a relatively blank canvas with which to turn these sidescrolling heroes and villains into the messy, funny, and complex figures that fans have come to love as the show progresses.

“There were certain pieces, I did cherry-pick from different bits of the games” so, if you’re extremely well-versed in Castlevania lore then you will see things you recognise being draw in from places in the canon,” Ellis recently told Gizmodo of his approach to the series. “If, like me, you’ve never played the games, it won’t make a blind bit of difference to your enjoyment of the thing…I’m just making it up as I go along. It’s fine!” 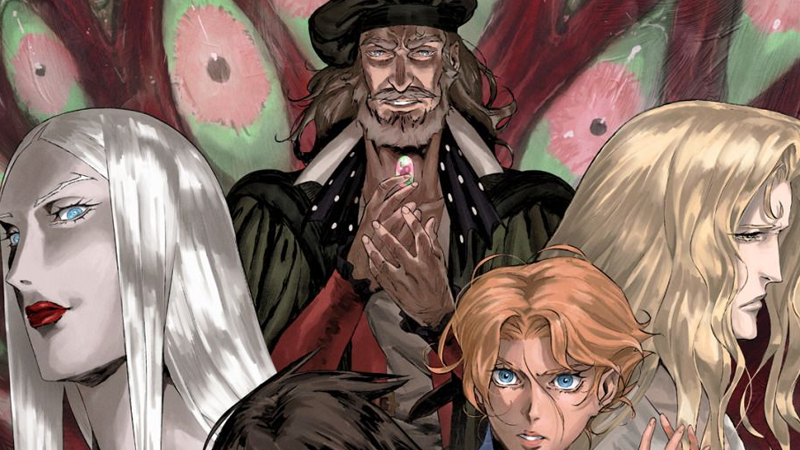 The upcoming season in particular led Ellis down an interesting path, integrating a Castlevania series character inspired by actual history he was familiar with: Saint Germain, who first appeared in the 2005 PS2 game Castlevania: Curse of Darkness, and who be played by Bill Nighy in the show. “Saint Germain was probably the main piece of canon I lifted. Not least because you get that weird filtering thing with a bunch of young, Japanese creators from 20, 30 years ago cherry-picking things from European experience and filtering it through their ideas, perceptions and understanding,” Ellis ruminated.

“Then it comes back to the game, and you get this weird, mutating effect”with Saint Germain, there was this long, rich history of magician charlatans who would tour the great courts of Europe looking for patronage,” Ellis continued. “And so, once I realised Saint Germain was actually one of those slightly gamey characters from the period, who did just wander around Europe trying to catch coins from purses, doing magic tricks and reading horoscopes…I knew I had someone really interesting to put beside Trevor [Belmont] for another character. I remember the night I landed on the voice of the character…and a couple of months later we were lucky enough to hire that exact voice, which is Bill Nighy!”

But while Ellis’ lack of personal familiarity with Castlevania as a game series is a boon for his approach to writing its characters, the moments the show does embrace those gaming roots directly can lead to some of its most satisfying moments. Take, for example, what is perhaps one of the most talked-about moments of the show’s second season”the triumphant fight between Alucard, Trevor, Sypha, and Dracula’s generals.

It marked the first time the show utilised one of the Castlevania franchise’s most beloved elements: its soundtrack. “That was actually all Kevin and Sam [Deats, Castlevania co-director],” Ellis noted. “I do tend to write in musical cues or notes into the script, but the use of “˜Bloody Tears‘ was all Kevin and Sam.”

But as Kolde noted, even with music as beloved as Castlevania‘s, it can never be as easy as slotting a tune into the background of any scene and calling it a day. They have to, like the moment with “Bloody Tears””which is arguably the series’ most iconic recurring theme”be earned.

“It’s always been an ongoing business just how much music from the games we would or wouldn’t use because, as you pointed out, the music is special to fans of the games,” Kolde said of the scene. “The challenge is when you’re doing a narrative, in a different format, and you’re looking for background score music, it’s not always appropriate”even though it might seem”to drop those game tracks in, you know?”

What makes that “Bloody Tears” scene work in Castlevania isn’t just that it’s the long-awaited use of a beloved piece of music. The show’s sophomore season marked a the bloody action that characterised its debut.

The battle in Dracula’s castle is the first major action setpiece of the season, the culmination of everything our heroes have spent the season working toward, and the realisation of their foes of just how much their infighting has undone them. Saving Castlevania‘s iconic soundtrack for a moment like that makes sense.

“I guess the thinking was if we were going to do it, it had to be the right place to do it, and obviously, that turned into the battle at Dracula’s castle,” Kolde continued. “It felt right, and that track felt right, and [Sam’s] brother Adam [Deats, a fellow Powerhouse Animation director on Castlevania] actually built the early versions of that storyboard thematic around using “˜Bloody Tears.’

We were fortunate enough to have our composer, Trevor Morris, come up with a version of it, and it all sort of came together in that beautiful moment. I think people got what they wanted out of it. Will we ever be able to duplicate that? I don’t know. The most iconic track and the most iconic moment. You only get that once.”

So if you’re like me, and hoping to get some “Divine Bloodlines“ love this season, maybe don’t get your hopes up yet. “It’s interesting because everyone has a favourite track. Sam has his favourite track, Adam has his,” Kolde said of future musical Easter eggs on the show. “It’s just about finding the right balance. The use of music and the effect of how it supports what we’re trying to do, narratively.”

But for all the glee of moments like that, it’s not really the gaminess”or lack thereof”that has allowed Castlevania to defy the dubious history of video game adaptations. For Kolde, at least, what’s made the show work is Ellis’ ability to take Castlevania‘s esoteric worldbuilding, created around the edges of the action that defined the games themselves, and turn it into a playground for his characters.

“What Warren was able to do was take, in terms of Castlevania 3, a story of most of which was in the instruction manual, and sort of understand the atmosphere and feeling, the things people are responding to.” he said of why he thinks Castlevania has worked as a TV show. “He was able to create these characters that didn’t exist, that people responded to, and put them in this world that was built based on the game.”

“To me it’s always that. It’s always the characters,” Kolde concluded. “Trevor Belmont, Alucard, Dracula…understanding the gothic elements, the horror elements, the elements of the story that people who fell in love with the games resonated with, and building characters in a story that sort of lived up to what they imagined.”

Castlevania returns for a third season on Netflix on March 5.