A glass box, no bigger than the size of the Tesseract, stands atop two marble-coloured obelisks. Inside the glass box is a copy of Cory in the House, the DS adaptation of the Disney Channel sitcom that lasted for two seasons between 2007 and 2008. Behind it is a regal poster for the namesake show. This is a serious shrine for a joke of a game.

“How does everyone else set up their Cory in the House displays?” a 27-year old Reddit user from Massachusetts named Yalik3that wrote late last year on the popular forum. More than 72,000 upvotes later, his shrine had proven to be the stuff of legends.

The Cory in the House DS game arrived in 2008, after an abbreviated development cycle from a small team at Handheld Games. Like many games of its type it wasn’t likely to be remembered for long. The game was a product designed to fool grandparents and five-year-olds in K-Mart checkout aisles, which was a gambit its development studio perfected in their other young-adult adaptations. (The Cheetah Girls: Pop Star Sensations, Nancy Drew: Message in a Haunted Mansion, and a Tech Deck skateboarding game, to name a few.)

Cory in the House was a bad adventure game wrapped around other braindead minigames. It was not the sort of product that critics needed to spend time reviewing, but some did anyway. IGN settled on 500 words and a 3 out of 10. The writer lamented the controls, and, for some reason, the lack of “hot girls” on the cover. Like everything else in the licensed tie-in boom in the mid-2000s, the game seemed destined to immediately disintegrate upon impact, leaving nothing behind other than the faint, slightly winsome memory of a gaming industry that could sustain smaller players like Handheld Games in the first place.

This basically came true in the years afterwards. Handheld Games went belly-up in 2009, and Cory in the House has been enshrined as arguably the most ancillary franchise in the Disney empire. (It’s hard to imagine a That’s So Raven theme park opening up in Anaheim any time soon.) But something started to change in the 2010s, as those who grew up with the Disney Channel entered their 20s and tempered their nostalgia with a caustic bite. Cory in the House, and particularly its DS adaptation, was becoming a meme.

“What does Cory in the House mean?” wrote a user on Reddit, three years ago, clearly confused why this very stupid show had become a torchbearer for the culture.

“[It’s] about a kid who lived in the White House because his dad was a chef there,” writes the top-upvoted response. “It’s generally regarded as terrible and people make fun of the video games based on it, and refer to it as an anime for some reason.”

You can find evidence of that reinterpretation anywhere you look on the internet. Users of anarchic video game forums raided the game’s User Review aggregators. Today, it has a 9.5 average on Metacritic. (“This game is amazing and saved my life,” writes one user.) It has an estimated length of over 70 hours on GameRankings. Cory in the House has been called the perfect anime, and its speedrun has been optimised to under an hour. Naturally, that record was logged on speedrun.com by a Twitch user named “ifknlovecoryinthehouse,” who pointed a video camera at his DS to get the footage. Yalik3that’s shrine was a perfect part of the chaos. The internet could’ve fixed its eyes on anyone, but after a few random strokes, it selected Cory in the House and Handheld Games. This remains bewildering for the design staff. Nobody thought anyone would give the game a second look.

“My first introduction to it even being a thing is, I walked into a room and my kids were laughing hysterically at some YouTube video,” says Akio Segawa, former Technical Artist at Handheld Games. “I was like, ‘What are you doing? What are you watching?’ They’re like, ‘Dad you gotta check this out.’ I walked over and saw they were watching [a Cory in the House] playthrough, and I just shook my head. That game was responsible for my rent. They didn’t believe that I worked on it. I had to go dig out a copy from the garage. To this day, it’s the thing my kids like to tell their friends about.”

Handheld Games was Segawa’s first job in the games industry. He describes the studio as a “meat grinder,” where projects were assigned on ridiculous deadlines. In total, Cory In The House took seven months to churn out, which was common for the company’s DS games. “I feel fortunate that I can look back on it and smile now,” laughs Segawa. “I remember being pretty stressed out at the time.”

James Lutz, who did animation on Cory in the House, had just graduated from the Art Institute of Seattle when he signed on with Handheld. Immediately, he was thrown into an office culture full of other kids straight out of college. Functionally, that meant a lot of crunch. “The games industry was the Wild West in the early 2000s,” he said. “You were pretty much signing up for overtime to become a pretty normal part of your life.”

Early on, while he was still getting his feet wet at a development studio, Lutz found himself in line for a Team Lead role, simply because he had about three more months of total experience than the rest of his peers. “I ran with it,” he remembers. It made sense, really. Cory in the House is a show about an anarchic teenager taking up residence in the White House; you could say that Handheld was following through with its own hierarchical debasement.

Cory in the House’s loose collection of minigames feels detached from any core design praxis. This isn’t unexpected, if you know the back story. Seven months is not long enough to make a quality product, no matter how ambitious or well-meaning a design team might be. What I didn’t expect was the sheer lengths that people like Lutz and Segawa were forced to employ in order to meet the ship date. Segawa initially told me that the mini-games from Cory in the House were borrowed wholecloth from the spare parts the team had lying around from other projects, but Lutz went even further.

“The whole game, not just the mini-games, was re-skinned from tech that we had used on all of our other DS games to that point. The majority of the art was created from scratch which helped hide some of the re-use, but not really,” he said. “By the time we were done making Cory the quality of Nintendo DS games were improving at a pretty rapid rate. A couple of other studios were proving to be really creative with similar licensed content, so people were less interested in what we were doing.”

Nobody I spoke to would claim that Handheld fostered a particularly healthy working environment. Constant overtime is slowly becoming a taboo in this business. But Lutz, like Segawa, is able to reminisce on some of the crunch fondly, in the same way that I retain a few glistening memories from the year I spent working in a pizzeria.

“The company had money coming in pretty steadily but the expectations were always out of any kind of realistic scope,” he says. “That frustration also gave the employees a bond that’s pretty hard to explain, constantly going through the fire together forged some pretty strong relationships.”

This is what happens in your early 20s. You’re young and (usually) still unburdened from parenting duties, retirement equity, and a veteran’s sense of how an office is supposed to function. In that bondage, there is freedom. Lutz described the Handheld headquarters in a way that reminds me of a dorm hall during finals week. “We spent a ton of time at the local pub, taking breaks to beat the hell out of each other in the parking lot with LARPing equipment, a breakfast syrup drinking contest, and an animal cracker eating challenge that ended pretty unceremoniously,” he says. One time they stole sleds from a neighbouring company and took off for a small hill near the office. Anything to break the tension from the constant deadlines.

Lutz says he learned early to stop reading reviews of his work. Everyone at Handheld was committed to the idea of building a respectable product, but you can only be set up to fail so many times before realising the fix is in. Eventually, he says, everyone started to treat the studio as “just a job.” “I honestly regret taking most things as seriously as I did,” he adds.

The resurgent memedom of Cory in the House has served as a mini-reunion for the ex-Handhelders. Old colleagues are reconnecting over Facebook, as they witness the second act of a game that never had a chance in the first place. “It’s crazy to think about the game finding this whole other life without us ever being able to plan for it,” finished Lutz. “I know that the Disney Channel was very popular with tweens at the time, so it doesn’t surprise me that it would be relevant for so many people, but I would have never assumed that their nostalgia would have included the game.”

I am one of those tweens that Lutz speaks of, and I felt like I had a native grasp on exactly what Cory in the House inspires in my kin. To me, it’s the disarming warmth of all the terrible licensed games we played as kids, crossed with the lethal irony that seems to blanket every internet joke—especially those that pertain to children’s media. Within that context, I did not expect to reach out to Yalik3that, the Redditor responsible for the Cory in the House shrine, and find the one, and perhaps only, authentic megafan of the series. 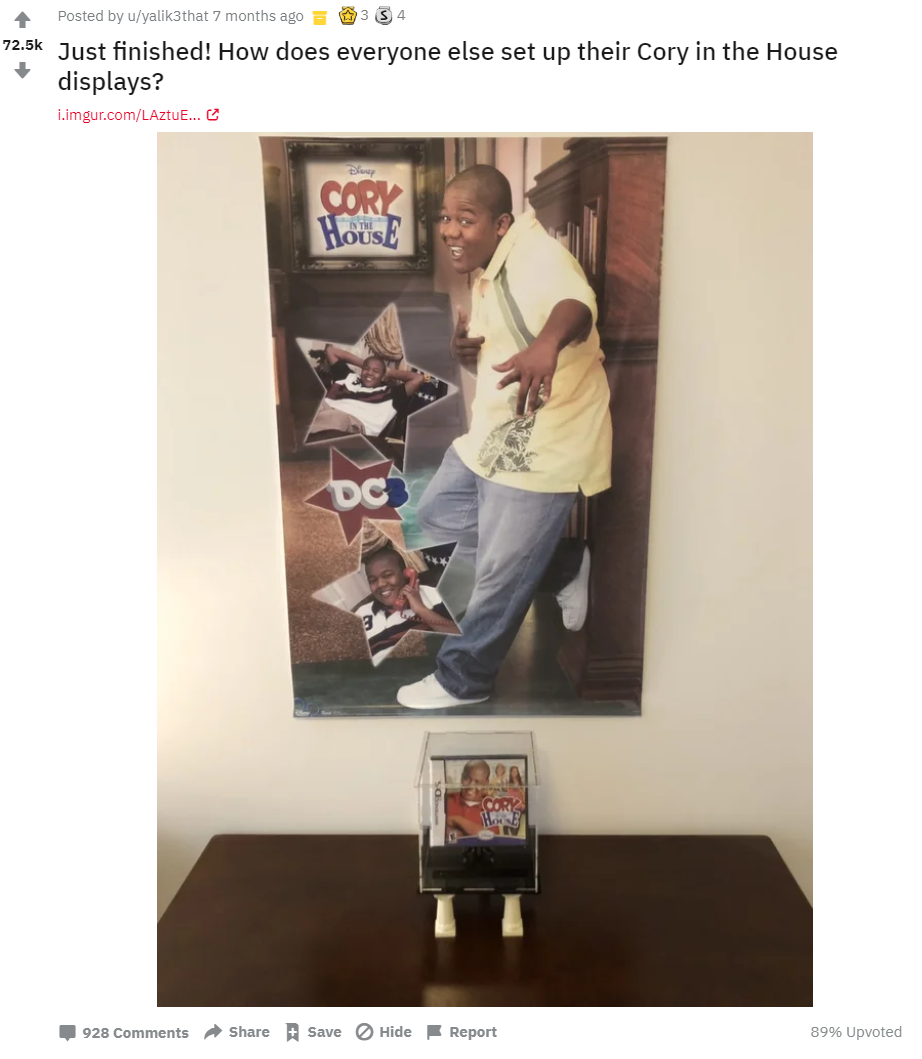 Here’s how he explained it to me: It was the late 2000s, and he had just bought a DS to play Pokémon Platinum. To celebrate, his friend purchased him a copy of Cory in the House as a joke. He never ended up playing much Pokemon, but the Cory in the House cartridge stayed in his DS for weeks. “While I do understand Cory in the House is now a meme, at the time it was just a fun mindless game that made me laugh with those classic one-liners,” he told me. “As someone who appreciates the sense of humour the show provided, the game itself mirrored the comedy quite well.”

Today, Yalik3that says he’s planning another post that features a brand new shrine. Redditors sent him a ton of Cory in the House memorabilia after he first went viral. He wants to showcase it all, like the official curator for a TV show that was never supposed to be memorialised. Let that be a testament to the work done by Handheld Games. Video games are strange creations. You never know who you’re going to touch, even if you’re crunching to get a dodgeball mini-game into a That’s So Raven spinoff.

“This game weirdly has had a pretty big impact on my life,” said Yalik3that. “I’m glad to see it still being recognised, even if only as a meme.”