what remains of edith finch One dry October morning in 2019, my father came to my apartment, already in tears by the time I opened the door, to tell me a family secret.

I was still in my pajamas. I’d planned to spend the morning playing a video game. By the time my father left two hours later, I, too, was reeling with the knowledge, and needed to distract myself from processing. Now, my need for relaxation and escapism wasn’t something I wanted—it was something I needed, fast. I headed straight to Twitter and asked for a recommendation for a new video game.

I said I was interested in weird, story-rich indies; the last two games I’d played and loved were Oxenfree and Night in the Woods. Almost immediately, two trusted friends mentioned a game I’d heard the name of, but didn’t really know anything about. I picked it up, excited to go into a new game with virtually no information, and also excited to escape having to think about my family for a little while.

The game, What Remains of Edith Finch, turned out to be all about the secrets family keep, why they keep them, and how those secrets impact each generation. It was not an escape. But it was cathartic.

Edith Finch takes place in the Finch family home on Orcas Island off the coast of Washington state. Over the years, additional rooms for additional Finches were haphazardly built atop the structure, giving it an unsafe and confusing architecture. The Finch family put airtight seals on each room when its owner died, making the house a collection of time capsules. Edith Finch documents her walk through the family home via diary passages, read out loud as narration while you explore.

The Finch family felt like a hyperbolic version of my own. What we lack in airtight rooms, we make up for in photographs. My grandfather’s house in Phoenix, Arizona has always had an entire room dedicated to photo albums, chronicling the family and its stories dating back several generations before his father immigrated from Sicily. My father’s college degree was in photography, and I am the only one in my generation, including cousins, who has not at least taken a photography class. But even I still have several DSLR and film cameras. 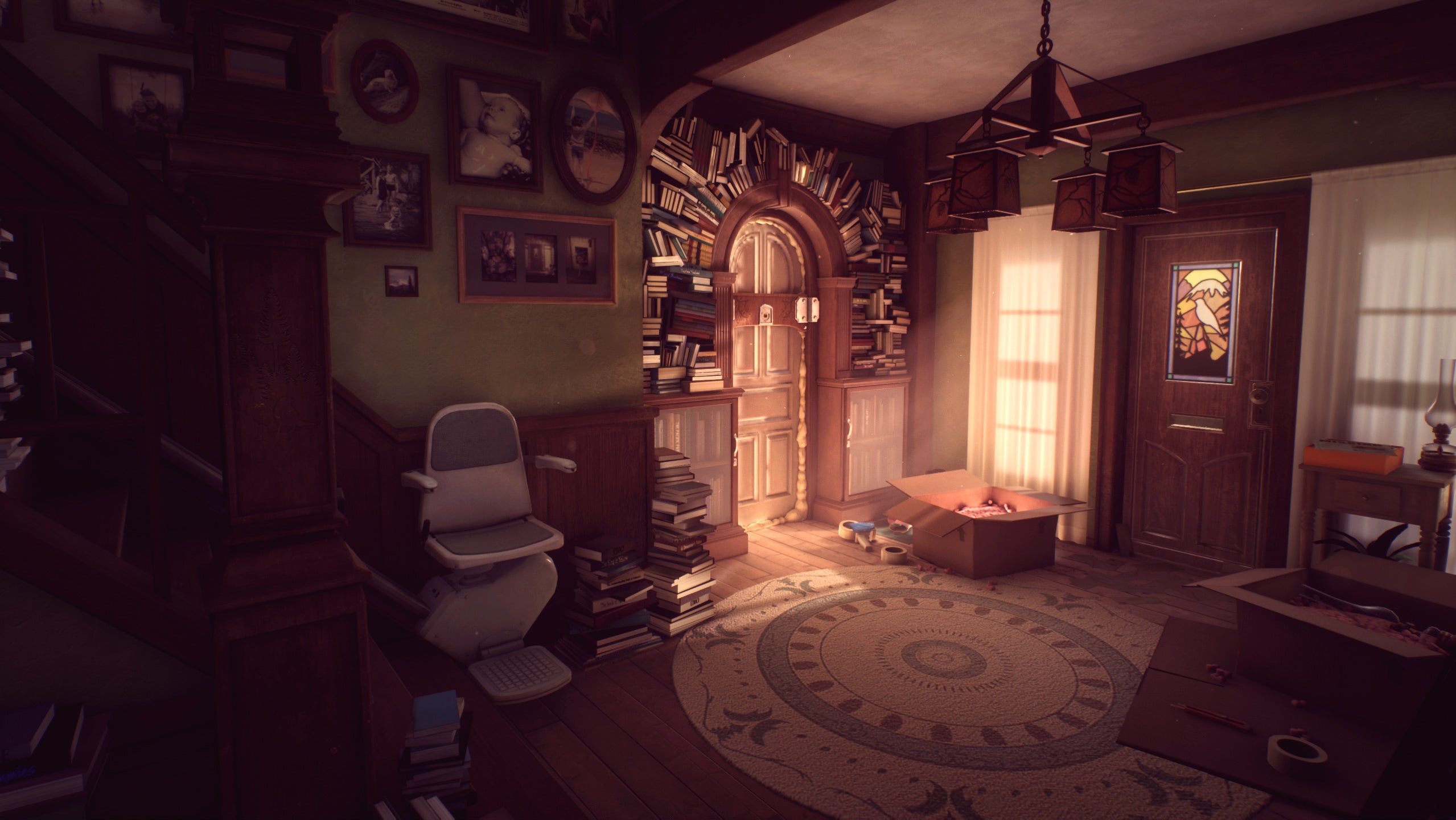 One of the first things I ever took a photo of was my grandfather’s fig tree in his backyard, grown from a fig from my father’s childhood home in south New Jersey, which was grown from a fig from the family’s house in Sicily. When my father pursued his degree at Arizona State, he wound up taking the whole family with him. My grandfather started teaching sociology at the university. Decades later, my oldest sister got her degree there. A decade later, I started working with students there, even though I always said I’d forgo the family tradition of attending or working at the school.

Growing up in the late 1990s in Gilbert, a budding Stepford-esque suburb of Phoenix, , I was always drawn to photographs of my grandmother, who died just after I was born. My family has always told me how much like her I am, both in personality and appearance. I have her curls. People tell me I roll my eyes just like she did. My birth name is almost identical to hers—my parents wanted to name me after her, but they were worried it was bad luck to name a baby for a woman who was, at that point, right on the brink of death.

In my most trying years, I would fantasize about my grandmother being alive. I thought she might have been the kind of person in the family I could tell my secrets to when nobody else was there for me. There are secrets I still keep from my family because I’d convinced myself that telling her ghost was enough. 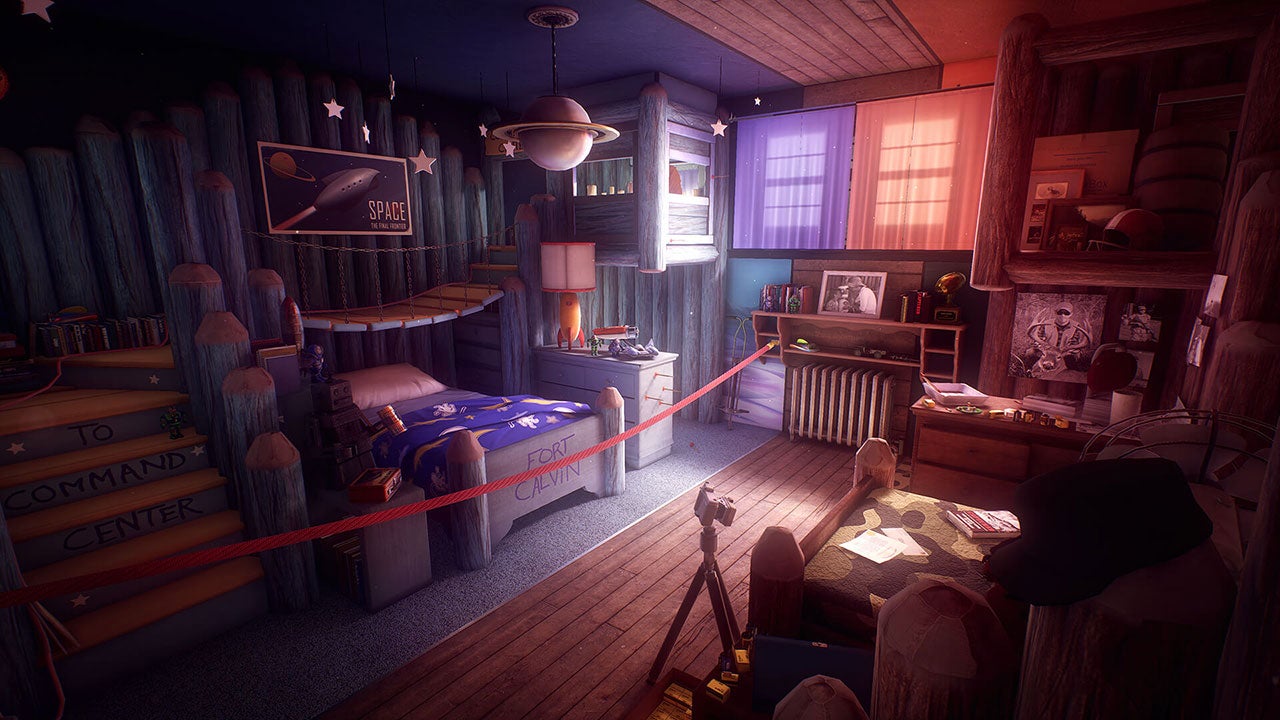 The first family member’s room you enter in Edith Finch is that of Molly, a Finch who died young. “I grew up looking at Molly’s room through the peephole,” Edith says in voiceover as you approach the door. “Molly always seemed like a girl I could imagine being friends with, if she hadn’t died in 1947.”

Molly’s room is brimming with character. Its pink walls are adorned with Rapunzel-eque golden swirls. A sea monster is drawn on a chalkboard, animal masks hang from the door, a deer skull perches on the desk. Molly loved whimsy and adventure, which is shown in a vignette you play through of the night she died. After eating poisonous berries, Molly hallucinates herself transforming into a cat, a shark, and the tentacled sea monster that eats her human body back in her room. The vignette is as beautiful as it is beguiling, leaving the player to make sense of what really happened. Molly is dedicated to her story. She did turn into those creatures. Some of the family believes her, or at least humours her; a family cat in a later generation is named “Molly” in her honour. To the player, though, it seems clear that Molly’s story isn’t reality.

After I finished Molly’s vignette, I put the controller down and thought about my family.

As it turned out, my father had actually found out our family’s big secret a few months before he came to my apartment to tell me. It was all thanks to the genetic testing company 23andMe, which promises to tell you all about your ancestry if you send them a swab of your saliva. Always willing to try any new method of enriching our family’s narrative, my dad, his brother, and their father thought it would be fun to look at their results and see what new information they could glean. 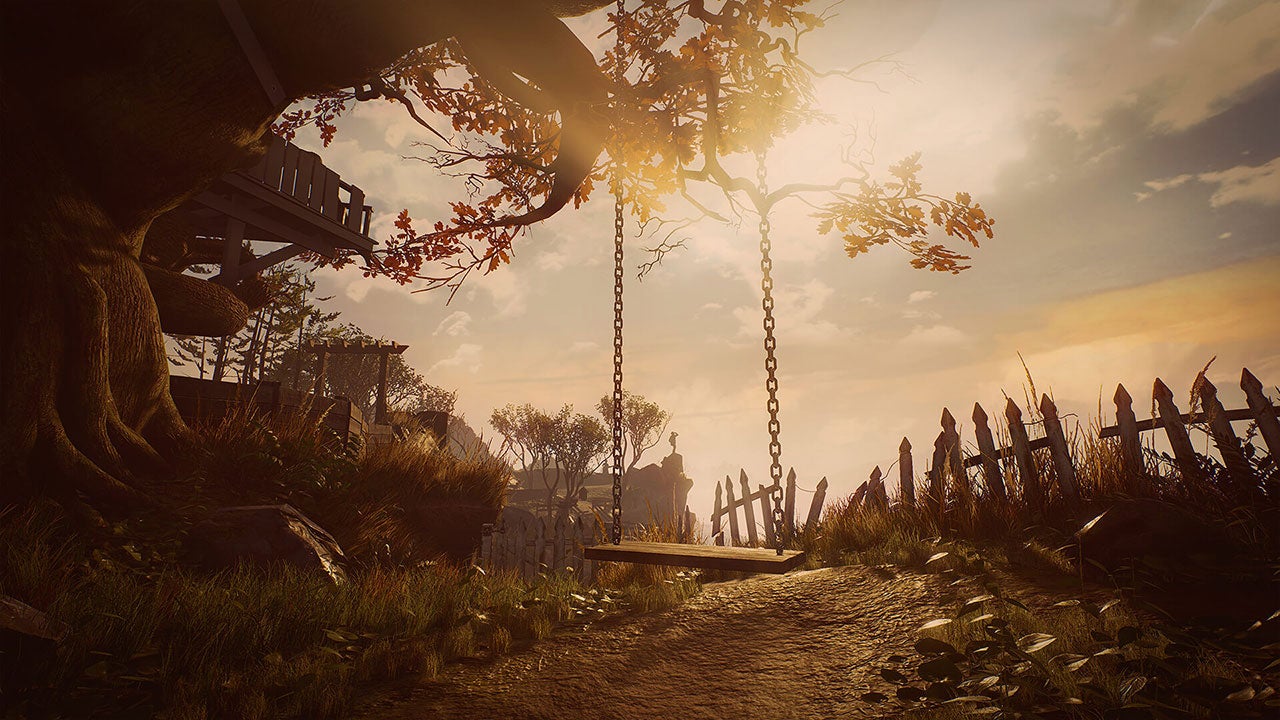 When my father and his brother connected their results to their father’s, they found out something they weren’t quite prepared for. 23andMe’s results showed that the man they believed to be their father was actually their uncle.

My grandmother, the woman who rolled her eyes just like me, the woman to whose ghost I whispered my secrets, had evidently had an affair with her husband’s brother for long enough to conceive both my father and his brother. The man I’d known all my life as “grandpa” was actually my great uncle. My biological grandfather, like my grandmother, had died years and years ago. Like her, he had taken the secret to his grave.

Logically speaking, this was not supposed to change anything. Everyone in my family agreed that what made a father was the act of raising a child, not biology. But I felt shaken and uprooted. Who was this man, my biological grandfather, who had had his own “real” family in my second cousins and their children on the opposite side of the country? Who was this woman, my grandmother, who was universally doted upon by my family, who I was compared to in my best moments?

My biological great-uncle—my real grandfather—took the news as best he could. “I wish she would have told me,” he said, “so I could have just let her be with the man she truly loved.” My father, telling me all of this, tried to take it as gracefully as he had. In an act of closeness he and I have never really had before, I curled up to him while he cried on my couch.

My father left my apartment after a long hug, both of us still shaken, but similarly insistent on not sharing that vulnerability with anyone outside those walls. I started What Remains of Edith Finch about an hour later. In that hour, I cried, and I stared at the ceiling, and I called my husband at work to explain to him what had happened. I had to explain it from the beginning several times, because it was too bizarre to sink in after just one telling.

As I continued to play What Remains of Edith Finch I stopped several times to process how I was feeling. I played the rest of the vignettes that showed the deaths of other family members. I flew a kite as poetry appeared on the screen, all the while ignoring an oncoming storm that would ruin an important family event. I played through another section, in which a factory worker daydreams about playing games to escape his humdrum life, and felt embarrassed, but seen, in my own attempt at escapism through this game. When I came to the end of a scene featuring fathers and photography, I sobbed.

A little girl who dies young, like Molly, can be depicted in a pleasant light from a sealed room, but it isn’t until you break in and read her journal that you can see her as complicated, sent to bed with no dinner because she was misbehaving. My grandmother can be depicted in the photos of her holding my father as an infant, celebrating Christmas at their new home in Phoenix, eating a fig with curls that look just like mine. There aren’t any photos that depict her yelling, crying, or frustrated. If any had been taken, that part of the story could be erased by just throwing the print and negative away. 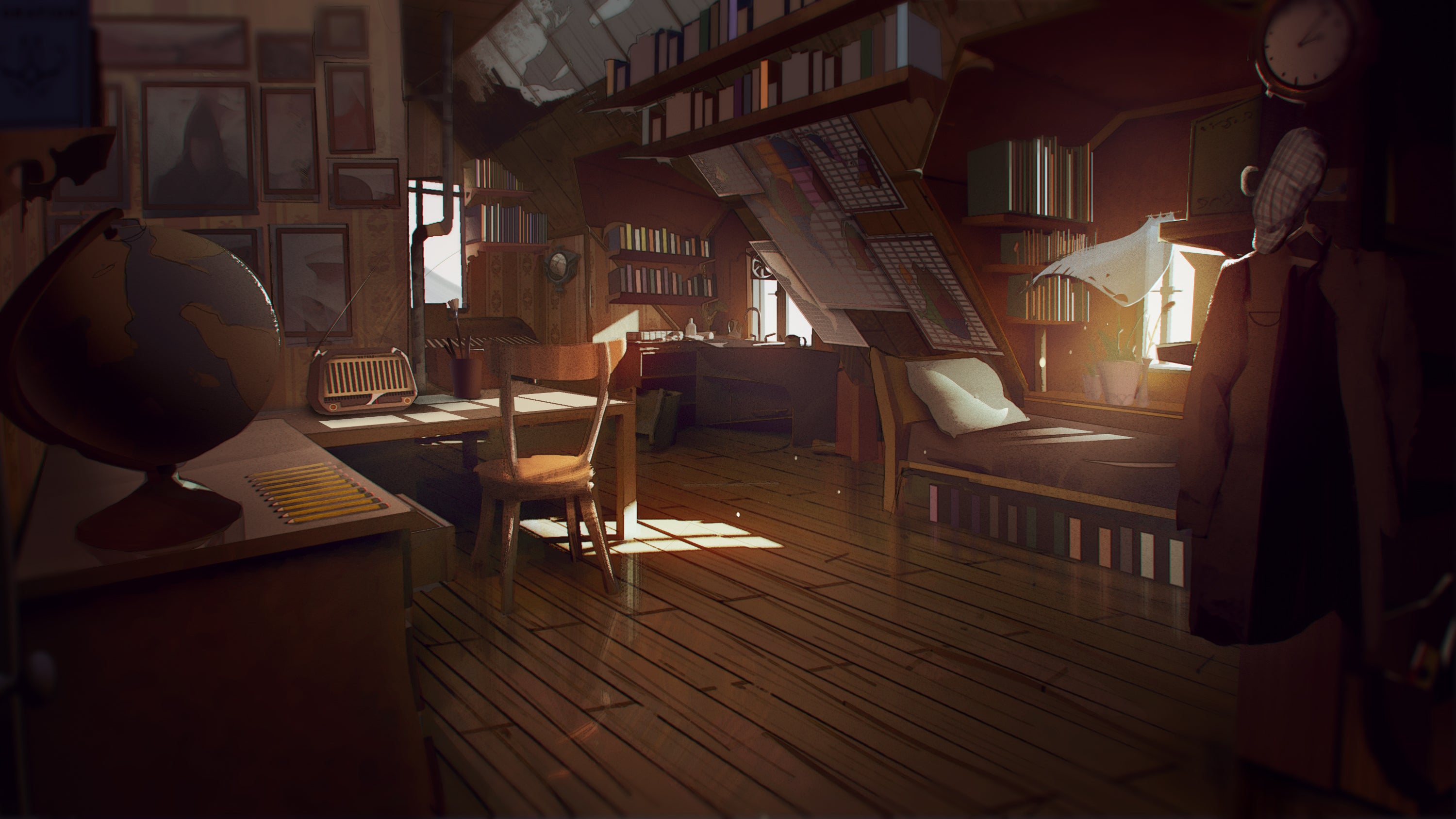 I don’t have a journal to tell me who my grandmother really was. She took this secret to her grave. All I have are the genetic testing results she never could have anticipated and can never answer for. But as I played more of the game, Edith processing her family’s secrets walked me through what that could have felt like. I put my own processing aside and, instead, tried to embody hers.

By the time I’d finished playing, I felt at least like I was standing on a solid wood floor instead of balancing on haphazard scaffolding. In exploring its nuanced and surreal takes on grief, family, secrets, and identity, Edith Finch helped me process my own.

This past Christmas Eve, preparing to visit my uncle’s house, I took my daily 60 milligrams of Duloxetine, an anxiety medication I knew I’d need more than ever. Not because we were all going to talk about our family, but because we were going to close it all up in a time capsule. As I looked around my uncle’s home, it struck me that there weren’t any photographs around. There was art, but only abstract. I wondered if he’d eschewed the family’s chosen art form on purpose, or if he’d just found discomfort or detachment from it before any of this came to light.

Wil Williams is a culture writer and devotee of weird media. You can find them on Twitter at @wilw_writes, where they’re probably talking about podcasts.