The students of Masegaki Municipal Elementary School showing off their quirks. (Image: Funimation)
To sign up for our daily newsletter covering the latest news, features and reviews, head HERE. For a running feed of all our stories, follow us on Twitter HERE. Or you can bookmark the Kotaku Australia homepage to visit whenever you need a news fix.

My Hero Academia‘s not-so-secret superpower has always been its ability to take the mainstays of superhero fiction and figure out ways to make them feel genuinely innovative and fresh despite the fact that they’re concepts we’re all more than familiar with. Take, for example, the idea that children born to superpowered parents are destined to be exponentially more powerful.

Because the world of My Hero Academia is one in which the vast majority of people are born with powers, the series puts a fair amount of energy into fleshing out the kinds of societal dynamics and ideas that most other genre stories don’t exactly have to think about.

In most western comics (and their animated and cinematic adaptations,) it’s rare that powered people and superheroes end up having children, which is a large part of why their having kids tends to be treated like an event involving high stakes and a disruption of the status quo. But because quirks are an everyday part of people’s lives in My Hero Academia, the series handles parenthood and how genetics influence one’s inherited abilities in a rather novel way.

In “Win Those Kids’ Hearts” and “Relief for Licence Trainees,” a number of My Hero Academia‘s heroes-in-training are forced to spend time with a group of children from a local primary school in order to improve everyone’s ability to connect with people and function better as a cohesive team.

As the older students are first introduced to the rambunctious and badly-behaved children, they aren’t exactly sure how they’re meant to interact with them, but the pro-hero Gang Orca is certain that their meeting will result in something fruitful for everyone.

Because of the schoolchildren’s behaviour, the hero students initially assume that their best bet at bonding with the children is to win them over and become friends, but all of their attempts fail because the children find their elders boring and generally uninteresting. When the older students shift gears and begin showing off their unique quirks assuming the kids will find them cool, the kids are similarly frosty. However, they also express that they believe their own super abilities to be superior, which leads to an intense, but still friendly play fight between the two groups. 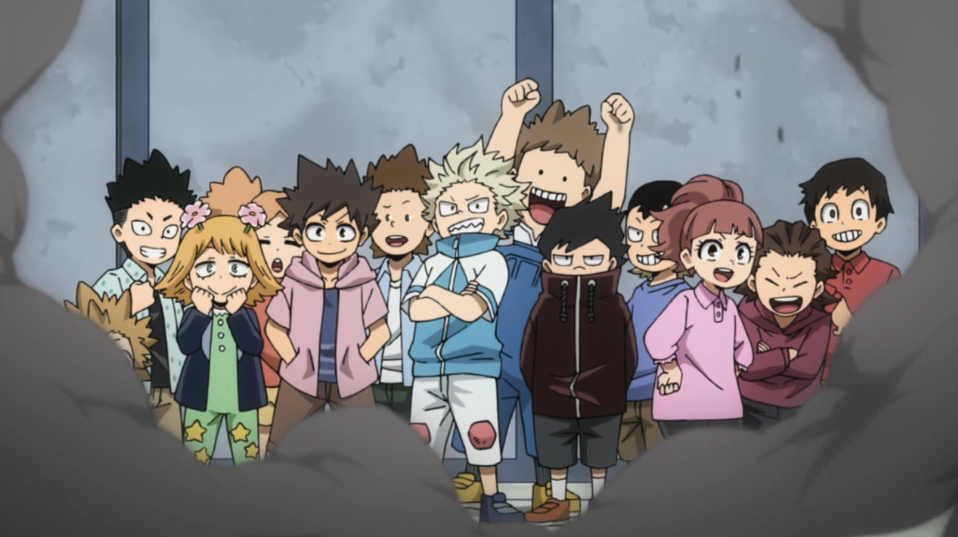 While most of the powers featured in My Hero Academia in the past were of the fairly standard variety”super strength, speed, and intangibility”the young students of Masegaki Primary School exhibit a variety of much more whimsical and objectively devastating abilities that shock the older pro heroes. As the kids show off what they can do, Seiji Shishikura takes a moment to explain to the adults that, as unbelievable as the kids’ powers are, they’re thought to be the result of the quirk genetics of multiple generations mixing and deepening.

While none of the kids are inherently evil, Shishikura explains how their very existence represents a potential threat to society because of the fact that they’re both more powerful than the generations of people who’ve come before them, and their powers develop at a much faster rate. Were the children to grow up to become villains, their abilities could make them so powerful that pro heroes wouldn’t be strong enough to take them on.

But the real danger, Shishikura elaborates, is the quirk doomsday theory”the idea that over time, the quirks children develop might become so destructive and uncontrollable that they could end up becoming dangerous regardless of whether or not they wanted to be.

The blending of quirks creating even more powerful heroes and villains has always been a core part of My Hero Academia‘s mythos. For instance, All-for-One (one of the series’ early main villains) is dangerous because of his power to steal and combine the quirks of others for himself. Pro-hero All-Might, on the other hand, keeps in the tradition of passing his One-for-All quirk that amplifies abilities of anyone who possess it down to a mentor, in his case Deku, the series’ primary protagonist.

Both All-for-One and Deku are powerful specifically because their powers lend themselves to the concentration and refinement of quirks within a single person. The dynamic between All-for-One and Deku has made for epic conflicts between a big bad and a boy who would save the world that would make sense for a more linear kind of story.

But between the Quirk Paradox Theory and in which Deku discovers a new way to use One-for-All, it feels as if My Hero Academia could be building to a more fascinating endgame in which subsequent generations of children born with quirks become unimaginable forces to be reckoned with.

Because super children are usually presented as rare oddities, there’s a way in which the momentousness of their arrivals tend to end up feeling kind of hollow as they end up becoming somewhat insignificant background characters in the larger stories being told (see: pre-Dawn of X Hope Summers.) But by making super children a fixture of its world and establishing that the mingling of quirks reliably results in exponentially more powerful quirks, My Hero Academia takes the superbaby trope and turns it into something legitimately interesting and pressing.

By these episodes’ end, the heroes-in-training do end up making friends with the Ã¼ber-babies, but there’s still no real game plan in place as to how the pro heroes might eventually have to deal with their offspring if and when they end up turning heel or, like Eri, becoming so prematurely powerful that they’re dangerous to those around them.