Outriders Is Like Destiny Mixed With Heart Of Darkness

Outriders’ art makes it seem like a grittier rip-off of Destiny, but having played the game for a couple hours, it feels more like Gears of War mixed with Mass Effect. It occasionally reminded me of a James Cameron sizzle reel: the bucolic paradise of Avatar giving way to the bloody horror of Aliens occasionally punctuated by the heroic carnage of Terminator. There’s some truth in each of these comparisons, though none of them feels entirely fair.

“We made an effort to not look at and draw from specific sources,” Outriders lead writer Joshua Rubin tells me when I ask him about the inspiration behind the latest game from People Can Fly, best known for Bulletstorm and the Gears of War game Judgement. “When we were in those hotel rooms working on developing the story, we were like, let’s throw all of our references out the window. Let’s do something really original.” Still, that didn’t stop him from later telling me that one of the best ways to think of Outriders was “Diablo with guns.”

Set to release this holiday on PC, PS4, Xbox One, and next-gen systems, Outriders is a third-person, post-apocalyptic, sci-fi loot shooter that pitches itself as more of a traditional story-based role-playing game than a multiplayer-centric experience. There’s three-person co-op, but the developers told me the game isn’t about re-running the same missions over and over again. I spent two hours playing Outriders at PAX East doing things I’ve done in plenty of other recent games. I gunned down legions of mostly faceless people who were inexplicably intent on killing me. Sometimes I blew them up with my strange, glowy mutant powers.

Often their lifeless corpses left behind a new assault rifle or helmet I could equip to boost my stats and make me even more deadly for the next encounter. Then a cutscene would play and my character would come to life, arguing with her comrades about how to survive the hell world they’re trapped in and momentarily convincing me that Outriders has an intriguing story to tell that might go beyond the vaguely explored conflicts and looting and shooting on which many similar games are premised.

“Earth is dead” reads the first bit of text that appears on the screen during Outriders’ prologue. Having decimated the planet’s ecosystem, humanity seeks refuge in the stars. They eventually find a new planet, Enoch, that might be just perfect for supporting life. The instincts for profit and exploitation that resulted in humanity’s exile also haunt them on their new home, where the humans discover a strange anomaly on it that kills most people who come into contact with it. Those who don’t die end up with strange new powers.

Within the first hour of the Outriders build I played, lush green valleys underneath bright blue skies gave way to dirt-filled battlefields that were indistinguishable from mass graves. After falling into cryosleep at the end of the prologue, my created character awakens decades later to find herself in a Max Max-like hellscape where two separate factions of humanity have been warring over Enoch’s scarce resources. Her role in this zero-sum conflict is unclear, but in traditional role-playing game fashion, my first couple missions consisted of rescuing old allies and repelling enemy raids. A sprawling encampment provided a home base with vendors to buy new gear from and the occasional non-player character to collect a sidequest from. But the real emphasis, at least in my demo, was on the combat. 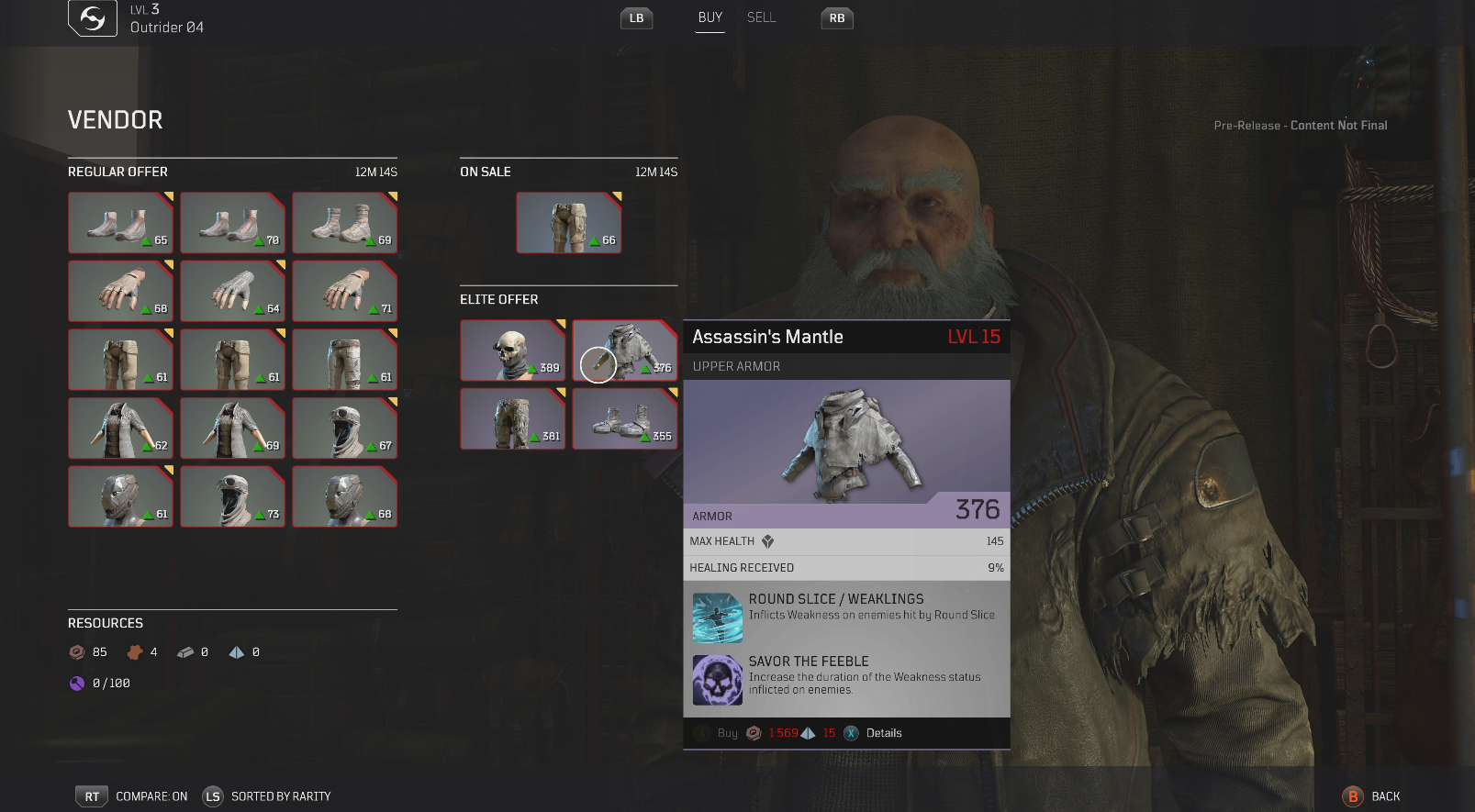 Altered by the anomaly, my character has access to one of three starting classes: Devastator, which is close-range and earth-based, Pyromancer, which has high damage output and long-range fire attacks, and Trickster, which makes her quicker and able to blink in and out of fights. A fourth class will exist, but People Can Fly wasn’t yet ready to show it off. I went with Trickster because it seemed like it might be the most unusual. The first ability I earned was a melee attack that caused enemies to turn inside out. The second created a big bubble that slowed down the enemies caught inside, allowing me to shoot them up as if I was using Max Payne’s Bullet Time. A third let me lock onto an enemy and blink into them, doing a small amount of damage and leaving me in a position to unload my shotgun. 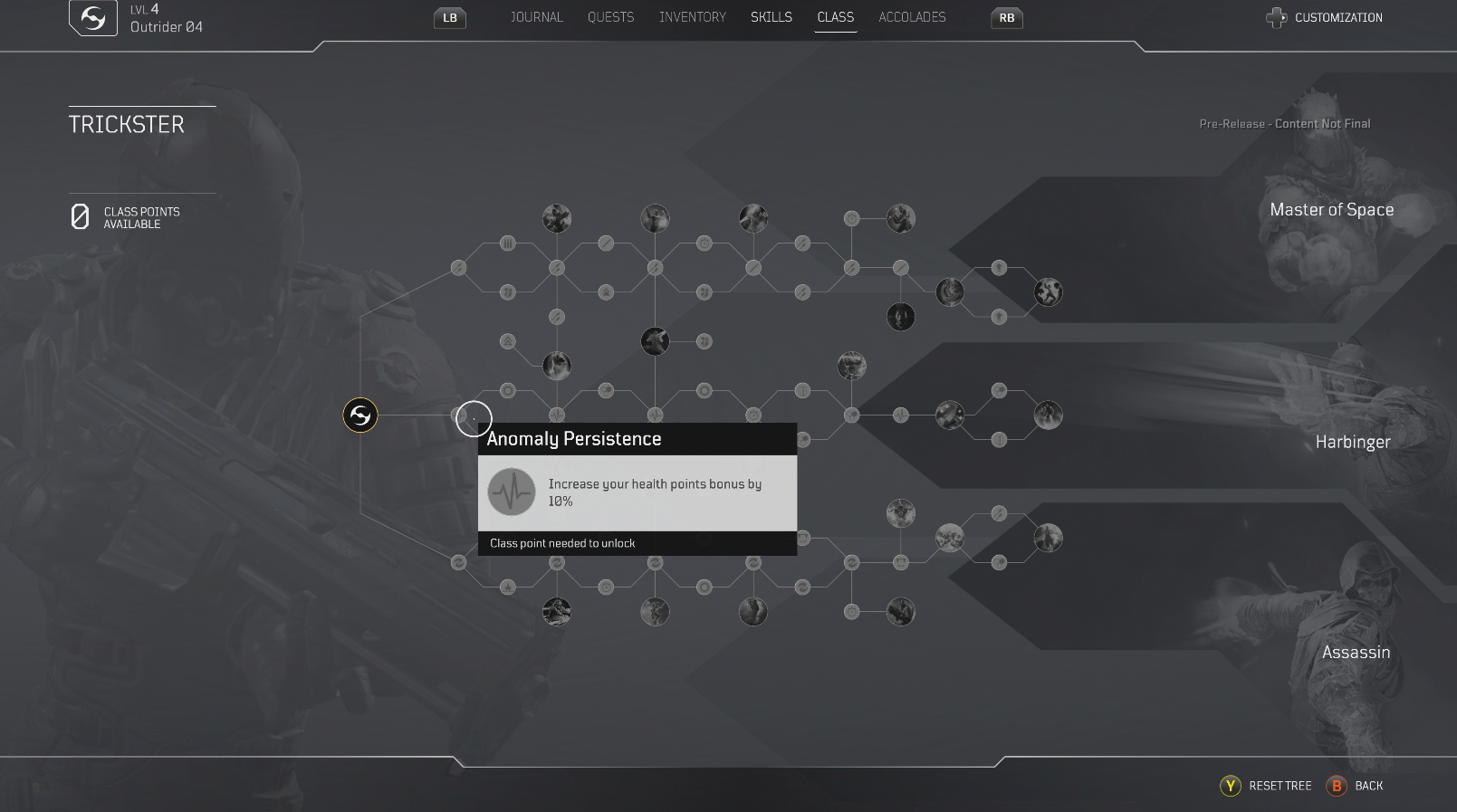 While these were the only abilities I had time to explore in the demo, each class has access to a large skill tree that’s subdivided into three branches, potentially allowing for a higher degree of build customisation than in some other loot shooters, as well as letting players take on unique roles within the three-person multiplayer squads available for all of the game’s missions. During the demo, though, I played alongside two other people and we spent most of our time firing at will. The chaos was satisfying to be a part of but also occasionally hard to follow, and because many of the enemies seemed to throw themselves at us head-on, it felt at times more like working in a slaughterhouse than battling for our lives.

Outriders does have two things that help set it apart from other loot shooters like Destiny 2 and Borderlands 3. The first is how health recovery works. Characters automatically heal a little bit when they successfully kill an enemy, rather than having health recharge slowly over time or from health packs dropped on the battlefield. This forces you to stick more closely to the game’s Gears of War-style cover-system, sprinting between barricades or around the perimeter of a fight rather than diving in guns blazing and retreating once you get hurt. 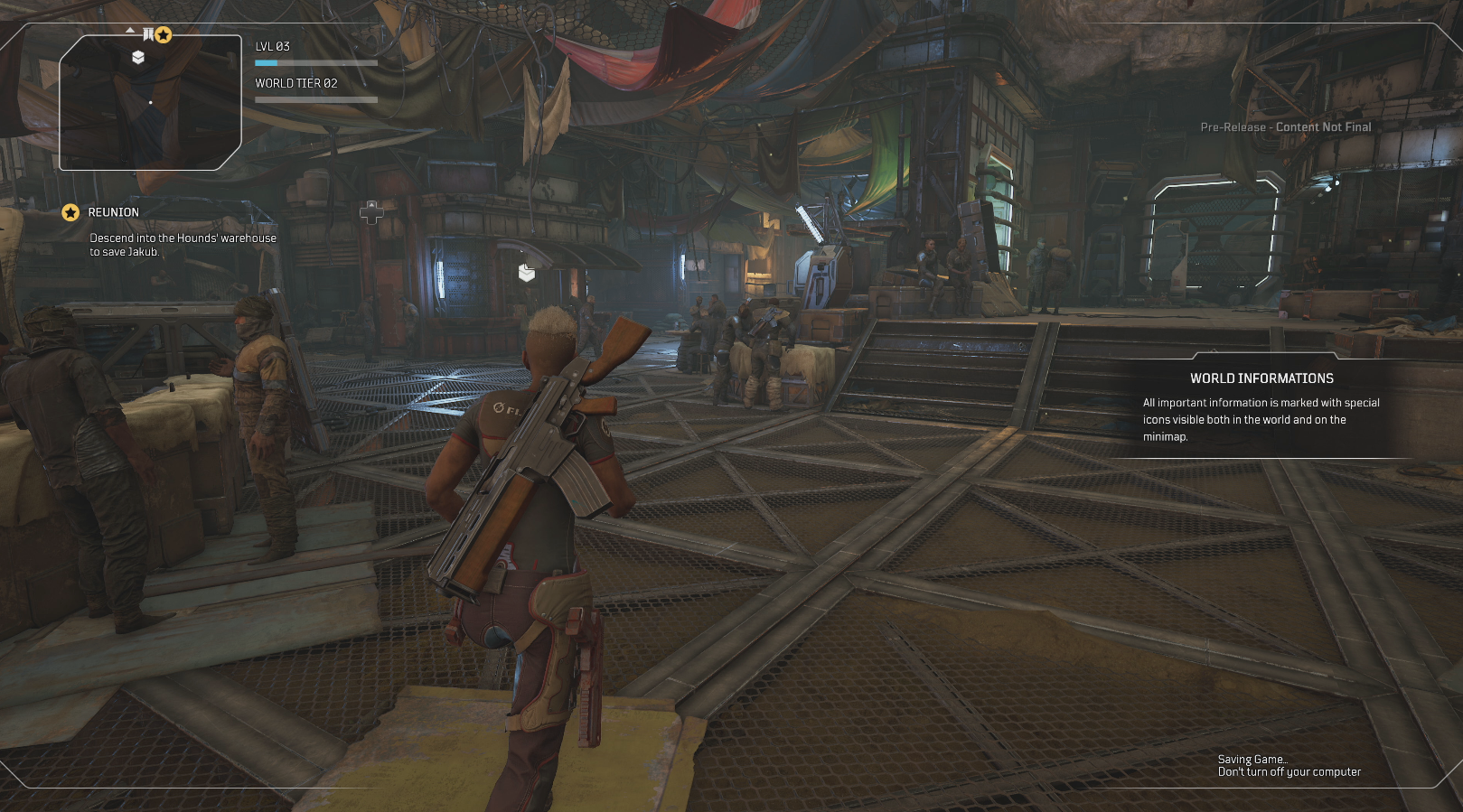 The second is Outriders’ difficulty system, which is called World Tier cards. These cards affect how difficult enemies are and how good the loot they drop will be. Higher level cards mean harder fights and better rewards. But instead of accessing these higher difficulty tiers by levelling up your character and getting stronger, People Can Fly says they’re unlocked simply by “playing better.” That means killing enemies faster, taking less damage, and comboing your abilities with allies will help you work toward unlocking the next World Tier. The developers wouldn’t go into detail about how the game calculates and tracks players’ improvement, but it’s certainly a novel form of progression compared to the power grind that players have become accustomed to in games like Destiny 2 and The Division 2. 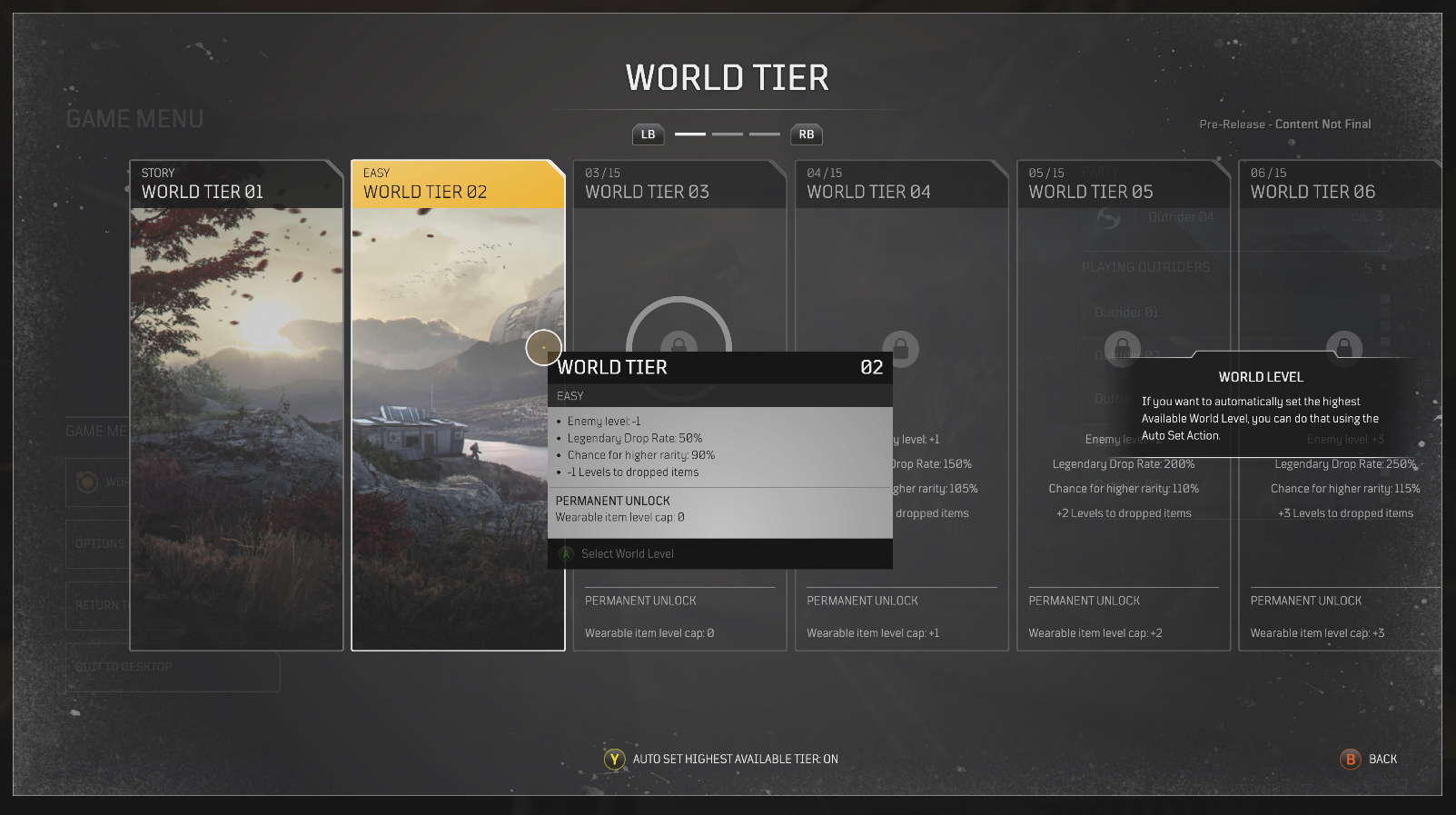 The studio has been adamant that it’s not treating Outriders as a service game. The developers I spoke with did not want to talk about DLC, microtransactions, or post-launch roadmaps. Instead, they said they’re focused on treating Outriders like a complete game “right out of the box,” at least when it comes to the game’s story. Rubin, who comes to Outriders having previously helped write Assassin’s Creed II, Destiny, and a number of Telltale games, talked up Outriders’ multiple hours of cutscenes spread out across the main campaign, as well as side missions, and the “Hollywood level” direction of it all. Whether these scenes will lead anywhere interesting is another question. The handful of scenes I saw left me wanting to learn more; the central mystery around the anomaly makes it hard to predict where the game will go from there.

“It’s a very brutal World War I level trench warfare at the beginning, and then it goes on and becomes something totally fantastic and different and weird,” said Rubin. “If anything we kind of looked at Heart of Darkness and the journey from the known into the unknown for guidance.” Other shooters like Far Cry 3 and Spec Ops: The Line have also taken inspiration from Joseph Conrad’s colonialist novel with varying degrees of success. It remains to be seen whether Outriders will be using that literary touchstone to effectively interrogate the human condition, or simply to try and give its hyperviolence a veneer of respectability. According to Rubin, the team is aiming for the former.

“We really wanted to say something that was meaningful and that held up a big fat mirror against the problem that is humanity and what happens when you take the last refugees of mankind and put them in an impossible situation,” Rubin said.

If Outriders manages to do that, it will have succeeded where many other games have failed. When it comes to narrative ambitions in the loot shooter genre, though, I’d settle for a story with a beginning, middle, and end.