panzer corpspanzer corps 2reviewslitherine
To sign up for our daily newsletter covering the latest news, features and reviews, head HERE. For a running feed of all our stories, follow us on Twitter HERE. Or you can bookmark the Kotaku Australia homepage to visit whenever you need a news fix.

The first Panzer Corps, released back in 2011, is one of the all-time great strategy games on the PC. Timeless and with an enormous library of extra content, its still a lot of fun even today, so it’s 2020 sequel has a lot to prove, and a lot to justify.

Panzer Corps 2 is your classic hexagonal turn-based strategy wargame, the second such major release of its type in the last six months after Unity of Command II. While leaning very heavily on the influence of 1994’s genre-defining Panzer General, anyone who has played anything from Fire Emblem to XCOM will know their way around the basics of Panzer Corps.

It’s a genre that’s frozen in time, which I’ve seen some people criticise when it comes to this game, but I don’t mind a bit. There’s a reason the two games I just mentioned have innovated off the battlefield, with stuff like relationships, loot and death, because the fundamental nature of turn-based tactics is so old and proven (thousands of years and counting!) that you don’t really need to do much with it

When it comes to the application of that in a Second World War setting, Panzer General built off classic tabletop wargames and almost perfected it, then when it got too long in the tooth Panzer Corps stepped in and repeated the feat. Now it’s Panzer Corps 2’s turn to bring that same formula into the 2020s, and for the most part it does a damn good job. 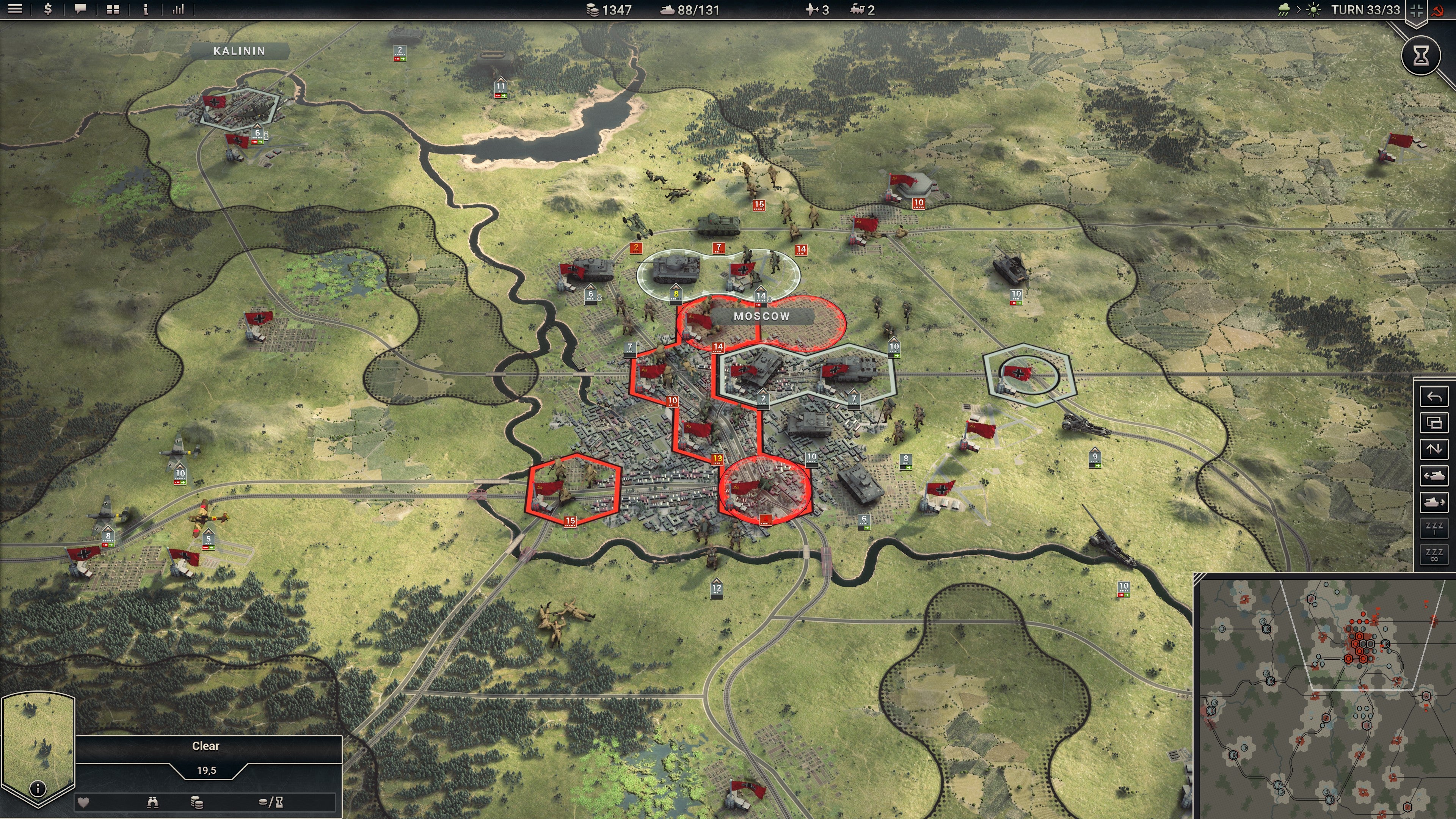 Some of the map design is fantastic. The battle for Moscow, for example, provides multiple opportunities for you to approach the city depending on how your army is built and how you want to approach the mission. You can smash your way across the rivers to the West, sneak through the northern approaches or flank around the more open spaces to the east.

In Panzer Corps 2’s campaign, the centrepiece of the game, you play a German General tasked with building an army then taking it through the entire Second World War, from Poland to France to North Africa to Russia and beyond. With each battle your units gain more experience and can be upgraded, and at points you’re given the chance to choose your campaign path, potentially leading to different battles and outcomes.

That’s exactly what you did in both Panzer General and Panzer Corps, though, so one of the things helping set this newer game apart is its massive graphical overhaul. It’s now the most visually impressive game of its type on the PC, with full 3D units that zip around the map, turn their turrets and explode beautifully. Indeed the whole screen, from the landscape to the custom paintjobs you can give each unit, is bursting with colour and vibrancy, which I really appreciate in games like this where all I’m doing 90% of the time is staring at the map.

Another big change, at least as far as my hazy memories of the older games are concerned, is the degree to which units differ from each other. In Panzer Corps 2 there’s an insane variety of units, with tanks numbering in the dozens, and they all have very different stats. Some variations of the same tank might be good against infantry, others against armour, and this is both tough to keep track of but also super important.

Send the wrong tank against the wrong enemy unit on the wrong terrain and it can be toast. But finding the right one, when at a glance they all look the same, takes a lot of study and trial-and-error (thankfully, at most difficulties Panzer Corps 2 has a very generous undo button). It can be immensely frustrating to flank your opponent with armour, dive into their unprotected infantry and find that the specific model of the Panzer III you’ve sent is useless for the task. 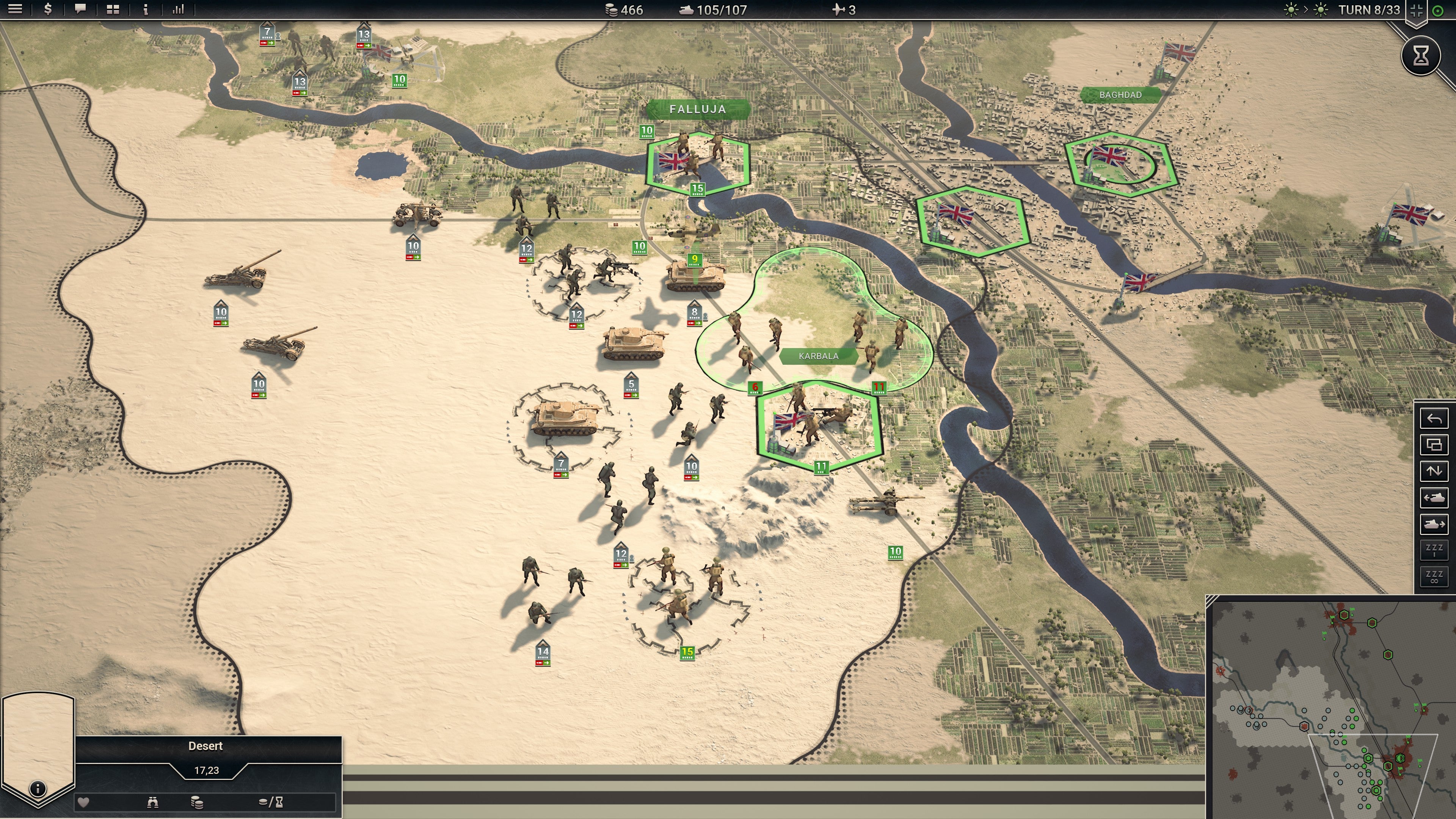 A chance to hear Arnold Schwarzenegger give you mission briefings

A fantastic mix of puzzle-like engagements with spacious strategic manoeuvring

Around 45 hours, completing the campaign once. I've circled back around and am now about halfway through my second run, taking in all the different missions in the branching campaign.

Once you get your head around that, though, you’ll start to run into what makes this such a great game, and such an improvement in many ways over its predecessor. In a similar vein to Unity of Command, though not as dedicated in its pursuit of it, Panzer Corps 2 can sometimes feel more like a puzzle game than a strategy one, as you slide your very specific units around the map looking to block and exploit weaknesses in your opponent’s likewise specific frontline.

Only here it’s more of what I’m after in these kinds of experience. Unity of Command felt a little too much like a puzzle game, without any of the scale or freedom I love from WW2 tactics games (Order of Battle does this really well, for example), but Panzer Corps 2 gets the balance just right. There’s enough unit variety to really mess around with different strategies, but once the enemy is encountered it’s still a fun little challenge seeing which way to crack them. And then once you’ve cracked them, there’s the joy of finding open space behind them for the satisfaction of some flanking and encirclement.

Not that Panzer Corps 2 reveals this for its first few hours. Your early advances through Poland and France are a little pedestrian, easy battles over small maps as you learn the ropes against weaker opposition. Once you hit North Africa and Russia, though, the game really starts to shine. These mid-war campaigns, along with battles in Italy, are almost perfectly-balanced, and were an absolute blast to slice my way through. 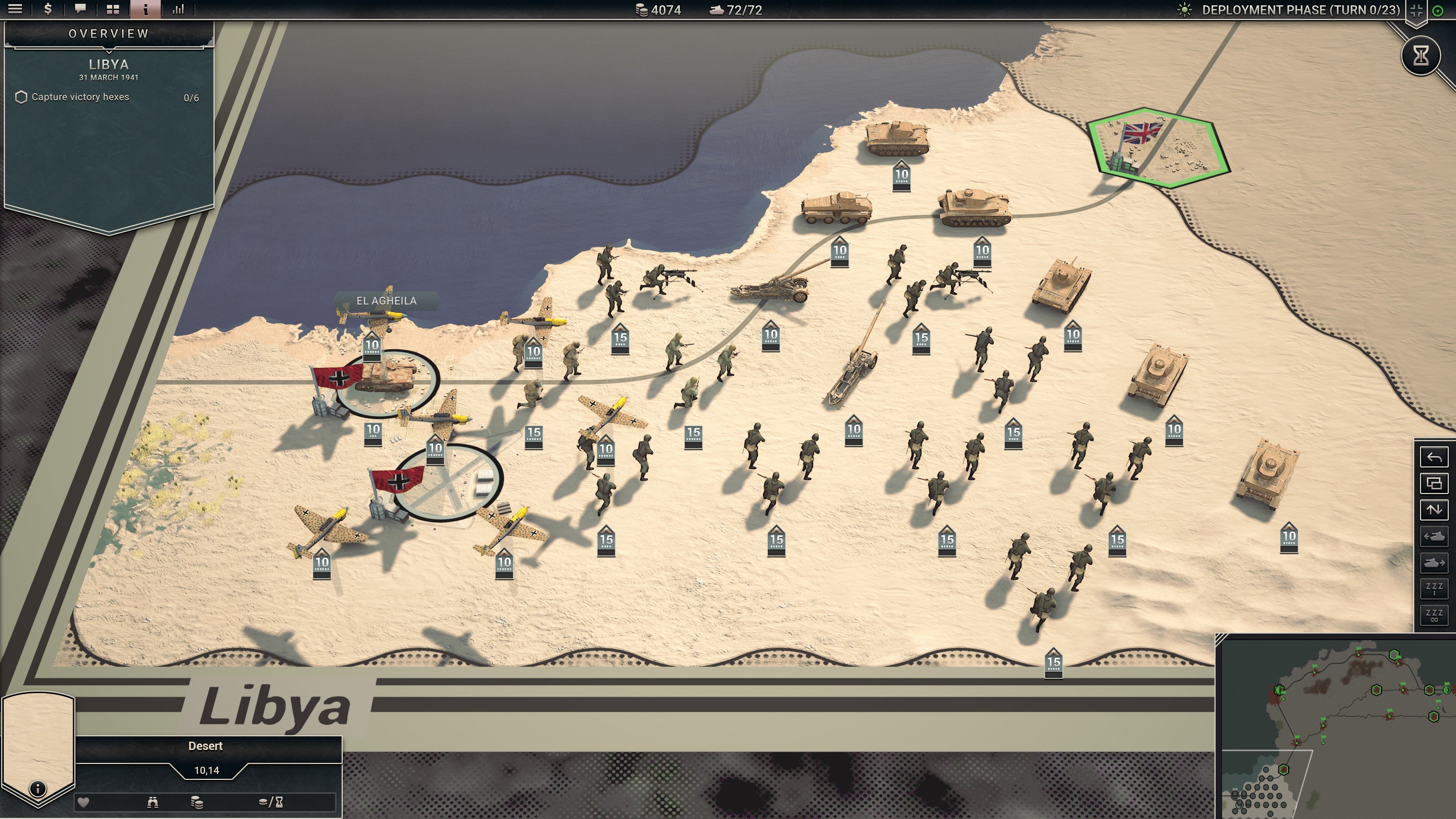 With every single unit having an idle animation, a wonderful little “toy soldier” art style and the ability to use custom paintjobs/camouflage schemes, you start to get surprisingly attached to your army as the campaign progresses, especially since once a unit is dead it’s dead and you can’t bring it back.

Sadly the campaign peaks too soon. Panzer Corps 2’s campaign has been designed to simply get harder the deeper you go, regardless of the supposed quality or state of your opposition, and the game gives up on trying to defeat you with strategy and simply hides loads of powerful units to rush you at your most exposed moments.

This makes completing the latter maps more a matter of learning the AI’s scripting than reacting to more organic strategies, which is a damn shame, since the final missions of a game like this—which like its predecessor involve pretty major historical what-ifs—were usually the most fun. Here, though, they’re just mostly some bullshit.

There’s only a few of them though, so it didn’t sour the entire experience for me. The branching nature of the campaign means a replay can get you a surprisingly huge number of all-new maps to play each time, and there are one-off scenarios you can play too along with an editor, so being let down by a few missions isn’t a deal-breaker in the grand scheme of things.

Plus as is so often the case with strategy games on the PC, and in this genre especially, I expect that in the months and years to come we’ll see loads of extra content for Panzer Corps 2, expanding the action to new theatres and giving us different factions to play as. Which in the long run would make this campaign’s bungled ending not really an ending at all.

Panzer Corps 2 had a lot to live up to, both because of its predecessor’s success but also the fact that publishers Slitherine have a competing series, Order of Battle, that already improved on so much of what Panzer Corps did.

This sequel does enough to justify standing on its own merits though, finding a cosy spot between its rival’s offerings. I’m normally always playing a game like this in my spare time, and I’m confident that this is the one I’ll be playing a lot more of through 2020.