Of the two hotly anticipated games released this week, most would assume Animal Crossing: New Horizons would better fit the bill as the self-care game. It’s a peaceful, low-stakes game where the most taxing decision you make is what wallpaper you want. Perfect for these times right?

But have you considered the therapeutic benefits of Doom Eternal?

In Doom Eternal you rip and tear your way through the legions of Hell that are threatening Earth. You play as the Doom Slayer, a silent protagonist who can commit all kinds of ultra violence using a cartoonishly extravagant arsenal.

While I haven’t been able to get into the guts of this game, watching early release footage on YouTube and Twitch has become a destressor for me.

I find it comforting to watch the Slayer chainsaw blade an imp to death or rip an eye out of a cacodemon. That feeling doesn’t come from that ‘fake violence as an outlet for real violence’ kind of way Congress likes to scapegoat whenever there’s a new mass shooting. But watching the Doom Slayer murder a demon in the most brutal way possible is comforting the way confidence and self-assuredness can also be comforting.

Before, It was difficult to connect with the Doom Guy as a separate character. In earlier games, he had been more of an extension of the player. Aside from a little avatar that displayed how much damage you had taken, you never saw his face, nor heard his voice. You were the Doom Slayer, and he was you.

In a move that might upset diehards, Doom Eternal allows us to take a step back from the Doom Slayer and stand apart from him. Instead of being the pilot of what’s essentially a blank slate, we get to see him as a fully realised, fleshed out, armoured up character with goals, motivation, and history. We aren’t the Slayer anymore, instead we become companions in the Slayer’s travels through a Hellish Earth and a stranger, arboreal Earthish Hell. 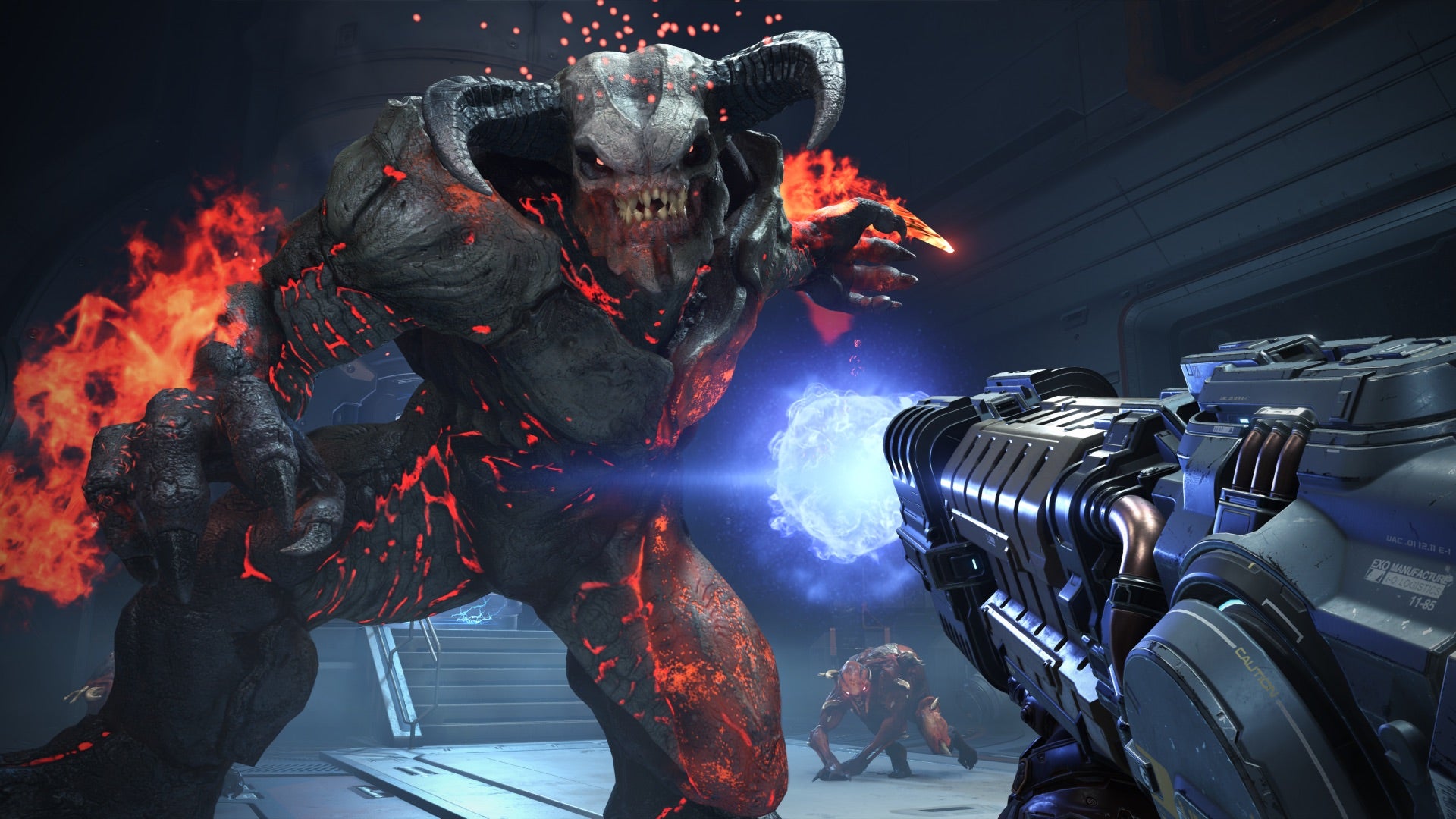 In a world of fear and anxiety, the Doom Slayer fears nothing. He is about his business of ridding Hell from Earth. He knows what he has to do, how to do it, and he moves with a kind of unshakeable confidence that’s so satisfying to watch.

The Doom Slayer has his shit together and holy shit do we need a character like that right now. As each day passes, the coronavirus whittles away bits and pieces of our normalcy, weakening a foundation that we knew was imperfect but could at least always count on being there.

People need an escape. With the ever-growing threat of the pandemic and it’s disruption of our lives, people need something that can divert their attention for a few hours. Killing demons with the Slayer proves to be one Hell of a distraction.

There are about fifty ‘leven different ways to kill a demon varying by the demon’s species and type of weapon used. You can punch them into a paste with your Blood Punch, or light them on fire with your shoulder mounted flamethrower (a personal favourite). Then there’s the chainsaw, and the pulse rifle, and the oddly intimate way you can pull apart a demon with your own two hands.

The Doom Guy executes these moves not with the precision of a surgeon, but with the brutal efficiency of a guy who’s done this shit thousands upon thousands of times and you are in my way, move I got shit to do! That’s what I love about the Slayer. He’s competent—a faculty that seems in short supply as people can’t make up their minds about whether or not social distancing is something we need to be doing.

When nobody knows what to do and nobody knows what can happen next or just how bad it can get, the Doom Guy looks at it all and says “I have a job to do.” That kind of resilience is priceless and damned hard to find.

While I would never model myself after the Doom Guy, I can take a bit of comfort in those qualities.

Millennials may look to Animal Crossing to fulfil the dream of being a homeowner with good credit and a comically low interest rate. Doom fulfils the fantasy of being someone confident in their purpose. Someone unshaken by the events of the world, able to look into the maw of despair and rip out its intestines with their bare damned hands.

The venn diagram for Doom fans and Animal Crossing fans is closer to a circle than you might think. The memes are right, Isabel and the Doom Guy would be friends. They’re two fiercely independent, competent, and confident people who pack one hell of a punch. And both of them, in their own way, are exactly what we need right now.

Ash Parrish is a freelance writer and a good mum to her dog and a bad mum to her plant. Read her rants about esports, video games, and her precious Shanghai Dragons on Twitter @adashtra.