Rebuilding A Virtual City As The Real World Crumbles

It’s a very strange time in the world right now, to say the least. As the world’s governments address covid-19, there’s one major nation that’s been dragging its feet: the United States of America. As Wall Street receives cash injections while workers worry about losing their jobs, it’s fallen to local communities to look after each other. I’ve found that spirit reflected in the games I am playing. It’s especially true in Final Fantasy XIV lately as players work together to rebuild the city of Ishgard.

In Final Fantasy XIV, Ishgard is a theocratic nation that fought a lengthy war against dragons. It was a war based on miscommunication and treachery, and it left the capital in ruins. That war was resolved in the game’s first expansion, Heavensward, which came out in 2015. Portions of Ishgard have remained in ruin since then, and it wasn’t until the most recent expansion that players started a rebuilding process. In practice, this means players must partake in special crafting activities to create unique items.

It’s a great way to level up skills like carpentry or cooking while also earning cool mounts to ride or outfits to wear. The more players contribute—sometimes through special “concerted work” events where everyone focuses on a single task—the more of Ishgard is restored. Servers progress at their own rate. My own server, Balmung, is a very social server known for roleplaying and crafting. Our progress has been swift.

As I see Ishgard grow and recover, the world outside my computer seems to be crumbling. Covid-19 was first seen in Wuhan, China in December and since then, it has spread elsewhere and has now been officially recognised as a pandemic by the World Health Organisation earlier this month. Some countries have ended up being more equipped to handle the pandemic than others. CNN reports that, for example, South Korea has managed to keep mortality rates from the virus relatively low as compared to Italy.

In the United States, many people worry the virus will hit harder due to a slow response by the federal government and the Trump administration, which seemed far more interested in downplaying the virus’ spread and protecting markets rather than enacting broad measures like aggressive tests to identify and treat patients.

Many workplaces have instituted work from home policies, including companies throughout the games industry. But working from home is a luxury, one that I am also allowed due to my job. Other workers aren’t as lucky. Gig workers and delivery persons continue their grind, and many local businesses like grocery markets have stayed open. Meanwhile, restaurants are subject to ordinances limiting their services, as public gatherings above a certain number of people are getting shut down.

In some cases, workers are being asked to take weeks of unpaid leave. Students are being removed from campuses as classes shut down or move online, and some universities, in their callous and cold judgment, have denied continued housing during the pandemic. Cities like San Francisco are asking citizens to remain indoors, despite that they’ve not yet sufficiently accounted for the homeless population.

The people in charge of the system were never interested in fixing it. In fact, the system was never designed to accommodate something like this. American society, powered by the ever-churning cogs of capitalism, is constructed such that vulnerable remain vulnerable and the rich remain rich. Covid-19 lays this bare. The protective actions that have been taken only serve to highlight how arbitrary our rules and laws are. We could have always removed old and vulnerable prisoners from our jails. We could have always limited evictions, particularly for those who are ill or in great need. And we could always, if politicians had wanted to do it, find the money to overhaul our healthcare system.

But, again, that’s not how a capitalist system works. By design, the system is meant to keep workers alive long enough to get profit out of them, to ignore others to the point of death, and to keep the most powerful people safe in their positions. The game has always been rigged. The people rigging it are the people who are, ostensibly, supposed to improve it. Instead, the United States lags behind on testing for the virus, jobs are threatened, and the institutions politicians are so damn proud of have been laid bare for the sham that they are.

This is not news. The reality we’re facing might have a new factor but the underlying structural issues have been there for a long time. Like the crumbling edifice of an ageing church, it was there for everyone to see. The only recourse will be to rebuild and ultimately reorganise our institutions into something equitable and functional. It will not be federal politicians here in America who get this done, nor will it be our president who rises to the occasion to fight the virus. It will be local leaders, unions, doctors and nurses, charity organisations, and volunteers. As I sink into Final Fantasy XIV from time to time and watch a fantasy city get rebuilt piece by piece, this has never been more apparent.

That sounds stupid as I write it. Restoring a digital city doesn’t compare with organising local relief in the real world. Still, the parallels are there for anyone to see. Ishgard was an inflexible, war-mongering nation wracked by a grand threat. That threat ultimately revealed the inherent weaknesses of the ruling class of nobles and the clergy. Ishgard’s ruin didn’t fall at the feet of commoners and impoverished. It was the result of conspiracies and violence from the ruling class that incurred the wrath of dragons. And while some leaders rose to the occasion to lead the reconstruction effort, the task of doing the menial work ultimately falls to players. 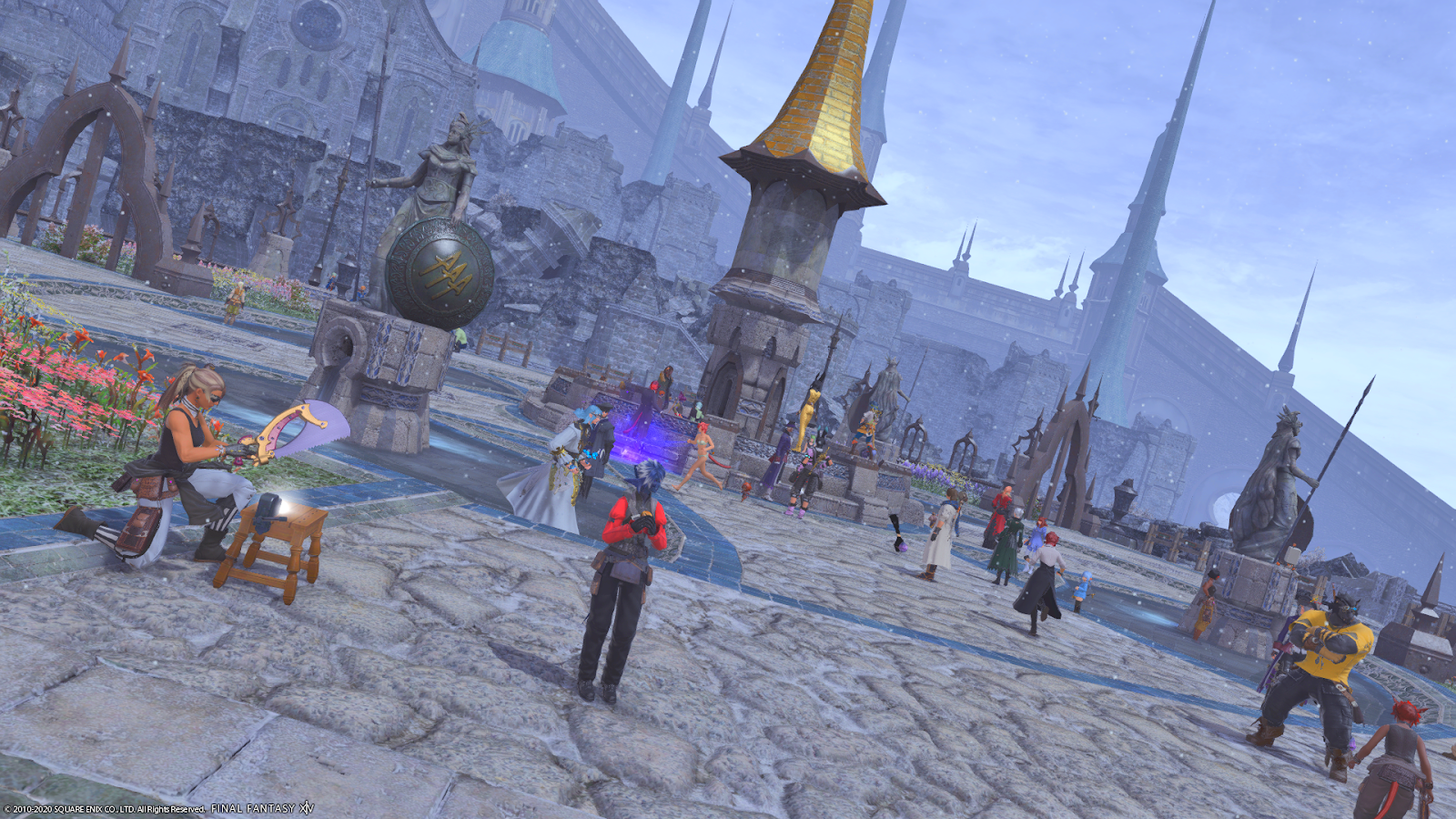 The result has been a remarkably swift and good-spirited effort by which crafters hand out gear to newbies, cooks hand out stat-buffing meals, and gatherers share excess materials like wood and ore with anyone looking for extra. The Firmament, the area of Ishgard where crafting efforts are focused, has become a truly cooperative zone. Rapid response and attentiveness has turned it from a rubble-laden debacle into a cleaner space. The workers’ area is packed with vendor booths and new benches. The central courtyard now has flowers and a fountain.

Non-player characters have flocked to the area, wandering around and adding fresh life and energy. The vague consensus among players is that we are building a new player housing district. Housing itself is a major issue in Final Fantasy XIV, because guilds sometimes buy out entire districts. The process of getting a home can take a day sitting at your computer, hoping you’re lucky enough to win a bid or click on the purchase sign before anyone else does. In rebuilding Ishgard, this problem will hopefully be addressed.

This will ultimately have to be the solution in the real world as well. While local governments move to ensure more rapid testing for covid-19 cases, neighbourhoods and communities will need to come together to support businesses and restock food kitchens. As students and others are potentially forced out of housing, those who can spare the space for friends or strangers will need to step up to the plate. The elite will not work to save the vulnerable. Even if they take action, it will be a token. This morning, former New York City mayor and presidential candidate Mike Bloomberg committed $US40 ($67) million to fight the pandemic.

He is worth $US60 ($100) billion. Whole Foods, a grocery chain owned by Amazon CEO Jeff Bezos, is asking workers to “donate” their time off between each other. If he wanted, he could donate thousands of dollars to each of his workers and still have billions of dollars. If the White House wanted, the trillions going to markets and firms could go directly to citizens.

Inequality isn’t a flaw of capitalism. It is a feature. In crisis, this truth becomes even more apparent. The solution is the same in reality as in fantasy: lift each other up. Work as a community of interconnected peoples to protect and foster the disadvantaged. That’s certainly harder work than building a make-believe city in Final Fantasy, but if Ishgard can recover from dragons, we can recover from this.