I’ve been playing Super Mario Bros. 3 on my Nintendo Switch lately. It’s been reminding me how the Angry Sun, an enemy that appears in the fifth level of the game’s Desert Land, provoked terror in me when I was young. Its implementation is a lesson in narrative level design and accomplishing less with more.

The Mario franchise excels at creating ‘Worlds’—collections of levels that share some common, underlying motif. Super Mario Bros. 3’s Worlds are all vastly different from each other, and each adheres to a specific ethos. World 3 is aquatic, with levels that are completely or partially submerged in water. World 6 is wintry, with slippery platforms and Munchers—indestructible Piranha Plant variants—frozen in ice.

World 2, where the Angry Sun debuts, is a massive desert. Other Super Mario Bros. 3 Worlds have design elements that create ambience: a coral reef to create the impression of an ocean, a twisting mass of pipes to create the impression of an underground sewer.. But for the Desert Land of World 2, Nintendo’s developers stripped almost everything away aside from the bare essentials. 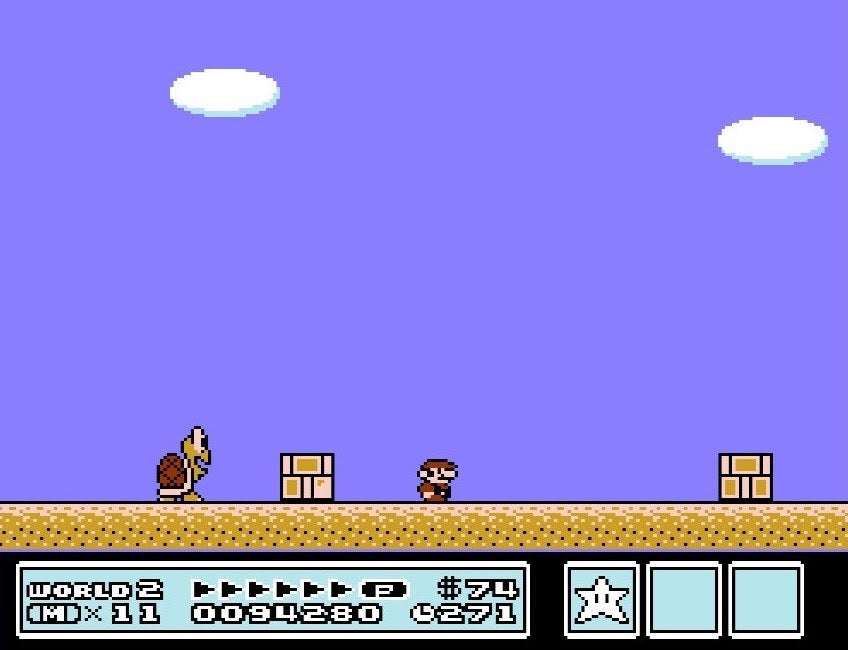 The Desert Land’s landscape is flat and severe. Anything you jump on, such as the blocks stacked in pyramids, disrupts your movement; it always feels like Mario’s foot is getting caught on the edge of a block. The Desert Land—at least until the Angry Sun level—is the slowest, least traditionally “fun” World in the game. But then again, real deserts aren’t that fun either. 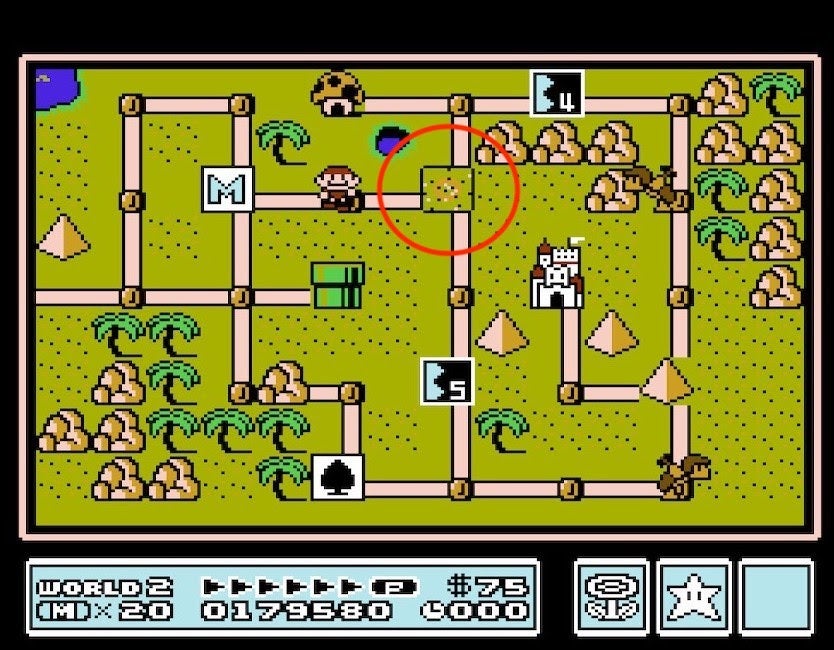 Midway through the Desert Land, you see a level on the map that’s represented by a patch of quicksand. Up until this point, all non-Fortress, non-Airship levels were labelled numerically. This patch of quicksand is a break in the established formula; we know we’re going to get something unconventional, but we don’t know what.

We quickly see what’s wrong on the level’s first screen. There’s the Angry Sun, with teeth bared and brow furrowed, in the upper left-hand corner of the screen. 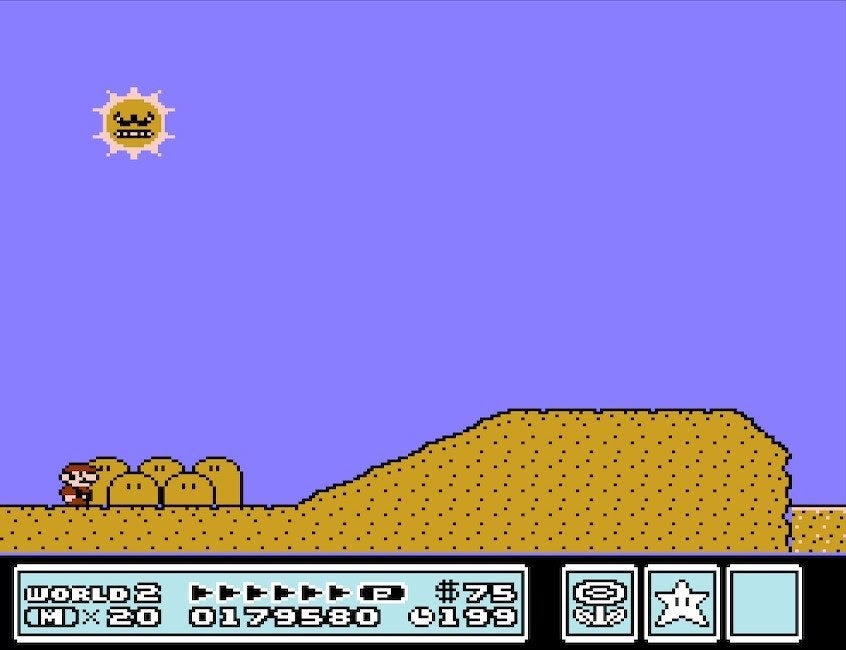 The Angry Sun reinforces the desert theme. For the first half of the level, it merely scrolls along with you as you move to the right. There are several pits of quicksand, which will pull you under should you fall into them. Piranha Plants aim fireballs at you as you negotiate the uneven terrain, which increases the likelihood of missing your jump. 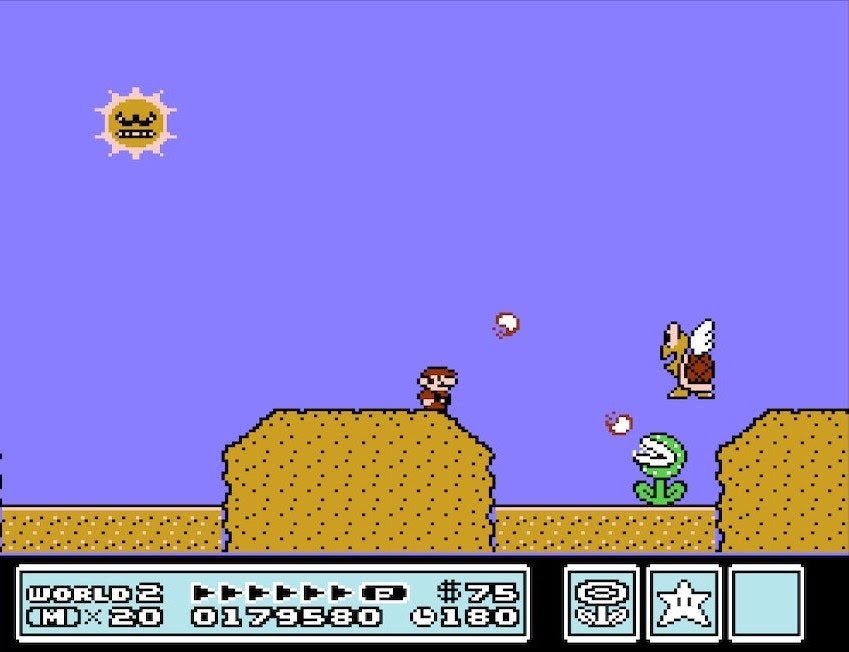 Then you come across the first and only tornado in the game. If you walk or jump directly into it, you get trapped and the tornado blows you backwards. To get past it is counterintuitive: You run at top speed and launch yourself directly at it. With enough momentum, you fly over or under it.

Fortunately, the tornado doesn’t hurt you. But if it makes contact, you spin about helplessly as the Angry Sun hovers in the corner with a fixed, menacing expression, like an 8-bit Sword of Damocles. You have no control, which is anxiety-provoking.

Mario games live and die by their exactitude. The controls are unusually precise, and the rules are simple but consistent. Mario does exactly what you tell him to do, and the environments react, every time, in the way you expect them to.

The Angry Sun level challenges that comfort. Between the quicksand, the weirdly inclined terrain, the Piranha Plants, and the tornado, you get the impression that the environment has rebelled against Mario. Nature itself is your enemy. The figurative solid ground you once stood upon is pulled out from under you.

And then the Angry Sun begins dive-bombing out of the sky.

It begins by doing a windup in the top left-hand corner of the screen. It spins very quickly in a tight circle several times, suspensefully delaying its attack. Then, it dives downwards to the bottom-centre of the screen before arching back up to the top-right corner, where it winds up and repeats the pattern. If you stay still, the arc is predictable and consistent. But if you walk to the right or the left, the arc is foreshortened to adjust for your movement. It creates the feeling that the Angry Sun is changing its trajectory, mid-flight, to hit Mario.

The first time this happened to me, I was eight years old. My hands shook and my heart beat out of my chest. So many of Mario’s enemies are impersonal antagonists; they walk in a straight line and largely mind their own business unless Mario crashes directly into them. But the Angry Sun feels purposefully malicious in a way that a Goomba or a Hammer Brother does not. 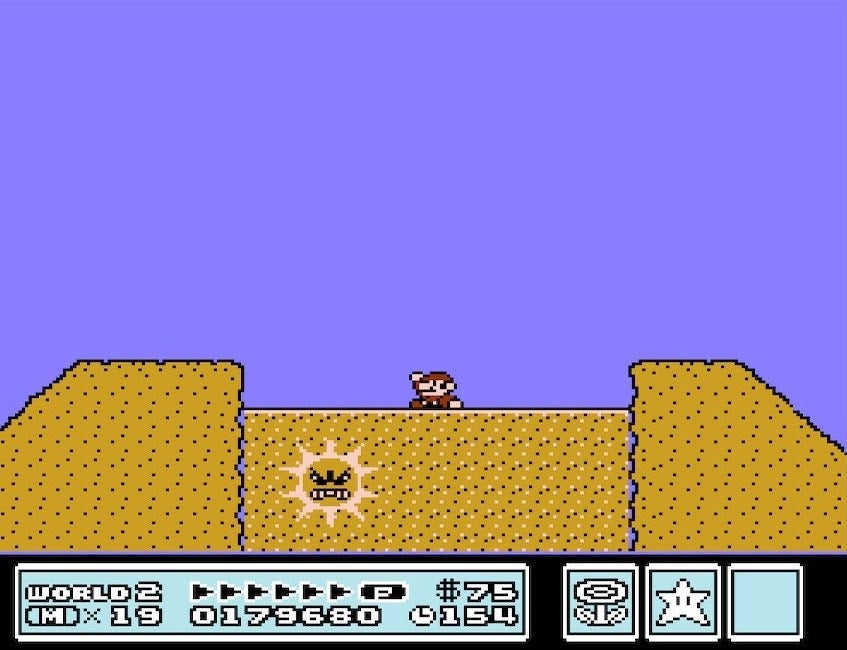 When I was little, I wasn’t thinking along the lines of killing the Angry Sun. I sprinted towards the end of the stage in a mad dash, which led to all sorts of mistakes. You can, for example, get yourself stuck in the deliberately large quicksand pit near the end of the level. If you mash the Jump button to get out of it, you do these tiny bunny hops and sink back into the sand. Getting out of the quicksand requires calm—you have to time your jump at the exact moment that Mario’s feet are above the surface. But try doing that while the Angry Sun is attempting to murder you.

Once you complete this level, you get a reward for your troubles. The next world is essentially a bonus level: an oasis with palm trees and a massive pool of water, stuffed with tons of coins and few obstacles. It’s a moment of calm after the hell you’ve just been through. 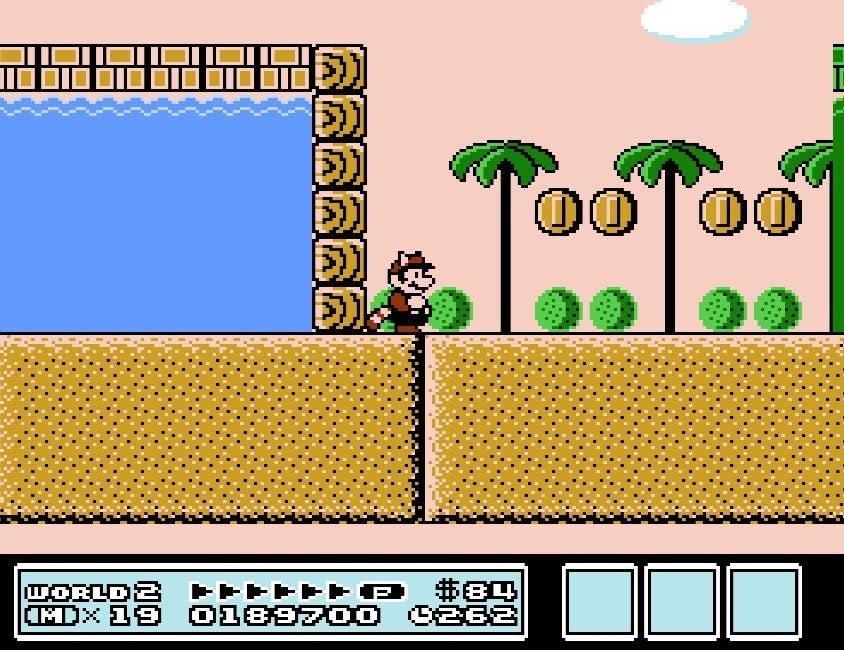 Super Mario Bros. 3 slows things down at the beginning of the Desert Land, speeds things up to a breakneck pace when the Sun attacks you, and then slows things down again once the level is complete. It’s a push-and-pull dynamic—a cinematic trick—that’s deliberately unsettling. As Alfred Hitchcock put it, “Always make the audience suffer as much as possible.” With the Angry Sun, Super Mario Bros. 3 knew how to make us suffer, only to lull us back into a sense of security so we could suffer again as the game continued.