The Longing, Which Can Take Over A Year To Finish, Encourages You To Embrace Waiting

At the beginning of the PC game The Longing, your character, a skinny gollum called a Shade, is ordered to wake their giant stone king in 400 days. The game starts with the king going to sleep, after which point a real-time counter starts. The Shade then has to somehow pass 400 real-time days in a dark, confusing cave system. What you do in that time is up to you, but whatever it is, it’s going to take a while.

Time in The Longing ticks down whether you’re playing or not, so you could technically open the game, close it again, and come back in a little over a year to see the end. If you’re not excited to spend $20 on something that just takes up space on your hard drive, there are some ways to pass the time in The Longing. You can explore; the Shade walks almost unbearably slowly, but it’s not like you’re in a hurry. The game has a menu where you can bookmark places and direct the Shade to automatically walk to them, and you can also have the Shade wander at random.

These features are helpful, since there’s only a very rudimentary map (which you may or may not happen to stumble upon), and the caves are easy to get lost in. There are some areas you’ll want to return to later. I currently have a few more days to go before a stalactite falls, and when it does, I’ll be able to direct my Shade further down a certain passageway. In two weeks the game says a pile of moss will be big enough for me to jump on to reach an enticing pickaxe that will hopefully open up new places to go and things to do.

I’ve also found a few ways to make time go faster in-game. Decorating the Shade’s cave home with drawings or with items you find on your explorations makes the timer skip a few seconds when you’re at home, as does reading in-game books (you can actually read them in real time along with the Shade, or set the Shade to read them on its own). The countdown can be further rushed by lighting a fire with coal you can find while exploring, though the fires go out and have to be relit in order to maintain the time bonus.

According to the developer, there are four endings, not all of which take 400 days. The Steam forums suggest it’s possible to escape the caves, though with my Shade at day 395 thanks to the fact that I only just started playing last week and got some time bonuses, I don’t think I’m anywhere near accomplishing that goal.

Developer Anselm Pyta told Kotaku in an interview last year that trying to speed ahead by messing with your computer clock will end you up in a dungeon, though I haven’t tried this myself. I don’t know exactly how long it will take me to see an ending of The Longing, or even how long it will take until it feels like something happens, but I don’t think it’s going to be soon. 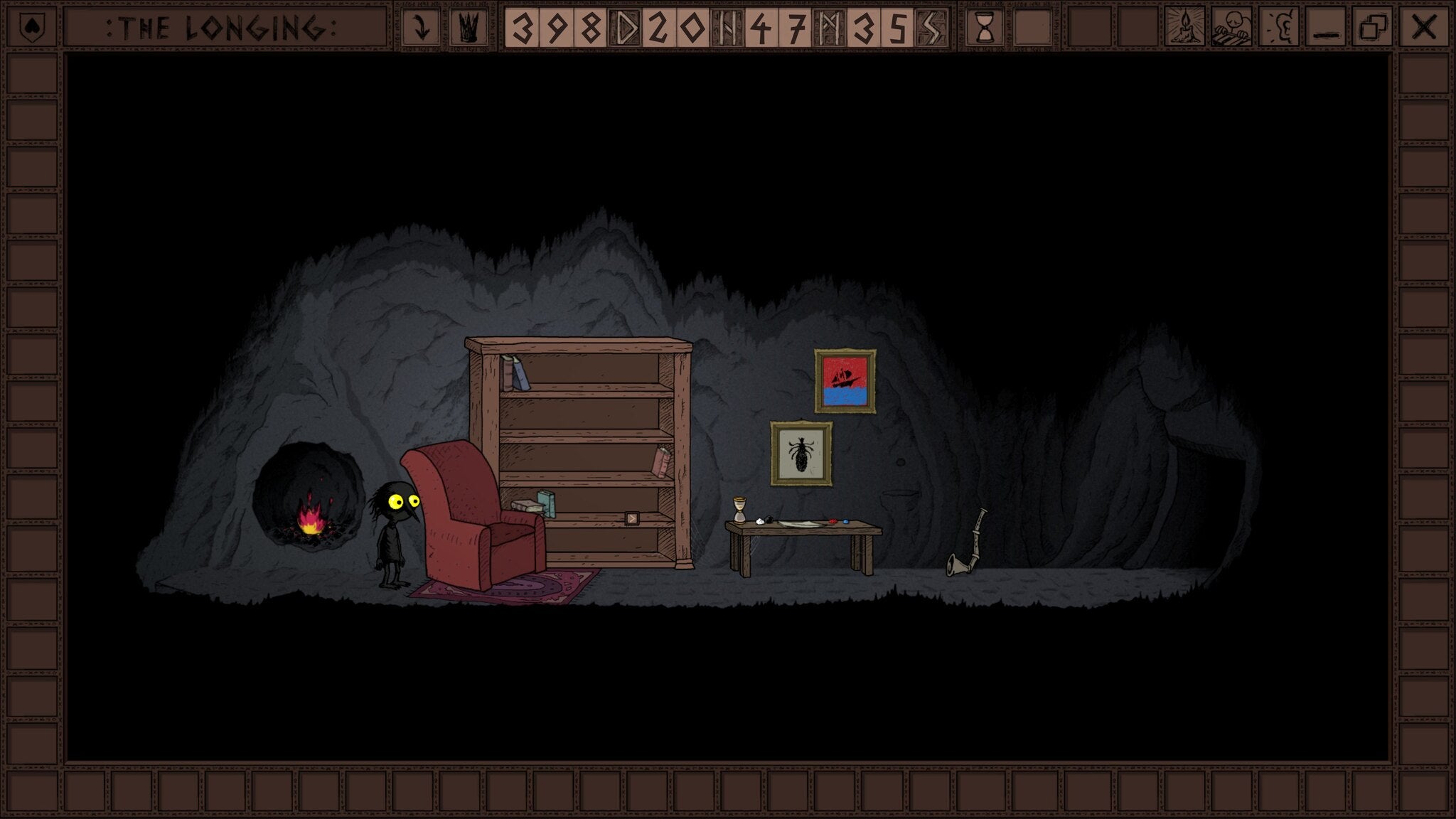 So far, I’ve found this time constraint unexpectedly lovely. The Longing isn’t the first game to make “waiting” a mechanic, but waiting in many games involves speeding along an in-game timer rather than actually staring at your computer. Literally sitting and waiting has called my attention to how it feels to wait, to the emotions that arise from being at the mercy of time. We’ve all had the experience of wishing time would go faster—being eager for an anticipated thing to happen, or wishing a current phase of our lives would hurry up and end.

I feel impatient that I can’t see The Longing through now, even while I’m also excited about it. Will I even care about it in a year? What’s going to happen in my life in that time? But there’s not much to be done about these feelings besides just to recognise them, watching my little character stare into space as we both wait for the moss to grow.

I want to know what’s out there in The Longing’s caves, and I want to see an ending of the game, but I also feel committed to following the king’s orders. I love the idea of the Shade’s devotion; I want it to be the kind of being that would actually wait, even if I’m pretty sure my own curiosity will ruin that plan. For a game I don’t really have to play much, I can’t help popping in and out of The Longing, seeing if anything has changed and weirdly not being disappointed when it hasn’t.

It’s a sad game, with its gloomy music and the Shade’s moody dialogue, where it dreams of its own death and wonders if it will ever see the sun. But it’s also peaceful—there’s nothing to do, so you might as well embrace it.