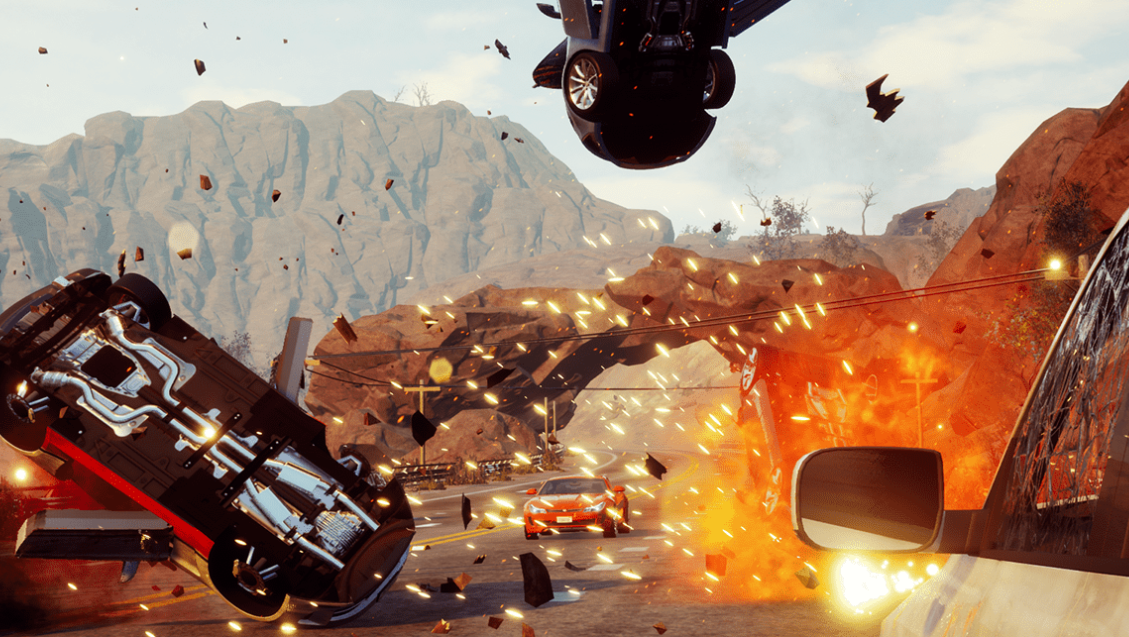 The first <em>Dangerous Driving</em> game came out less than a year ago. (Image: Three Fields Entertainment)

Dangerous Driving 2 is the fourth arcade racing game that veteran developer Alex Ward has worked on in as many years. He and just over half of Three Fields Entertainment’s seven-person staff flew out from the UK to show it off at PAX East ahead of its holiday 2020 release on Xbox One, PS4, PC, and Switch. The demo of the game is roughly a minute long and doesn’t give any sense of the open world punctuated by multi-car pile ups Three Fields is trying to build. So, I asked him, why bring it?

Two decades ago, Ward was directing Criterion Games’ first Burnout, the beginning in a long series of arcade racers that eschewed the sort of minutia car culture enthusiasts love to nerd out over, instead focusing on giving players the thrill of swerving through traffic on populated highways where crashes could be elevated from frustrating or scary missteps to a form of high art. A few years later Criterion was bought by Electronic Arts, and in 2009 the publisher announced the studio had been put to work on its longrunning Need For Speed series.

By 2014 Ward was out, going on to form Three Fields with former Criterion Games colleagues Fiona Sperry and Paul Ross. The studio’s first game was a chaotic physics simulator called Dangerous Golf. Ever since then, Three Fields has been hard at work on churning out spiritual successors to Burnout, first with Danger Zone, a love letter to Burnout’s crash mode, and now Dangerous Driving, the latest of which is intended to be an open world game more in the vein of Burnout: Paradise. 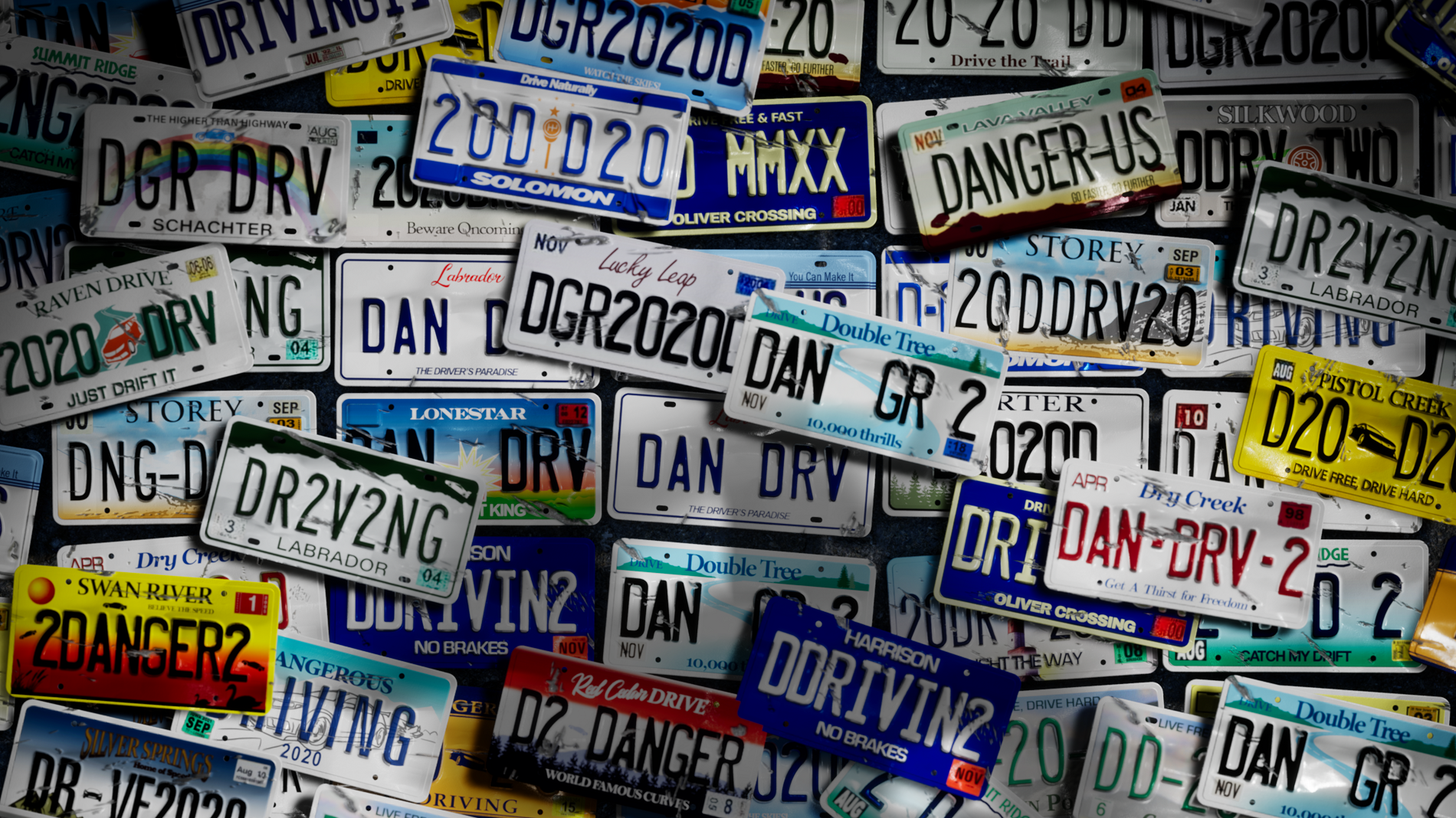 I made a concerted effort to enjoy Ubisoft’s 2018 take on this formula, The Crew 2, and found it disappointing at every turn, so I asked Ward what he thinks is holding other games in the genre back. “That would be telling, wouldn’t it,” Ward says. He then quotes Star Wars: “As Han Solo says ‘That’s the real trick.’”

It’s clearly difficult to get Ward to talk about what sets Dangerous Driving 2 apart, but once I play the demo, I can see a hint of what the answer to that question might be. I’m far from the game’s target audience, but sitting down to play it at one of PAX East’s smallest booths, situated amidst the thousands of people roaming the show floor and the hundreds of other developers and companies doing their best carnival barking routine, it immediately wins me over. I take the virtual wheel of what looks like an off-brand cross between a Ford Mustang and a Dodge Charger and start gunning it down a straightaway. The car feels good, heavy and powerful as it hovers right and left following each tug of the thumbstick.

“I’ve got friends working on big major games,” Ward says. “There’s 9,500 people on the team. How connected are they, what say have they got when they go ‘I think the handling sucks,’ ‘I think the fourth hour is boring’?”

Moments later my first sharp turn comes up and I slam into the guardrail. My car begins to roll and the camera slows down to loiter on each spark, cloud of dust, and plume of smoke the collision kicks up. It’s fun. But, moments later, the demo is over. After it ends, it repeats itself half a dozen more times. Glancing past oncoming traffic at 70 miles an hour is satisfying enough on its own, but the demo didn’t help me understand why Three Fields is making another Dangerous Driving just a year after the last one came out, or why it’s come to PAX East to show off such an early build.

#PAXEast2020 Day 2 complete and our zero waste stand had evolved even more. Lots more live sketching today, talking to great folks about #DangerousDriving2 and sign them up to our @3FieldsEnt mailing list pic.twitter.com/7QHUCeTkLQ

Ward is ready with an arsenal of metaphors to describe Three Fields’ tiny team. During development, he explains, they can be a band that likes to jam together. Developer Phil Maguire then tells me about a time Ward was able to create an entire area in the game over a weekend thanks to new tools that help automatically generate large sections of open road. When things need to be changed, they’re a nimble group of special forces. Maguire is proud of the team’s post-launch support for the first Dangerous Driving which added online modes and bug fixes up through last September. And here at PAX East Ward calls the studio “A high school football team at the Super Bowl.”

Where a group of kids might bask in the limelight of one of the biggest sporting events of the year, Ward looks like he’s ready to go home. “Exhausting,” he says when I ask how the show has been. Also expensive. He points to the large flatscreen TV Dangerous Driving 2 is playing on, the table it’s sitting on, and even the dingy black carpet beneath our feet—all things Three Fields has to shell out money to rent and then break down before they fly back across the Atlantic. The booth doesn’t even have an eye-catching banner. Instead, artist Simon Phipps has drawn car mockups with big, bold markers on scraps of cardboard and pinned them up on the curtain separating them from the next row of booths. Showing up to a big conference with an open world game whose demo has no open world just to boost its name recognition might seem cynical, but it also might be all Three Fields can do to stay independent and not go back to working under the large, anonymous corporate umbrella of one of the major publishers.

“I’ve got friends working on big major games,” Ward says. “There’s 9,500 people on the team. How connected are they, what say have they got when they go ‘I think the handling sucks,’ ‘I think the fourth hour is boring’?” How can you make a change? The reality is they don’t. That’s why we’re in a small team. Cause we’ve been there, we’ve been on big teams. It should be getting easier not harder but you’re on a big team, there’s a lot of places to hide.”

Ward has spoken publicly in the past about the lack of support he felt Criterion got from EA for Burnout: Paradise. “Nobody else wanted to make an open world game,” he told Gamasutra in a 2018 interview, saying that Burnout never got the same level of support from EA that Need For Speed did. The irony of course is that now Three Fields is trying to make an open world driving game with dramatically less resources.

In the end, Ward did manage to come up with something to say about his competitors. “What do I think is lacking?” Ward says. “Passion. Passion is what I think’s lacking.”