There’s A Superb New Room Game, If You’ve Got VR

Let’s call The Room series the Half-Life of puzzle games about locked boxes. It’s the best in its category, and its creators just released a sequel that’s only playable in virtual reality.

The Room VR: A Dark Matter, the fifth game in The Room franchise, was released for PC and PlayStation virtual reality platforms last Thursday, three days after the long-awaited return of Half-Life in the form of the VR-only Half-Life: Alyx.

Both games are forcing fans to decide if they want to keep up by diving into VR. A Dark Matter is a good new entry to the series, but, as with all VR games, the need to have a headset and special controllers makes the cost of entry high. At least, unlike the new Half-Life, there’s a relatively lower-budget but perfectly playable PSVR version alongside the high-end versions for Oculus and Steam VR.

The Room series isn’t for people who want to be space marines, magical warriors or gun-wielding residents of a sci-fi city. They’re games for people who’ve fantasized about opening a hidden door by removing the correct book from a bookshelf.

From game to game, each entry of the nearly decade-old series plays out as a batch of interrelated puzzles that largely involve figuring out how to manipulate locked objects by turning hidden dials, inputting codes, and inserting keys discovered in other puzzle boxes. The excellent fourth Room game, early 2018’s The Room: Old Sins, was all about unlocking an intricate dollhouse, letting players magically shrink and solve puzzles from room to room while occasionally backing out and solving puzzles involving the totality of the house as well.

Putting the puzzle series in virtual reality gives the player a powerful sense of being inside the game’s puzzle-filled rooms. (Gif: Kotaku, Fireproof Games)

All of the games have been presented without a character in view, clearing the player’s view of any obstructions as they tried to solve a room’s puzzles. The new VR entry immerses players more fully, as if they’re a person walking through these rooms, using their virtual hands (as controlled by VR controllers) to handle objects. A Dark Matter puts the player in several puzzle-filled spaces, including an office, a room full of ancient Egyptian artifacts (these would preferably have just been shipped back to Egypt) and a gothic church. Players find the expected, ornate puzzle boxes, but they also find doors with intricate locks, statues that are mysteriously missing key features, and even an ingenious virtual device that seemingly prints different keys based on the phases of the moon.

The puzzles aren’t that different than what’s been in the earlier games, though the VR and hand-based controllers make them feel a little more real. The Room games first launched for tablets, and on that platform they’ve always been effectively tactile. You would drag your finger on a screen to open the panel of a puzzle box, or draw a circle to turn a key. VR helps further that sensory illusion as the game invites you to reach with your virtual hands to pull levers, tug ropes and activate a crystal ball, among other things.

VR also improves the series’ sense of scale. The puzzle boxes in the game are as big as real boxes. Locked doors are taller than the player. When the game lets you shrink down to manipulate a lock inside a keyhole, it really does feel like what was small is now massive. 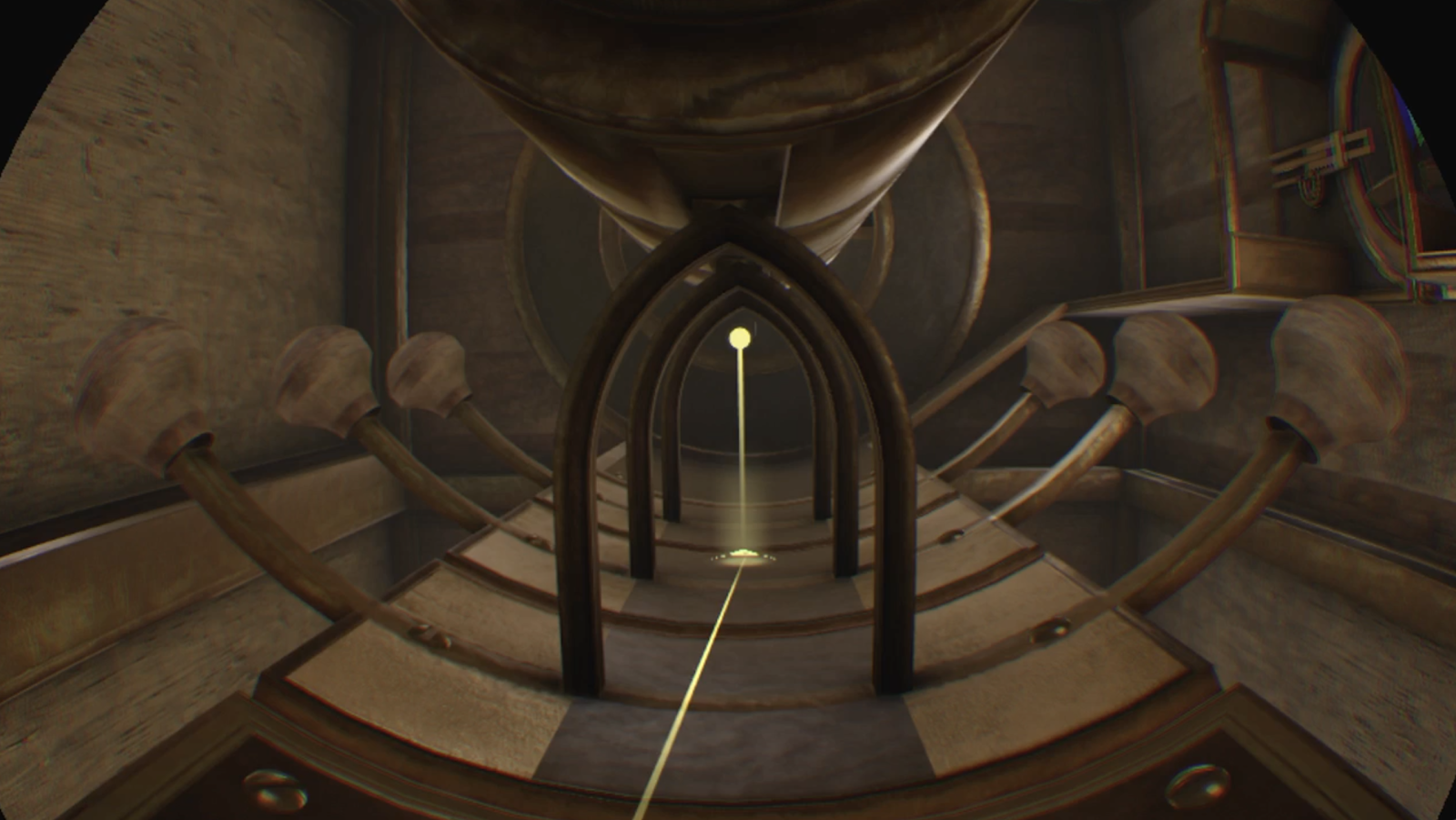 Inside the box after magically shrinking (Screenshot: Kotaku, Fireproof Games)

Room games go by quickly, especially if you’re played one before and know the basic rhythm of the puzzles. The developers at Fireproof Games make beautiful puzzles, but not very difficult ones. There are rarely many variables to consider, and careful observation of one’s surroundings or even the use of an elegant, timed hint system make progression pleasantly possible.

User reviews have nevertheless knocked A Dark Matter for just one thing: its brevity compared to its price. This is a dubious formulation to judge a game, but the stats for this one are stark. Earlier Room games launched on tablets for about $US5 ($8) and could last several hours. A Dark Matter is $US30 ($49) (plus the cost of a VR headset if you don’t have one) and reviewers say they’re clearing it in about three hours, which matches what we experienced, too. It’s possible to play it slowly, to savour each puzzle-filled room and break the game up across several sessions. That’s mostly a matter of will.

Had The Room games not originated on tablets, their turn as a VR experience might feel more revolutionary. They were always about puzzles that you could all but reach out and touch. VR suits that well, neither notably improving the franchise nor marring it. A Dark Matter is a very good sequel and one of the better VR games you can play. The Room, after all, remains excellent no matter the format.