One-Punch Man: A Hero Nobody Knows is not a video game about uber-powerful anime sensation One-Punch Man. It’s the story of a player-created character operating in One-Punch Man’s orbit. The single-player story mode battles last much longer that way.

In One-Punch Man: A Hero Nobody Knows’ three-on-three competitive fighting mode, Saitama (AKA One-Punch Man) takes 100 seconds to show up to a battle and can only be defeated by another Saitama, a quirky way to translate his immense power into a traditional arena fighter. The game’s story mode, on the other hand, features a hero nobody knows.

In my case, that’s this guy: 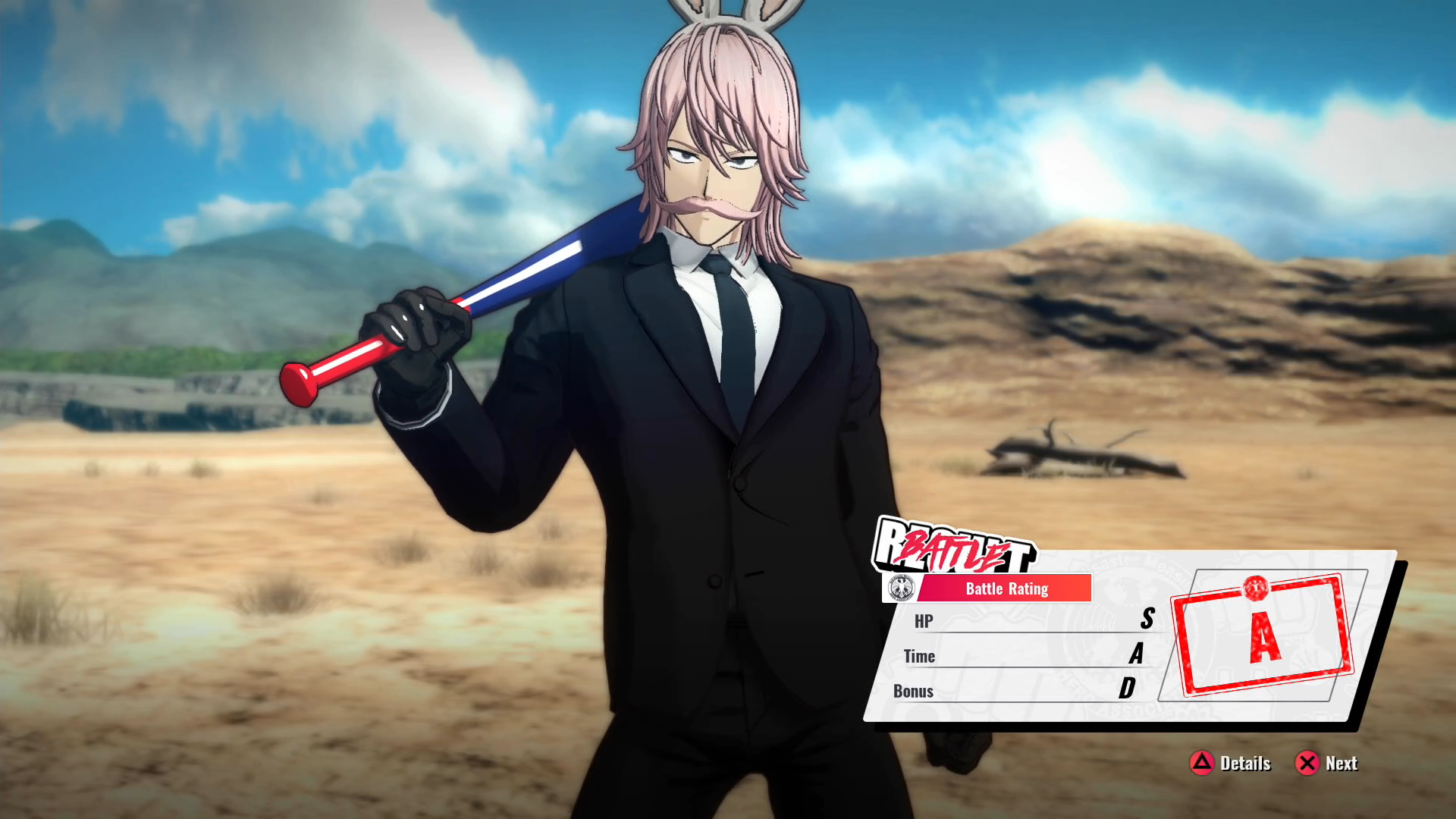 He’s got pink hair, a pink mustache, and bunny ears. He’s used several fighting forms, unlocked as he’s befriended characters from the manga and anime series while rising through the ranks of the world’s hero population. Right now he’s fond of using a bat, though he might develop psychic powers soon.

I’ve not settled on a name. The game calls him “Pessimist”, a name earned by playing through story mode. The goal of story mode is to train a fledgling hero from the lowest rank to the highest. I guess I just feel as if he hasn’t made a name for himself yet, despite spending hours rising from new recruit to Class B hero, inching closer to Class A with every monster beaten. 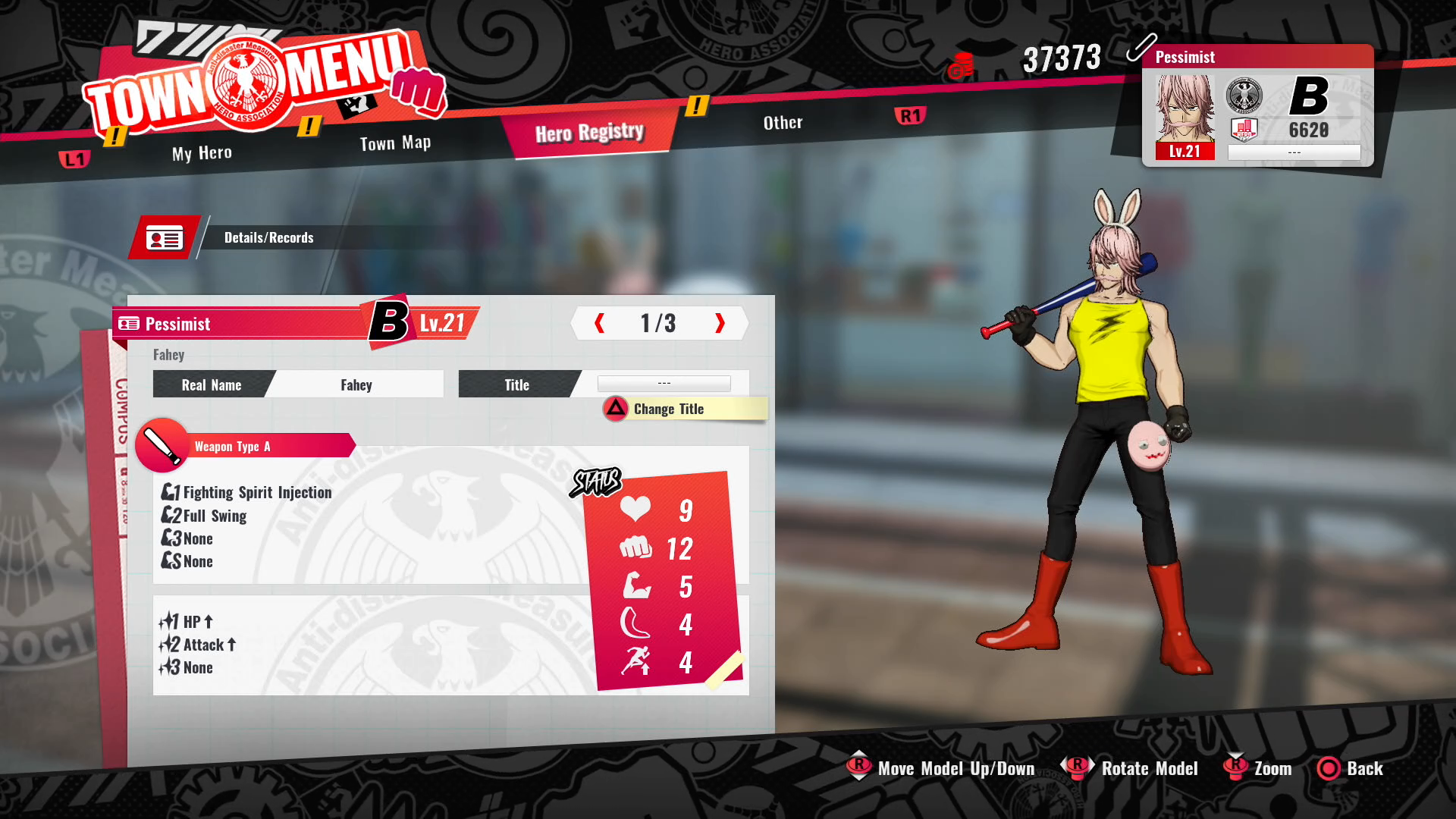 Instead of ending fights with a single blow before wandering off to go shopping like One-Punch Man, my pink-haired hero fights justice on the streets alongside countless other up-and-coming heroes (at least in online mode). He does fetch missions for people on the street. He defeats thugs with the gall to assualt him as he wanders back alleys. He buys furniture to decorate his room and clothes to decorate his body. 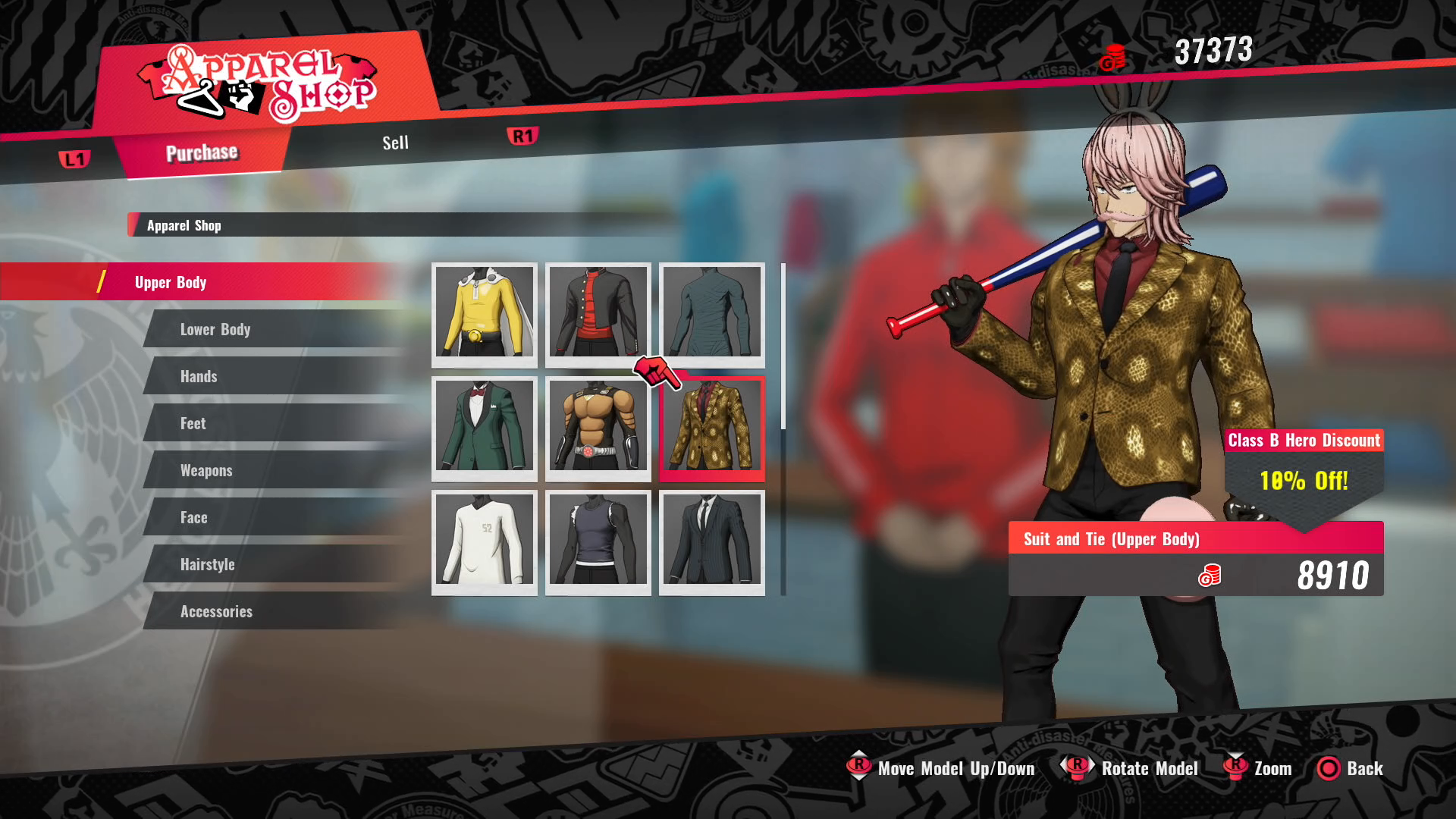 Oh, and he punches people. Multiple times. Often with a bat. He punches things with his bat. 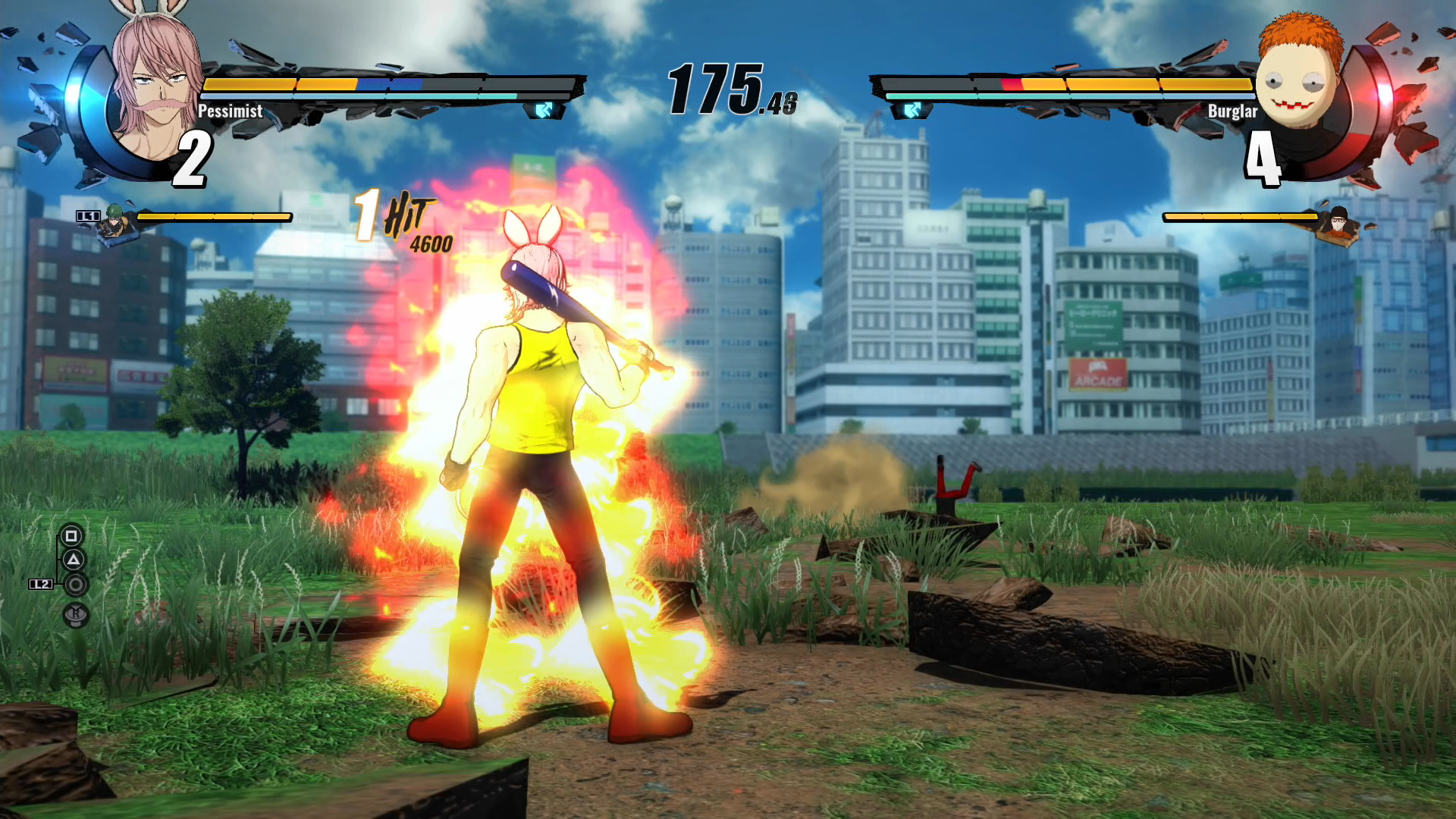 What he does not do is spend a lot of time with One-Punch Man. Saitama shows up briefly during story beats. My character will be struggling against a powerful foe, one he can only hope to survive against by blocking and dodging until help arrives. One-Punch Man will show up, I’ll press a button, and the problem is solved. It’s hilarious every time it happens. 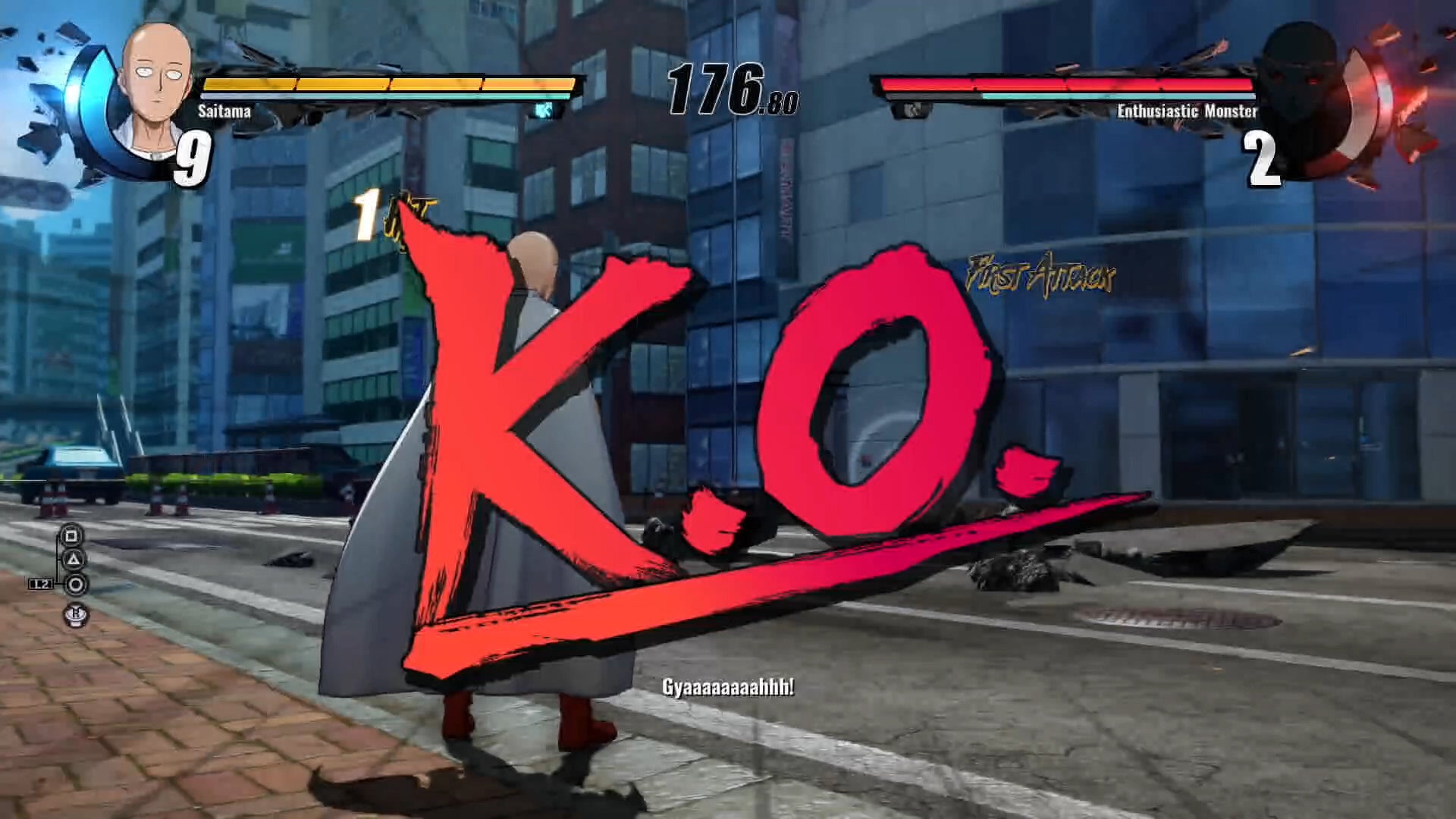 It doesn’t happen often. Most of the time my hero is on his own or joined in battle by computer-generated characters with more modest power levels. He can have a little Saitama now and then, as a treat, and it always is.