This Weapon Is Not Your Life

Thanks to The Force Awakens, we know that after The Empire Strikes Back, the Skywalker family lightsaber made its way from the bowels of Cloud City into the collection of Maz Kanata. We still don’t know the details of that journey”for all its pre-release bluster, Marvel’s new Star Wars ongoing series has yet to reveal them. But it has told us why Luke would leave it behind.

Set in the immediate moments after the events of The Empire Strikes Back (just like the new Cloud City.

They all have their reasons to do so. Leia wants to learn more about the carbon freezing process that took Han from her, so that she can one day free him from its icy clutches. Lando wants to not just see the state of his people under Imperial rule, but liberate his old friend Lobot from the Empire’s cruel clutches. Luke, meanwhile, wants something a little simpler: He just wants his lightsaber back.

The past few issues of the arc have seen them all hit snags on their missions. Leia accidentally got caught and carbon frozen, destined to be hauled away to Imperial interrogation. Attempting to free Lobot from the cruel, computerised prison the Empire has hooked him up to in Cloud City’s heart, Lando has found himself surrounded by Stormtroopers. Luke? 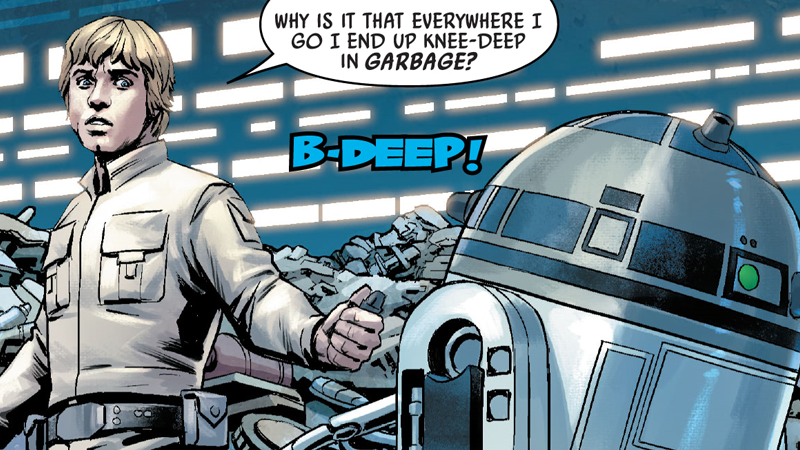 There’s a grim humour to our intrepid hero filing through trash and talking to incredibly disinterested ugnauts about one metal cylinder in a metal-cylinder-laden haystack as everything around him goes very wrong. But it’s also an indicator that this journey will not end with Luke merrily carrying his lightsaber out of a pile of trash and going on his way. We knew that wouldn’t be the case, anyway”after all, it’s gotta find some way into Maz’s hands. But really, the logistics of all that has never really mattered (unless you demand that all simple acts of Star Wars‘ vast tapestry must have grandiose, prophetical meaning to them in order to appeal to the sacred rites of canonicity, but that’s an argument for another day). It’s why Luke would leave his weapon behind in the first place that does.

Star Wars #4, out today, reveals that reason, and it’s about so much more than the fact that it’s indeed incredibly difficult to pick a lightsaber out among a sea of scrap metal. As a frustrated Luke realises the odds are against him, he attempts a drastic move: After trying to shut himself off from the Force in the wake of his father’s revelations, he reached out, attempting to seek out the weapon that, in his eyes, is what defines him as a Jedi, even after learning his heritage as the child of a Sith Lord. 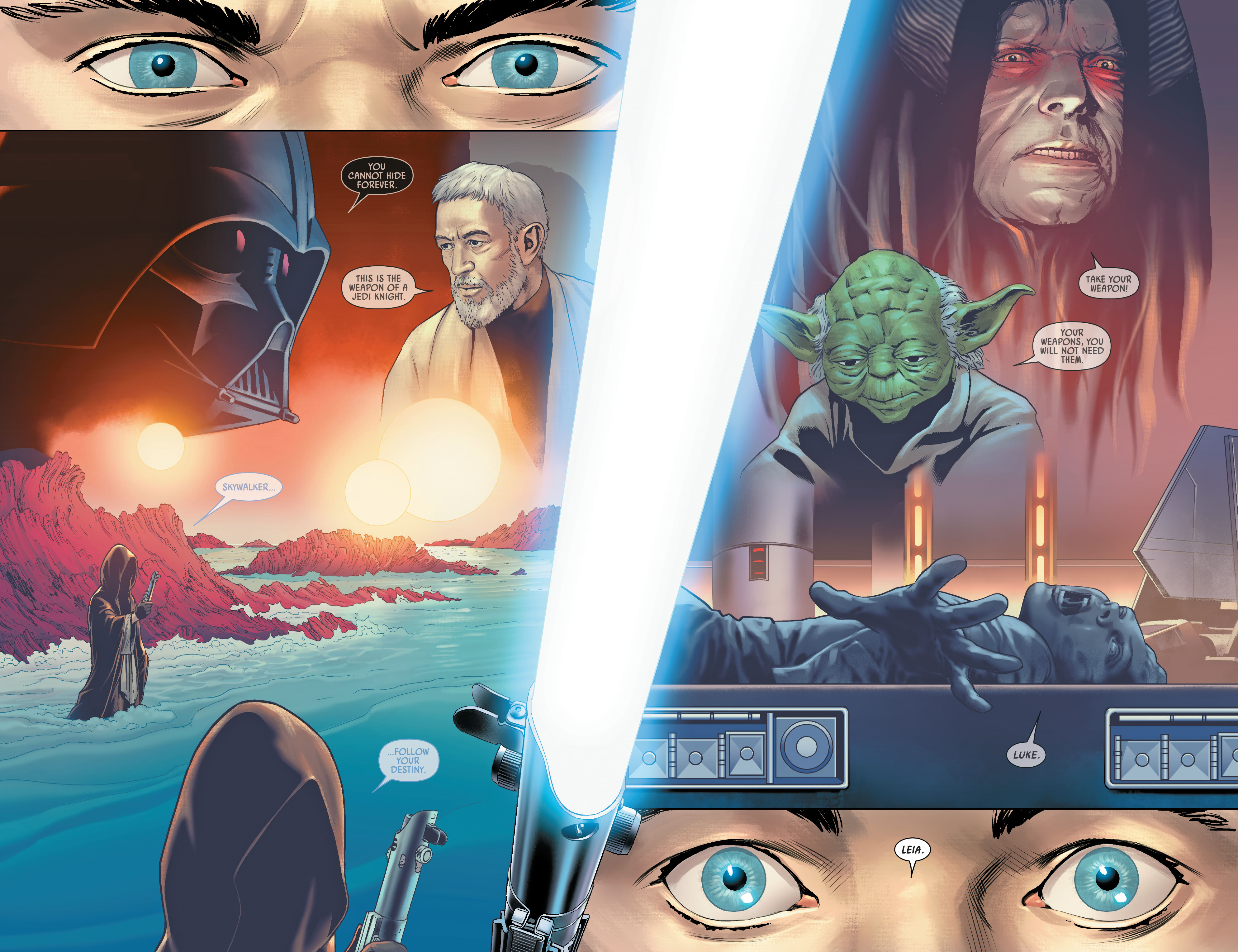 He doesn’t get the answer. Instead, he gets a vision”one that is threefold in its own revelations. The primary is that, through his bond with Leia, he discovers she’s in immediate danger. The other is a much more mysterious thread for him to pick up on, as an unknown figure, Luke’s saber in hand, beckons the wayward Jedi to face his destiny. But the third is the most important of all: The Force gives Luke a window into time itself.Â From the past, Yoda reminds his student that he will not need his weapon inside Dagobah’s cave of evil, a lesson Luke ignored. And from the future, the Emperor teases him to take up arms, a jab we know is from Luke’s impending rematch with his father aboard the second Death Star.

It is a glimpse of what a lightsaber actually represents to a Jedi, a vision that reminds Luke that his study of the Force has always been about far more than how to swing a laser sword. A realisation he makes clear when he reunites with Lando to liberate Leia from her carbonite prison, a lesson we know he will indeed have truly embraced when, aboard the Death Star II, he chooses to throw his blade away when given the chance to strike Darth Vader down once and for all. It’s in this moment that Luke realises his lightsaber”his weapon, his father’s weapon, as Obi-Wan told him”or his lineage beyond it isn’t what makes him a Jedi. It is his own actions, his choices, his ability to reach out and connect to the Force, and use that power to help others, that will define him as a Jedi Knight more than a lightsaber ever could. 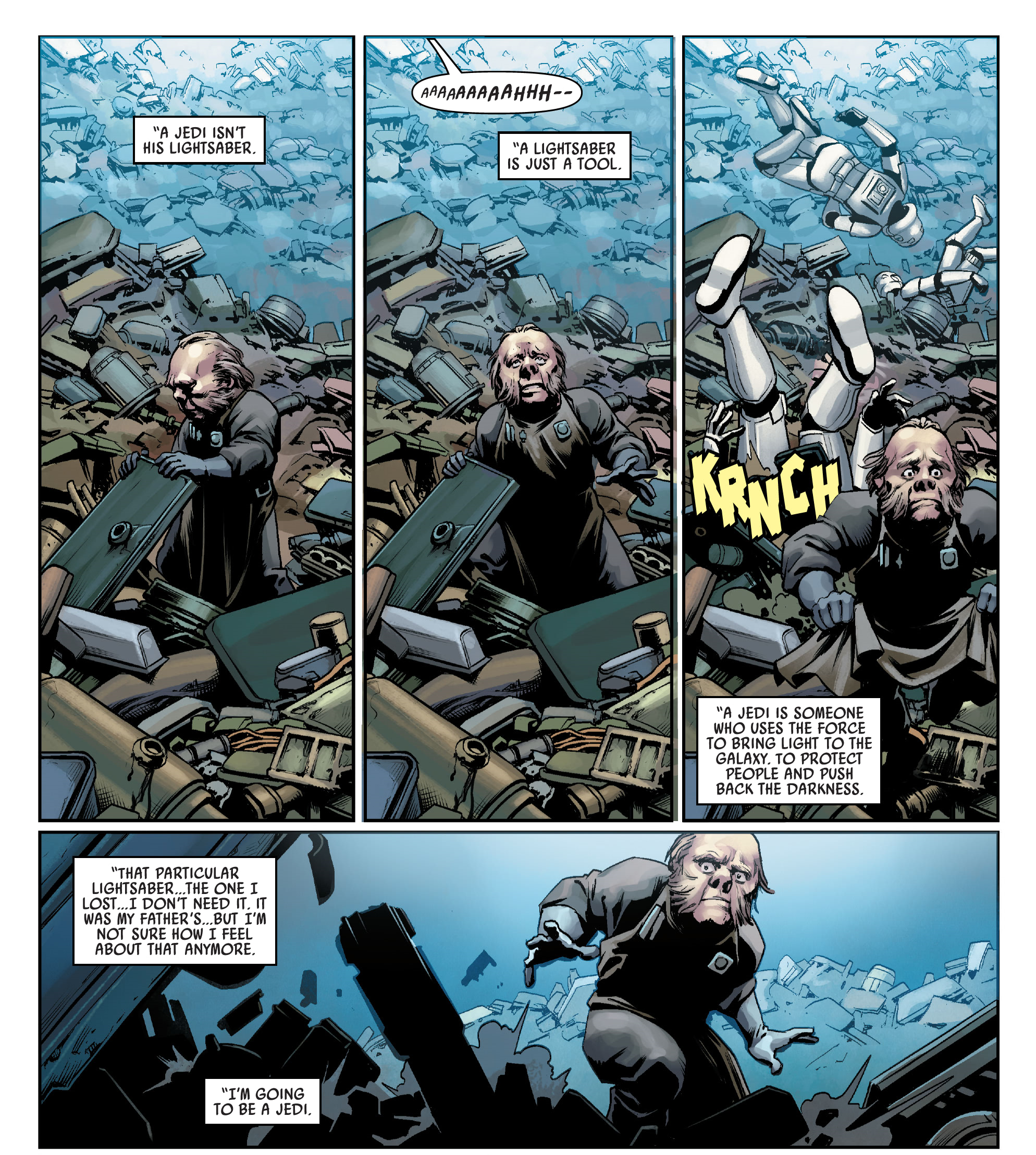 That this realisation is played over a scene of one of those ugnauts actually finding Luke’s lightsaber is another bit of grim humour”there’s clearly still more of its journey left to tell. But does it really matter, in the face of Luke’s lesson?

He now understands that it’s not the weapon that makes the Jedi Knight. Maybe we, like Luke himself, should let it go too.