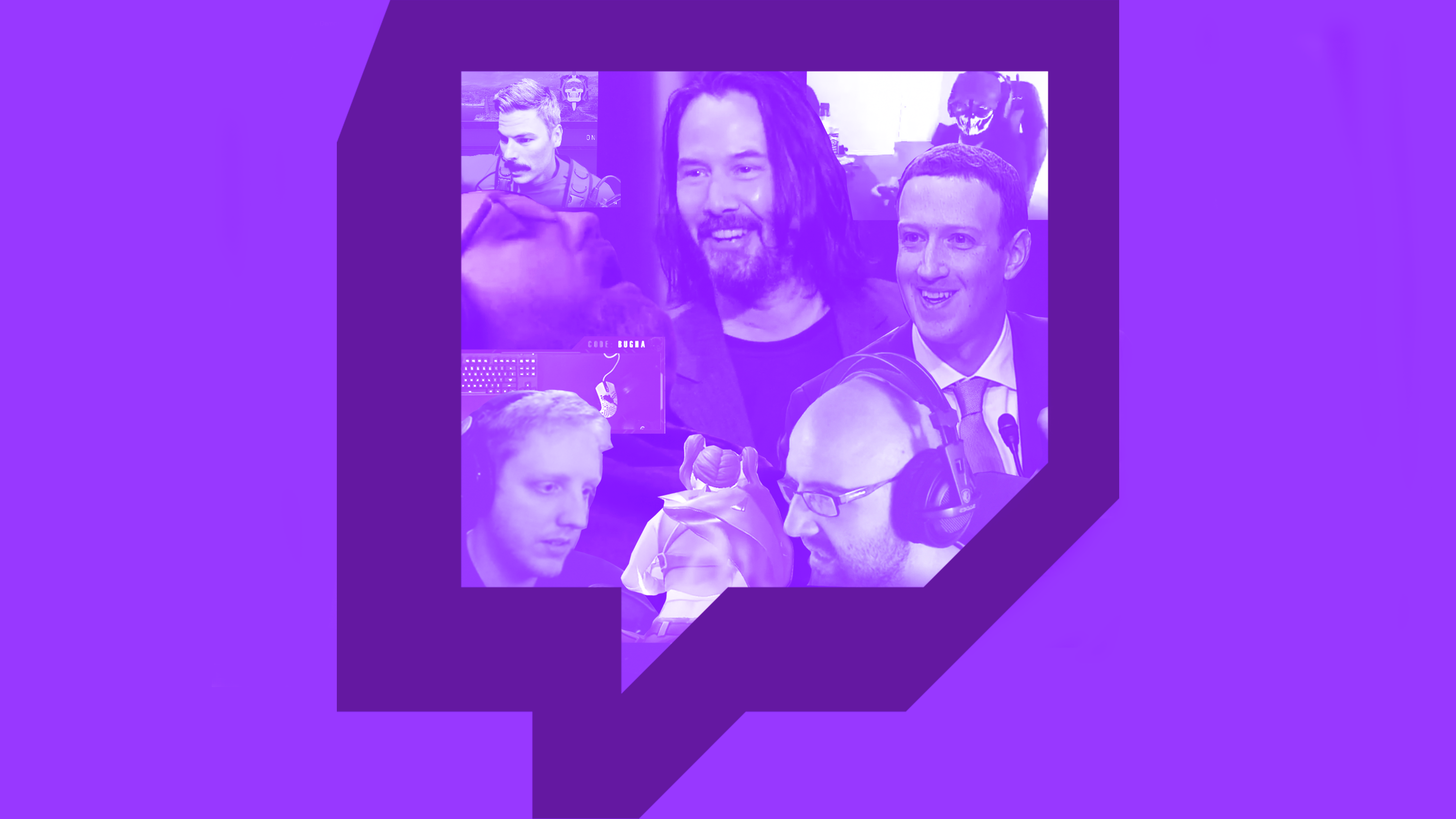 Twitch clips are one of the streaming platform’s best features, allowing any viewer to quickly save a section of a stream and share it elsewhere. The system is engineered to help them go viral. A simple interface makes it easy to cut only the best bit, with a maximum length of 60 seconds. The clips tend to autoplay by default, to better catch the eye of a passing viewer.

While Twitch doesn’t maintain its own list of the top-viewed clips across all channels, view counts of Twitch clips are public, allowing third-party aggregators like Twitch Strike to collect them into such lists. Looking at this list, we can see that the top 15 videos of all time, each of which has over 1.5 million views, show that a clip’s viral potential has very little to do with the game being played on stream—if one’s even being played at all. Instead, it’s all about the people.

Unsurprisingly, many of the top 15 clips feature big name streamers—if not flat out celebrities. Keanu Reeves’ improvised “You’re breathtaking!” moment at last year’s E3 is the fifth most-viewed clip of all time. Recognizability gives these clips the initial momentum they need to spread, but the streamers’ fame is also often what led to the very situations that makes the clips interesting—and often not for positive reasons.

Three of these highly-viewed clips involve a streamer’s safety being threatened. With 3.6 million views, “DOCS house gets shot at” depicts the moment that Guy “Dr Disrespect” Beahm angrily states that someone has just fired a BB through his window for the second time in as many days.

A similar pair of clips relate to the swatting of 16-year-old Fortnite pro Kyle “Bugha” Giersdorf last August. The first shows Bugha leave his PC at the crux of an intense Fortnite match, leaving his friends to speculate incredulously that he had abandoned them. The second clip shows Giersdorf’s explanation for vanishing: “Yeah, I got swatted,” he says. “They come in with guns, bro. They literally pulled up, holy shit. That’s scary.”

Because these newsworthy moments were caught on stream, they were spread on social media and online publications, putting them in front of millions of people. But they also fit into a broader tendency: Widely-shared clips usually aren’t capturing a great moment for those involved.

While none of the others in the top 15 involve direct threats to streamers, they are often uncomfortable or embarrassing: Tyler “Ninja” Blevins awkwardly flossing in front of a stationary crowd during a Twitch stream live from Times Square on New Year’s Eve, for example, or Outlast 2 streamer JurassicJunkieLive getting jump-scared by his baby daughter.

If games are involved in the clip, the allure of the clip generally has less to do with what’s happening in the game itself, and more about what it means in the context of the life of the streamer playing them. Take permadeath Minecraft runner Philza, whose 1.6 million view clip involves him losing a five-year long run. Ostensibly this is a moment in a game, but it would be insignificant without the commitment that Philza had made over the last five years, his previously existing notoriety, and his reaction.

But most don’t include gameplay at all. Often, the very fact of someone’s embarrassment is enough. Take, for example, billionaire Facebook CEO Mark Zuckerberg, whose skewering by Senator Dick Durbin during his appearance in Congress to answer questions on Facebook’s many privacy issues was broadcast by the Washington Post and has since been viewed over 2 million times. Zuckerberg being caught out in an apparent double standard regarding privacy is so cathartic that it’s no wonder so many wanted to see it.

But the targets of these kinds of viral clips aren’t always so reasonable. The only one of the top 15 that shows a woman on screen features LivStix, an IRL streamer. During a stream inside a beachfront bar, an older man with a grey beard sticks his face into her camera’s view, leans in close to her, and says “You’re really not that interesting” as another person laughs offscreen.

“I’m wearing a bikini being told, ‘you’re really not that interesting,’ by a boomer which is almost by definition a recipe to get yourself a healthy dosing of hate,” LivStix told Kotaku in an email.

In the two years since it was uploaded, the clip has had 1.7 million views. Many of these come from having been shared by communities like Livestream Fails, a website and associated subreddit that hosts clips of “livestream wins, fails and fuck-ups of Twitch Streamers, YouTube Streamers and any other livestreaming platform there is.” It’s been given titles like “Old man puts loud obnoxious girl in her place” and “Old Man roast eGirl LUL.”

“Unfortunately, hating on women is a very popular thing to do on Twitch, especially being an IRL female streamer,” LivStix said. “I still have people quoting this clip multiple times a day on a span of multiple different social media platforms.”

“Negativity will always gain more traction than positivity because people love ‘tea,’” she said. But ultimately, LivStix doesn’t mind when the clip is shared around, because her stream has only gained popularity since it blew up. “All I’ve had to do is sit around and be called ‘not that interesting’ day in and day out by people who were indeed interested enough to take time to insult me, and a large portion of them later support me.”

There’s an unmistakable pattern of negativity running through almost all of Twitch’s most-watched clips. And yet, with 3.6 million views, the most-seen Twitch clip ever is a simple one. A sleeping man wakes up, looks over at his camera and screen setup, and as he realises what’s happening, slowly begins to smile and laugh.

That’s Jesse D, a variety streamer who’s been on Twitch for about two years. The clip, he said in an email, is not that unusual for his broadcast. “I often stream myself watching TV after work,” he said. “I’ve started to throw some games in there, but a vast majority of my content has been me streaming from that point of view.”

On the day of the clip in question, “a long day of driving and running errands” had caused Jesse D to fall asleep. His stream usually only reaches a few viewers, but as he napped that night, someone who saw him dozing while live decided to tweet about it. Then some Discord servers found it. Then more tweets. The snowball effect caused some other channels to host him. At its peak, he exceeded 1,500 viewers. “When I woke up [I was at] 215 viewers,” he said. The high turnout, and the fact that he had received a few donations, were what prompted his wholesomely cheerful reaction.

He doesn’t know exactly how it became the most-viewed clip on all of Twitch. “Reddit played a huge part in it,” he said. “It stayed stagnant at number two for a long time but I think what pushed it over to the top spot was when it got featured on Barstool Sports’ TikTok. I ended up seeing a nice increase in traffic on the stream from that as well.”

“Most people found the clip very genuine and wholesome,” he said. With the list focusing so heavily on the people themselves, and most of them during a negative moment, it’s good to know that something so pure can still rise to the surface.