In as extreme a case of eating crow as you’ll see from a big game publisher, Ubisoft said today that they are cancelling Ghost Recon Breakpoint’s planned second raid, reducing its aggravating always-online requirement, and will soon release an update that lets players deactivate its despised loot system. It’s all in service of trying to salvage a game that has had a disastrous first five months.

Ubisoft is highlighting today’s news with a focus on the new Immersive Mode, an optional way of experiencing Breakpoint to which players will be able to switch on the fly. This mode is tantamount to an admission that the most significant change Ubisoft added to the traditionally tactical and stealth-focused franchise with Breakpoint was bad. At launch, players who ventured across Breakpoint’s vast and violent island landscape found that the guns and armour they picked up after defeating enemies all had stats that contributed to an overall gear score number, which needed to be raised so players could take on tougher missions and enemies. This meant players were constantly ditching and replacing their weapons, having to play the game as if it were Diablo or Destiny.

In a nod toward Ghost Recon’s traditional focus on rewarding tactical skill over stat-grinding, players who use Immersive Mode will be able to pick up a weapon and find it viable throughout their time playing the game. In this mode, gear score is gone. Players who use this mode will also be able to customise settings for their character’s stamina and health, clear clutter from the game’s heads-up display, and even determine whether getting shot always causes severe injury.

Immersive Mode is the headliner for Ubisoft’s big Breakpoint overhaul, which is slated for March 24, but it is just one of several dramatic changes that are coming about as Ubisoft rips up its roadmap.

At launch last October, Breakpoint was promoted—as Ubisoft releases are these days—as having a year’s worth of new content that would be added after release, including multiple additional story chapters, some multiplayer raids, and more. Within a couple of weeks, however, it was clear that launch was a disaster. Players were furious about the gear system and, at least online, were vocally opposed to the developers spending time making series-first multiplayer raids instead of making Breakpoint more of a traditional Ghost Recon game.

One raid was added in the fall, but today Ubisoft revealed that the next raid is cancelled. Instead, the game’s developers will work on “deepening” the options for Immersive Mode, a decision made “[b]ased on all the player feedback we’ve received online and in play testing,” a company rep explained in a post.

Breakpoint’s next wave of content had been shown in a Year One roadmap that has already seen numerous slips. An invasion of cinematic Terminators slated for December slipped to January. An extension of the game’s campaign seemingly set for February will now be part of the March 24 update.

Back in October, the game’s developers reacted to a calamitous launch and cacophony of complaints by writing an open letter to players and listing a series of requests that would be worked on. Today, the developers updated that list. 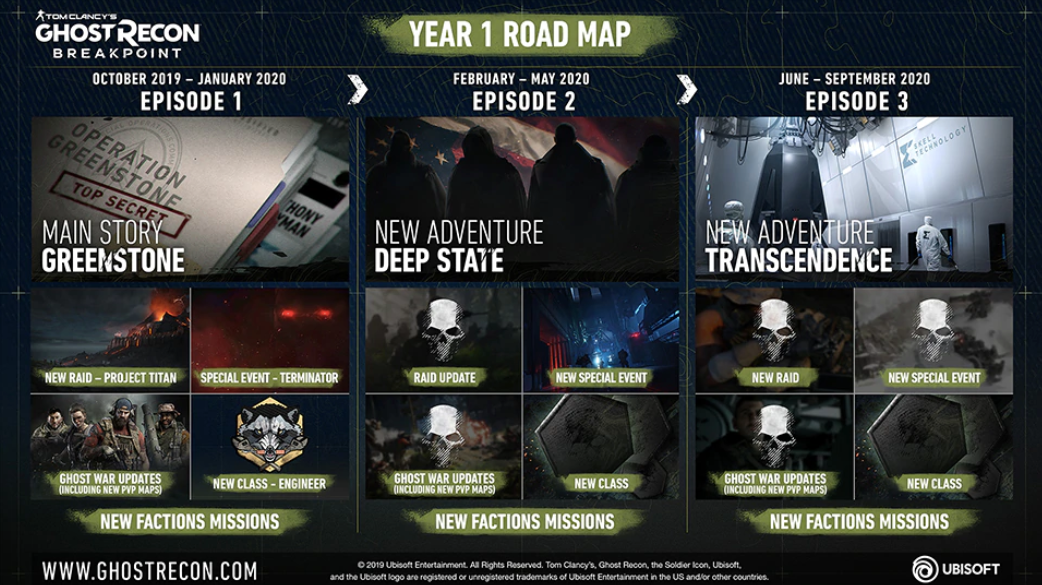 The increasingly out-of-date post-release calendar for Ghost Recon Breakpoint. The game’s engineer class won’t be available until late March, alongside the new Deep State adventure. The new raid has been cancelled. (Image: Ubisoft)

Fans hadn’t liked that the game requires an online connection even when played solo. Today, the developers said that the March 24 update will allow players to continue playing without a sustained internet connection, as long as they’re not trying to access competitive and co-op modes. It’s not going fully offline —a Ubisoft rep confirmed to Kotaku that players will need to have an online connection to start the game—but at least you won’t be booted for a spotty connection.

Back when the game was announced last spring, some fans lamented that Breakpoint wouldn’t give solo players the option to roam the map with computer-controlled allies, which its predecessor Ghost Recon Wildlands had supported. In June, Ubisoft promised it would add that, and in October it said it was still in the works. That’s still coming, the developers said today, but promised more info “in the coming months.”

Ubisoft is also promising improvements to the game’s enemy AI, as well as a host of other changes, for March 24 and beyond.

No change that’s coming might sum up Breakpoint’s situation better than what’s happening to the game’s hub zone of Erewhon. The story of Breakpoint is that the player is more or less the lone survivor of a team of special forces agents who have crashed onto the island of Auroa, where paramilitary forces have overrun a high tech weapons manufacturing company and the society built around it. Near the centre of the island is a mountain inside which is a hidden rebel base called Erewhon. When players went there, they would discover other players milling about, as they would in social hub areas in popular games like Destiny. So much for being the island’s only hope. It violated the game’s narrative and destroyed the sense that players were nearly alone, leading a makeshift rebellion behind enemy lines. But it tracked with the sense that Ubisoft wanted Breakpoint to work like any other big online-connected game, prioritising industry design trends over narrative or franchise consistency.

With the March 24 update, players will be able to lock Erewhon down, so no other players appear there.