Jason Todd’s grim fate is one of the most infamous in superhero comics. Not just for the fact the boy wonder got brained by Batman’s most enduring foe, the Joker, or because he came back from it years later as the Red Hood. But instead, because it was a death mandated by an unprecedented reader poll”and now we have a look at what could’ve happened if it went the other way.

. The penultimate issue of A Death in the Family, written by Jim Starlin and one of the most iconic Batman stories of all time, saw the reveal that”after an intense September’s day of call-ins from fans”readers had decidedÂ Jason Todd would perish at the Joker’s hands. Or, well, really, theirs.

Inspired by the then-recent phone-polling technology, DC’s editorial team wanted to create a chance for readers to directly influence a major storyline in its comics, and with fans divided by the rough-and-ready Jason”a distinctly different take on Robin compared to Dick Grayson”putting him in the sights of the clown prince of crime was an ideal opportunity. After laying out the rules to readers in the back of preceding issues, on September 15 and 16, 1988, readers could call to one of two special 1-900 numbers. One would cast a vote to spare Jason’s life, the other would condemn him to death.

DC’s phone poll for A Death in the Family was infamously down to the wire”his fate was sealed by just 72 votes; 5,343 votes were tallied to kill Jason, 5,271 to save him”so it’s no surprise that there were preparations made for either outcome. While we have indeed seen a glimpse of this before (a small sample of Batman’s ecstatic face was included in Les Daniel’s Batman: The Complete History), this is the first time the full art has ever been made public. 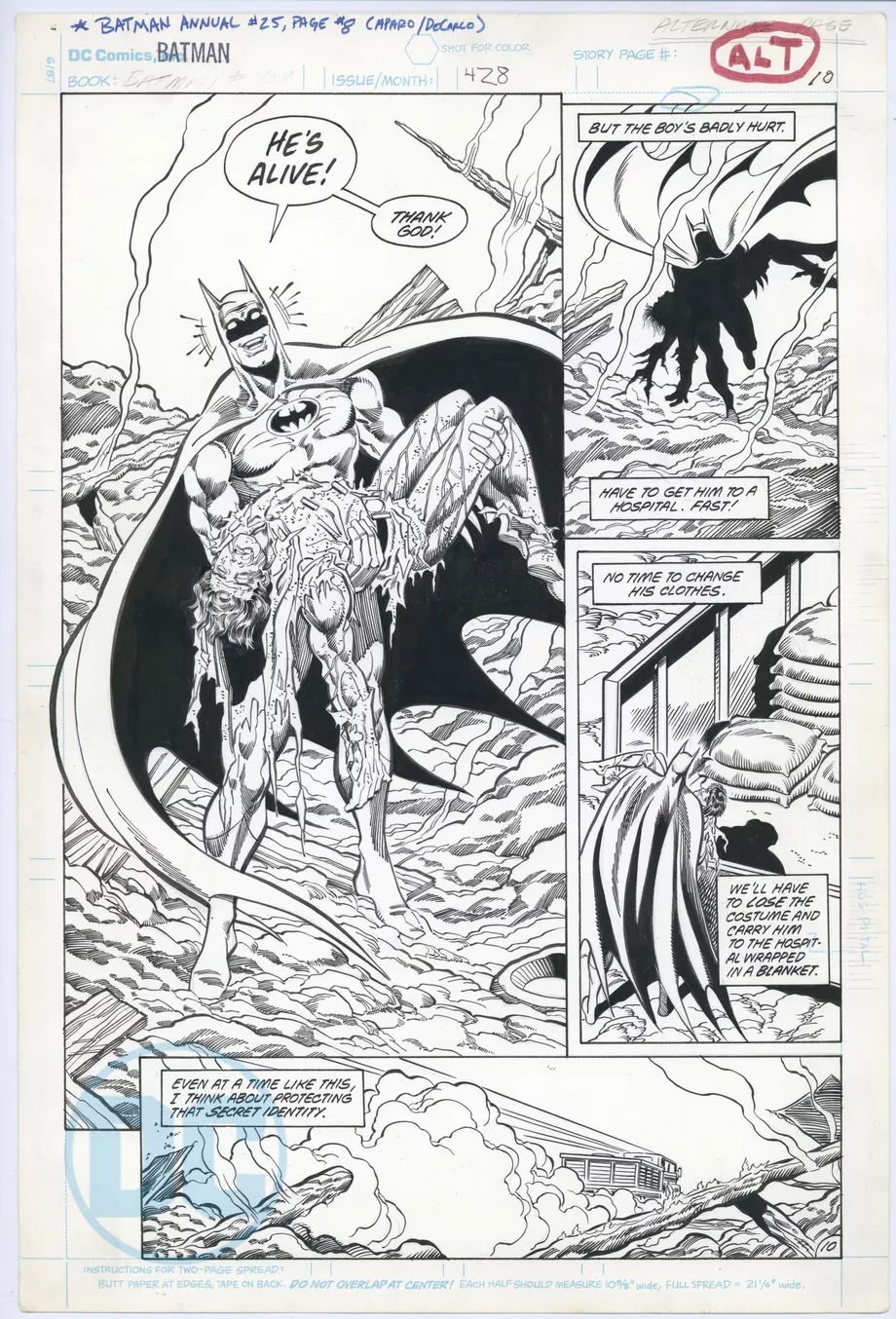 It’s oddly jarring to see. Instead of, as we would get in 1988, the iconic, haunting shot of Batman cradling the limp body of his dead ward”the second character to take on the mantle of Robin after Dick became Nightwing”the Dark Knight is overjoyed to discover that the explosion the Joker left to finish off his brutal assault on Jason didn’t do the job. This alternate iteration of Batman #428 was never fully completed, of course. Polygon’s report makes note of a second page, only partially revealed, of Bruce sitting over Jason’s hopsital bed as he makes his slow recovery back, declaring to himself (much as he would in the final issue, instead at Jason’s funeral) that he’ll never ask for help from someone else in his crusade for justice again, choosing to deal with things alone.

Jason Todd might have come back anyway, but he can never escape A Death in the Family, a story that will forever shape not just him but Batman as a character. This is a fascinating glimpse into a world that could’ve been…if not for 72 phone calls.