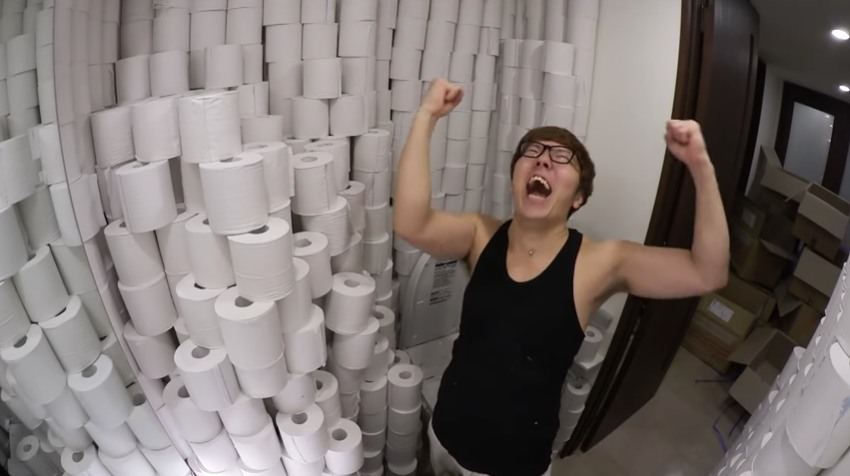 While hoarders have been causing toilet paper sell-outs in Japan, there has been a rumour that popular Japanese YouTuber Hikakin is to blame. The above image is proof of his mass purchase. However, this isn’t a recent screencap. Hikakin bought twenty-years’ worth of toilet paper nearly four years ago.

Below is the original clip, which was uploaded in August 2016:

In the clip, Hikakin said that even though he’s fully stocked for two decades, he would still use toilet paper so sparingly that it would probably last thirty years.

When he moved into a new apartment last year, he brought all the toilet paper:

As reported on Livedoor News, screencaps of Hikakin with massive amounts of toilet paper have helped spur rumours that he had suddenly started hoarding in the wake of the coronavirus outbreak. Images like the top screencap were widely tweeted, prompting people to criticise him for buying all that toilet paper.

“It’s all a misunderstanding” Hikakin recently said, adding that the toilet paper was purchased long before it started selling out. There was no way he could have foreseen these current toilet paper problems, which were originally the result of rumours that caused panic buying.

Relax. Everyone. There is enough to clean all y'all's butts. https://t.co/uUon4sqrXE

Japanese toilet paper companies have plenty of toilet paper in their warehouses and there are no actual shortages. They are doing their best to get shipments out asap.

“I have lots of toilet paper, but I don’t have any masks,” says Hikakin. The mask shorages are real, but right now in Japan, there are folks who don’t have either!