10 Manga Series To Start Reading On The Shonen Jump App, One Of The Best Deals In Digital Comics

Unlimited’s restrictions primarily skew toward its back catalogue rather than current issues.

For free, you get access to the company’s weekly chapter releases of its current ongoing manga series, translated and simultaneously launched in line with their debuts in Japan (which is ideal if you’re already caught up with a bunch of their biggest series). The real deal”especially if you want to start exploring what Jump’s array of action-adventure manga has to offer”is paying for the $1.99 a month subscription, which gets you access to its humongous vault of prior chapters on top of those newer ones. There’s thousands of chapters available across an equally ridiculous amount of series. It’s almost too much.

Whether you’re an anime fan who wants to see the source material for some of your favourite shows, a comics-curious newbie looking to add some variety to your digital pull-list, a diehard reader who wants to try something outside the realm of Western comics, or just someone who would like something really, really, really long to read right now, here are just a few of the series you should try dabbling in.

All You Need Is Kill“You might know All You Need Is Kill from its actual source material, Hiroshi Sakurazaka’s breakthrough sci-fi novel about a man caught in a timeloop that only ends with his death amid the backdrop of an alien invasion of Earth. You probably know it from the Doug Liman film adaptation starring Tom Cruise and Emily Blunt, Edge of Tomorrow/Live Die Repeat, which we’re still actually really hoping gets that sequel…someday. But Sakurazaka’s novel was also adapted in Japan as a manga series by RyÅsuke Takeuchi and Takeshi Obata, so if you’re a sci-fi fan who wants a familiar stepping stone into the world of manga, this is not just on the shorter side of the recommendations on the list, it’s something you might be aware of already, anime fan or otherwise. 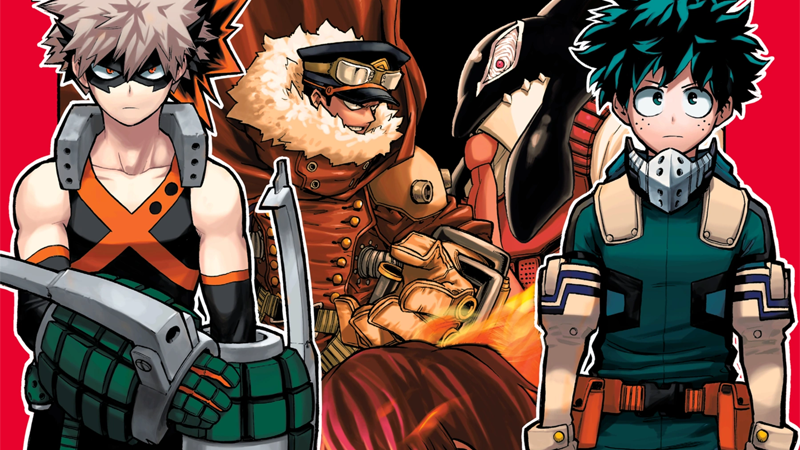 My Hero Academia and My Hero Academia: Vigilantes“It’s one of the biggest anime series in the world right now, coming off the back of its fourth season. It’s also one of the most exciting superhero sagas to come out of comics in recent memory. Kohei Horikoshi’s delightful tale is set in a world forever changed when the vast majority of human beings began developing unique superpower abilities called “Quirks.” It explores the exploits of a generation of new kids at Japan’s top school academy for trainee heroes, with insane action, similarly insane character drama, and a unique, fascinating lens into just what a 21st-century society filled with superheroes is actually like. Plus: When you’re done with the main series, you can dabble in its equally intriguing prequel spinoff!

Food Wars!: Shokugeki no Soma“A lot of the series we’ve recommended here are action-packed battle series (it’s called Shonen Jump for a reason, after all), full of fisticuffs and laser beams and crossed swords. But what if you had a shonen battle series except it was for Top Chef? That’s the beloved Food Wars in a nutshell, which takes the tropes of its fellow action series and translates them hilariously and wildly into the world of competitive cooking. Forewarning though: Its love of food is so passionate, and rendered so sublimely, that it may have you grumbling at your pandemic pantry in hunger.

Literally all the Dragon Ball“I mean, come on. I can’t not recommend one of the most iconic manga series of all time. And, like…all of it? All of it is on here? The original. Z. Super. Versions of it in colour. Hell, that weird spinoff about a normal guy who dies in our world and gets reincarnated as iconic loser Yamcha. If you weren’t already spending five zillion hours watching some Dragon Ball during all this, you could spend arguably just as long, or even longer, reading it instead. 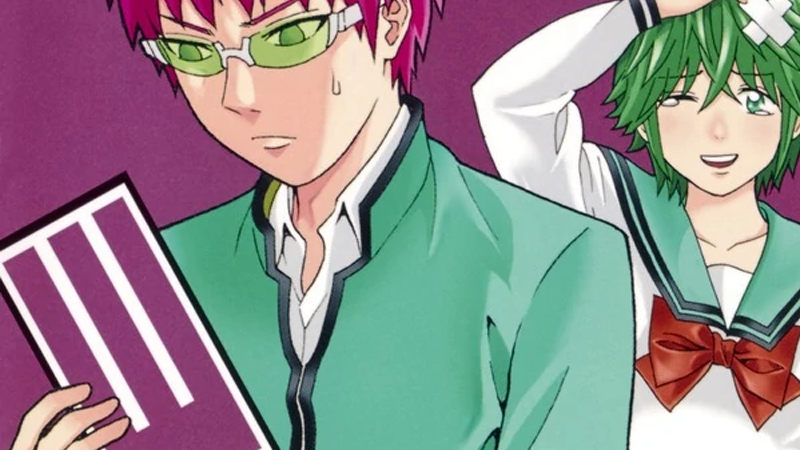 The Disastrous Life of Saiki K.“It’s another series where you might be familiar with the anime rather than the source material itself. This isn’t quite the typical action-oriented genre series, but instead more of a slice of life comedy manga that just so happens to star a protagonist with incredible psychic powers. But the titular Saiki K. (Kusuo Saiki) doesn’t want to use his abilities to dominate the world around him. He just longs for the simpler life of enjoying coffee jellies and being as far away from other people as much as possible. An icon in our current climate!

One Piece“One Piece is several things. It’s a high stakes character drama about a ragtag crew of loveable, zany pirates travelling the world seeking treasure and adventure, like all good pirates do. It’s a sumptuous action extravaganza filled with some truly incredible visuals, thanks to its superhumanly stretchy protagonist Luffy, and the zany, wild pirates he and the crew of Straw Hat Pirates encounter as he seeks to become the king of all pirates.

But here’s the real reason why One Piece is on here: This shit’s over 900 chapters long. It’s been going for decades, it’s still going, and no matter how many times author Eiichiro Oda says it’s nearing its end, it feels like One Piece will outlast us all. It is one of the most beloved, and read, comic book series of all time. And if you want something to dive into”dive deep into”you have a chance to do so here.

Haikyuu!!“Flippantly, you could probably trade what I said earlier about Food Wars here and just remove the mentions of cooking and replace it with “volleyball.” Reductively speaking that’s exactly what Haruichi Furudate’s sports manga is, following ShÅyÅ Hinata as he develops his passion for volleyball in a quest to become his high school team’s ace player. But it’s still fascinating to see the tension, stakes, and mannerisms of shonen action in a format like this. As a sports manga, it rightly treats the heat of competition that is any sport with all the fury and wild action it deserves, but you stay for the characters, as Hinata, his burgeoning rival Kageyama, and the rest of the Karasuno High School volleyball team become a fantastic unit on and off the court. It’s become one of the hottest anime around too, but the original manga is well worth your time. 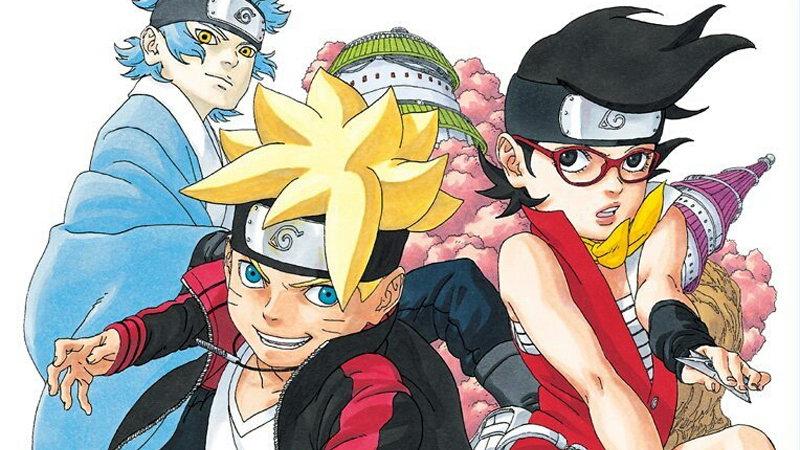 Naruto and Boruto: The Next Generation“Like One Piece, Naruto is on here for two specific reasons: One, it’s an iconic, beloved action series full of crazy ninjutsu shenanigans, epic rivalries, and more screaming than you can shake a kunai at. Two, like One Piece, it long as all hell. Not quite as chunky at 700-ish chapters, it’s still a vast saga you could really embrace as a distraction right now. And when you do, you can then immediately dive into its fascinating generational followup Boruto! Ninjas for days. Weeks. Months, even!

Doctor Stone“Another Jump series you might be familiar with thanks to its animated adaptationÂ is the fantastical post-apocalypse of Doctor Stone. Set thousands of years after a mysterious flash of light turned every human being on the planet to stone, and as pockets of humanity suddenly begin reviving from their petrification, it’s less of a high-spirited battle series like our other recommendations. Its protagonist Senku Ishigami uses his brain before his fists, and there’s fascinating ethical and moral dilemmas about how to rebuild human civilisation in the wake of an apocalypse that make it intriguing even in its quiet moments.

The Promised Neverland“Kaiu Shirai and Posuka Demizu’s future-set, nightmarish series is another option on here that’s a little different from the action-brawlers found elsewhere in this pile, not just in term of its methodical pacing, but its intense, almost horror genre-like premise: A group of kids at an idyllic orphanage discover their life of seeming luxury is actually meant to prepare them for being ritually sacrificed to petrifying demonic beings in order to maintain society. A race for survival that is as heart racing as it is heady, the kids seek to escape, survive, and reform their cruel world. The Promised Neverland is a decidedly different beast that could be up your alley if you want something a little less literally punchy.

There’s so much more than this available”again, almost too much! But this should give you plenty to dive into if you’re an intrigued first-time reader. You can sign up and download the app over at the official Viz Media website.