Earlier this week, my partner quit playing Animal Crossing: New Horizons. I have continued to incrementally improve my island with new establishments, nicer houses, and a preponderance of glassy-eyed, unblinking gnome statues. But mostly, I just fish and catch bugs. “It’s something to do with my hands,” I say to her in an attempt to explain my choice of leisure activity. It feels satisfying. It feels like progress. It feels like a job well done. But then I stop playing, and I worry that I’ve wasted my time.

For me and so many others, Animal Crossing has become the social distancing game of choice. It projects a verdant island paradise onto our overworked, flickering screens, an ideal escape from the cold interiors we’re vacuum-sealed inside of for the foreseeable future. It’s also perfect for our current moment in small ways: It can be played in bite-sized chunks, between remote work meetings, classes, and virtual hangouts. It’s on the Switch, so you can carry it from the bedroom to the living room, or, if you’re a truly depraved individual, to the bathroom. It’s mindless enough that you can play it while watching TV or chatting with friends over Discord. There are so many tiny new gaps in some of our lives for crumbs of idle time to slip through; Animal Crossing caulks them right up. Its particular illusion is especially gratifying: In a time of chaos, it feels like productivity aimed in a singularly satisfying direction, a straightforward track of immutable progress toward goals like home ownership. You put in the work, you’ll get the reward.

Right now, there is a societal pressure to use the time we no longer spent commuting, hanging out with friends, or going to events to be productive. Whether it’s explicit ovations in that direction from publications or just your friend who keeps posting videos of themselves virtuosically playing the guitar they “just picked back up” while reading several works of classic literature, the message is clear: We are trapped inside, so why not enrich ourselves? Isaac Newton did it, apparently! And so did Shakespeare! You and I are at least as good as those pioneering individuals whose names will forever reverberate through the halls of history. Of course, there’s been a backlash to this school of thought; this is an unprecedented pandemic, after all. It’s OK to feel overwhelmed and directionless while the planet spins off its axis. It’s OK to take a load off while you try to figure out what’s next. It’s OK to cope. 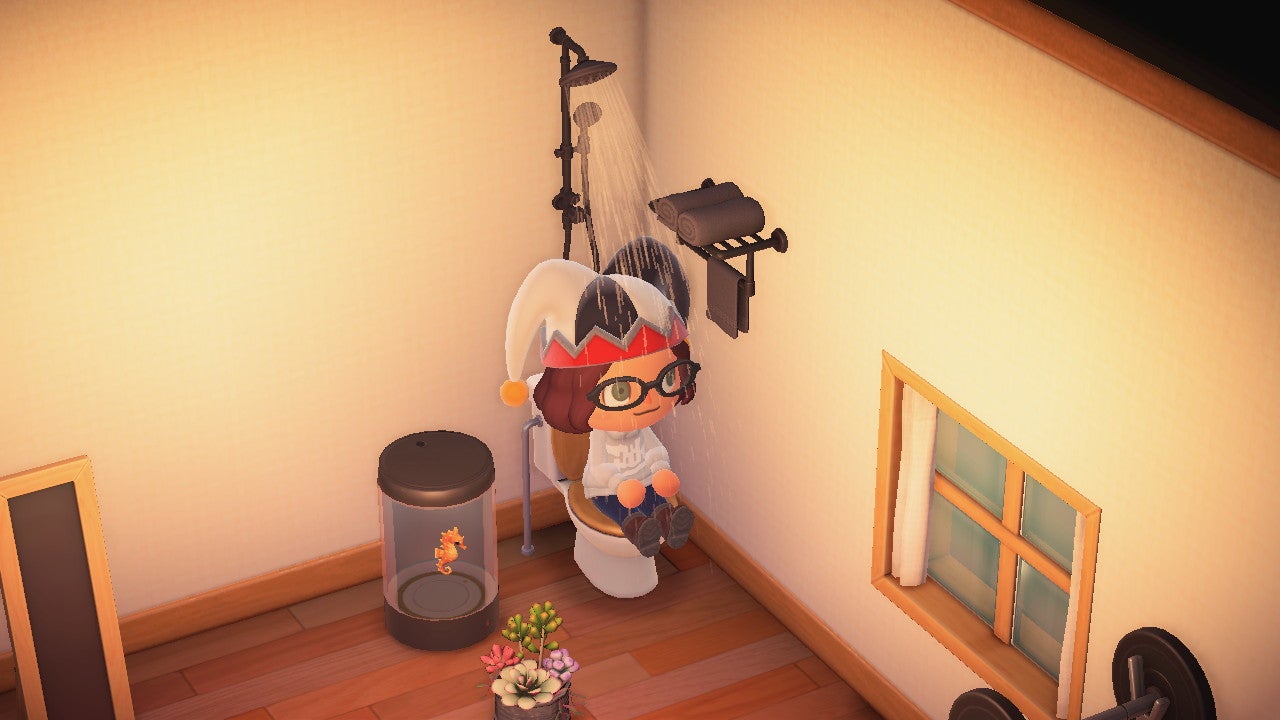 Still, while I tell myself that, I haven’t been able to escape the feeling that I’m not being productive enough. When I’m feeling that way, my first inclination is to pick up my guitar, read a book I bought months ago, or even just start one of many acclaimed games that litter my backlog, like Control. But then I turn my glance mere inches away from my computer screen, and there lies my Switch with Animal Crossing. I’ll play for just 15 minutes, I tell myself. Or maybe 20. 30? I’ll do a few chores: Pull some weeds, build some fences, save a neighbour from *checks paper* the coronavirus. That’ll be it. But then I decide to fish for a little bit. And I realise I need to dig up and deliver some fossils to museum curator Blathers. Oh, and the Nook store is offering double bells for an item I can craft, so I need to gather supplies for that. And hey, and I just remembered that I ordered a new piece of furniture, so I need to reorganise my entire bedroom to accommodate it. Two hours pass.

I feel accomplished when I’m done with all this. The complexion of my village, however minutely, has changed. My obsessive quest to buy as many garden gnomes as possible has paid off, and now I can surround the entryway to my island with them to trap visitors in a gnome hallway of horrible, beady stares. My home has gone from a hodgepodge of items I like to a two-room “interactive experience” featuring a giant dinosaur who listens to ska. I beam with pride. I turn to tell my partner. But midway through my explanation, I deflate. What is the point of all this? What am I doing? What have I actually accomplished, aside from adding another tower to a sandcastle that’s just gonna get washed away as soon as everybody moves on to a different game?

Then I go online. I see other people’s creations, and they blow my dinky little island out of the water. Their houses have pop culture themes and custom art. Their village layouts are clean and orderly, with paved roads and discrete landmarks. They’re inviting people to visit for guided tours, raves, and turnip sales. Seeing this makes me not want anybody to visit my island. I would be embarrassed. But I have another realisation, too: I will never care enough to put in the kind of work it takes to create such an impressive island.

It’s a fantasy that hasn’t really worked for me, because Animal Crossing still exists in a world that runs on real capitalism.

I mean that in terms of raw effort, but also in that there are different varieties of work. When I play Animal Crossing, I fall into a sort of aimless trance. I see a thing that needs doing, and then I do it. I chain together activities. There is rhyme and reason underlying parts of my island—like my dinosaur ska room and the little grove behind my house—but otherwise, it’s just the result of whatever I had on me at the time. I don’t want to think that hard while playing Animal Crossing. Its overall theme and pace suggest that I shouldn’t—it’s meant to be a soothing getaway, not some kind of brain-straining exercise in min/maxed organisation and productivity. Ideally, Animal Crossing is a place where I go to do a sort of ritualistic, mindless work. It’s like cleaning your kitchen: You go through the same motions every time, but you always come away feeling good about it.

But New Horizons is frequently at odds with itself. Seeing other players’ accomplishments makes it hard to just settle into a relaxing work rhythm. It quietly (and sometimes loudly) asks you to do considered, deliberate work. It’s filled with systems that encourage a min/max mentality: Items you can sell for double bells, more lucrative fruits you can collect, money trees you can plant to make passive income, turnips whose prices fluctuate wildly. These mechanics are often tied in with the game’s social systems. You can visit other players’ islands to collect different fruits and sell your turnips. This allows you to amass more money and build a more impressive island yourself. There is intrinsic satisfaction to improving your island, sure, but there’s also a performative element: After all that hard work, you’re gonna want to show it off. But if your island pales in comparison to other people’s, why trot it out for all the world to see? So you’ve got to be more deliberate in the construction of your island, more consciously productive in your work. 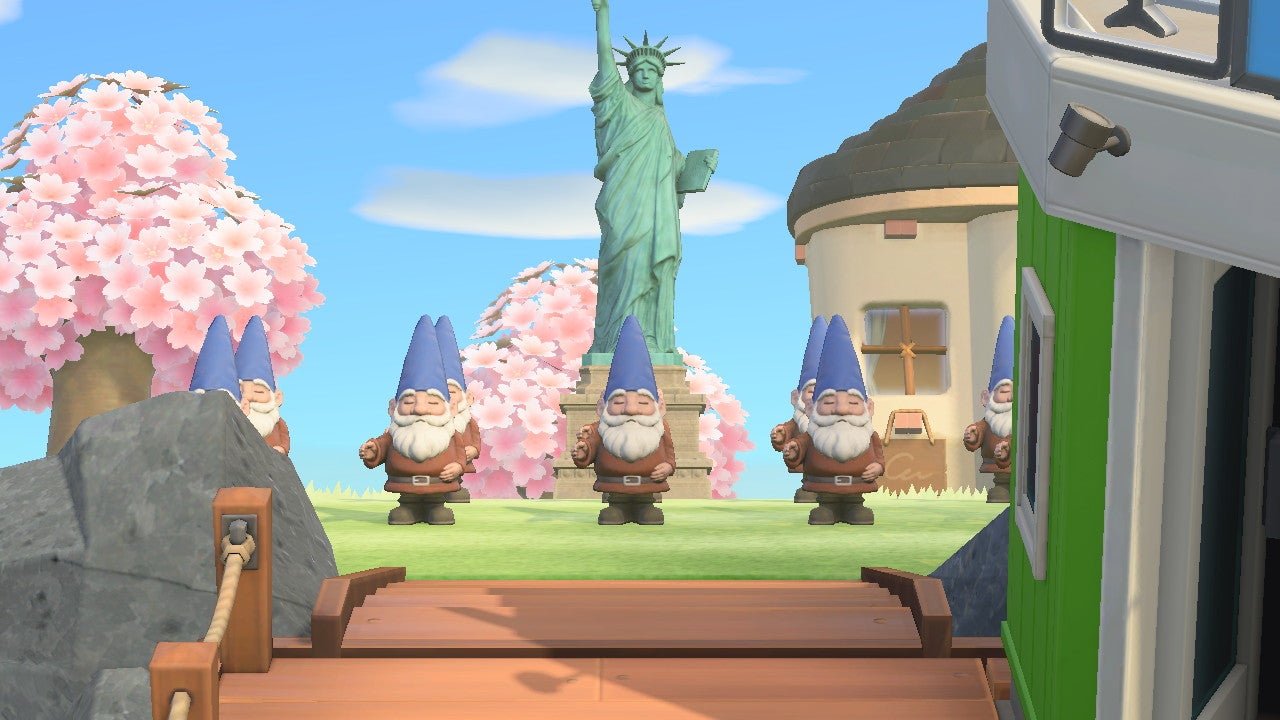 OK, I am actually kinda proud of this. (Image: Nintendo, Screenshot: Nathan Grayson)

Animal Crossing presents the fantasy of a world in which the mechanics of capitalism—production and the means thereof, bosses, buying, selling, earning, and so on—can be divorced from the imperatives underlying it. You can pay off your debts whenever you want. You can spend your time however you choose. The Nooks will never run out of money to spend on trash you find on the beach. The island will always sprout new resources. Islanders you force to leave will always find new homes. So you can go nuts. You can produce and produce and produce, and there will be no environmental consequences.

It’s an appealing fantasy, especially during a time when unbridled production and expansion have ultimately created a society that’s proven horrifically frail in the face of a pandemic that’s forced many people to stop working. But it’s a fantasy that hasn’t really worked for me, because Animal Crossing still exists in a world that runs on real capitalism. In our hyper-connected capitalist world, especially right now, productivity in general—not just in Animal Crossing—can be performative. We equate productivity with worth and meaning because it’s what we’ve been primed to do. Even if we’re stuck in our homes without a direct monetary incentive to produce, we still want to show off how productive we’re being—learning new skills, reading, writing—because then at least this abrupt pause to our lives can mean something.

So I find myself in a weird place with Animal Crossing. On one hand, I want to turn off my brain and use the game as a means of relaxing, unwinding, and coping during these terrible times. In some ways, it’s great for that. It offers an endless procession of simple chores that are nonetheless satisfying. Each day, I can enjoy my tiny ritual for a handful of minutes or hours. But the game also models real-world systems that make me feel like I should be doing more than playing silly old Animal Crossing, or that if I decide to play it, I should be doing so in pursuit of some greater goal: the ultimate island with a coherent theme and the best stores and the coolest villagers that demonstrates my own prowess and productivity. That’s not really what I want to do, but I nonetheless feel like it’s what I should be doing.

All of which is to say: I guess if I just wanted something to do with my hands, I should have taken up knitting.