The Bravely Default II Demo Is Weirdly Hard, So Here’s How To Survive

Last week, during a surprise Nintendo Direct, Square Enix gifted the world with a demo for Bravely Default II. The demo offers a taste of everything series fans should expect: lovely sprites, marvellous hand-painted backgrounds, and a return to the ever-rewarding Brave/Default turn-based battle system. But it also brought something unexpected to the table: a serious challenge.

When you start up the demo, you’ll get a friendly warning. “The story is separate from the main game, and the battle difficulty is just a little bit higher,” reads a pop-up window. Suuure, you might think. You’d be wrong—and that hubris is sure to get your team wiped out by wolves. (Wolves! Like I said, this demo isn’t messing around.) Impatient players might play for nine minutes before understandably throwing in the towel. This is just a demo, after all. But with a few tricks and a dash of patience, it can start to feel as rewarding as a full game.

Give everyone the right jobs.

The Bravely Default II demo gives players access to five jobs: Freelancer, Monk, White Mage, Black Mage, and Vanguard. Square Enix must be a champion of the gig economy because each character can hold two jobs at once, one as a main and one as a sub. These two jobs are intertwined; you can use any unlocked skills from either job, but characters will take on the ability and stat boosts from the main job.

Seth and Adelle are well-suited for the two punchy jobs (Monk, Vanguard) while Elvis and Gloria are better tuned for the magical ones (White Mage, Black Mage). You’ll definitely want at least one person on Vanguard, since that job comes with a ludicrously high defence boost. Monks are great, too: they have high HP and physical attack, and they eventually get a few helpful debuff skills. Whoever you set up as a Vanguard should have Monk as a sub-job to start off (and vice versa).

There’s merit in setting up both of your spellcasters as White Mages. In Bravely Default II, MP dwindles faster than a case of White Claws in a socially distanced apartment. But White Mages come with an ability called Kinetic Energy, which returns 10 per cent of any physical attack damage dealt as MP. So if you’re tight for MP, you can load up four attacks in a row and restore a significant chunk. You could also cast a few powerful spells and round out your turn with a physical attack or two, essentially recouping any MP you spend in that turn.

You needn’t worry about making anyone a Freelancer in the demo.

Grinding is essential for levelling up your characters, of course, but it’s more important for levelling up their individual jobs. Winning a battle begets both experience points and job points. Experience points do what experience points always do: increase a character’s HP and other stats. Job points, on the other hand, unlock a character’s abilities in a particular job. There are seven levels, each of which grants access to a new active or passive skill. Before you try to tackle the main quest of the demo, level up each of your character’s sub-jobs. That way, you can switch to the main job and still have access to all of a sub-job’s skills. (Exhibit A: A White Mage rocking a fully leveled-up Black Mage sub-job can still use Blizzara, a powerful ice spell.)

It’ll take a bit to grind those sub jobs up to the levels you want, but grinding in the Bravely Default II demo is more engaging than your standard RPG grind. Even with leveled-up characters, one wrong move can lead to your entire team getting wiped, meaning you have to stay engaged. Plus, the battle music—and there’s no room for discussion on this matter—is objectively the best battle music in history. It’s so good you’ll want to get into battles just to hear that hook.

Anyway, if you can’t stomach a little grinding, why are you playing a Square Enix role-playing game in the first place?

You can still speed up battles.

This might seem like a no-brainer, but it took me roughly 42,861 battles to figure it out, so I thought I’d share. You can speed up battles by pressing right on the D-pad, which makes the grinding process way less of a grind. Press right once to double the speed or twice to quadruple it. There’s sadly no option for triple speed, which would’ve been the ideal battle speed (if you’re asking for feedback, Square Enix).

Between battles, don’t waste potions on replenishing your HP or ethers on your MP. The inn costs 100 pg per night, and it’ll fully restore your team. You’ll earn at least half that much from each battle. So if you wait at least two battles to run back to the inn, it’s like you’re not even spending any money. (That’s how financial literacy works, right?) Trust me: You’ll want to save those items for the demo’s dungeon, the Sandswept Ruins. You won’t be able to save on the fly in there, so getting wiped can be a real time-waster. Plus, a trip to the inn and back takes all of 37 seconds.

The demo does a fine job outlining the Brave/Default battle system, but it neglects to tell you that you can probably wipe the floor with most of the starter baddies. At the start of each battle, Brave as much as possible, then load up four attacks in a row. Be mindful, though: If you don’t take out enemies in that one turn, you’ll leave yourself wide open for three turns of attacks from your foes. That’s why, at first, the process works best against puny little goblins. Once you level up a few times, you’ll be able to do the same to orcs and—get this—even wolves.

It can be easy to stroll right past the shop in Savalon, especially if you’re playing with your Switch on handheld mode. Don’t miss it. As you’re heading out of town, you’ll find it on the southeast road before the exit. There, you can stock up on essentials, like Phoenix Downs or Hi-Potions, but you can also nab some gear that’ll give you a serious edge in battles. Get Wizard Rods for Elvis and Gloria, give Adelle and Seth some sharp weaponry (an axe for your Vanguard and a dagger for your Monk until they get Bare-Knuckle Brawler), and grab better armour for everyone. I forced everyone to wear a Caravan Coat. The Vanguard job allows you to pile on way heavier armour, too. The stat changes may look small on paper, but they pay huge dividends. 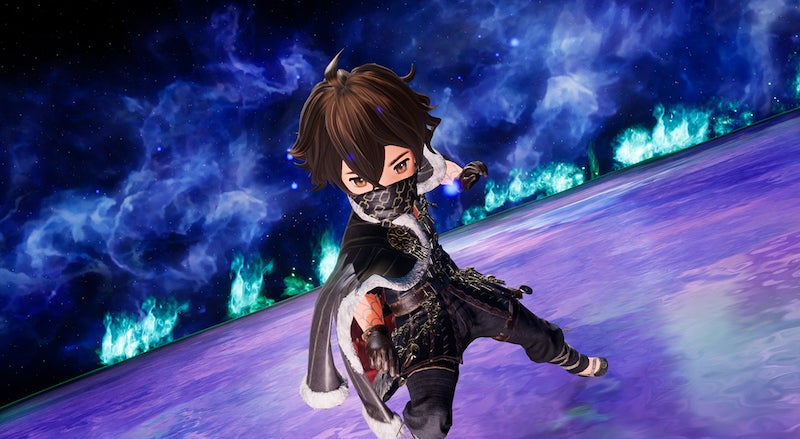 After you beat Master Thief Bernard—the Dwayne Johnson-sized boss of the Sandswept Ruins—you’ll unlock the Thief job. The job comes with a good ability: Steal Breath, which heals HP equivalent to damage inflicted. What’s more, unlocking Thief opens up two more sidequests to test it out with. The credits may have rolled, but you can just go back into the game and head to Savalon. There, you’ll be able to pick them up. (Bonus: You’ll even get the chance to take on an optional boss!)

You can change your default movement speed.

Under the game’s settings, you can switch the default movement speed from “walk” to “run.” This might seem like a matter of preference, and for the most part, yeah, fine, it is. But switching to run also offers the tiniest of gameplay advantages. If you approach an enemy from behind and press A, you’ll start the battle with an extra Battle Point. Running allows you to quickly close distances on unsuspecting enemies.

Sure, when you’re set to walk, you can just hold the B button to run. But switching the default speed to run means you don’t have to remember to do so. And there’s enough minutiae to remember about this demo.

Put the battle music on repeat.

This is less of a tip and more of a challenge for Square Enix: Put this soundtrack on Spotify, please!