There Won’t Be Any More PS5 Stock In Australia, New Zealand... 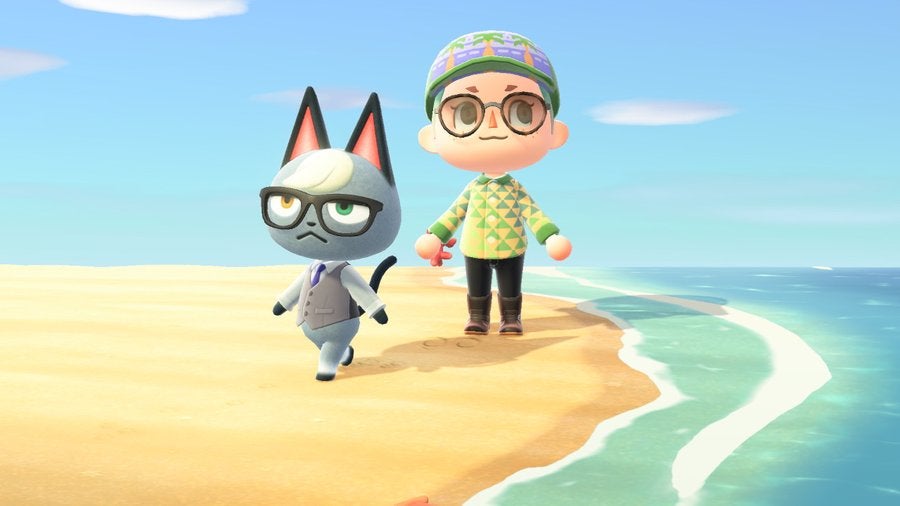 Animal Crossing: New Horizons is nominally a chill game about seeing what each day holds and adjusting as you go. But if you’re an intense interior designer or an entrepreneurial turnip seller, you’ll want to pick up the pace. Thankfully, there’s an entire ecosystem of tools and websites to help you make tons of bells and, if you’re willing, plenty of ways to get the villager you want.

I took the plunge into a portion of these fansites over the weekend, particularly last night as I tried to find an island to sell my turnips. Turnips, if you don’t know, can be bought on Sunday for a variable price. The idea is to buy low and sell high. Prices change from island to island, so coordinating with other players can lead to a fat profit. That can mean talking with friends or, if you’re someone like me, blasting out a call to Twitter followers. But what if your options are more limited? Maybe you don’t have many friends playing this game, or you don’t use social media much. In that case, there are a variety of sites for tracking your turnip prices and getting the best returns. Among these is Turnip Exchange.

Turnip Exchange is a site where players can post their island’s turnip prices and organise queues for visitors. They can set how many people can wait in line and determine how many folks at a time are given the “Dodo Codes” that allow for travel to their island. Turnip Exchange is both a powerful community tool and a bit of a warzone. In my time on the site last night, I found that queuing into islands with high turnip prices was a genuine battle and one only made worse by the fact that some of the islands I was waiting to visit would shut down—either the owner was done for the night, or perhaps, as sometimes happens, connection troubles nuked everyone’s access. That’s understandable; if someone is selling turnips for around 620 bells, the lines to get into an island will be long. More illuminating were the separate tiers of islands where some of the best prices were gated off behind fees. 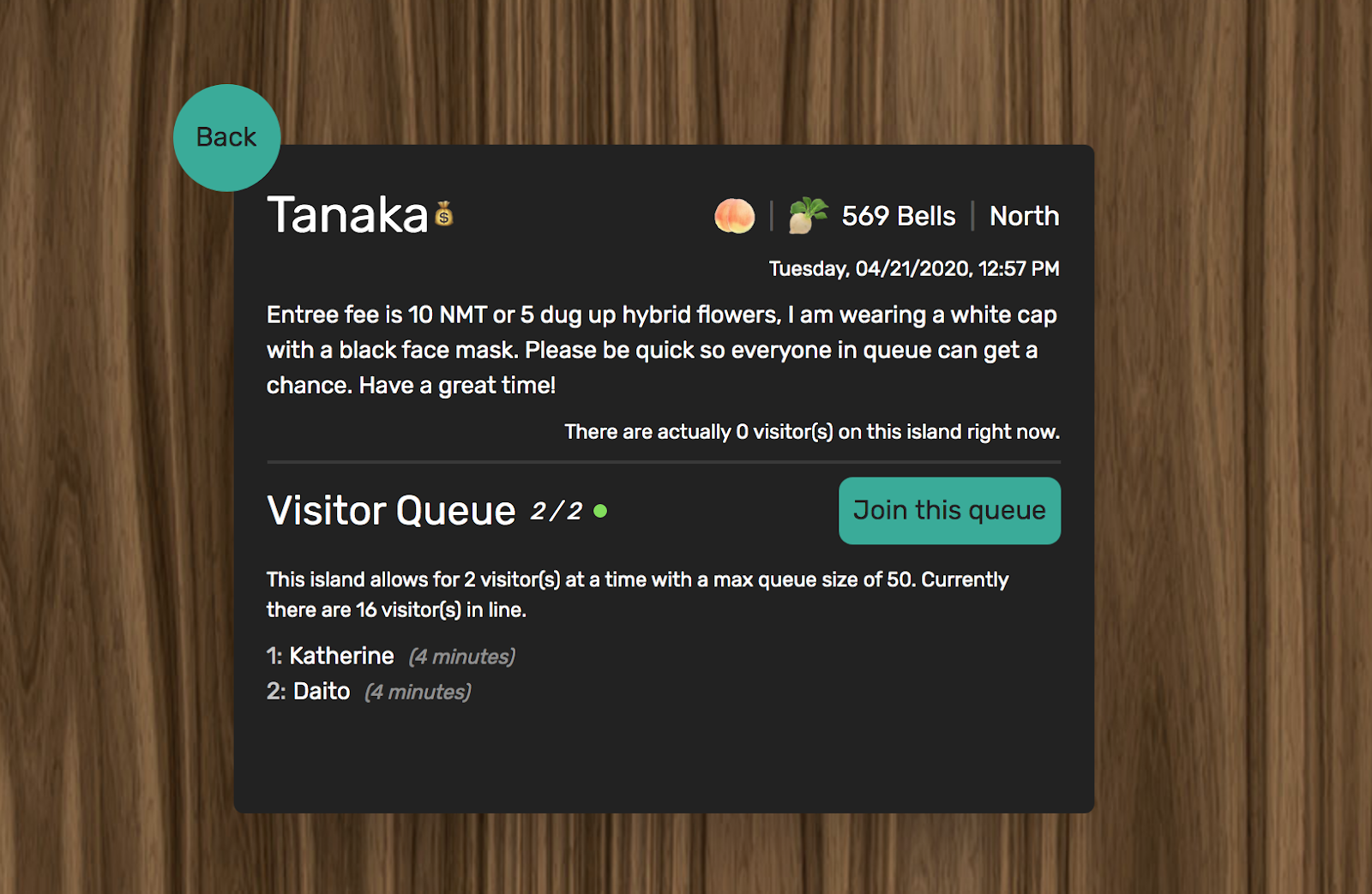 There’s nothing wrong with charging a fee for island access in and of itself, and many people’s asks are very modest. In perusing the site, I found players asking for some tip money if players could spare, or maybe a Nook Miles Ticket. But some users attempt to charge rather large sums.

“Entry fee is 5 x 99k bell bags EVERY RUN. Pay upfront before entry. Unlimited runs as long as you pay,” said one entry this morning. Another, as seen in the screenshot above, asked for at least ten Nook Mile Tickets. Bells and Nook miles are plentiful if you’ve played this game for a time, but if you’re proceeding at a casual pace, these prices are too steep to consider. This is not an intense economic divide between players, but there is a spectrum between the more accessible communities and those which are more gated off.

Turnip Exchange also warns that some fee-locked islands might be risky. If a user asks for payment upfront and somehow lied about their turnip prices, you could very well get scammed. For my part, I waited in a queue of four players on a quietly advertised island with no official fee. My turnips sold for a modest 513 bells each (I had bought them on Sunday for 93) and I walked away with about 631,000 bells that I used to finally expand my house back on my island. Nice and easy. 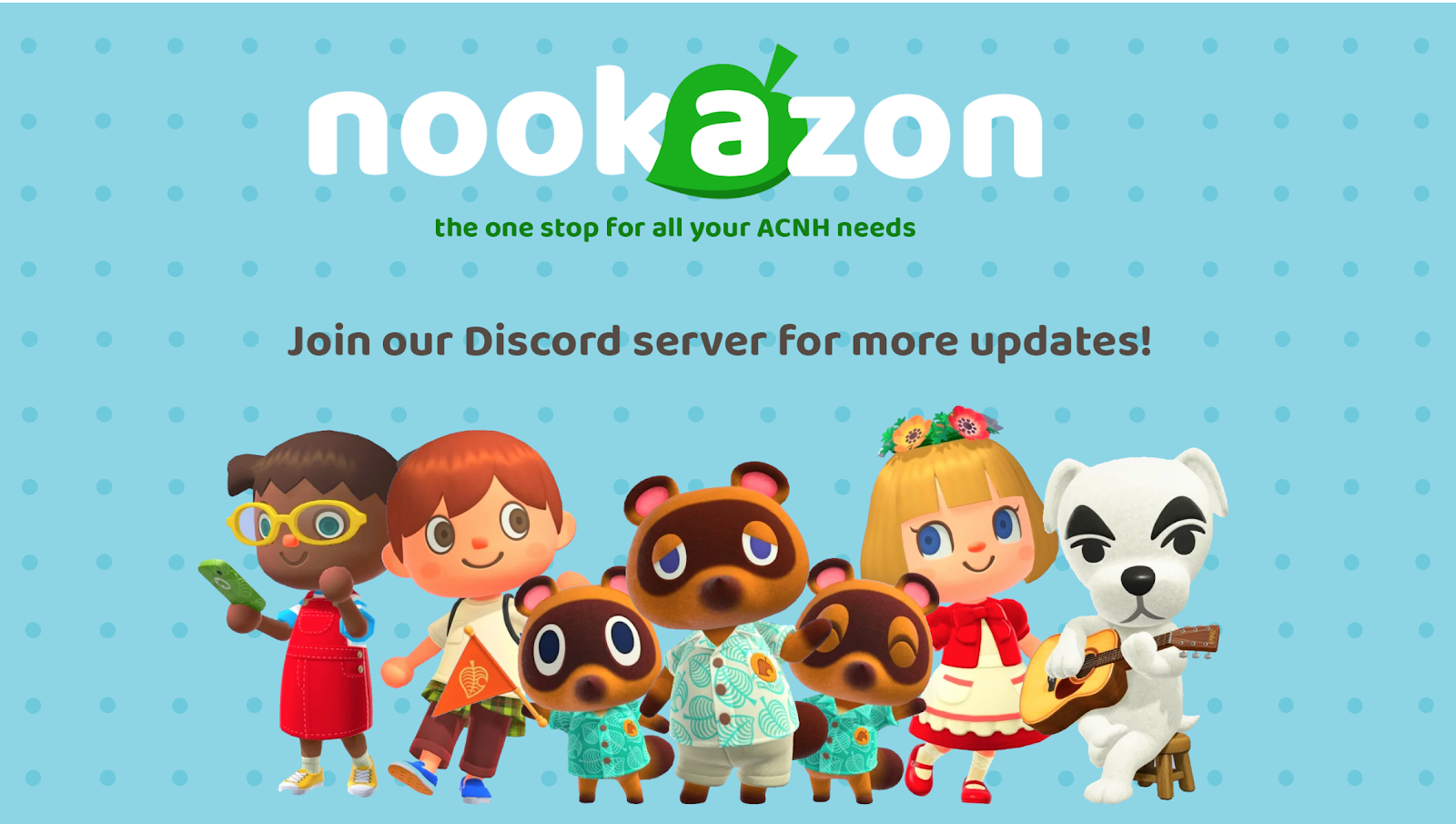 If you’re looking for something more direct, there’s always Nookazon instead. This sales repository is much less of a gamble. You want a coffee cup? Well, someone’s probably posted a listing for it in the last thirty minutes, and you can shoot them a Discord message to talk about a price. In most cases, Nookazon functions more like Craigslist than Amazon. Folks have extra crap, you ping them, then you each decide on a price and make a somewhat shady exchange. It gets more complicated when more unique items come into play, like villagers themselves.

When players remove a villager, there’s a period of time during which other players can arrive to invite the departing villager to their own island. Nookazon’s villager exchange listings have explicit pricing demands, unlike most of the other listings, which invite users to make an offer. Raymond, a very popular new character, often comes with a demand of millions of bells or a specific villager the seller wants in exchange. 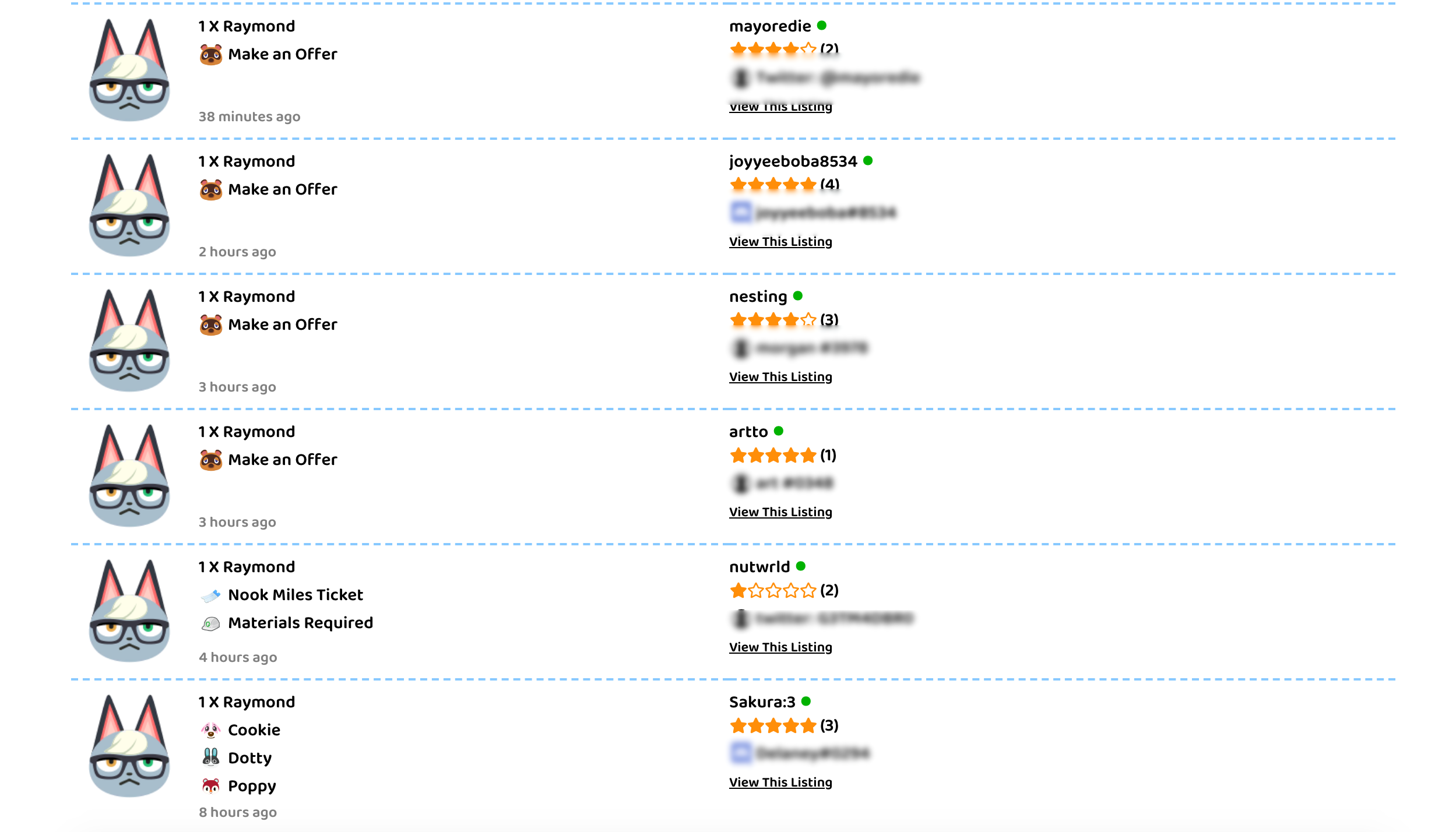 Some sellers offering up this tiny cat twink have listed no specific demands; I’ve reached out to several of them but have not received a response. I imagine their DMs are packed as they wait for the most outrageous deal to accept from a frenzied fan. Still, if you want it, you can find it on Nookazon. To avoid scams, Nookazon allows sellers to receive a ranking. It even marks reported scammers in their listing once they are caught.

But maybe you’re looking for something even more reliable. Something you can hold in your hands and use more than once. Less of a digital deal, more of an actual product. DIY sales sites like Etsy have been the go-to place for accessing amiibo and other Nintendo accessories for years now. At the height of Breath of the Wild, sellers could turn modest profits by producing custom amiibo cards for characters who were only unlockable via amiibo, like Fierce Deity Link. Amiibo use NFC chips to store data, and there were plenty of old Animal Crossing cards with these chips printed for the release of New Leaf. NFC tech isn’t proprietary to Nintendo, so if you have some chips and an app to write data onto those chips, you can make your very own amiibo. 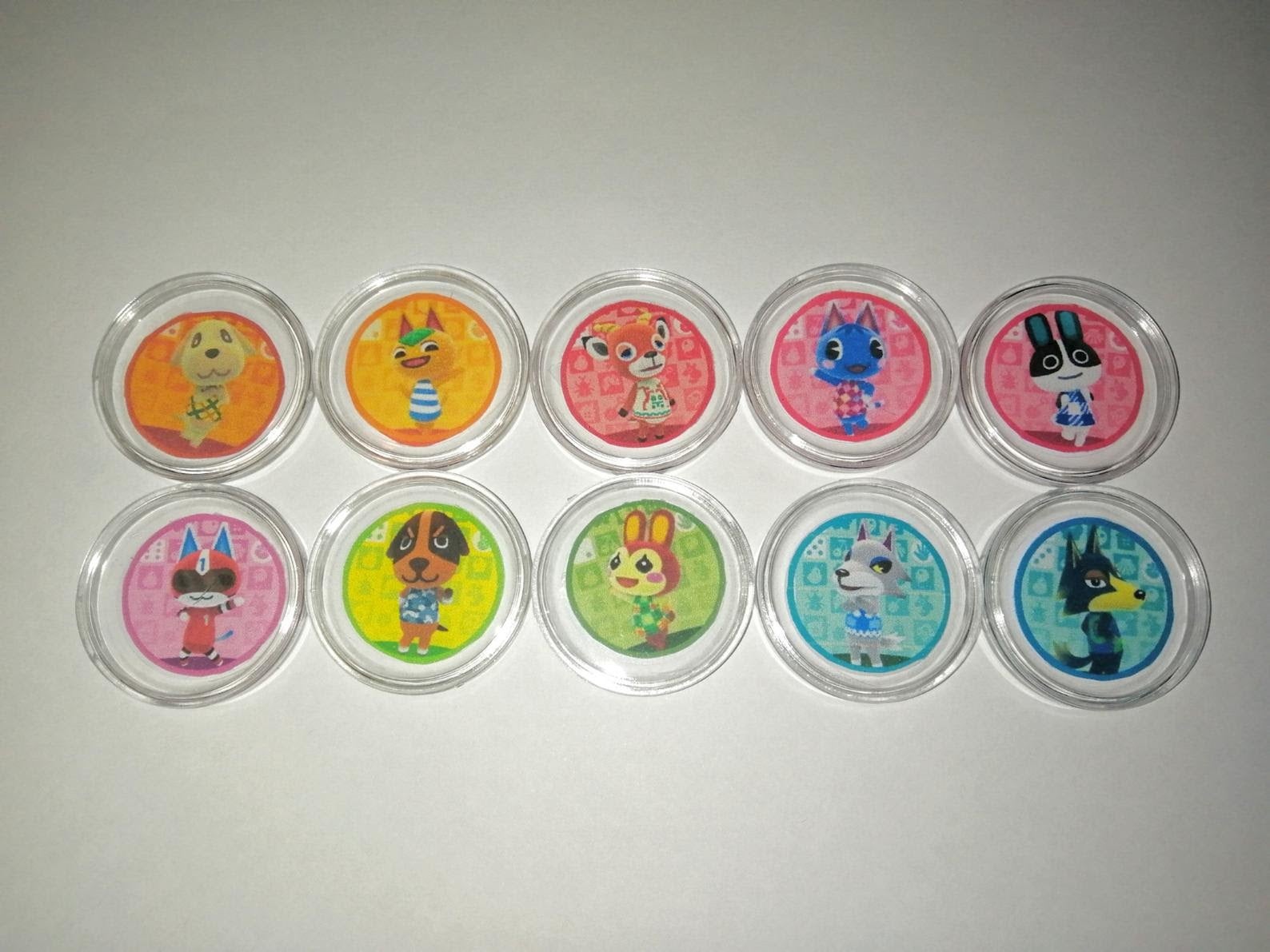 Since amiibo themselves are often subject to scarcity problems, buying official products can be expensive, even without the additional complications of the covid-19 pandemic affecting supply chains. An Amazon search for a single Animal Crossing card for the villager Ankha shows prices over $US100 ($158) dollars for a single card. As a result, Etsy sellers have risen to the challenge to provide amiibo and villagers to players. That can mean reproduction cards, bespoke amiibo coins, or simple hand-drawn work with NFC chips inserted into the page. Find the right seller and you’re only paying $US10 ($16) to $US20 ($32) bucks depending on how artisanal you want your amiibo to be. These sellers readily provide but also risk Nintendo’s attention from time to time. Even so, the production of home-made amiibo is something that’s never really stopped. You want a cute coin that lets you summon Bob the Cat? It’s there. For a price. You might need to wait a while though, since demand is as high as it has ever been.

Animal Crossing’s popularity has made these online marketplaces inevitable. In the case of players desperately looking for an item, these services can seem essential. New Horizons doesn’t provide in-game marketplaces or exchanges. It’s been up to players to fulfil the needs of a wider community. The result has been an eclectic economy where communes give out goods for free, opportunists vye for Nook Mile Tickets, and artists turn the current cultural moment into a way to earn a buck or two. Maybe that’s crass—for all its focus on loans and payments, Animal Crossing isn’t really a game about capital—but it is the natural result of a popular game where there’s still demand in the real world for all sorts of digital goods.