Hellpoint Is A Souls-Like With Some Cool New Ideas 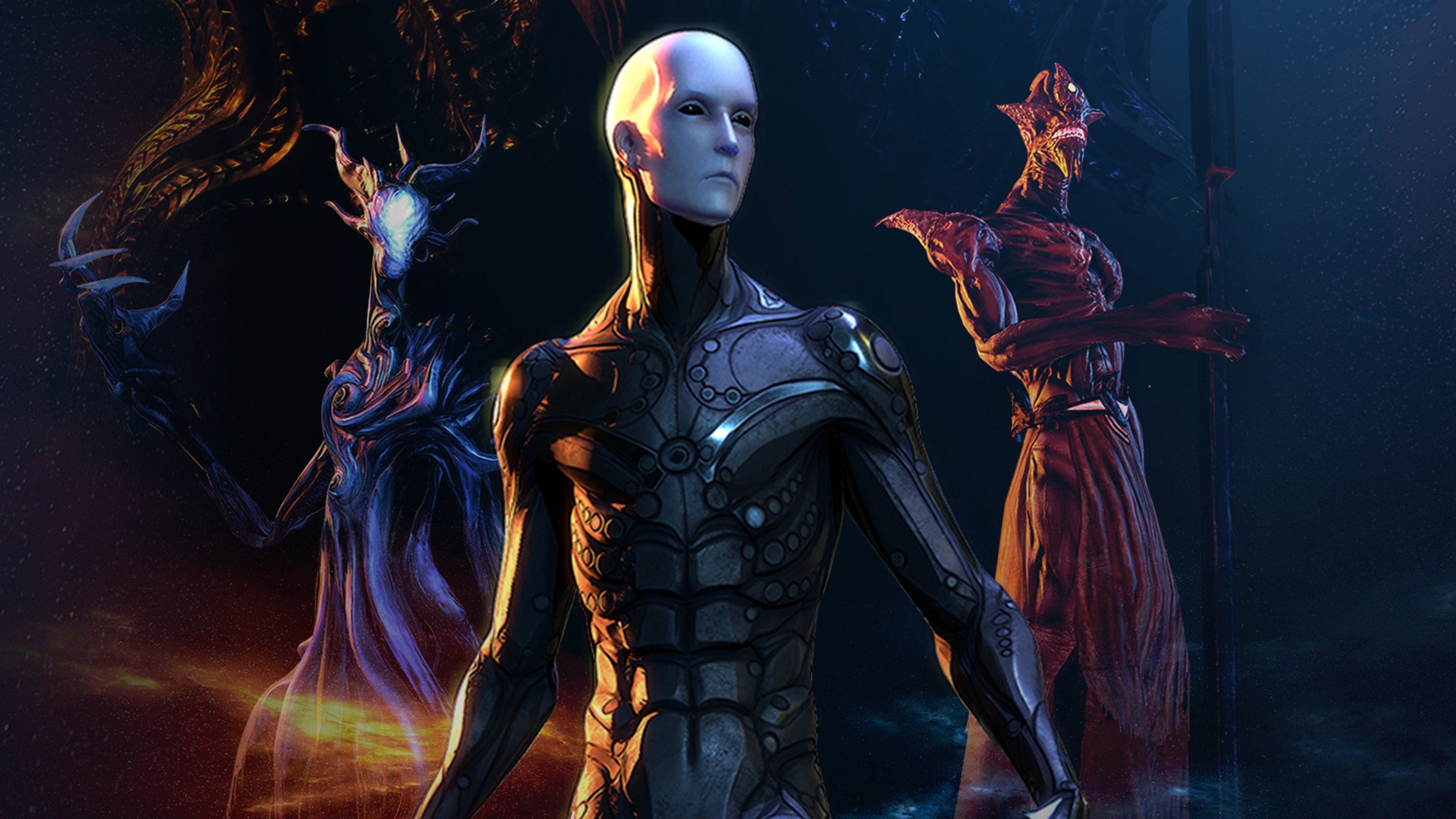 Hellpoint wears its influences on its sleeves. It’s obvious that Canadian developer Cradle Games knew what it wanted to make—Dark Souls in space—and set out to do just that. I recently had the chance to try a preview version of Hellpoint on Xbox One, and while I often found it frustrating from a technical standpoint, the setting and atmosphere were enough to leave me hungry for more.

Irid Novo is a massive space station that, for some unknowable reason, was built around an active black hole. What was once meant to be a symbol of research and innovation is now a foreboding maze of death. It’s within this floating space coffin that Hellpoint squeezes you into the tight, latex suit of the Spawn, a 3D-printed human being given life by a mysterious entity known as the Author.

I spent several early moments in Hellpoint wandering the starting areas, trying to take everything in. The pond the Spawn emerges from is vaguely religious, as if the character is recovering from some sort of baptism. Wires emerge from walls and disappear into ceilings, looking more like worms breaking free of metallic skin than the technological necessities of space travel. Lighting is sparse and angled in ways that make Irid Novo’s cramped insides feel like ancient tunnel systems carved into the Earth.

As much as Hellpoint breaks free of the Dark Souls framework with its visuals, it comes crashing back down once you spend time with the game’s basic mechanics. Light attacks are bound to the right bumper, with strong attacks on the right trigger. The left bumper blocks, the d-pad switches weapons, and evading is as simple as pressing B. This made it easy for me to dispatch the first few hollow-like enemies Hellpoint threw at me and gave me a foundation for tougher fights with bosses.

The similarities don’t stop with combat. Hellpoint has bonfires, represented instead by a kaleidoscopic tear in the fabric of spacetime rather than warmth and kindling. Axions function as both experience points and currency. When you die you drop all axions you’ve accumulated, and you can pick them back up if you make it back to where you bit the dust. Bosses lurk behind energy shields that function as fog walls, giving you the chance to take them on without interference from enemies you pissed off along the way. 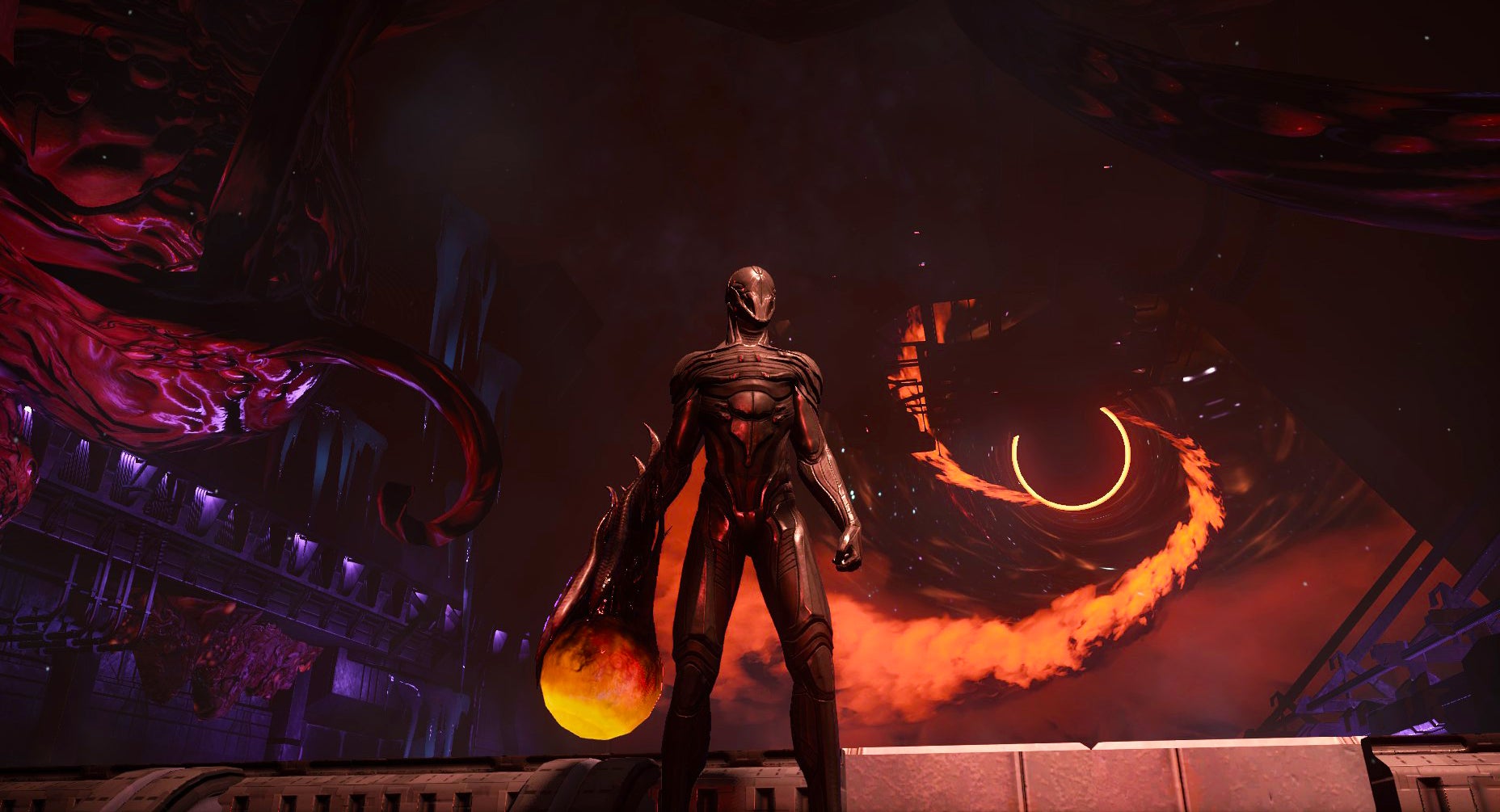 But that doesn’t mean Hellpoint is content with being yet another Souls-like game. While you only get two healing vials to start, attacking enemies refills your reserves. This added a lot of tension to fights, forcing me to regularly weigh the benefits of taking a risky swipe at a tough foe in hopes of earning another hit of regenerative stim. Hellpoint turns combat into a tightrope act of preserving your health while strategising the best ways to maximise your healing abilities.

Hellpoint also asks you to keep an eye on the Irid Novo’s orbit, represented by an occult chart in the corner of the screen. The space station drifts around the black hole in real time as you play, and its position impacts the game in various ways. While travelling through an early area en route to a boss, I came across a completely new enemy I had never seen before, wandering among the scrubs.

It grasped an imposing spear, and its giant frame supported a massive, metal ornament akin to a waning moon. After watching from a safe distance, I slowly approached and managed to take it down in one try. But it was a hard fight, much tougher than the area’s normal enemies. Hellpoint’s developers told me that the space station’s orbit will initiate other random events as well, like spawning hordes of enemies and revealing secret doors, but the surprise mini-boss was all I saw of that mechanic during my few hours with the game.

As fun as all this was—I’m a humongous fan of the Dark Souls series and love when new developers take its trappings for a spin—any entertainment value I found in Hellpoint was sandwiched between moments of frustration. The game is still in development and technical performance was a consistent issue for my Xbox One, especially in the preview build’s later areas. The environments, while hauntingly beautiful, were let down by an unstable frame rate and buggy textures. Fighting just one enemy would cause the game to stutter and stall. Sometimes my attacks failed to register altogether, turning killing blows into new opportunities for enemies to knock me on my nanofiber arse. Hellpoint was originally scheduled to launch on April 16 but has since been delayed to a Q2 2020 window; I hope this will give the developers enough time to address these issues before the full game debuts.

That said, the little slice of Hellpoint I experienced was still full of incredible moments, the best of which came during my fight against the very first boss, the Archon Slaver. In the hour or so leading up to my encounter with this challenging foe, I occasionally came across vents in the floor that, while I stood on them, caused a metre to appear next to my character. This metre never seemed to do anything no matter how high I let it grow, so I pushed it to the back of my mind. During my first attempt at the Archon Slaver that metre returned, only this time it went down as the boss landed repeated attacks. The closer it got to the bottom, the slower my character became, ice crystals forming across their body. The metre was a temperature gauge!

I changed my strategy from a full-on assault to one of hit-and-run precision, ducking into the boss’ range for a few swipes of my ceremonial dagger and evading before it had a chance to retaliate. The arena was small but included two of those warming vents from before, allowing me to undo the Slaver’s freezing debuff. The fight proved a simple matter from there. It’s not a big or unique mechanic, but it’s a nice demonstration of Hellpoint’s dedication to giving players just enough information to learn on their own.

The way in which Cradle Games mixes the gameplay of Dark Souls with the sci-fi horror of films like Pandorum and Event Horizon is so unique and compelling that I can’t believe more games haven’t attempted it. There’s no hiding that the performance is rough, and I understand now why it was delayed without a concrete release date. But the fact that I fought through the technical frustrations and still considered it an enjoyable experience is a testament to the soundness of the core mechanics. I can’t wait to play more Hellpoint. The hunger gnaws at the back of my head like a cosmic parasite.