How To Lose Friends And Alienate Villagers 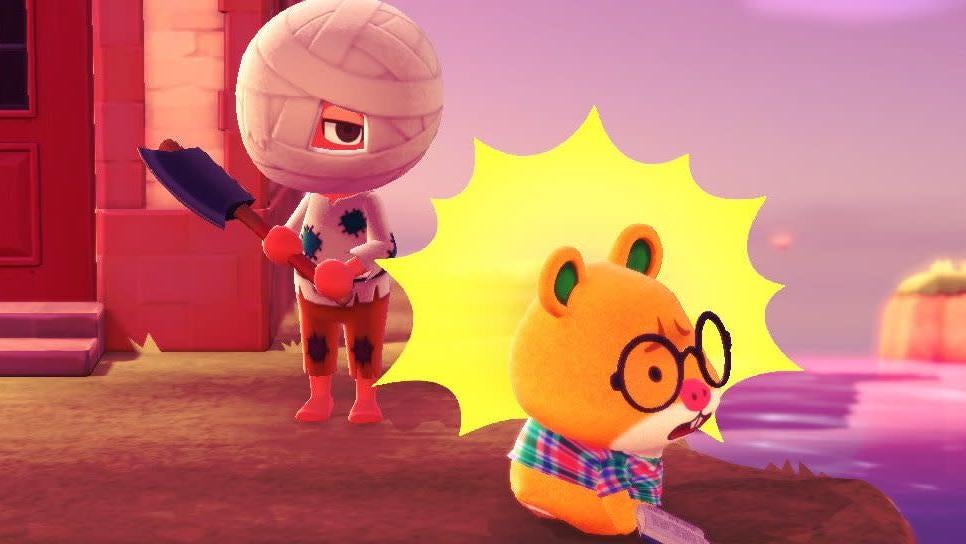 The heart of Animal Crossing: New Horizons is the friendships you build with your animal neighbours, each with their own quirks, aesthetics, and personality traits. So when Tom Nook announced that the humble island of Bussy Beach had its very first visitor at our brand new campsite, I was ecstatic. I rushed to the campgrounds, hopeful for an eccentric animal I could eventually call my neighbour.

Would it be Stitches, the walking patchwork teddy bear? Perhaps it’d be Audie, that peppy new wolf everyone had been talking about. Or maybe my dreams would finally come true and I’d meet Merengue, the rhino pâtissière with cream fur and a strawberry horn. But since you only have room for 10 residents out of New Horizons’ 391 available villagers, there is always the chance you’ll get a villager you find boring, obnoxious, or worse.

I entered the tent, and there I saw a pitiful creature, half my size, clad in naught but a madras plaid shirt. A pair of beady rodent eyes stared back at me from behind circular glasses. His name was Graham and I hated him instantly. This just wouldn’t do. I tried promptly sending him on his way, but I was given no choice but to invite him to live on our fair island (I’d later realise that the first camp visitor your island receives is the only villager you are absolutely required to accept). And so out of spite, I built his home in the most remote part of the map, on top of a cliff with no inclines that was far, far away from the main village.

Get incel Hamtaro OUT OF HERE pic.twitter.com/P3RmjRbu56

You might wonder what it was about Graham I found so unpleasant. If I were being polite, I’d say he simply didn’t fit with the rest of my neighbourhood. If I were not being polite, I’d say he was ugly, his personality was ugly, and he was killing my island vibe. Bussy Beach had always been a haven for chill eccentrics and sweet little weirdos like Lucky the mummy dog or Mira the cosplay bunny. Sure, we weren’t all perfect. Bam’s constant workout talks occasionally worked my nerves, and entertaining Wendy’s delusions of popstar grandeur could be a bit taxing, but nonetheless they had endeared themselves to me and I could accept them, flaws and all. This wasn’t the case with Graham.

Amongst my circle of friends, he had quickly become colloquially known as Incel Hamtaro for, well, having big 4chan energy. His smug sense of superiority and weirdly flirtatious behaviour with player characters got a little uncomfortable, and from what I saw online, he is generally not well-liked.

GRAHAM wtf why do you live like this??! #AnimalCrossing #ACNH #NintendoSwitch pic.twitter.com/qecX6ZZQ5N

I never saw another villager in his house, which I might add was entirely composed of servers, loose cardboard, and a shrine to two lady bunnies who don’t even live here, all of which belie his constant claims of popularity and style. The vibes were off and I wanted him gone. So, having not played a mainline Animal Crossing since 2005’s Wild World, I researched the most expedient ways to have a villager move.

Most guides and forums I read on the subject came back to three specific methods for “kicking out” villagers: a daily regimen of either hitting them repeatedly with your net, ignoring them while talking to every other villager, or filing regular complaints to Isabelle, all of which I admittedly struggled with committing to. I was Bussy Beach’s official Island Representative, and none of these options seemed befitting of my position. I pride myself on being a very direct communicator when facing conflict. Was there really no available option to ethically break up with a villager? Was I really willing to resort to bullying in my attempts to oust a villager I didn’t care for? 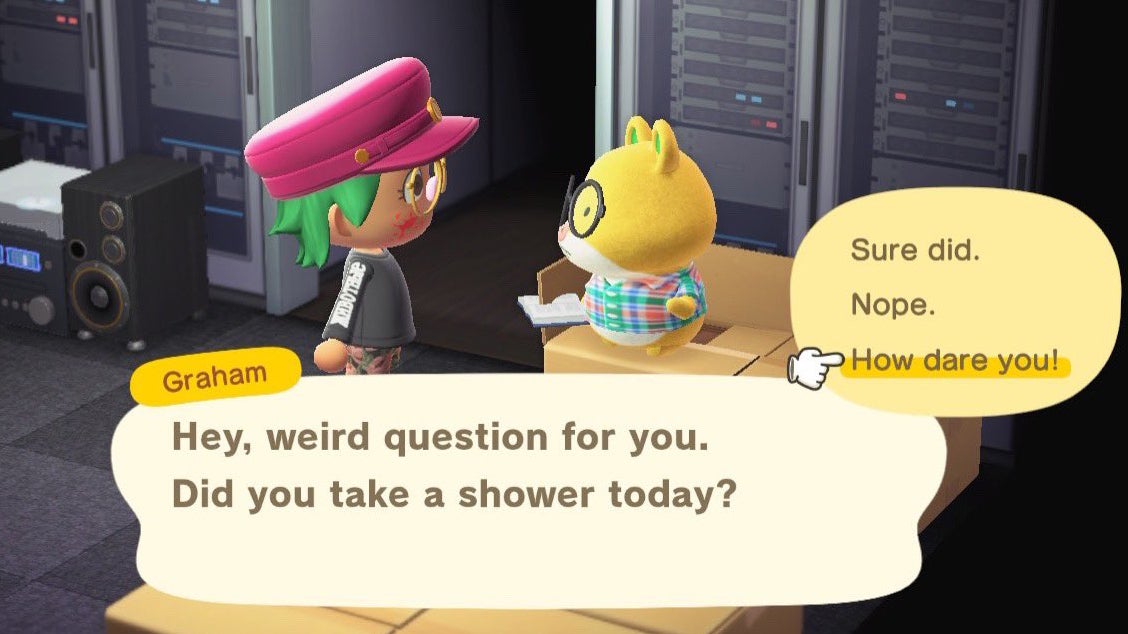 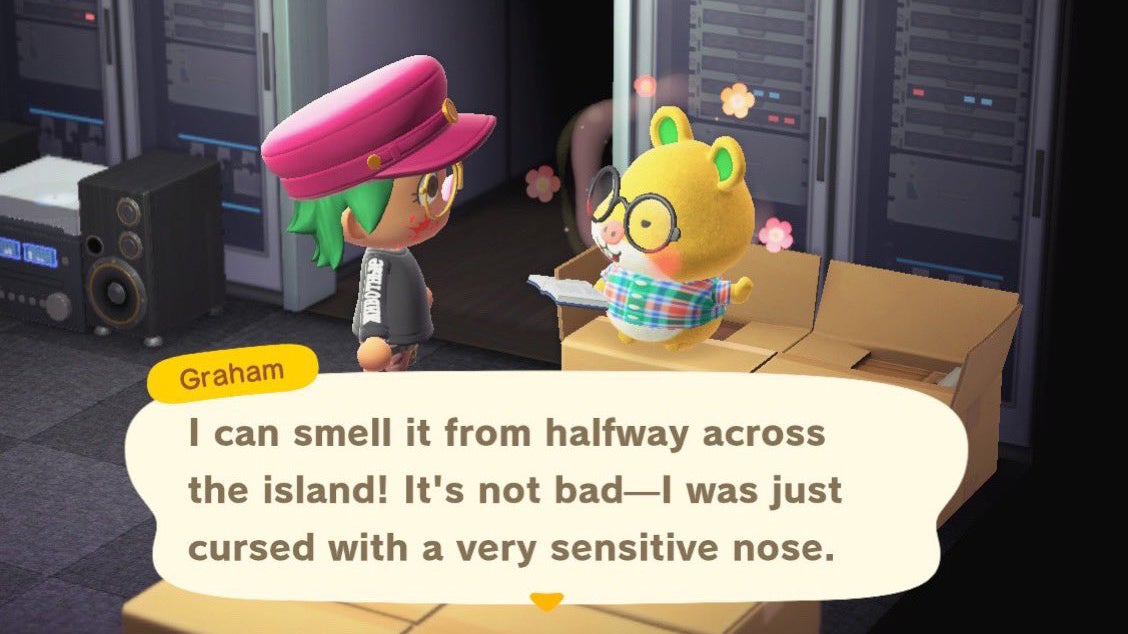 This animal had truly crossed me. Graham had to go by any means necessary. For the good of the island.

And so I began a two-week experiment. Every day, I filed complaints to Isabelle about Graham acting inappropriately, which unfortunately felt an awful lot like snitching (my girlfriend rightfully asked if Isabelle was a cop—I couldn’t answer her question). For the first week, I bonked Graham with my bug net every time I saw him for good measure. Over the second, I made a conscious effort to speak frequently with every other villager while icing him out and running away whenever I saw him. I thought surely he’d get the message, but nothing came of it. In fact, some of my favourite villagers approached me considering whether they should leave the island to broaden their horizons (I said no!). All the while that hamster menace hung around the island I worked so hard on, sipping his orange juice, utterly oblivious to my hatred. 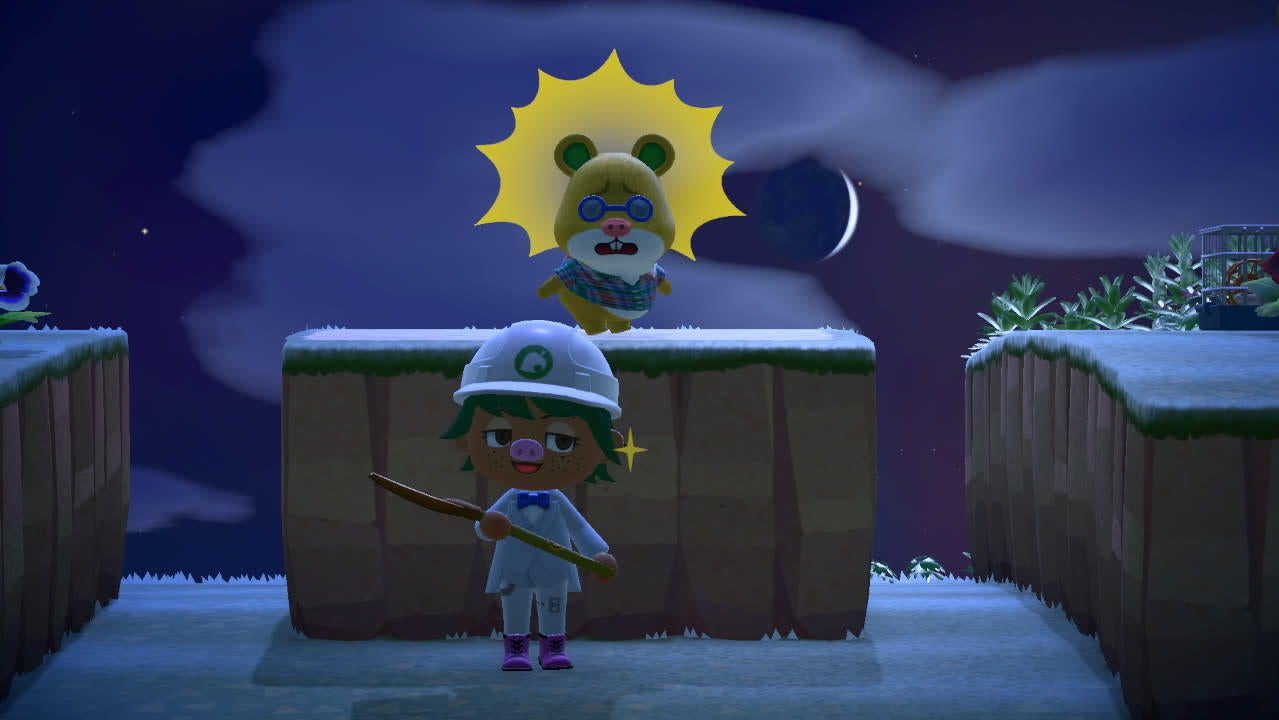 I snapped. Much like in real life, the system (by which I mean Isabelle) had failed me when I asked for help. I started devoting much of my island time to tormenting Graham in increasingly outlandish ways. I cut down trees he sat under, but he paid no mind. When I terraformed the land around him to leave him stranded on a plateau in the middle of a waterfall, he opened a book and walked in circles. At one point, I even left a cage with a live hamster running around inside on his doorstep. He callously laughed it off. 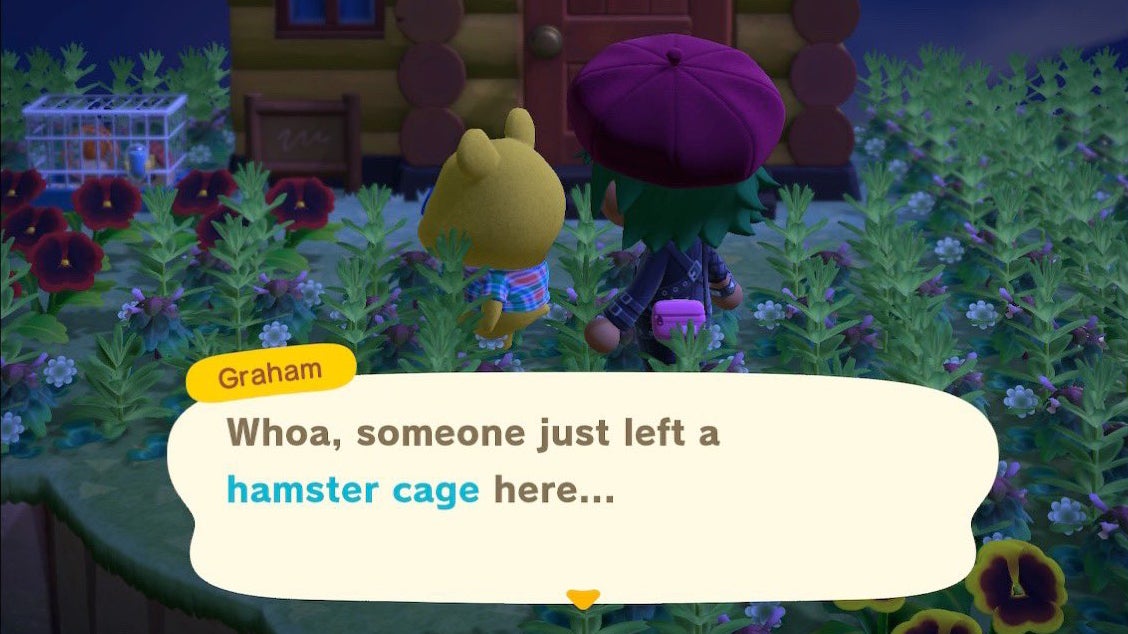 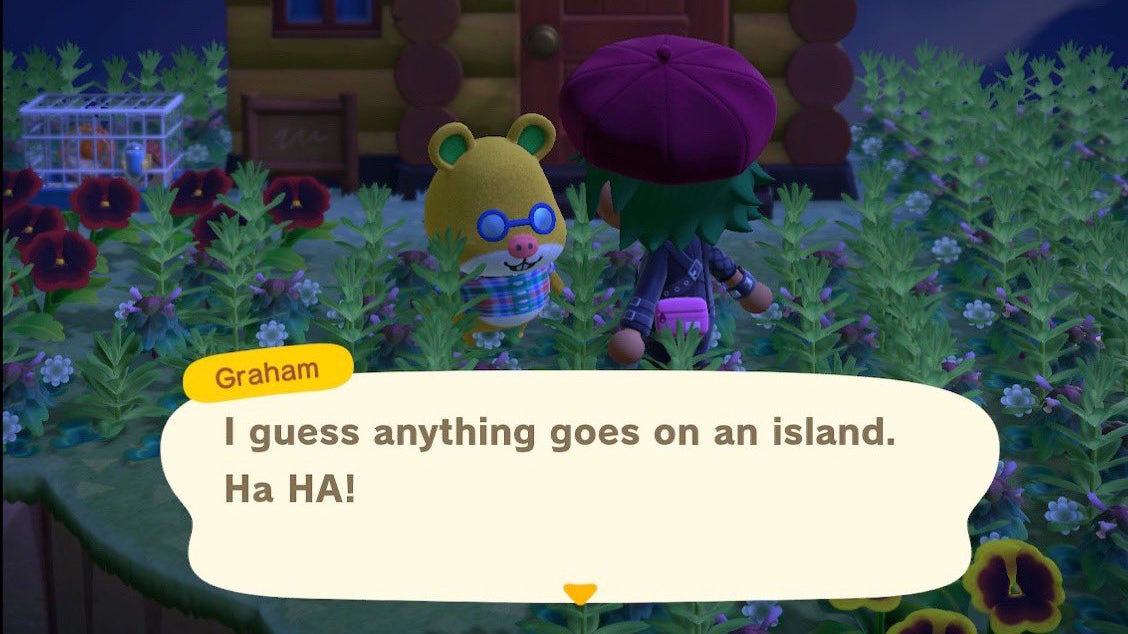 Eventually, Graham did leave, and I rejoiced, but he didn’t leave soon enough and not because of any of the things I tried. Much like the randomness of neighbours moving in, there doesn’t seem to be any rhyme or reason to when villagers decide to leave. As of now, the only definite way to promptly lose a villager is offering residence to an animal visiting your island’s campsite. But unless you’re getting a camper with an Amiibo card (which are currently pretty expensive), there is no surefire way to control which villager your camper will suggest replacing. While a paywall-free way to hasten villager move outs would be nice, trapping them in your elaborate Count of Monte Cristo-esque revenge plots helps to pass the time. 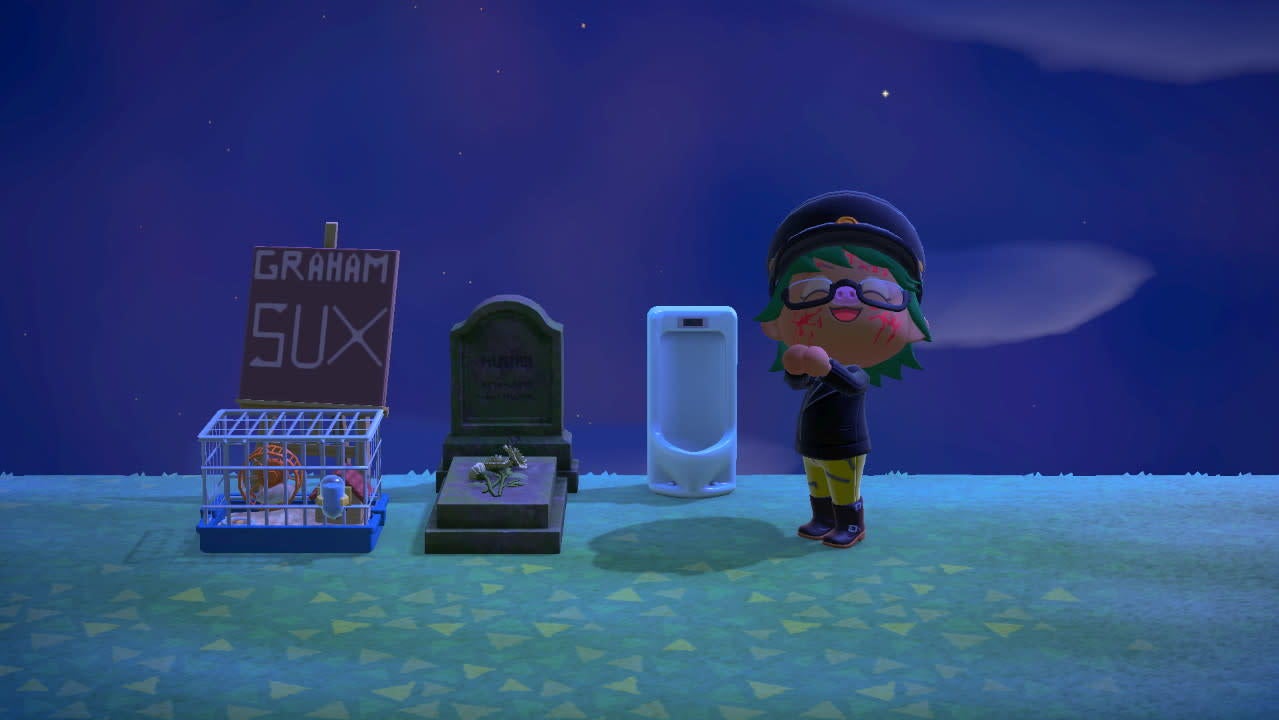