How To Turn Your Smartphone Into A Webcam

You’re maybe using video calling software a heck of a lot more than you were, say, a month ago—and you don’t want to be the only remote worker out there without a video feed to your name. If your home computer setup doesn’t come with a webcam built-in, then you can use the camera on your smartphone to plug the gap.

Before we get on to the software options though, it’s worth talking a little bit about the hardware setup. The good news is that your phone’s camera will have a much better camera than most webcams, but you need to make sure it’s steady—a good mini tripod or at least a thick book acting as a prop can help here.

You can usually choose between the front and back cameras for your webcam, so you obviously want to pick the rear camera on your phone—it’s going to offer the best quality. Finally, if your app of choice gives you the option of connecting via USB rather than wirelessly, it’s a good idea to take it to get the fastest, most stable feed.

Quite a few apps out there will claim to let you turn your phone into a webcam, but we’re not hugely convinced by a lot of them. With so many laptops and all-in-ones coming with webcams built in, and webcams themselves very inexpensive, it’s perhaps not an area that software developers are keen to explore.

We have found a couple of tools that we like, however. The first is the NDI HX Camera app from NewTek—unfortunately, you can only get it for iOS at the moment. An Android version was previously available, and we’re hoping it will return at some point (perhaps by the time you’re reading this). 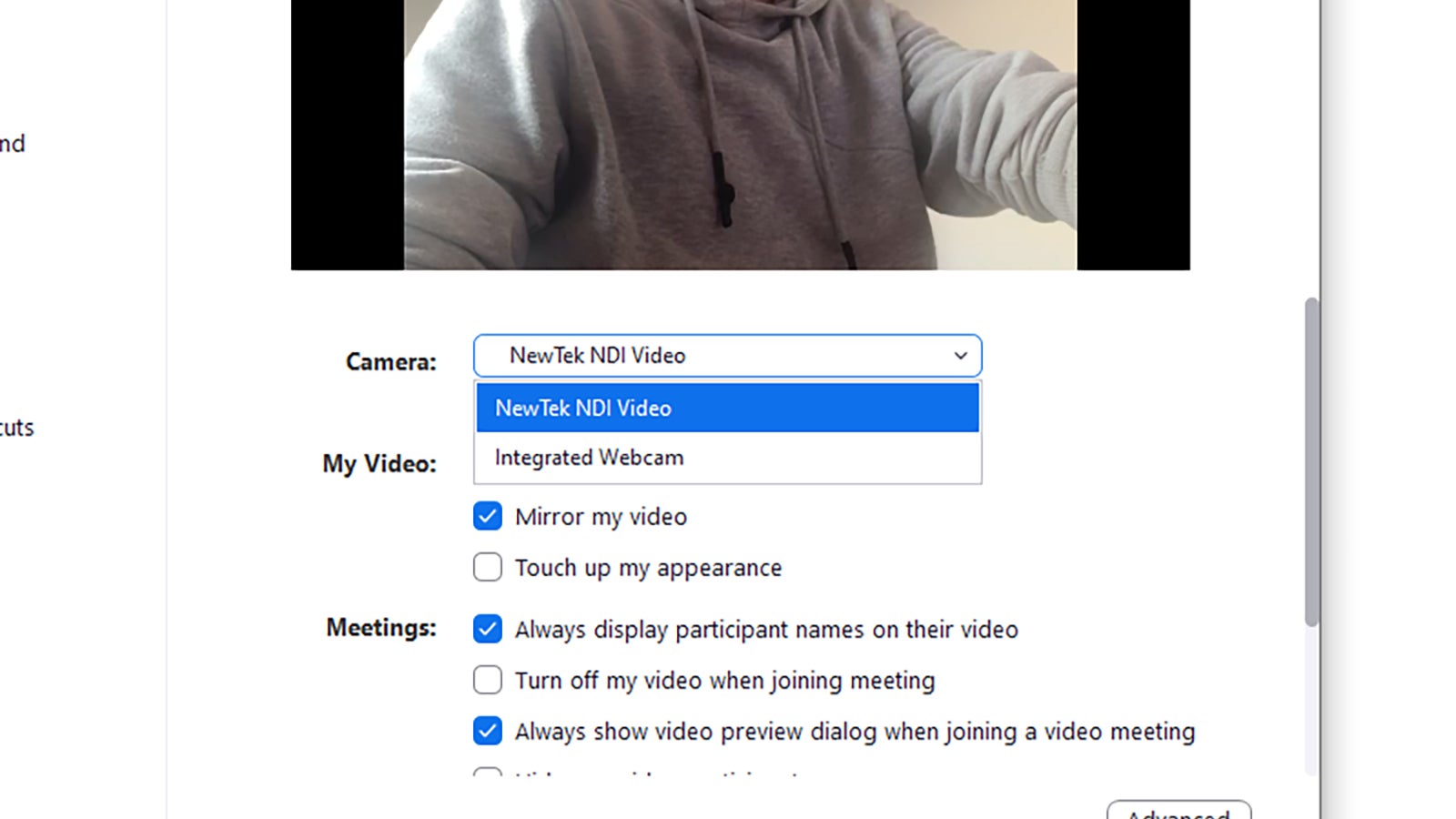 The NDI HX Camera app creates a new feed for your video calling software to latch on to. (Screenshot: Gizmodo)

If you do happen to be using an iPhone with Windows though, setup with the NDI apps couldn’t really be easier: Open the iPhone app, then tap the NDI button to start broadcasting. After you’ve installed NDI Tools for Windows, launch NDI Virtual Input and right-click on its icon in the notification area—the iPhone feed should magically appear as an option, with no further configuration necessary.

All that’s left to do is to launch Zoom, Skype or whatever other software you’re using to make your video calls, and to pick this new NDI camera as your webcam. In Zoom, for example, click the cog icon on the main window, then choose Video and Camera. In Skype, click your avatar, then Settings, Audio & Video, and Camera. No matter what video chat tool you’re using, the option will be lurking somewhere in the video settings.

On your iPhone, tap the cog icon to bring up a selection of settings. From left to right as you hold the phone in landscape mode, they control the zoom, the brightness, the camera flash, the rule-of-thirds grid, the mic mute, which camera is used for the feed (front or rear) and the quality of the video feed.

If you’re wanting to use an Android phone as a webcam, one of the most polished options we’ve found is DroidCam. Again, this only works with Windows, via the desktop client, but setup is simple—launch the Android app and it gives you an IP number that you can type into the Windows client, and you’re up and running. 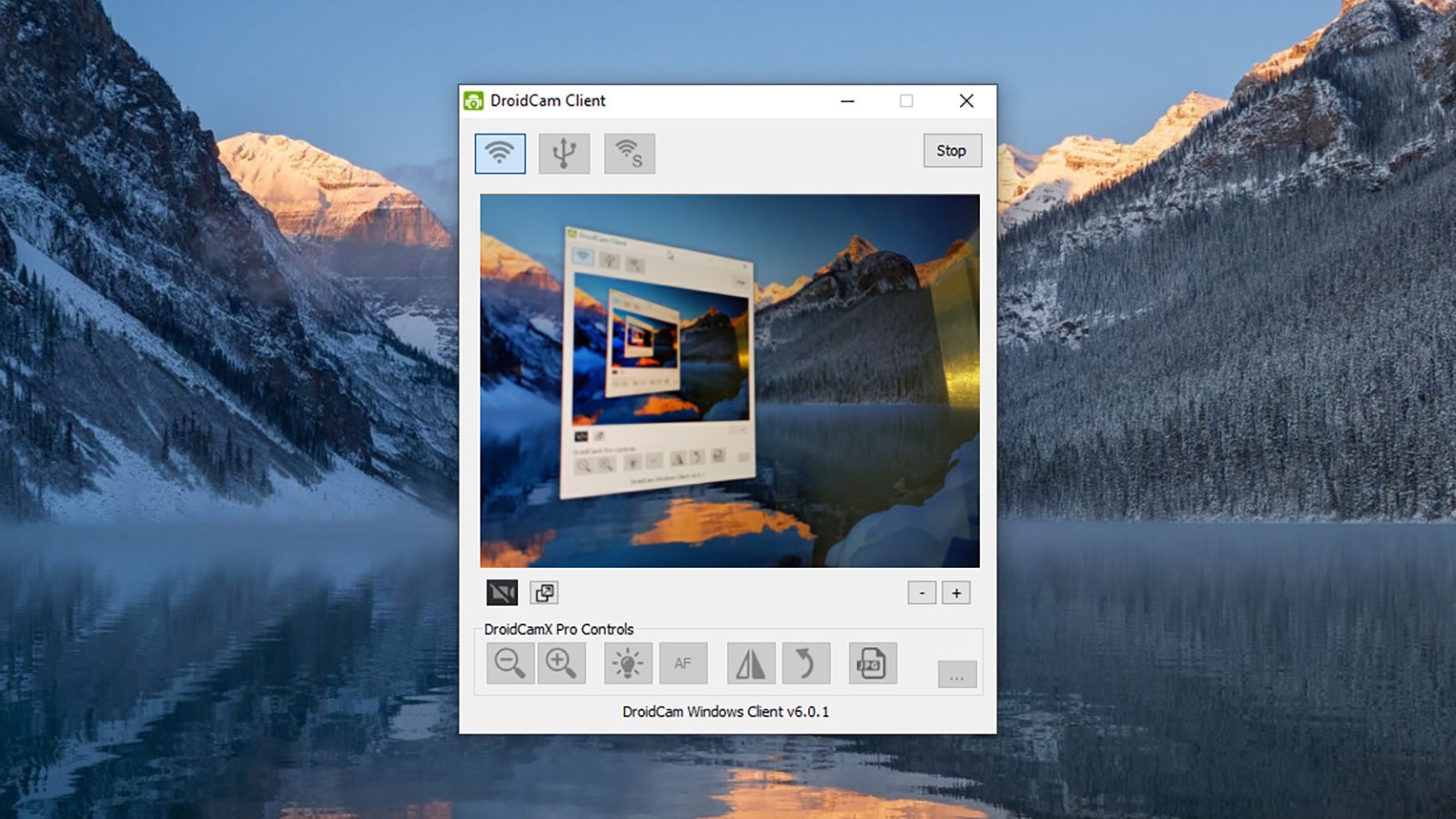 Tap the circular icon on the top right in the Android app to dim the screen while using your phone as a webcam. Tap the three dots just to the right to adjust white balance and exposure (when the feed has stopped you can use Settings on the same menu to limit the frames-per-second sent to your computer and save on battery life).

With the feed running, the camera should become available to all your video chat apps that make use of a webcam. It works fine with Skype and Zoom for example, though we couldn’t get the native Camera app that comes with Windows to recognise it.

Pay $5.99 for the premium version of Droidcam and you can access a few more settings from the Windows side, such as zoom control and the option to flip the video feed to a mirrored view. The free version should be enough for most people’s needs, and we had no problems making use of it, though you do have to put up with a few ads.

We did experiment with a few other apps that are advertised as taking care of this particular task, including iVCam Webcam for Android and iOS, and EpocCam for Android and iOS (which is one of very few apps that promises to work on macOS). None of these other options worked as reliably as NDI HX Camera and DroidCam, though as always your mileage may vary.

The other option is to simply use an app on your phone for video chatting, though this often isn’t as comfortable or as flexible as using a laptop. A lot of video apps have to cut down features and options on mobile as well. But at least it will let your friends, family, and co-workers see your face.