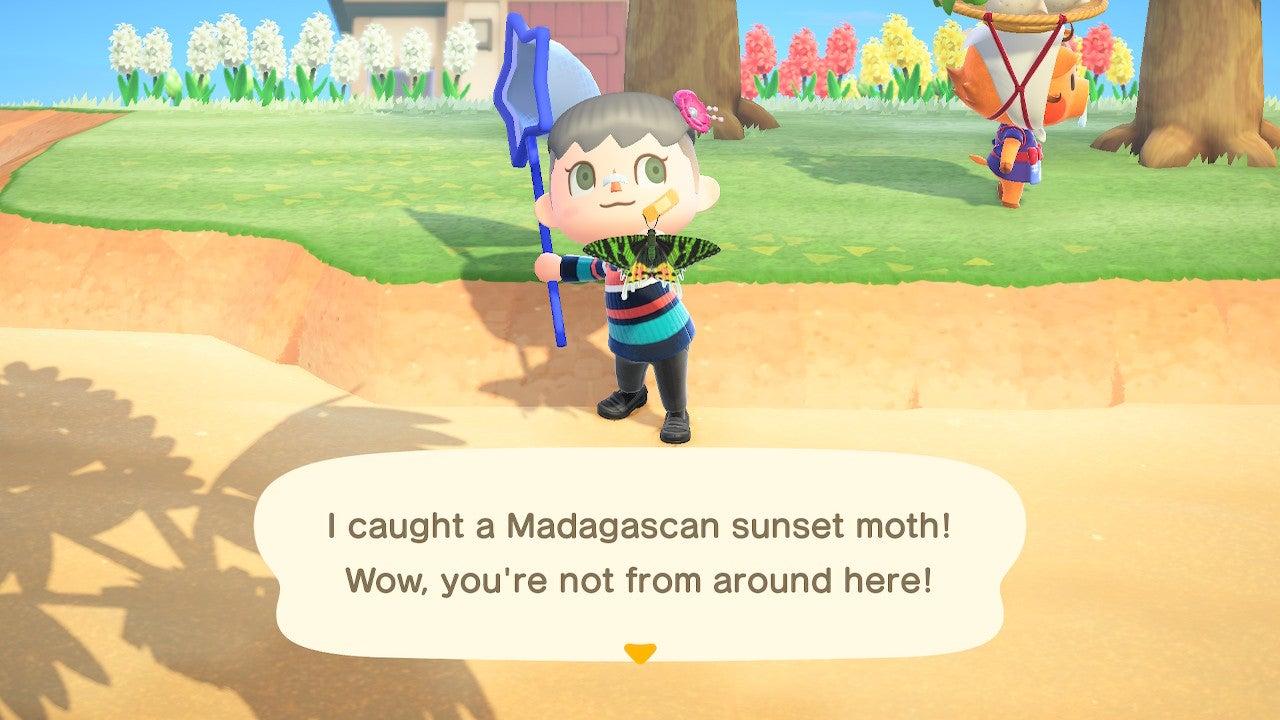 Screenshot: Nintendo, Kotaku
To sign up for our daily newsletter covering the latest news, features and reviews, head HERE. For a running feed of all our stories, follow us on Twitter HERE. Or you can bookmark the Kotaku Australia homepage to visit whenever you need a news fix.

Animal Crossing museum curator Blathers hates bugs. The owl has no problem detailing his disgust whenever you donate a new insect. Blathers’ disdain for bugs has become something of a meme over the last month, but he seems to have a soft spot when it comes to the dazzling Madagascan sunset moth.

Like in previous games, the bugs flitting around your Animal Crossing: New Horizons island will change from month to month. Emperor butterflies, for instance, were plentiful in March but left in April. The tarantula goldmine will dry up as soon as May rolls around. The Madagascan sunset moth arrived on Northern Hemisphere islands this month, and can occasionally be found flying around flowers in the mornings and early afternoons. 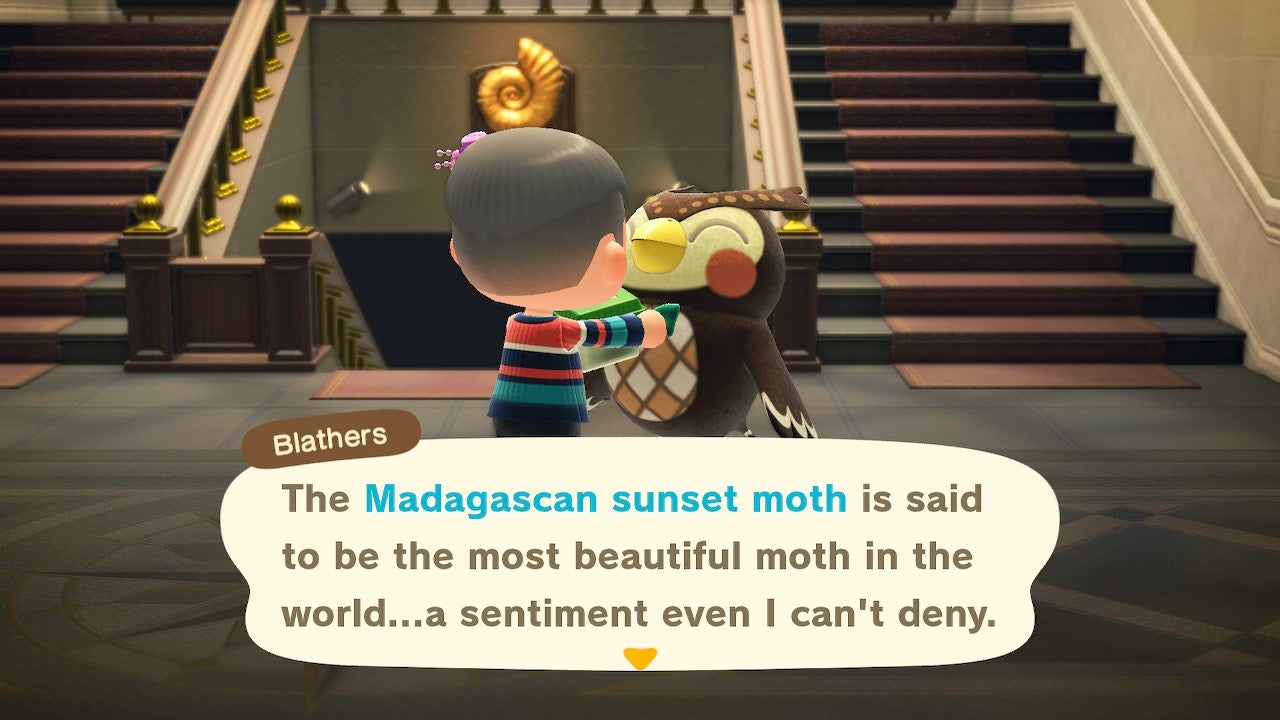 I caught my first Madagascan sunset moth earlier this month and, naturally, ran off to the museum to show Blathers. I take some sick pleasure in watching him squirm. I couldn’t wait to hear his interesting factoids laced with utter revulsion. But that’s not what happened: Blathers wasn’t happy to see an insect, but he had nothing but nice things to say about the Madagascan sunset moth apart from having some weird hang-ups about its larval stage’s red feet.

“The Madagascan sunset moth is said to be the most beautiful moth in the world…a sentiment even I can’t deny,” Blathers explains. “While most moths are nocturnal, this one flutters about during the day, making good use of the light. That is, when the daylight reflects off its wings, a kaleidoscope of colours are revealed! Too bad it has such startling red feet as a caterpillar. I might have found it almost tolerable otherwise. Almost, but not quite.”

Although the Madagascan sunset moth is strikingly large in Animal Crossing: New Horizons, I don’t think the game does its real-world counterpart justice. I didn’t quite get what Blathers saw in it until I looked up photos of the moth in the flesh. It’s a big boy, yes, but what really stands out are its iridescent wings, which change colour depending on angle and lighting. 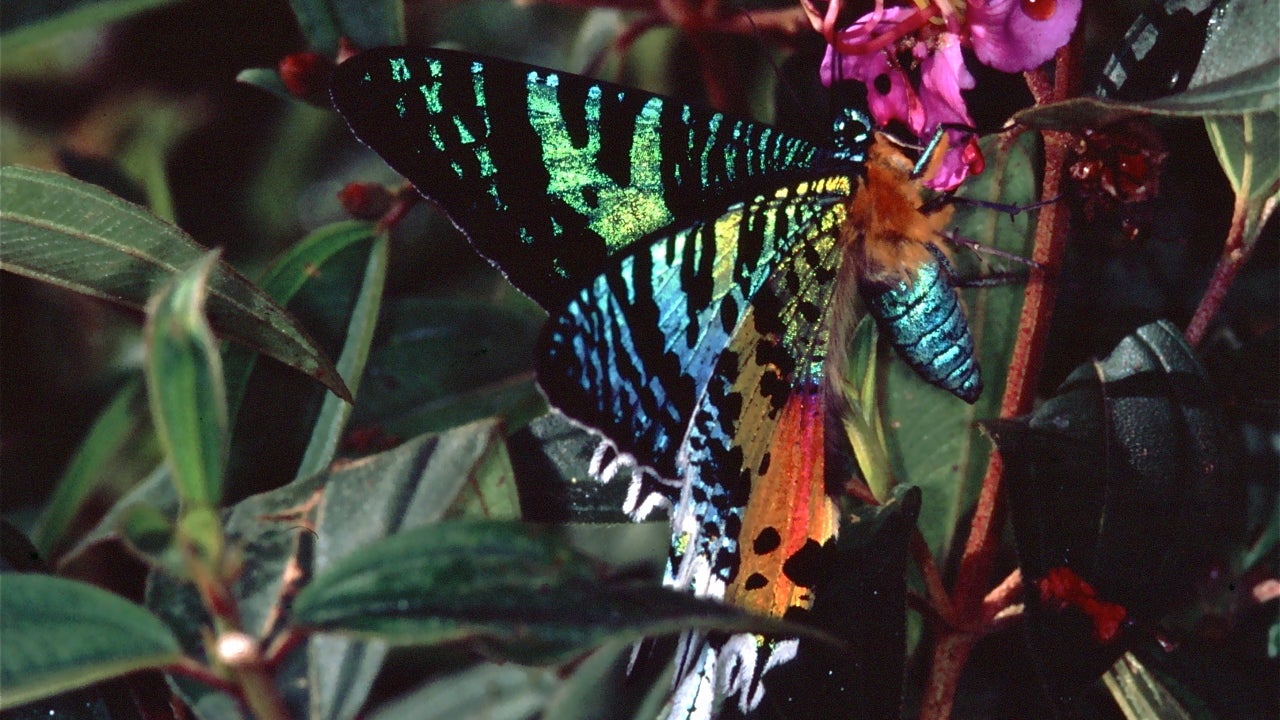 That’s a darn good-looking moth, at least as far as bugs go. It makes sense that this would be the one to break through Blathers’ fear and loathing. We’ve honestly traumatized the owl enough; next time you find a Madgascan sunset moth, swing by the museum and ask him about it. I think he’ll appreciate the gesture.