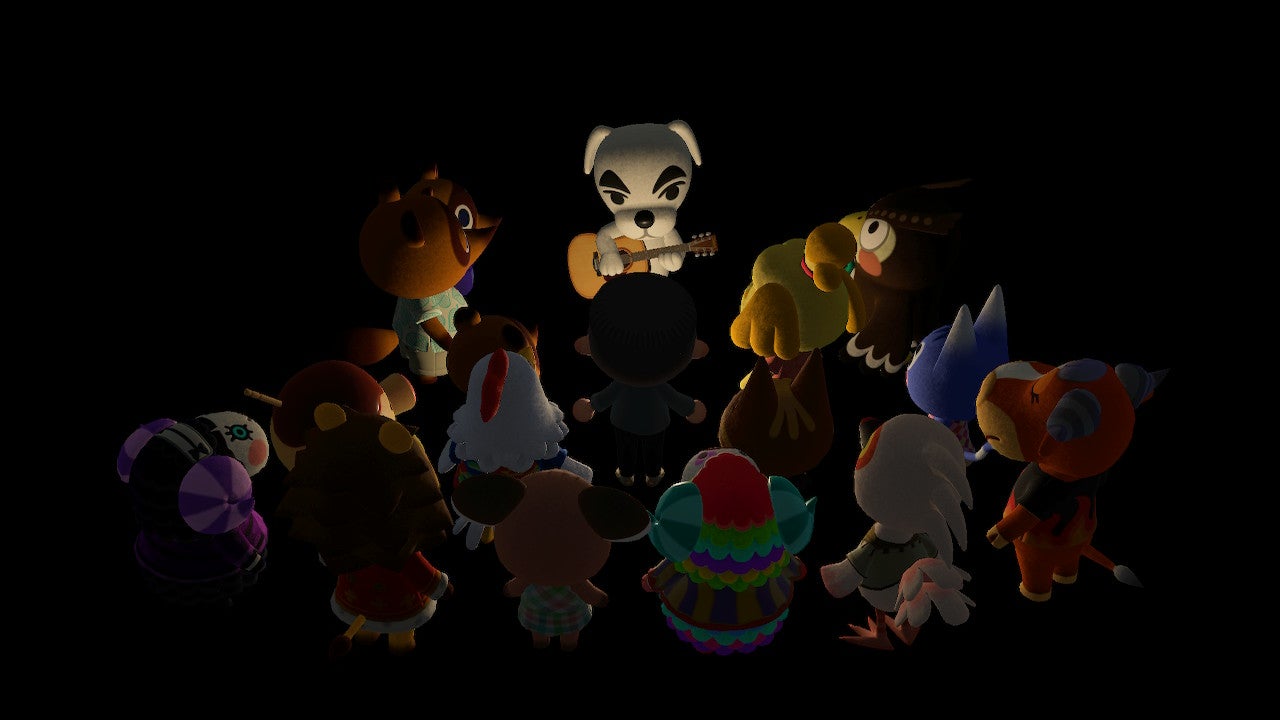 Yesterday, after a couple weeks playing Animal Crossing: New Horizons, K.K. Slider finally made an appearance on my island. But the travelling canine guitarist has apparently become hot shit over the last two decades, so much so that he wouldn’t deign to visit until I took painstaking steps to bring my island up to his specific standards. Just who does this mutt think he is?

K.K. Slider has been something of a mascot for the Animal Crossing series since it first arrived on the Nintendo 64 as Dōbutsu no Mori (or Animal Forest) in 2001. In that game and its revamped 2002 follow-up for the GameCube, he would visit the player’s town on Saturday nights, setting up in front of the train station to play for anyone who showed up to listen.

I found these intimate concerts instantly endearing. I would make it a point to check in with K.K. every weekend to listen to him perform and pick up an aircheck for my home stereo. My favourite, “Two Days Ago,” was a secret track that he would only play by request. The song became such an ear worm that it started to get rotation among my non-gaming music. It’s really something else.

The musician’s star only rose from there. In the next two Animal Crossing games, Wild World and City Folk, K.K. Slider took up residence at The Roost, a café run by the affable pigeon Brewster. This spot was a far cry from playing songs in the rain, but it was still pretty chill. I could almost smell the roasting beans and hear the creaking of the floorboards as K.K. strummed one of his timeless classics.

New Leaf saw a drastic departure for K.K. Slider. He adopted a new persona, DJ KK, spinning wax at Club LOL every night. I’m not so much of a snob that I’ll say this is where he lost his way, but during this time his acoustic music took an obvious backseat to more poppy, electronic versions of his popular songs. That said, if you managed to catch K.K. after his set on Saturdays, he would still make time to sit down for a more traditional concert.

K.K. Slider’s presence in New Horizons is much different. You can purchase his tracks from the outset, showing just how prominent his music has become in the wider Animal Crossing universe. This takes away from what made these airchecks special in previous games. They were treasured, rare objects given to you directly by the musician himself. Now they’re mass-produced and cheap. Rather than staying up late on the weekend to meet K.K., I take a few moments every morning to run to the Nook Terminal and grab the new song, barely paying attention before moving onto my next daily task.

And let’s not forget the hoops K.K. Slider makes you jump through if you want him to make an actual appearance on your New Horizons island. A little while into the game, Tom Nook will come up with the brilliant idea of “improving” the island in order to entice K.K. to visit. The game is still happy to let you curate the island as you see fit, but Nook holds this project over your head by assessing your efforts with a five-star grading system. K.K. will only visit once your island earns a three-star rating, which is only attainable by studying anonymous reviews with Isabelle.

Why is K.K. Slider suddenly so interested in how many flowers and trees my island has? Why is it important to litter the natural landscape with hammocks, benches, and signposts? K.K.’s prior performances were never predicated on what my town looked like or the amenities I could provide. He was simply a travelling performer, a bard wandering the countryside to share his art with whomever would give him the time of day. These performances had heart and soul. They resonated with me as I went about paying off my burdensome home loans throughout the rest of the Animal Crossing series.

That’s not to say K.K. Slider is an empty husk of his former self in New Horizons… far from it. He’s still an incredible performer with a diverse discography. But as my fellow islanders closed their eyes and swayed to his rendition of the New Horizons theme song, I couldn’t get a single, melancholy phrase out of my head: