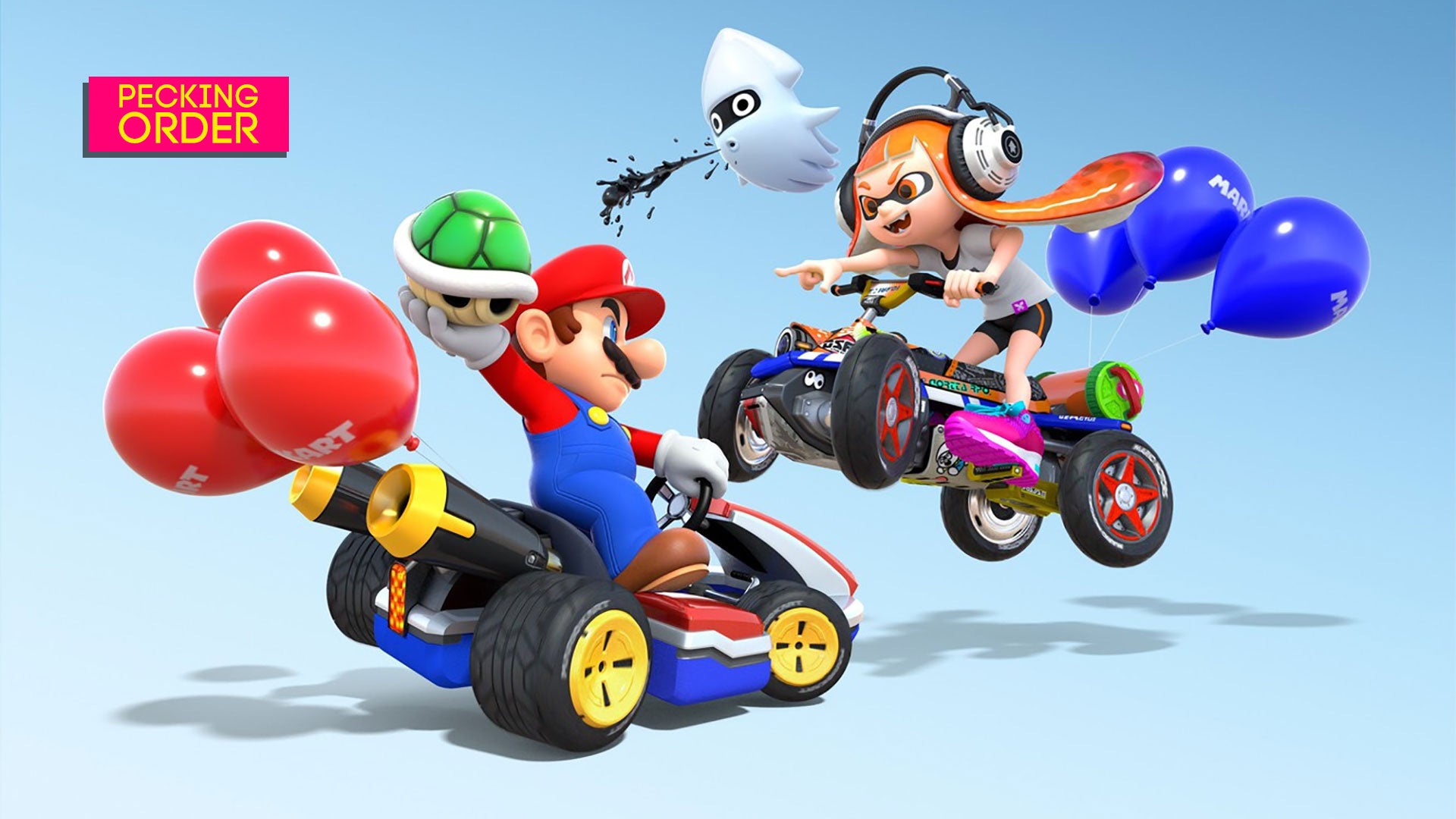 For almost thirty years we’ve been driving like maniacs, questioning the meaning of fairness and ending friendships in Nintendo’s Mario Kart series. So why not end a few more by trying to rank these games from worst to best.

That’s what Pecking Order is for, after all.

The series has evolved over the years, from a simple racer based on the Mushroom Kingdom to a kind of motorised Smash Bros., drawing in racers and tracks from across the Nintendo universe. And as it’s got older it’s got bigger, going from a mere karting game to something that has since let us drive quads, bikes, hovercars and even two-seat mobile weapons platforms.

As is often the case with Pecking Orders, the idea here isn’t really to rank these games from worst to best, because even the ones down the bottom of the listÂ are still loads of fun. It’s to pit these classic against one another, to see not just which one comes out on top, but why.

And spoilers: as these games don’t change too much over the years, course design and new features count for a lot, especially when it comes to multiplayer, meaning that while the list will indeed reflect the idea that “newer games do it better”, it’s far from a procession based solely on a game’s age.

Unlike a previous version of this list from 2014, this time the whole staff has chipped in with opinions, which means it is 100% correct, definitive and we will be accepting no dissenting opinions on the matter.

Note: we’ve excluded the arcade games on two grounds, one that loads of us (and you) haven’t played them, and also because so much of their content, from tracks to sound effects, is recycled content from mainline games (in a more literal way than newer console games including older tracks). 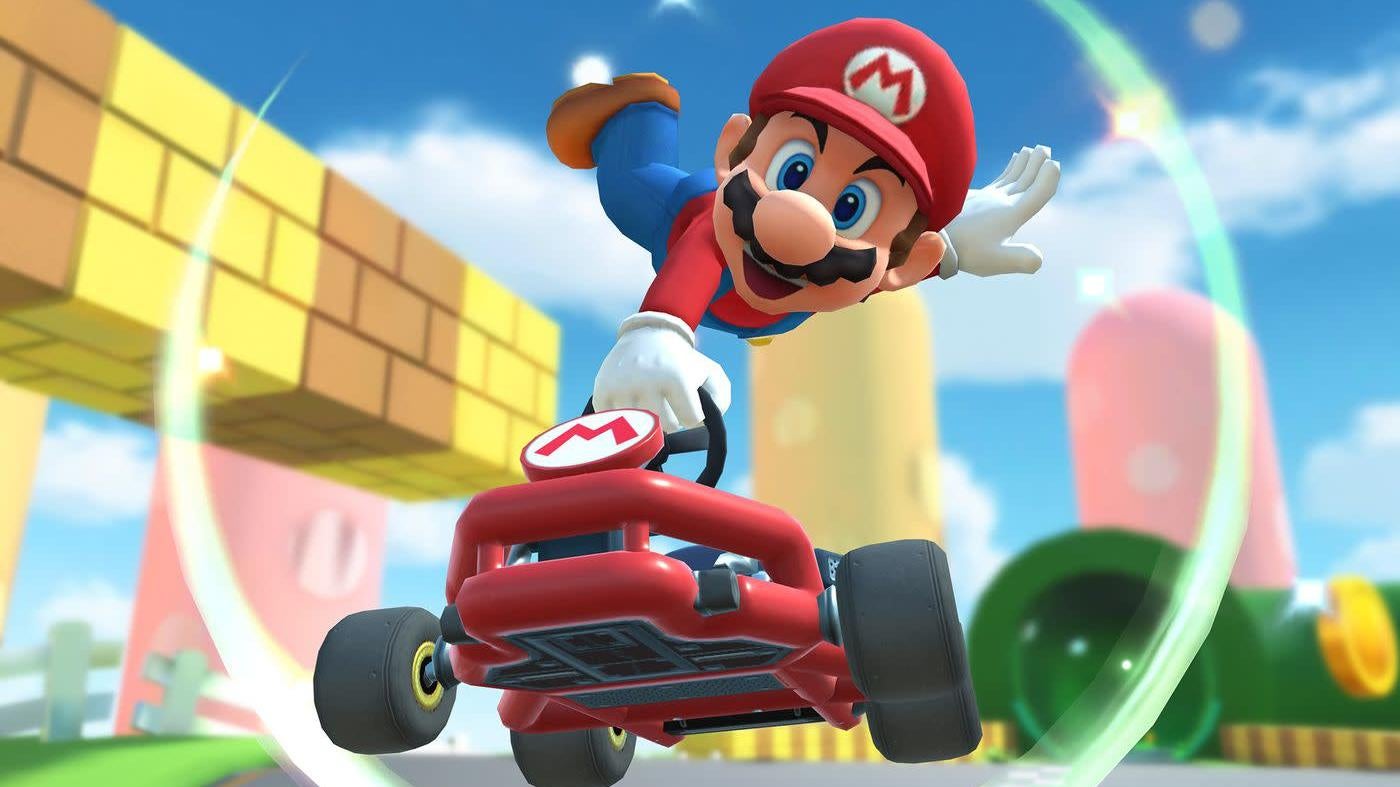 We’ve got to start somewhere, and this is easiest place. Concessions had to be made to make the game work on mobile in an economic sense, we get that. You can’t release a phone game in the last decade without tying it to some kind of bizarre money-making scheme.

But the game itself could have been so much better. Emulation of classic Nintendo games is at the point where many people could play Double Dash on their phones if they wanted to, so to offer up such a compromised version of the series as an official release is a crushing disappointment.

By the standards of 2019 mobile game releases, it’s fine? But by the standards set by the rest of this series, Mario Kart Tour is a comfortable last-place finish, no red shell required. 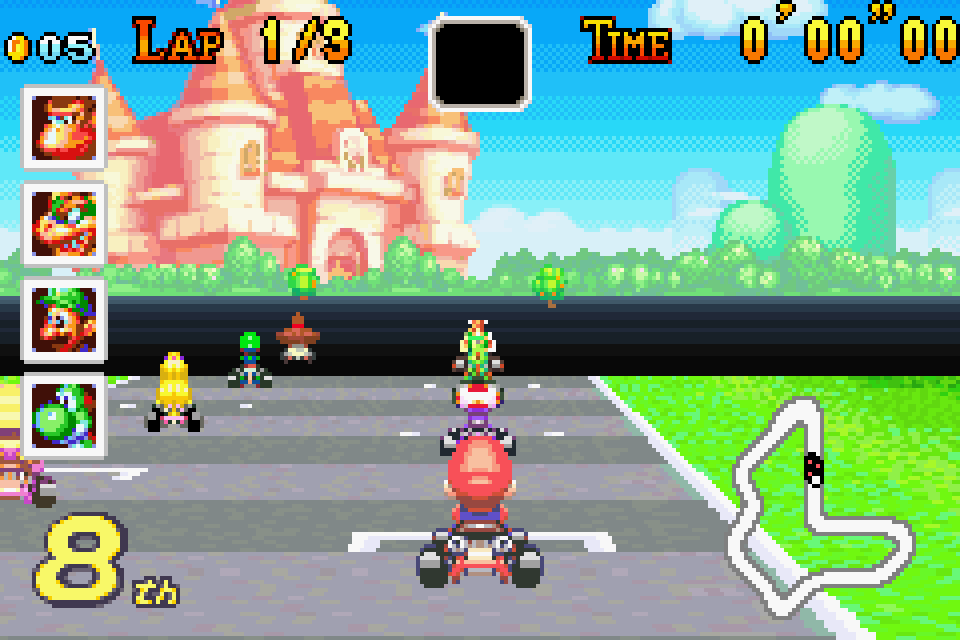 It’s many people’s least favourite (at least proper) Mario Kart game because it’s both so old and there’s so little to recommend it. The original has the purity of its vision and nostalgia to play on, while later games are just, well, better. Super Circuit, caught between the original’s pioneering release and releasing long after the series’ 3D debut, is trapped and a little lost, at least when we’re looking back on the series as a whole from our contemporary vantage point.

Know what’s really cool about it though? The original’s visuals haven’t aged that great, but Super Circuit’s cheery pixel art is one of the Game Boy Advance’s most underrated achievements. Everything is just so damn colourful and cute and pretty in the same way so many first-party SNES and GBA platformers were, only here it’s moving real real fast as well. 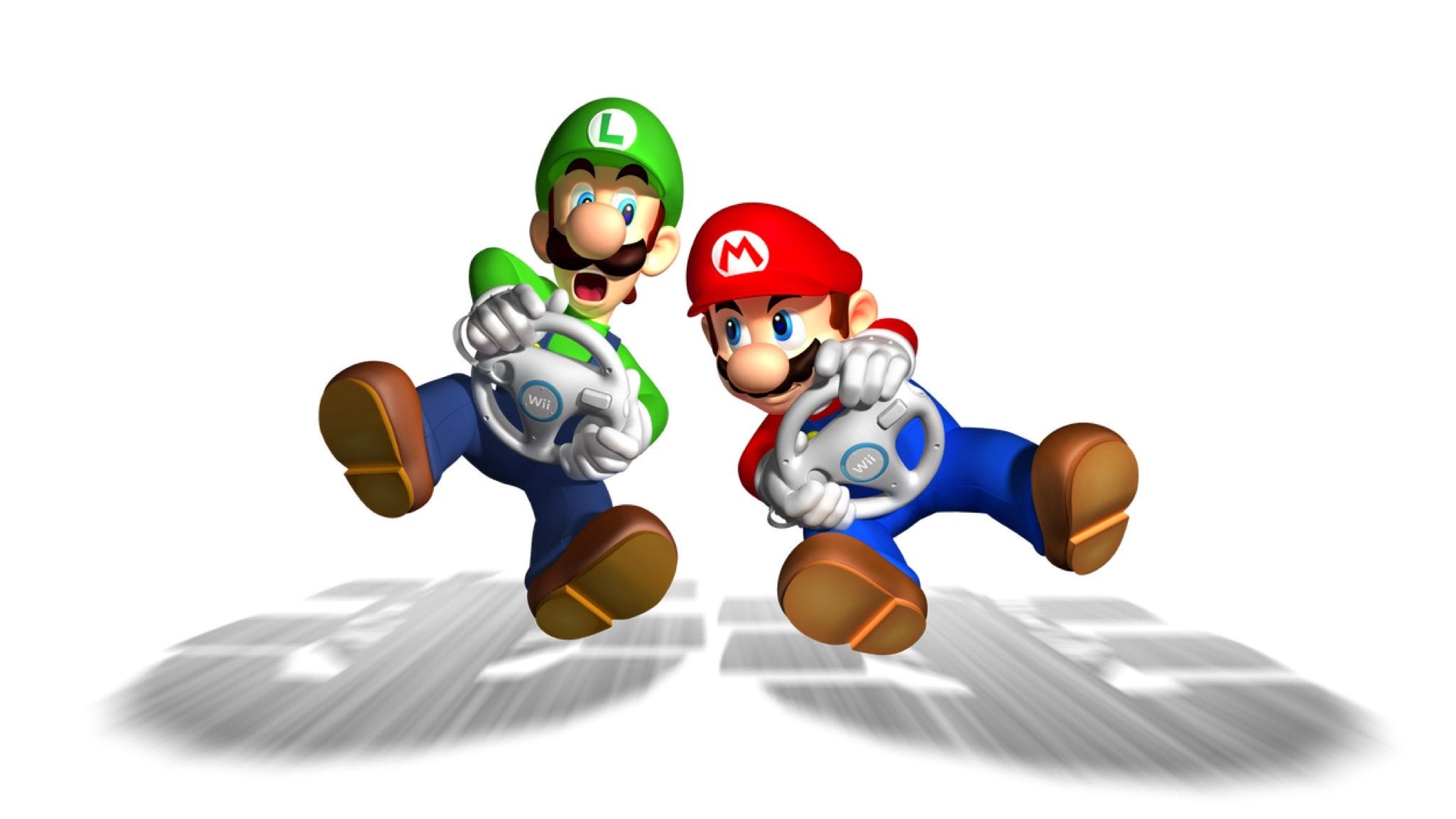 This game was so damn popular! It sold 37 million copies! And you’d think, from the size of it to the funky motion controls, that it’d be higher up on this list. But again, like Super Circuit, Wii gets a little lost in the passage of time, as there’s very little reason to play this when Mario Kart 7, and then 8, came along and did everything it did but so much better.

Not helping it here is that, despite the game being perfectly positioned to cash in on the Wii’s motion control hype with its iconic plastic steering wheel, the game’s motion controls”the one defining feature of the game that anyone remembers”were actually straight garbage. 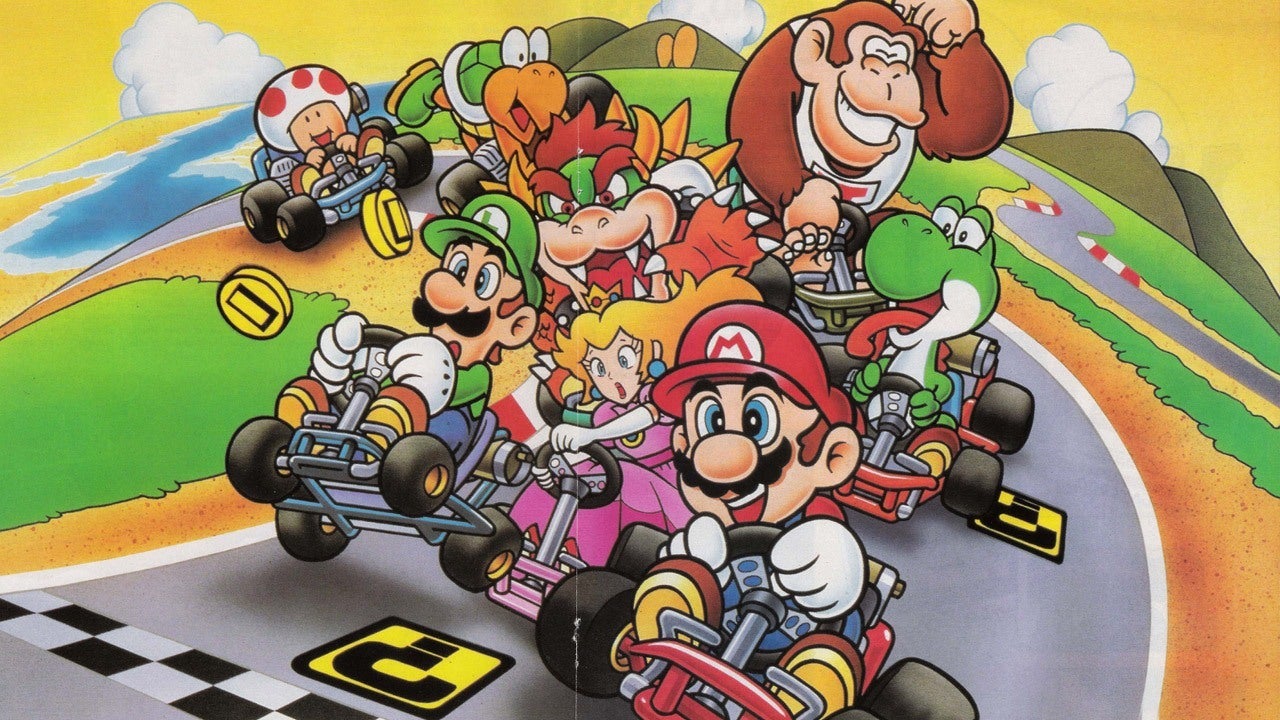 In many ways the most limited mainline Mario Kart game, this could have been down the bottom of this list after all these years, as subsequent games have some along and slowly improved and built upon the foundations it laid.

But man, there’s still so much to love, and respect. While its lack of 3D terrain is a little jarring in this post-Nintendo 64 world, the slippery, slidey cornering might still be the best in the series, from its exaggerated reach to the way the entire camera is wrenched around to accommodate it.

It’s not the fastest, smartest of even the most fun Mario Kart game, not by a long stretch, but it’s somehow still the most kart-y game of the lot. And being the instigator of the entire series, in many ways the purest expression of the original vision, it felt wrong putting it any lower. 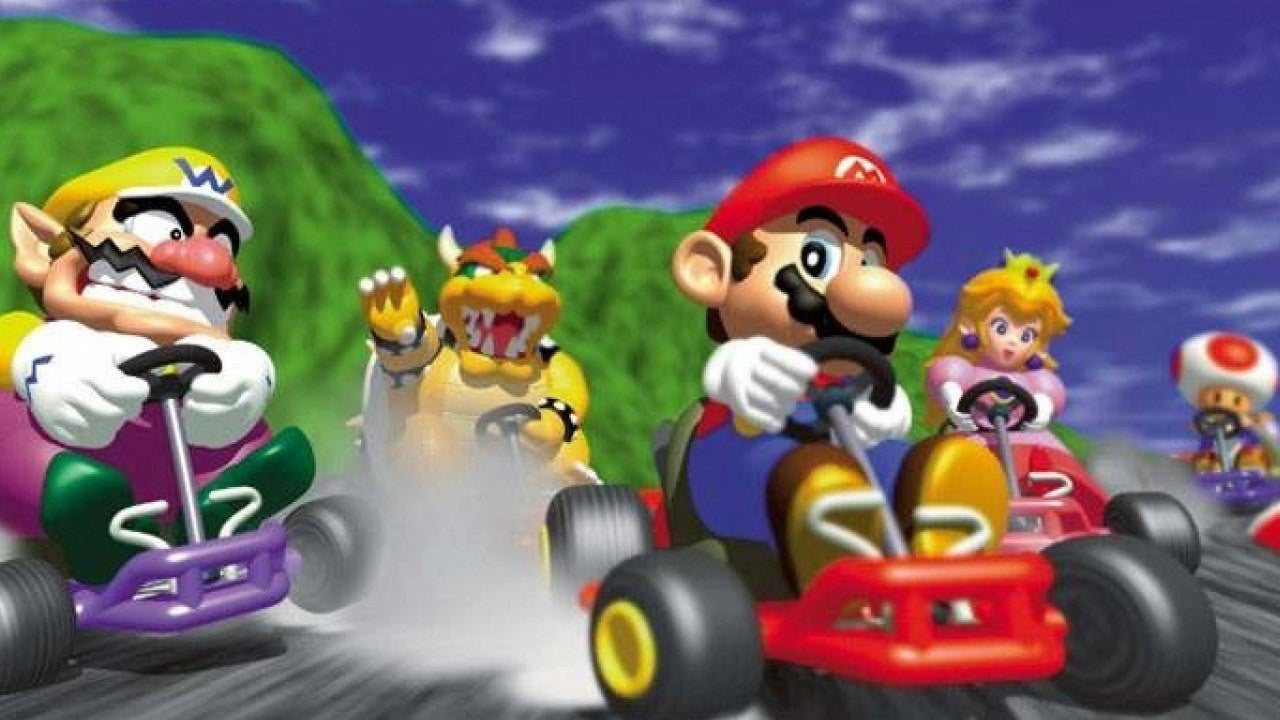 This is going to start harsh for a game that’s a lot of people’s sentimental fave, but time has not been kind to this game. Where once it was a pioneer of 3D multiplayer gaming, now it just looks like shit and has a surprisingly high number of empty, boring tracks.

As we’re going to find as we get further into this list, though, even the weakest Mario Kart games (by 21st century standards, anyway) can often be saved by moments of inspirational course design, and while like I’ve just said many ofÂ Mario Kart 64’s are a snooze fest, when it shines”like Toad’s Turnpike”it shines.

Also, this is the game that introduced the blue shell. We weren’t sure whether to praise or punish the game for that, so in very un-blue shell fashion it ends up dropping it in the middle of the pack. 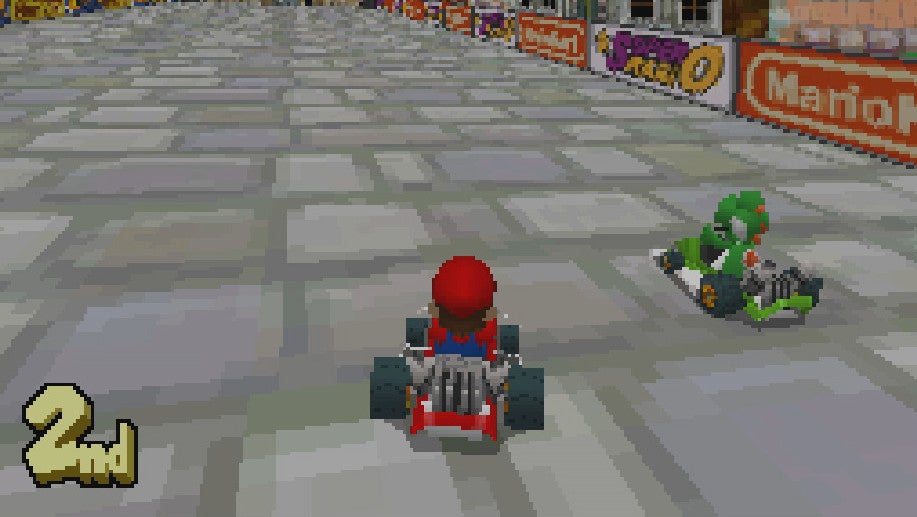 There’s a pattern emerging here, born of the series taking relatively few major advances over the years: this is yet another entry that was ridiculously popular, and another where there isn’t much reason to play it today, coming as it did between everyone’s childhood favourites and the more expansive offerings on the Wii U and Switch.

But can we just take a step back and appreciate its online play? This was a DS game, from 2005, made by Nintendo, and to play it online was both a breeze and an absolute joy.

Mario Kart DS was the first game in the series to open us up to a whole world, quite literally, of Mario Kart in a way that not even some more recent home console titles have managed. 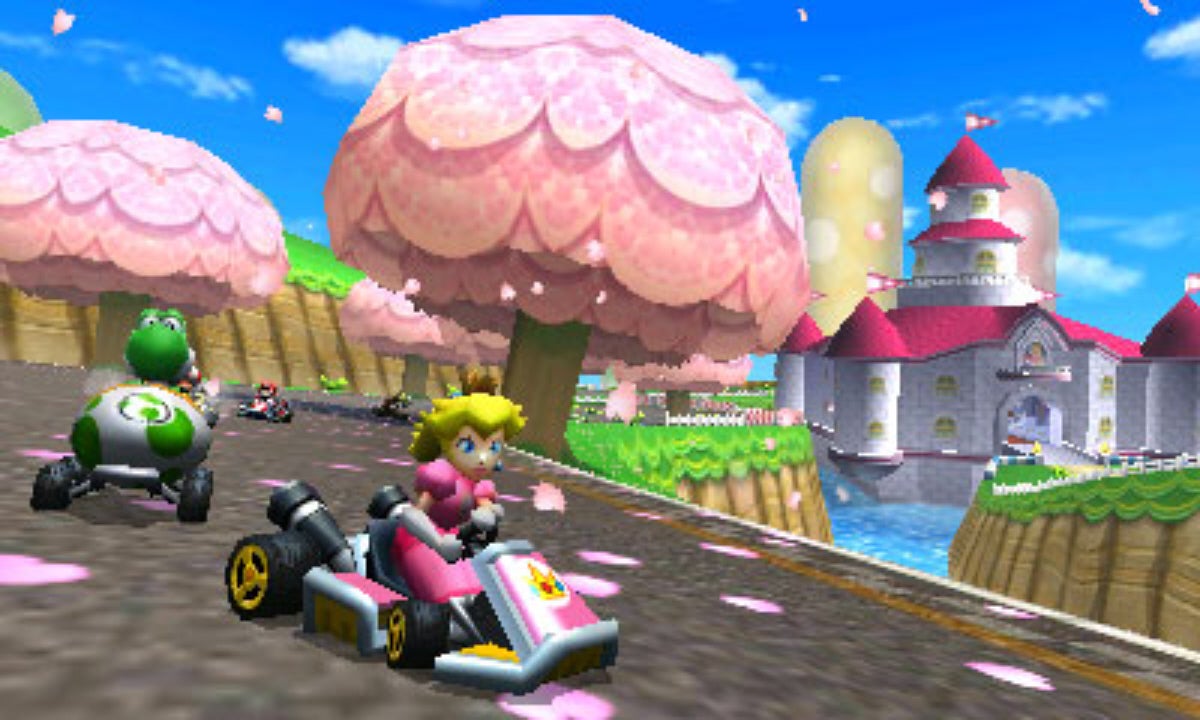 Can we just start this one by saying that more Mario Karts (outside of VR experiences) need first-person racing? This game had it, and it sucks that more don’t!

Anyway, Mario Kart 7 had a lot more to offer than just that gimmick. Mario Kart 7 made some big innovations for a handheld game, most importantly in the way players were now able to drastically customise their cars, and also how you could drive underwater.

The game is often criticised for leaning a little heavily on the rest of the Mario Kart formula (as if every game barring 64 hasn’t done the same thing), but that was always a little unfair, coming as it did on a handheld system whose primary innovation”3D visuals”could never really be taken advantage of in a way that could have fundamentally changed the Mario Kart experience.

Indeed, for a game that at the time felt a little derivative, its introductions ultimately paved the way for a lot of the stuff that Mario Kart 8“which you’ll note we haven’t got to yet”does so well. 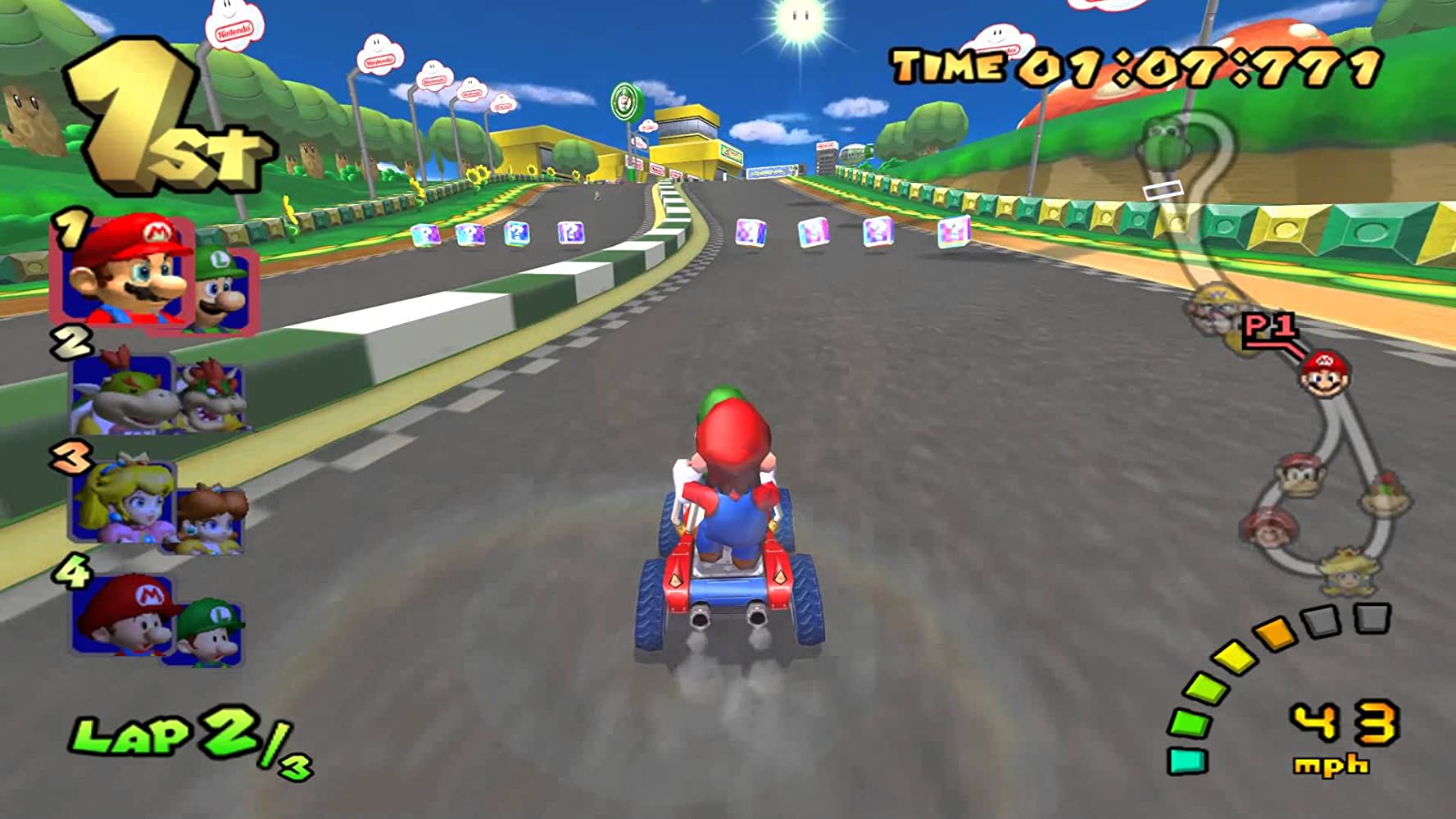 Firstly, the two-player thing was great, and it’s a shame it hasn’t returned (outside of an arcade cameo) since, even as a secondary mode. Having one player concentrate on driving while the other handled the timing and direction of weapons might not have been ideal in every multiplayer circumstance, but when it did”whether your partner was less skilled than you or just wasted”it was glorious.

And secondly, as you’d expect from a game coming out on the GameCube, Double Dash’s course design is some of the wackiest”and thus best”of the series. From Baby Park through to DK Mountain, it’s not until you cycle through some of these tracks again in later Mario Karts that you realise so many of the absolute classics are from this one release.

But its GameCube-ness extends beyond just the course design (and its killer soundtrack!). This is just so much fun, one of the shining examples of the weirdness prevalent in Nintendo games throughout the GameCube’s lifespan, where it was able to build on its cutesy past and polish it into a mirror-like sheen, but wasn’t yet having to run commercial tie-ins for Mercedes DLC. 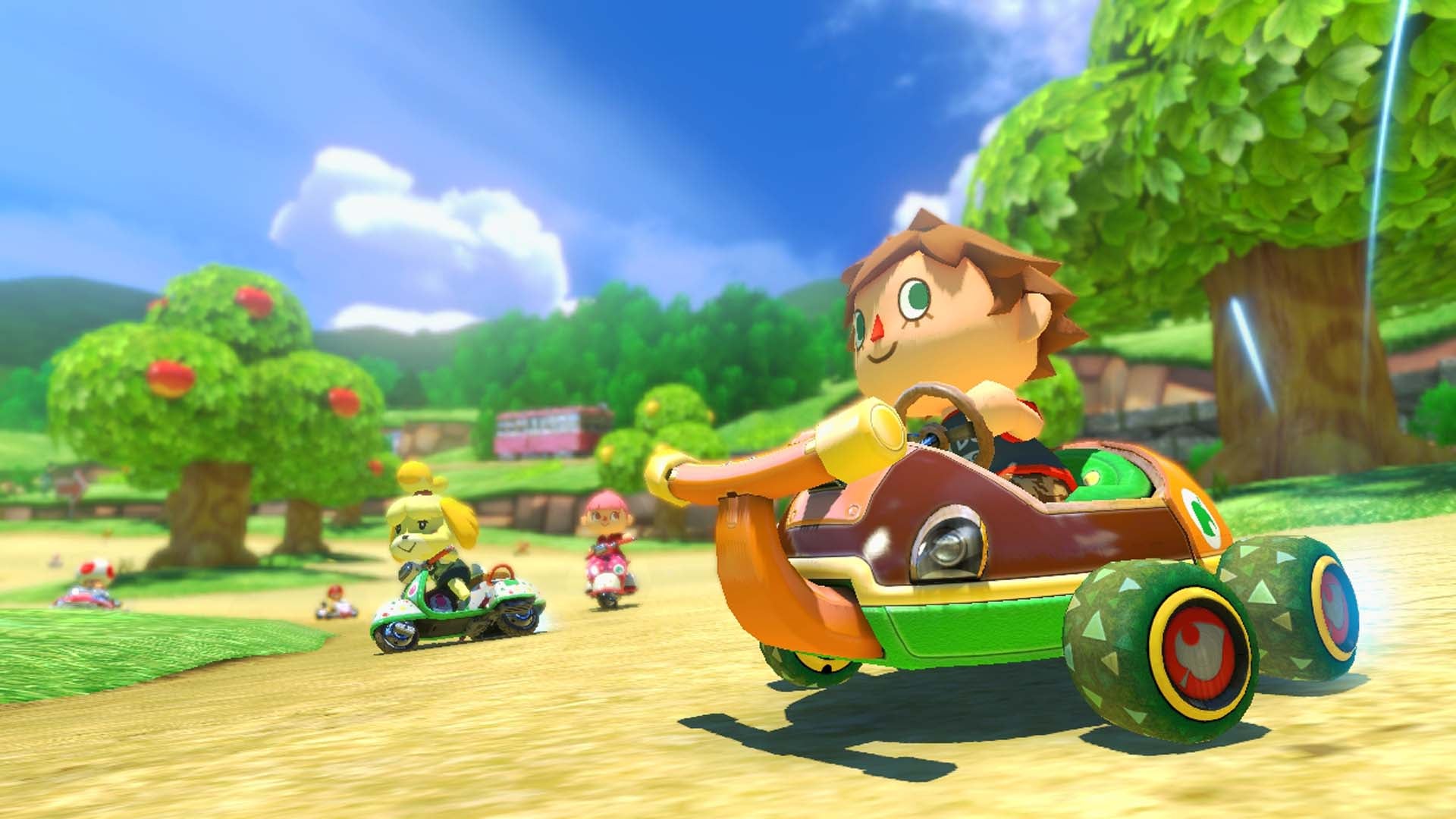 Can you believe Mario Kart 8 came out six years ago? That’s a mighty long and uninterrupted reign for a Mario Kart game when you look at the release timeframe of so many of the games before this, but really, Nintendo hasn’t had to replace it, and might not need to for a while yet. An upgraded version on the Switch and some DLC has been enough to keep this one of the finest ever games, Mario Kart or otherwise.

Everything we’ve discussed previously on this list, from characters to courses, is done better here than anywhere else. It’s innovations are rare, but its perfections are everywhere, particularly in its course design, which features truly breathtaking moments as gravity is inverted, whole sections of track disappear and coins are turned into rupees.

Quite simply, if you want to play Mario Kart, online or solo, with traditional characters or newer introductions, classic tracks or modern masterpieces, this is the game to play.