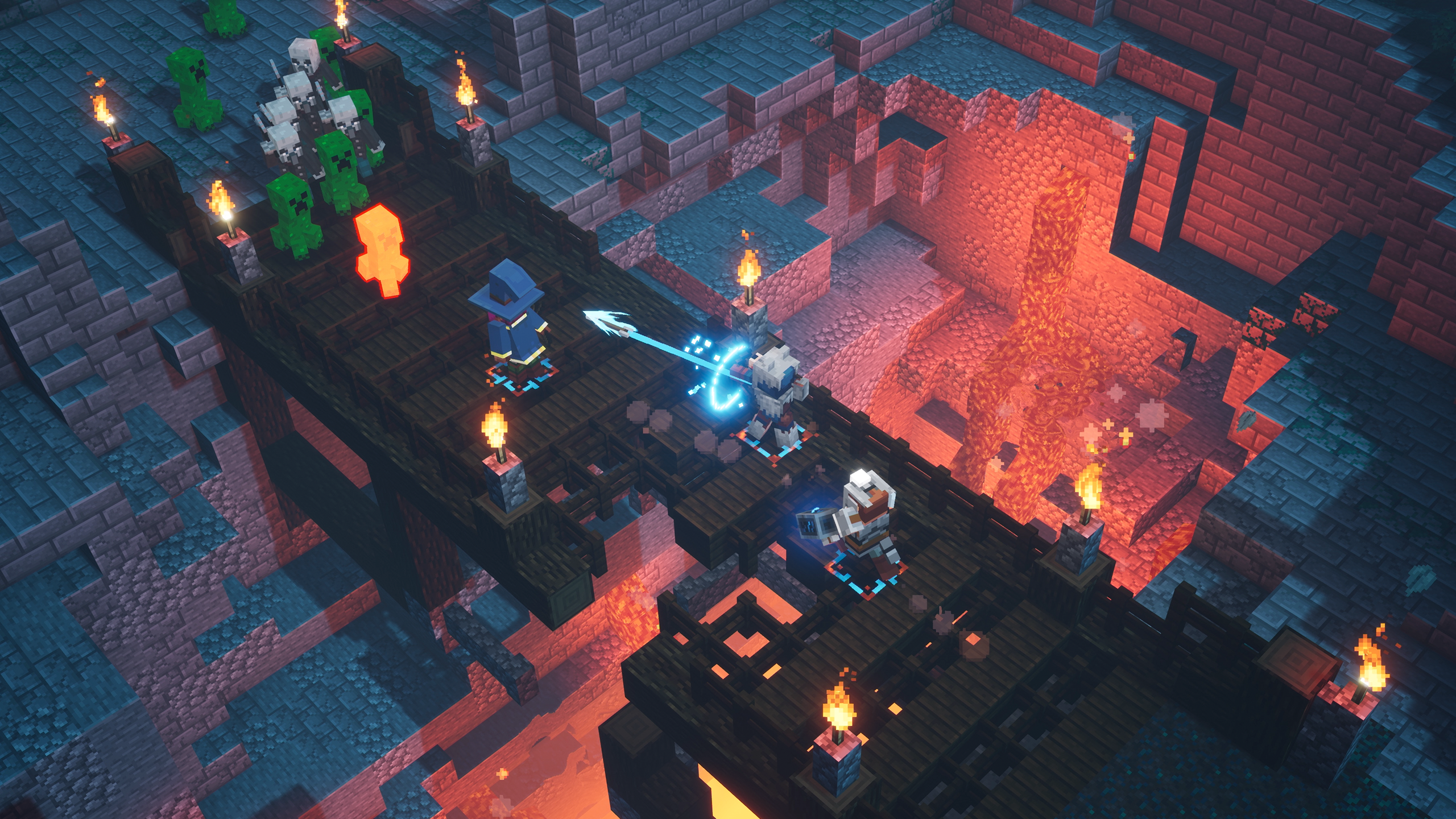 Minecraft’s transformation from an open-world crafting game into a linear dungeon crawler is an odd one, but Minecraft Dungeons is still shaping up to be a serenely welcoming loot-based hack n’ slash.

Mojang demoed the game for me remotely last week due to the new work-from-home constraints imposed by the ongoing covid-19 crisis. These constraints have also led the game’s release on Xbox One, PC, PS4, and Switch to be delayed until next month. Still, what I saw and subsequently played in the current closed beta looked promising, if a bit more straightforward and down-to-earth than the seemingly limitless adventures we’ve come to associate with the source material.

What stood out to me the most during my time with the game was just how pretty and inviting its voxel-based world felt. Minecraft’s muddy, late-2000s aesthetic is basic but not retro, while Minecraft Dungeons looks and feels more like a block-based Gauntlet you might burn through quarters playing for hours in the arcade. There’s a familiar pattern to slashing through mobs of enemies, while the ambient and surprisingly excellent soundtrack helps transport you into whatever mystical forest, volcanic cave, or castle wall you’re exploring. Together with Mojang’s developers quietly explaining the game, my preview of Minecraft Dungeons turned into an unexpectedly therapeutic ASMR let’s play following several weeks of lockdown during the ongoing pandemic.

While Minecraft Dungeons looks like Minecraft if shoved through an isometric point-of-view, in playing it I found it’s actually more akin to Diablo with a strong “baby’s first dungeon crawler” vibe. You’re funneled through a level that occasionally has branching paths, one of which will lead to loot while the other eventually reveals itself to be the critical path, on which you bash enemies and beat mini-bosses along the way until you clear every objective. At the end, you’re rewarded with a random chest full of extra loot based on the difficulty of the level. Then it’s back to a small village hub area where you can swap loadouts before heading back out to clear another level, kill more stuff, and hopefully acquire even more powerful gear.

There’s no building and the environments aren’t destructible, which are the elements you might expect to define a Minecraft spin-off. Mojang says that’s by design. “This was a conscious design choice, as we wanted to offer an experience that differs from the Minecraft survival mode, and plays a little more like adventure maps play in Minecraft,” David Nisshagen, the game’s executive producer, told Kotaku in an email. “We wanted to focus on the adventure and exploration themes in Minecraft, and that also means we focused on the combat. There is an element of creativity in how you build your character, though, and the many various combinations of equipment and enchantments you use at any given time.”

You can make as many of these characters as you want, and while there’s no creator to customise their appearance beyond the available dozen or so presets, every piece of equipment you pick up will change how your character looks and plays. Minecraft Dungeons doesn’t have races or classes, and instead lets you construct your own based on the weapons, armour, and artifacts you find and what random bonuses you choose when you level up. The freedom to mix and match stuff like this feels chaotic, but also has the potential to result in unusual and overpowered builds like you might find in a dungeon-crawling roguelike. In a lot of ways though, Minecraft Dungeons seems like a more traditional adventure game. There’s a guiding narrative stitching each mission together about needing to save a bunch of villagers from an outcast villager who got hold of an evil power source and is now using it to get revenge. Mojang says playing through this story will take about five hours. The rest of the game will revolve around exploring alternative paths in levels and replaying them on harder difficulties with the benefit of procedurally generated parts that will hopefully change up how you fight each time. Two story-based DLC expansions are currently planned, but otherwise there’s no in-game microtransaction shop or season pass in the works. While every other online multiplayer game seems to have evolved into a game-as-a-service, Minecraft Dungeons is apparently taking a more old school approach.

There will of course still be free post-launch updates, at least one of which is supposed to contain the game’s cross-play functionality. When it first comes out on May 26, Minecraft Dungeons will allow up to four-person couch or online co-op, but only with people on the same platform. Mojang announced last week that full cross-play will come sometime after release in the “near future.” The game also won’t allow you to mix local and online co-op. Play locally and you’ll have to play offline, although Mojang told Kotaku that that could also change in the future based on player feedback.

It’s clear that Minecraft Dungeons is meant to be a family game. One of Mojang’s developers often made references to play with his child during the demo I saw. While part of that can be interpreted as a simplifying-down of the Diablo formula, the larger part seems to be a way of bridging the generational gap between parents who spent years grinding for loot in dark caves and kids well acquainted with bashing blocky-faced Creepers with their blocky swords. We’ll know soon enough whether Minecraft Dungeons, bereft of base-Minecraft’s player-freedom and the deeper strategy elements of old CRPGs, has enough there to bridge the gap successfully.