This post has been retimed as a reminder to everyone to play any board game other than Monopoly, no matter how funny the spin-offs are. 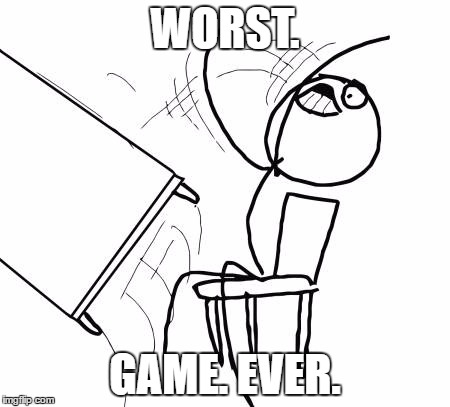 You’ve had this experience. You play Monopoly, and inevitably one person is eliminated after about 45 minutes. They sit around twiddling their thumbs for another half an hour, hoping for someone else to be eliminated so they can have a quick game of something on the side. Meanwhile, the last two players are still playing after 3 hours, exhibiting sheer bloody-mindedness, as one player slowly gains the upper hand, and one player sits around hoping to be a David against a monopolistic Goliath. The end of the game is a long, drawn out, unpleasant affair.

Compare that to Sid Sackson’s 1964 classic, Acquire (still in print). Everyone starts with $6000, and will end the game with $20,000-60,000 in value. Everyone wins, everyone grows their portfolio and net wealth, and the winner is the one who grows their companies faster and best. Or Settlers of Catan (1995), where everyone ends with an empire of towns and cities and roads. Or the 2008 Spiel Preis winner, Agricola, where the person with the best farm wins, but everyone develops their plot of lands from subsistence farming to a working farm with grain and vegetables and sheep and pigs. Or Ted Alspach’s Simcity-esque Suburbia (2012), where everyone builds up their suburb into something living, breathing and unique. Or basically 99% of modern board games with good game design. You may not win, but you have accomplished something, and that in itself is satisfying. It’s a far more pleasant experience than having your property portfolio slowly dismembered, piece by piece, until all you have is Water Works, and Free Parking.

Monopoly has been superseded a thousand times over. It wasn’t even cutting-edge in 1933, due to Charles Darrow’s plagarism from a little game called The Landlord’s Game. In 2017, there are thousand better options, and a thousand games that are better designed, and when it comes down to it, more fun.