The Final Days Of Japan’s Most Incredible Arcade

Japan is known for its video arcades, from the tiniest little collections of claw games in basements to entire high-rise buildings packed with floor after floor of video amusements. On Sunday, November 17, perhaps the most elaborately themed arcade in the country, Anata no Warehouse in Kawasaki, shut down for reasons that remain unexplained.

This article was originally published on November 15, 2019.

The five-story mega-arcade was the brainchild of Taishiro Hoshino, a set designer for kabuki theatre, who opened it in 2019. Far from a simple collection of games, Anata no Warehouse (“Your Warehouse”) was a recreation of the Kowloon Walled City in Hong Kong’s New Territories, a gravity-defying mega-slum that had captured the world’s imagination until it was torn down in 1993.

The Walled City began as a Chinese military outpost to protect trade shipments, and over the years, morphed into a squatters’ haven. Many incoming residents had been displaced by war or the Communist revolution, while others craved freedom from Chinese and British interference. 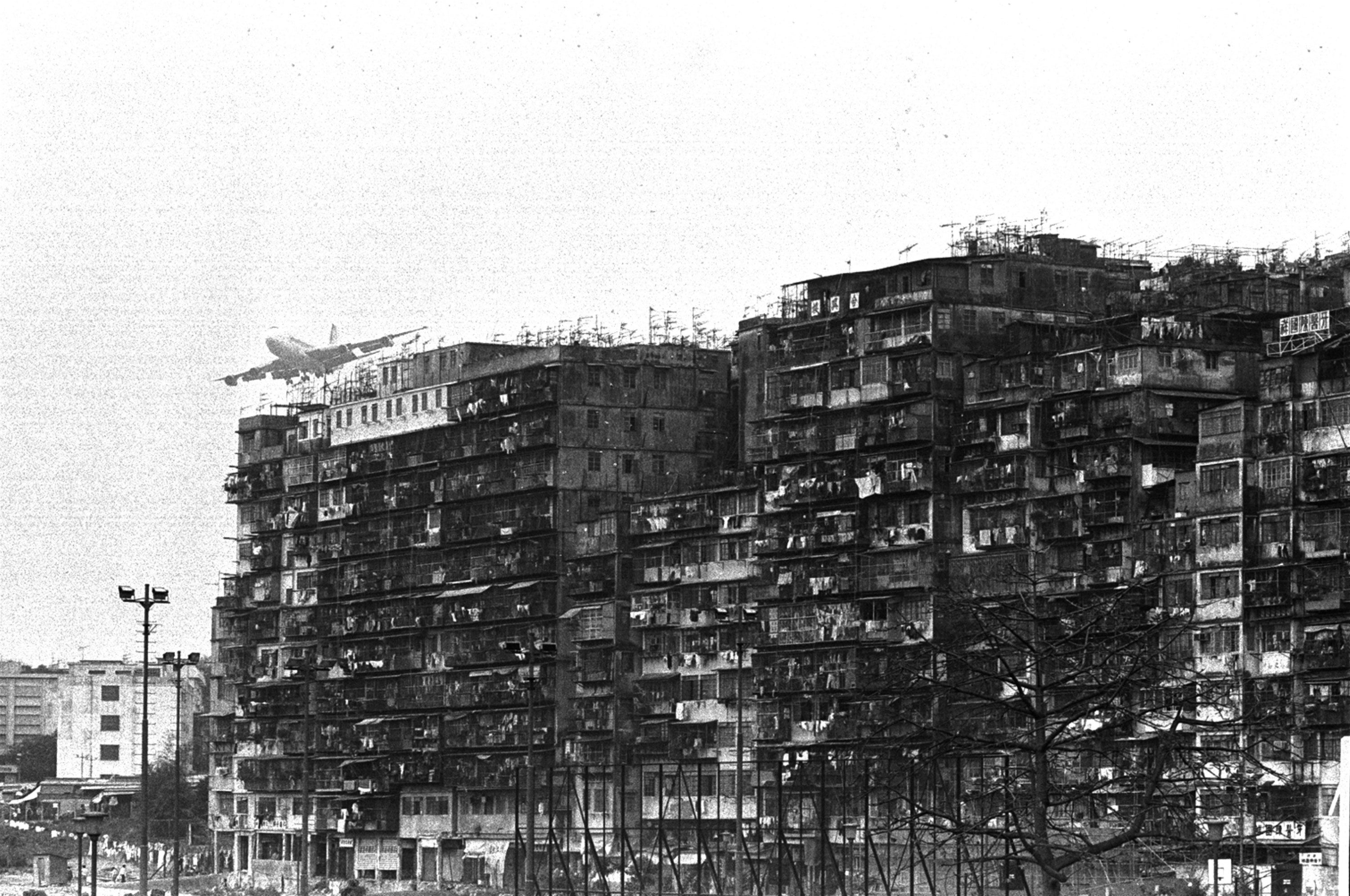 The Walled City had attracted widespread attention in Japan, and its demolition was even aired on national television. During the arcade’s construction, Hoshino asked a family friend to mail over a bunch of real Hong Kong garbage to get everything just right. His team even spent time sourcing old electronics and authentic tin mailboxes from Hong Kong. Visiting Anata no Warehouse became a low-key pilgrimage for film buffs, historians, architects, researchers, and even young Hong Kongers.

Across decades of film, literature, and video games, Kowloon Walled City had been the setting for numerous dystopian tales of lawlessness and corruption. The architectural behemoth appeared in iconic movies like Bloodsport, Baraka, and Crime Story. The Walled City popped up in Shenmue II, Call of Duty: Black Ops, the Street Fighter V II anime, and naturally, Shadowrun: Hong Kong.

Over the years, photographers documented its chaotic facade and day-to-day life inside the city. It was sometimes called “the city of darkness” because most of its inhabitants did not receive natural light. To outsiders, it was a place of unimaginable crime, poverty, and inhumane living conditions. At its peak, it was described as the most densely populated settlement in the world. But to those who grew up in the Walled City, it was a tight-knit community of families, co-ops, and small businesses. Many residents had nothing to do with crime: The Walled City was simply home.

Its reincarnation as a Japanese arcade was also a nod to its role as a place of community. Even today, Japanese people flock to arcades to escape from reality, or immerse themselves in larger-than-life experiences that can’t be had at home. On a mundane level, the arcade is still a place to hang out with friends, go on dates, or simply be alone. On a larger scale, it’s a refuge for both old and young who seek human connections in a digital world. 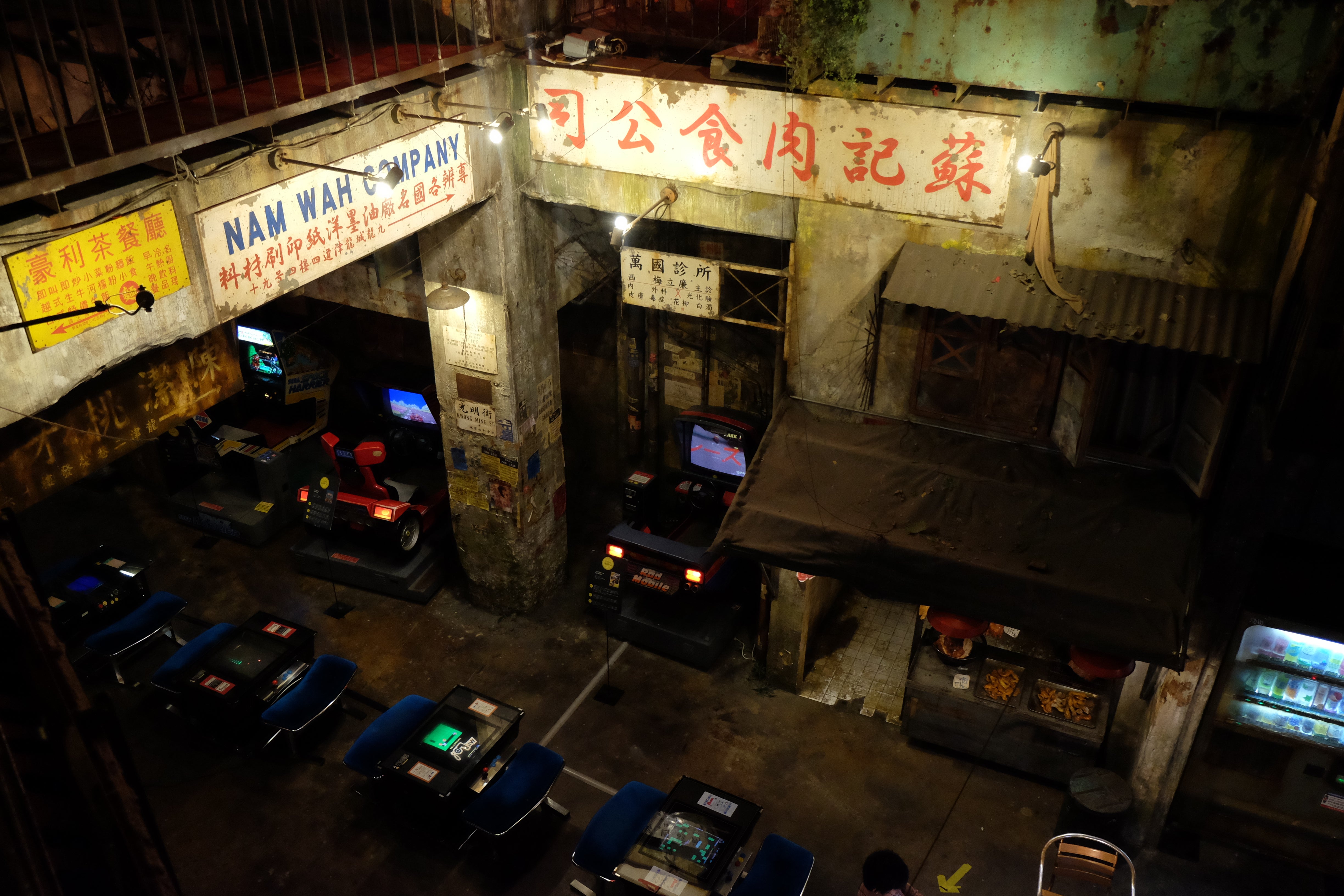 I visited Anata no Warehousein in 2019, in the middle of a sweaty Japanese summer. Walking through the main entrance into a cool, dim hallway, I was surrounded by a din of recorded Cantonese voices. The combination of strategically-placed speakers, papered-over windows, and grimy lighting was strikingly effective; the “conversation” around me breathed life into the illusion of a real human presence behind the grungy walls.

I walked past dozens of torn flyers for escort services, under bare lightbulbs that dangled from the ceiling in spartan metal cages. There was also a groan-inducing window that showed a recreation of a Walled City prostitute’s room, complete with a sleeping mannequin in a bra and peeling art deco posters. While some descriptions of the warehouse have called it an “amusement park,” there were no ticket booths or guides to show you the way—visiting the warehouse was an entirely self-driven experience.

A well-curated collection of retro classics greeted me on the second floor, including Gauntlet and Space Harrier. This second-floor museum section was also the most iconic (and most photographed) part of the warehouse, accentuated with neon lighting, hanging laundry, apartment facades, and a food stall with fake poultry. Neat placards sat alongside an array of different games that came in the form of sit-down consoles, tabletops, and standard uprights. There was a well-kept Rad Mobile cabinet—the 1991 racing game that featured a then-unknown Sonic the Hedgehog as a dangling rearview mirror decoration—tucked into an alcove. A vintage light blue cabinet housed Taito’s 1987 arcade shooter Darius, known for its trio of mirrored screens that created the illusion of one super-wide monitor.

Next to these was an artificially aged vending machine that I ultimately decided against making a purchase from, even though its drinks looked fine. Its equally beat-up neighbour was a UFO Catcher claw machine whose mottled glass showed silhouettes of stuffed animal prizes inside. It was like stepping into a lost world, set to an ambient soundtrack of clinks, chimes, and soothing trills of far-off slot machines.

On the other side of the second floor, surrounded by more faux-decrepit walls and faded posters, sat a horde of shiny white Namco claw machines and change machines with deliberately yellowed, stained casings. Claw machines boasted everything from hot sauce and dried squid to Red Bull and Monster energy drinks. The machine holding the latter was accompanied by a printed sign that said “It’s fucking delicious,” like some kind of pre-Death Stranding guerrilla marketing. 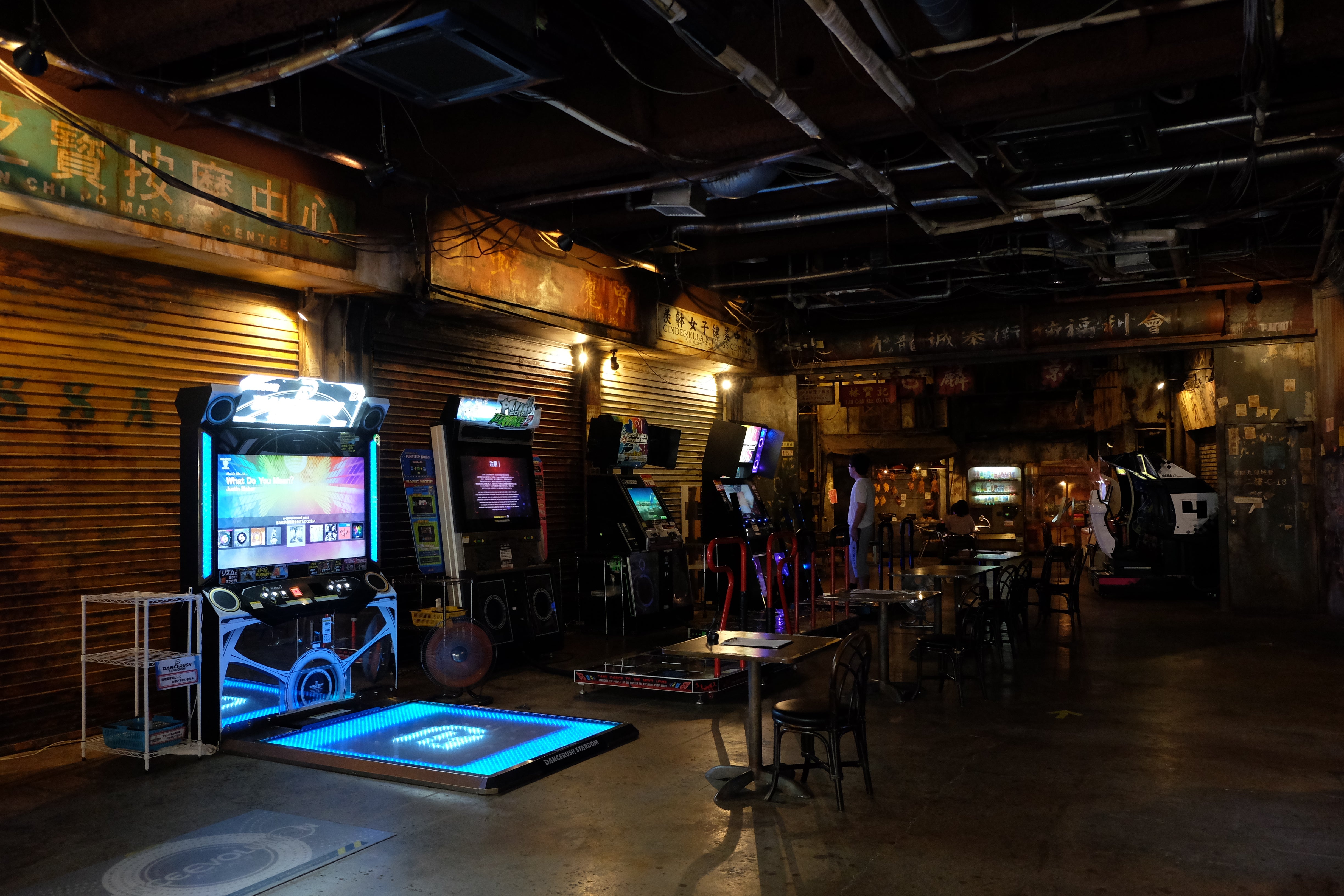 Occasionally, I’d bump into a uniformed employee cheerfully restocking a claw machine, which was a comforting reassurance that the food was being monitored by real humans. I waved at a young man approaching the dried squid claw machine, hoping to ask why he’d rather play for a cheap snack instead of just buying one at a convenience store, but he brushed me aside.

I wasn’t the only rubbernecker in Anata no Warehouse’s claw game section that day. A giggling tourist couple with a telephoto lens was similarly enthralled by the sheer variety of prizes on parade. One machine was dedicated entirely to Minions merch, another to vegetarian-friendly tofu cookies, and several to electronics and anime figurines.

Like any respectable arcade, Anata no Warehouse also had its share of classic slot machines, dance staples like Dance Dance Revolution and Dancerush Stardom, various Street Fighters, a row of Formula One racing games (and some old Daytonas), and rhythm games like Taiko No Tatsujin. The dance games, stationed in front of a wall of shuttered old “storefronts,” looked oddly at home, like a scene you wouldn’t be surprised to see in cyberpunk concept art. 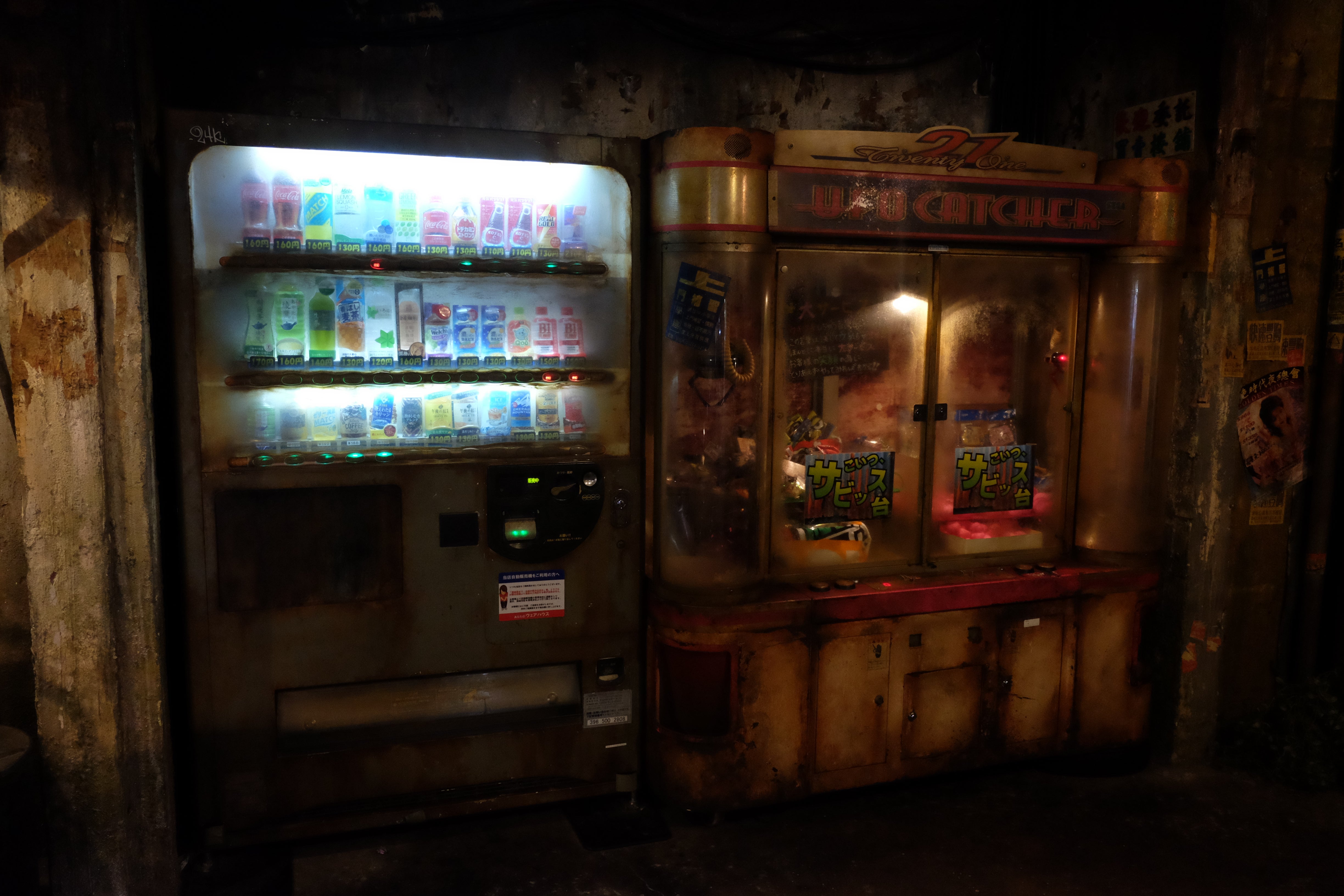 In contrast to their surroundings, all the actual game machines were normal and unspoiled, probably to avoid putting people off actually using them. It was hard to miss the truck-shaped cabinet for Let’s Go Jungle: Lost on the Island of Spice, a cheesy Sega rail shooter where players sit in a revolving seat to blast huge mutant creatures on two screens. Made for two, it’s quite possibly the ultimate co-op experience for couples trying not to break up. Sadly, nobody was playing it.

The Walled City aesthetic ends on the third floor. The topmost floor of the structure is taken up by bizarre marble statuary flooded in unnerving red lighting, plus a large area for billiard tables. I spent most of my time creeping around the first three floors, thinking about how Hoshino had mentioned, but never disclosed, the “super secret ageing techniques” used to achieve this special environment. With any kind of historic recreation, the devil is truly in the details. I noticed a clump of realistic weeds “growing” next to the Gauntlet machine. 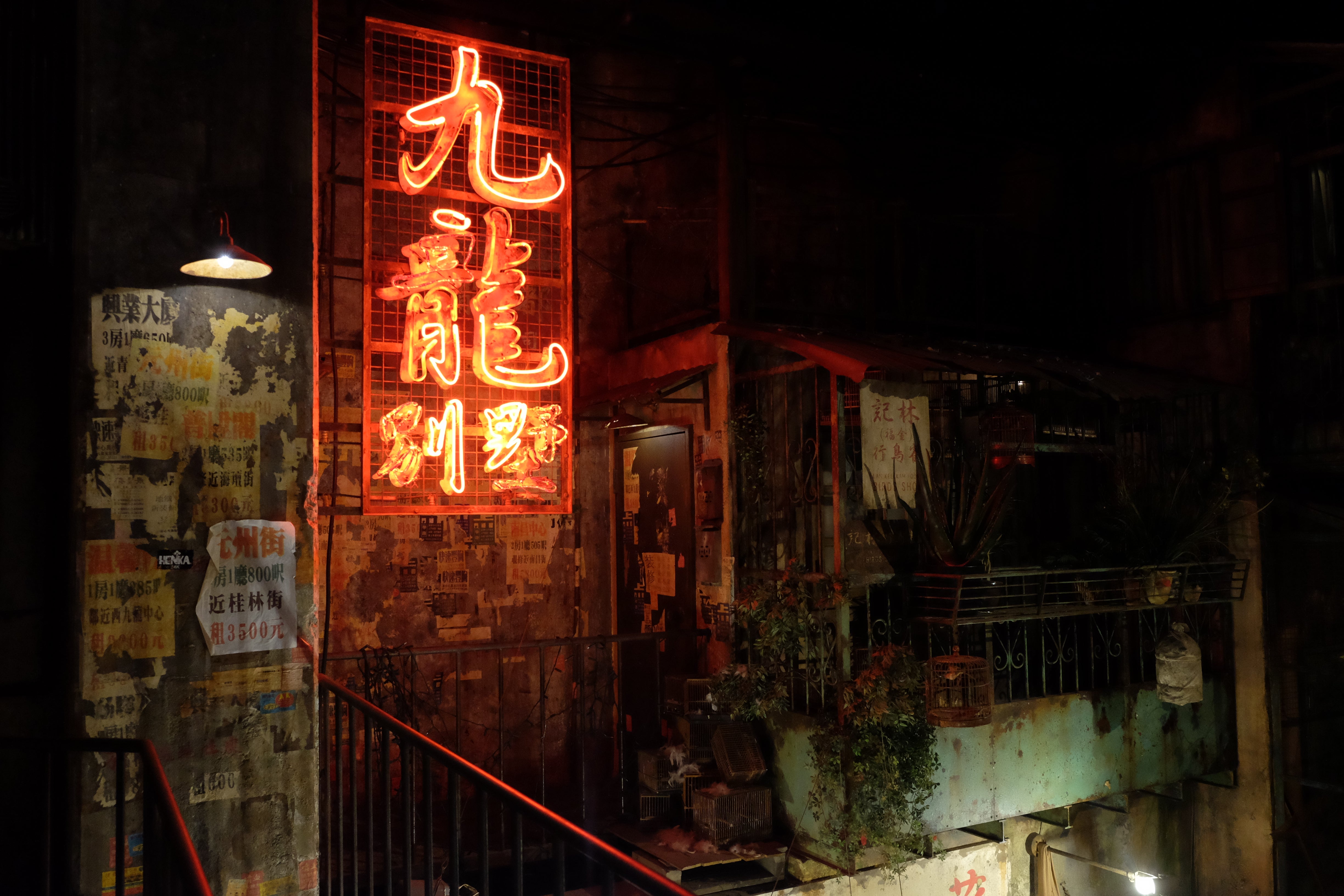 On this quiet weekday afternoon, the entire warehouse seemed to have a little over three dozen guests. Most of them were perched at regular slot machines, perfecting their DDR moves, or chatting with friends.

In contrast to some of the brighter, perkier mega-arcades in places like Akihabara, Anata no Warehouse was cool, dark, and inviting. It was a windowless escape from the heat outside, or if you wanted to be alone, the perfect place to hole up for the afternoon.

Most people just wanted to be left alone, as Anata no Warehouse, for all its weirdness, was just their regular neighbourhood haunt, a chance to disappear into the Walled City.