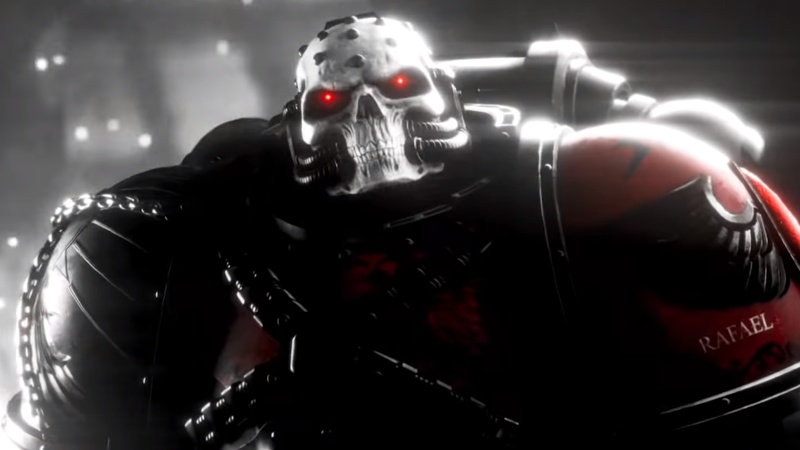 Very excited for no one to succumb to the Black Rage at the worst possible time, that never happens when the Blood Angels are around, no siree. (Image: Games Workshop)

I mean, it’s the grim dark future of the 41st Millennium. There’s bound to be a lot of the red stuff splashing about. Especially when the Blood Angels are involved.

Over the last weekend, Games Workshop finally lifted the lid on Angels of Death, a new animated series in development at its recently established Storyforge group, which is working on bringing the worlds of Warhammer 40,000 and Warhammer: Age of Sigmar to more mediums, ranging as far as the show to animated ventures like this one. And honestly, it looks rather striking”adopting a fascinating visual style that renders the universe of 40K in greyscale, save for the striking red of the Space Marines of the Blood Angels chapter, as they try to defend evacuating human ships from a world about to be overrun by the alien hiveminds of the Tyranids.

It probably shouldn’t be too surprising that Angels of Death looks this visually intriguing. It’s the brainchild of a collaboration between Games Workshop and fan director Richard Boylan, who shot to Warhammer viral fame for his stunning, black-and-white adaptation of Aaron Dembski-Bowden’s 2010 novel Helsreach. Boylan followed it up with an equally fascinating live-action short, Guardsmen, before attracting the attention of Games Workshop in an official capacity.

It’s cool to see GW not just reach out and work with a fan like this, but also adapt its beloved worlds in ways that, at first, seem unsuspected for a universe that gleefully prides itself on just how incredibly, hilariously over-the-top its gritty sci-fi aesthetic is, and how seriously it treats that ridiculousness in turn. Angels of Death doesn’t skimp on that aesthetic in the slightest, but its tasteful, minimalist colour palette is hardly the first thing you’d expect when â€œSpace Marine Animated Show Literally Called Angels of Deathâ€ pops into your head.

The company is doing something similar with another Storyforge project teased the weekend prior, Hammer & Bolter, an animated anthology series kicking off with a 2D, anime-inspired short following a group of Imperial Assassins.

After years of relative stagnation when it came to adapting its beloved tabletop games to other mediums beyond its own remit (aside from video games, that is), Games Workshop is finally starting to embrace the richness of its universes and recognise their potential to live beyond the games themselves. And doing so in some really interesting ways!

Between official series like this, and incredible fan works like Astartes over the weekend, there’s never been a better time to know no fear and dive into the world of 40K, really.