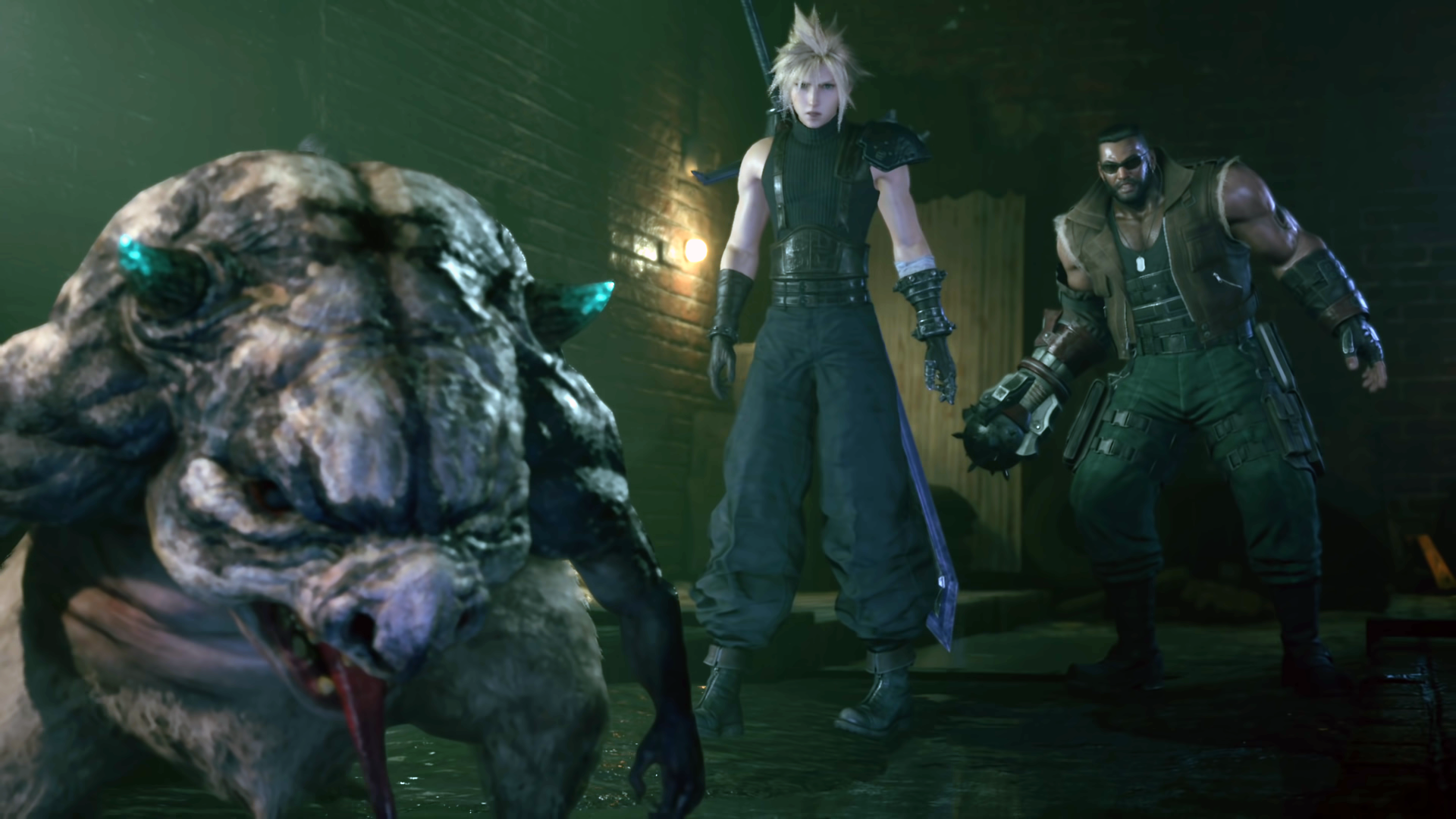 Screenshot: <a href="https://www.youtube.com/watch?v=RQmodye8OQA">videogamers</a>, YouTube
To sign up for our daily newsletter covering the latest news, features and reviews, head HERE. For a running feed of all our stories, follow us on Twitter HERE. Or you can bookmark the Kotaku Australia homepage to visit whenever you need a news fix.

I recently hit an emotional low point with Final Fantasy VII Remake. It was hard to watch my favourite side characters suffer and Avalanche members Tifa and Barret grapple with their culpability in Shinra’s latest attack. I even took a day off to decompress. When I returned, however, I was greeted by a ridiculous mission about chasing a smart-arse pig goblin through the Midgar sewers. Maybe not the first thing that would’ve come to mind, but it still helped raise my spirits.

Sector 7 is gone and its surviving residents displaced, and many of them blame Avalanche for Shinra’s genocide against the working class. Aerith, apparently the last of an ancient race of mystics capable of communing with the planet, is a prisoner of Shinra. It seems everyone is out to get our heroes, from the fascists that rule Midgar to small-time thugs like Don Corneo. No better time, apparently, for Cloud to walk around asking folks if they have any small jobs he can handle.

Final Fantasy VII Remake is clear about what it expects from you at this point. A potentially traumatic assault on Shinra’s headquarters looms in your future, mirrored in the way you can now see its ominous tower from the slums thanks to the missing Sector 7 plate. “Now is the time to finish any unresolved side quests you may have,” the game says, both through canon conversation and immersion-breaking text boxes. I’m always grateful when games signal these sorts of one-way barriers, but it didn’t feel entirely necessary in Remake. The urgency with which the group wants to save Aerith was enough to indicate the mission’s “point of no return” nature.

That said, I still took my time to wrap up a few optional quests. I gathered CDs to cheer up a group of former Sector 7 residents in Wall Market, took great pleasure in pilfering Don Corneo’s secret stashes, and made sure a few wandering Chocobo got back to the stables safely. It felt good to help people after failing to stop Shinra in the previous chapter. Returning to dungeons from earlier in the game also proved to be an entertaining endeavour, providing me with the opportunity to test out my new skills on a few enemy types that gave me trouble the first time around.

Once all that was out of the way, I felt comfortable making a second visit to Don Corneo’s mansion. Travel out of the slums is restricted after the Sector 7 incident, so Cloud and company must find another way to reach and infiltrate Shinra’s headquarters. Instead of the slumlord, however, the party runs into Leslie, a Corneo lackey who helped Cloud, Aerith, and Tifa escape from the building during their first adventure there. Leslie promises to help them reach the upper levels of Midgar if they accompany him through the sewer to find Corneo’s secret hideout. Cloud is more than happy to hand that douchebag another thrashing, and so they set off.

Much of this second trip through the sewers involves tracking down a creepy little pig monster after it steals a crucial key from Leslie. The little jerk taunts Cloud and his teammates at every turn, forcing them into several battles before they finally corner it. The fight against the Mischievous Shoat, as Final Fantasy VII Remake calls it, is short and uneventful, but there was something endearing about the chase. It helped me forget about the world-altering mission ahead of me for a little bit, focusing the game’s expansive antifascist narrative into a small scenario about Cloud chasing a jaunty pig who all but smacks its own furry arse while trying to piss off the mercenary. We could all use a little Mischievous Shoat in our lives right now, I think. It’s also here that I cemented my love for the Carbuncle summon. After watching others play Final Fantasy VII Remake, I’ve realised that I’m not very good at the game. I’ve made peace with that. Whereas some folks can get by on basic skill usage, I often have to rely on summons to even the odds during both boss battles and random encounters. Many summons provide a great boost of offence, but Carbuncle is all about support and healing. The giant-headed cat thing can increase the party’s resistance to physical and magic attacks as well as provide a boost to the rate at which the ATB gauge builds. And once its time with the party runs out, Carbuncle revives fallen party members and heals everyone, which has gotten me out of more than one jam. Sure, I’ve since found much stronger summons, but I’ve made sure to keep one character equipped with Carbuncle at all times.

I’ve tried to stay as far away from Final Fantasy VII Remake spoilers as possible, but it feels like I’m nearing the game’s end. The mission to save Aerith feels important in a way none of Cloud’s previous adventures have, especially since it involves taking the fight directly to Shinra. I was grateful for the opportunity to help some of the folks living in Midgar’s slums and the absurdity of chasing down a pig monster in the sewers was a fine palate cleanser. But now it’s time to get back to business.