During a pandemic, illness isn’t the only thing that spreads. Fear and panic set in, leaving room for misinformation to seep into newly formed cracks in society’s foundation. Some people believe that sunlight kills covid-19. Some think that drinking water is enough to keep it at bay. Some don’t know what to believe. In light of this confusion, the administrators of popular World of Warcraft fan server Elysium felt they had a moral obligation to act.

Over the weekend, Elysium—an unofficial, fan-run project that lets players relive early versions of WoW sans Blizzard’s oversight or subscription requirement—ran an event called “Pandemic In Azeroth.” The idea was ambitious, but risky: Without warning, Elysium’s admins dropped a virus into the game world that, within 15 hours, infected 2,276 players. Within 24 hours, that number jumped all the way up to 7,000. At its peak, the virtual illness impacted 88 per cent of active players.

After the virus had time to spread organically, the admins let everybody know what was going on: A virus had been placed on an in-game object. A player, dubbed “patient zero,” had touched that object and then interacted with other players and NPCs, any of whom had a chance of contracting the virus. It could spread to objects as well. If players who came into contact with germ-coated objects or characters failed to rush off to a city and wash their hands using a special “hand soap” item, their character would contract an illness that led to a 5 per cent stat reduction and 10 per cent movement speed debuff. Oh, and of course, they’d become a danger to other players, too. 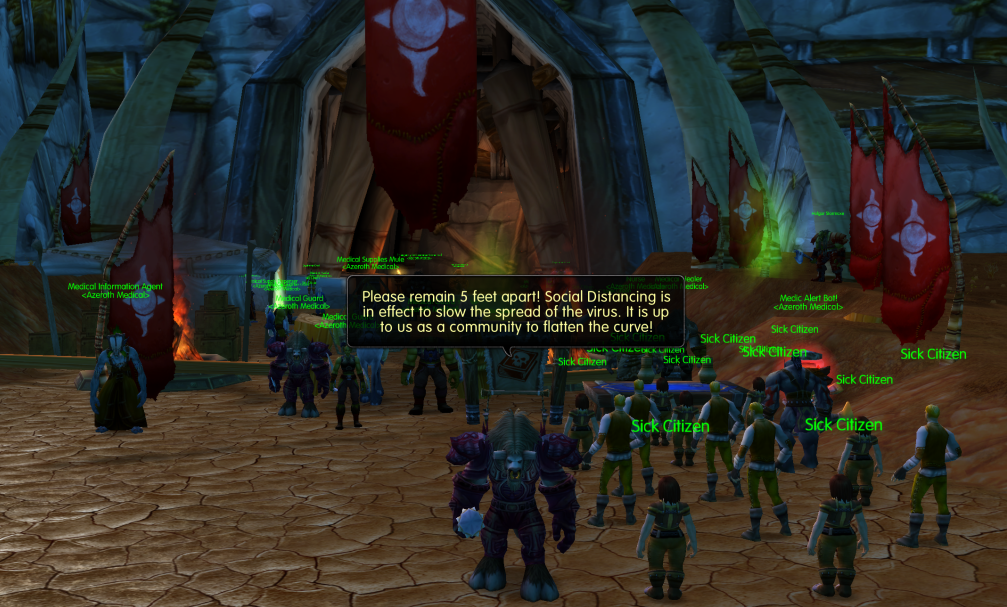 After demonstrating the virus’ terrible potential, the admins reset it. They then tasked players with completing quests themed around containing covid-19’s orc-infecting twin. This involved a combination of social distancing (read: keeping clear of other players while out slaying specific numbers of every animal like some kind of demented, Ark-less reverse-Noah), wearing face mask items, and scrubbing objects and vendors with an anti-bacterial cleanser item. Players could also use a symptom checker robot, based on the symptom checker from the World Health Organisation website, to check for signs of infection.

The overriding goal of the event was education, according to an Elysium admin named Rain, who’s been running the fan project for the past two years after a scandal involving thousands of dollars nearly sank the whole thing in 2017.

“I know that we have a lot of players who are young or don’t have access to the information I do—or at least the same amount of information,” Rain told Kotaku over a Discord voice call, noting that Elysium’s total of 3.5 million total accounts and between 10,000-15,000 players logging in each week represents a large platform. “I felt like I had an ability to inform people and help out in this time.”

“I didn’t want it to become hopeless.”

He was also aware of the risks of replicating a virus that’s claimed over 130,000 lives worldwide in a cartoon-y fantasy video game: “I was very conscientious of the fact that people have died from this, and it’s affecting people in pretty negative ways,” said Rain. “It was always a little risky to do this. I’m sure that’s why a lot of legitimate gaming companies aren’t doing anything, because it’s so sensitive. I wanted to make sure that whatever we did was 100 per cent about education and providing information and not anything to do with making us money or to be in any way poorly perceived by the people we were trying to inform.”

This is why Elysium didn’t just replicate a prior, fairly notorious plague that spread through World of Warcraft in 2005. The Corrupted Blood incident, in which an HP-draining debuff spread from a raid boss to basically everybody due to an unforeseen loophole involving pets, was used to study real-life epidemics by epidemiologists who are now aiding in the fight against covid-19. However, it resulted in widespread in-game death, especially among lower-level players. Rain and the Elysium team wanted players to understand the dizzying speed at which viruses can spread, but they didn’t want to suffocate them with the stench of death and decay.

“We didn’t want to replicate [Corrupted Blood] because, in it, there’s death,” said Rain. “In our project, for this particular event, players couldn’t die from it. I wanted to maintain the lightness of it and make sure it wasn’t too impactful on people.” 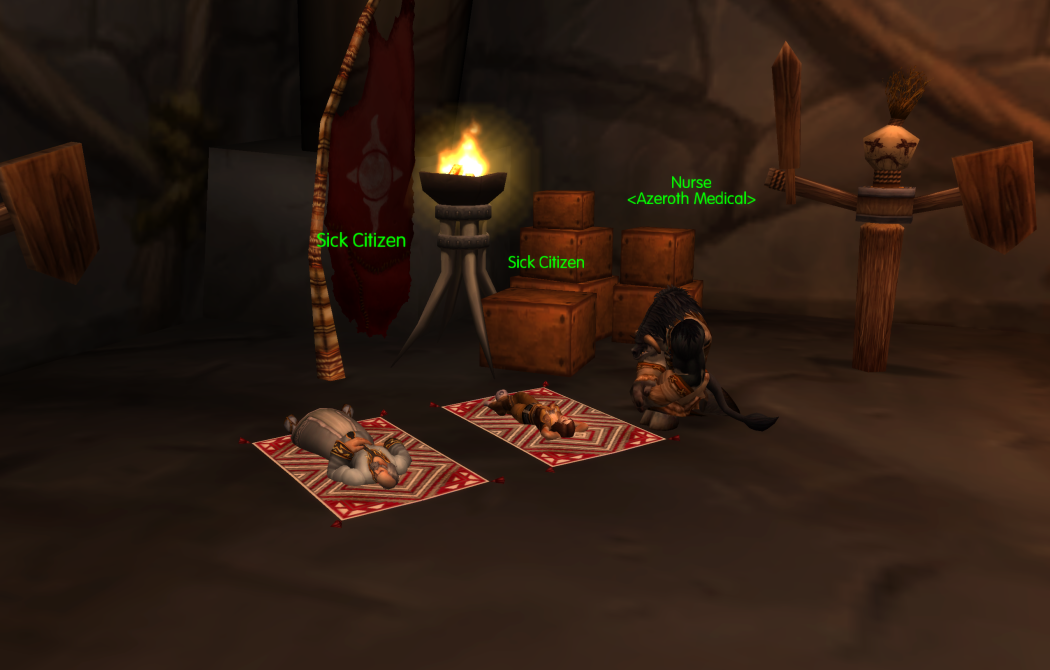 There were also other, less dire factors to take into consideration. During difficult times, people turn to games like World of Warcraft as a means of escape. Suddenly, Elysium players were looking at a scenario where, bombarded by disheartening news from the frontlines of the battle against the pandemic, they could log onto their favourite MMO server and… get drafted into a battle against a pandemic. That’s why the event was limited by both time and level. The Azerothian plague lasted just one weekend, and players below level 10 were immune. At the end of the event, players were able to kill a preexisting WoW boss, Noth the Plaguebringer (because he brought the plague, you see), and obtain a cure they could share with other players. The two guilds who managed this feat then got to run a victory lap for all the World of Warcraft to see.

So the event was rooted in a struggle we all currently face, but it had a sense of momentum to it. It was still intended to be enjoyable. “I didn’t want it to become hopeless,” said Rain.

It was also time- and level-limited for another reason: to keep trolls from getting any funny (read: disrespectful of real human beings) ideas. Rain said that, in part because of covid-19, Elysium’s concurrent player count has just about doubled in recent times, and new players would have made tantalising targets for trolls.

“I am a bit shook by the blatant disregard some people had [for] the event.”

“You always have those people, especially on a private server, that want to cause chaos, be The Joker of the world,” he said. “They want to go around and infect people. So I didn’t want people who just joined [to be susceptible].”

Rain said that, by and large, the event was well-received, though “probably one out of every 10 people” didn’t love cruel reality raining on their MMO escapism parade. Players I spoke to echoed this sentiment.

“I believe what Rain did was a great idea, even though it was frustrating, [because] anyone who didn’t really understand the issues now has a much better idea,” a player who goes by the handle DjDawan told Kotaku over Discord.

“I am a bit shook by the blatant disregard some people had [for] the event,” said a player who goes by the handle Eldrinae. “[They] just went on like nothing happened at all. Most people did the right thing and tried to help others. A lot of people just stopped playing during the pandemic, which is of course the most noble thing to do (self isolation in a nutshell), but some people just refused to realise this is the actual world we live in just as much as the virtual one we hide away in to avoid seeing things with our own eyes wide open.” 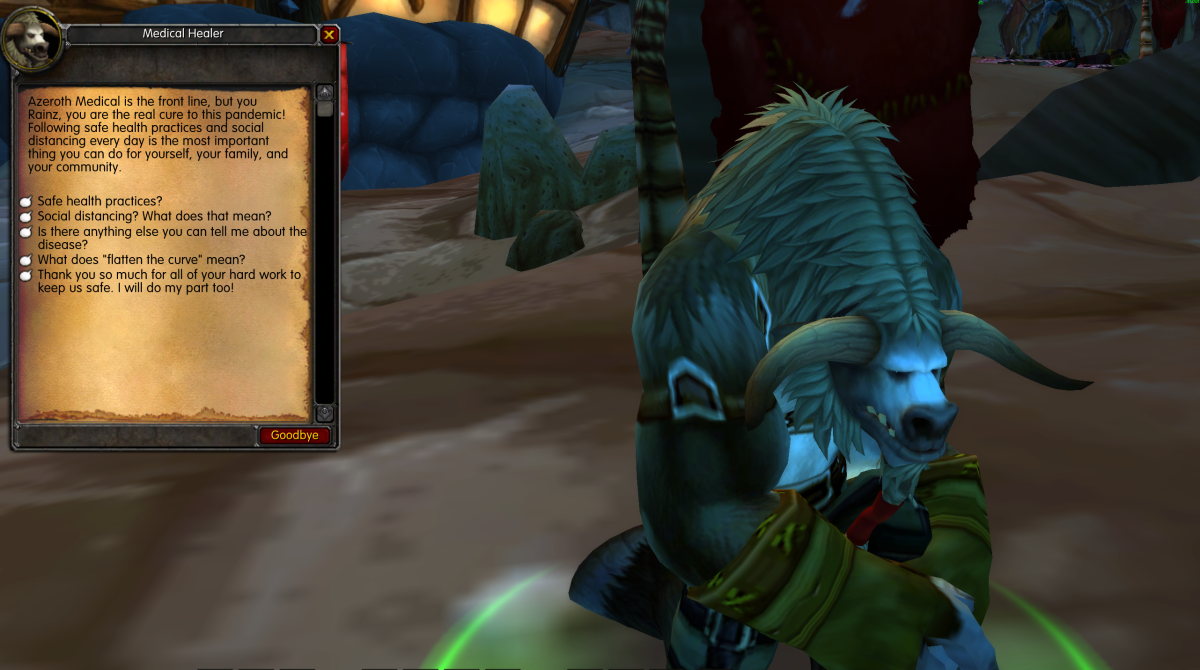 Rain was largely pleased with the results. After players learned how to fend off the virus, infection rates dropped drastically, from 88 per cent to 42 per cent. He takes that as a sign that people internalized the information the event provided and will hopefully apply it in the real world too. But even if lessons learned from Elysium’s simulated pandemic only stick with a small handful of players, Rain will have achieved his goal.

“If I could help even one person be informed, I think it’s worth it,” he said. “We can all feel a little uncomfortable for a couple days if it can help people who aren’t in our situation.”