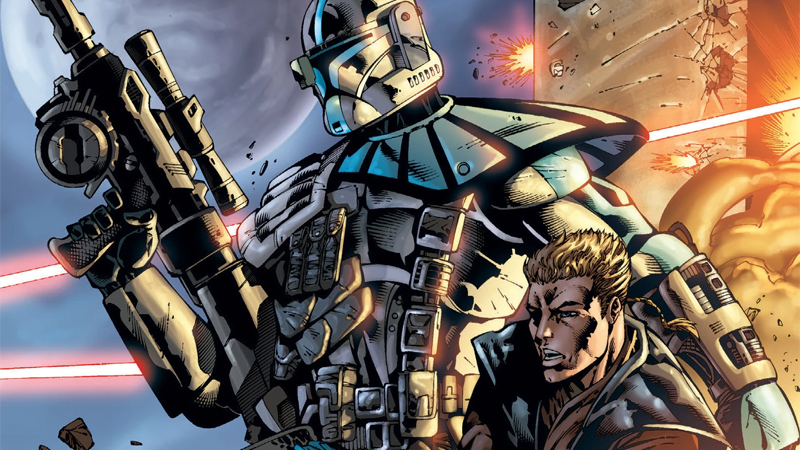 Star Wars: The Clone Wars has now ended, bringing about closure to our definitive understanding of a conflict and characters that fundamentally shaped the sci-fi saga. And not just the prequels but everything from Rebels to The Mandalorian, much further beyond the original three movies. Missing it already? Have no fear: there is, as they say, another.

Back in the old held the rights to Star Wars comics.

The publisher spent the best part of nearly two and a half decades covering everything from the times before The Phantom Menace to the era of the Old Republic, to the times immediately during and after the original trilogy, to far-flung futures of time periods hundreds of years after Return of the Jedi. But one of its most fondly remembered series was Republic, launched in December 1998, a precursor to the then-upcoming Phantom Menace.

Initially launched as simply Star Wars, the series opened on arcs that revolved around Jedi Master Ki-Adi Mundi in the 20-year period before the events of The Phantom Menace as he wandered the Republic on missions for the Jedi Council. It later expanded, introducing familiar and original Jedi heroes as it continued to explore the world the first entry in the Prequel Saga had begun to flesh out.

The Jedi investigated crimes, fought pirates, and yes, even fought a war”over Trade Routes! But 46 issues in, and with Attack of the Clones hitting theatres, Star Wars was rebranded as Star Wars: Republic. Three issues after that, on January 23, it became the then-official home of comic stories depicting the events of the newly unveiled Clone Wars.

Republic would spend the next three years thrusting its Jedi heroes into the fires of a conflict that asked them to challenge their deepest beliefs. And it wasn’t just through familiar faces like Anakin Skywalker and Obi-Wan Kenobi, or Mace Windu and Yoda, but characters only barely glimpsed onscreen like Ki-Adi, Kit Fisto, and Shaak Ti, or original characters created and fleshed out for the comics like Quinlan Vos and Aayla Secura. And it did so mostly by putting them through absolute hell.

The Clone Wars comicsÂ touched on the dark things the Jedi would have to face on the front lines of a conflict unlike anything the Order had seen in hundreds, if not thousands of years, from Quinlan Vos’ brush with the Dark Side on a dangerous undercover mission to infiltrate Count Dooku’s inner circles, to Anakin reckoning with his place as a “special” Padawan, pulled away from the horrifying front lines at the behest of the Chancellor as the masterless Padawans he was fighting alongside at the time all fall one by one. It wasn’t just Jedi that the series reflected this trauma upon either, but Clones, Senators, and even Separatists alike. 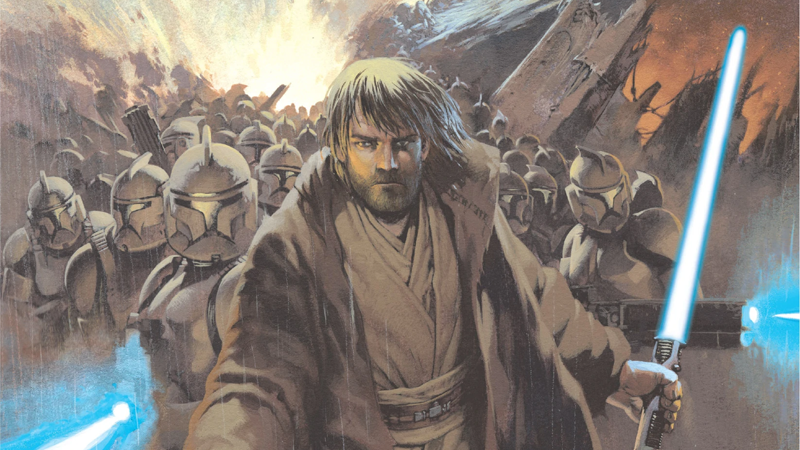 The Clone Wars we eventually saw in the 2008 animated saga could get dark, and traumatic (even ostensibly as a show for families!), but there was something about Republic‘s myriad Clone Wars arcs”collected across nine volumes and nearly 40 issues of comics”that really hammered home the kind of brutality interstellar conflict could have, and what that did to the Jedi thrust into the heart of it. As an ongoing comic, it could take the time to dive deep into the emotional arcs of these characters in ways the Clone Wars cartoon could only really reserve for its most major characters, even between its extended storyline arcs.

As it began to wrap up in 2006, with Revenge of the Sith bringing the Clone War to an end on screen the year prior, Republic would become Star Wars: Dark Times, focusing on the rise of the Empire after the end of the prequels. But its work in establishing what the Clone War was for legions of Star Wars fans in those three years was fundamental.

Order 66″as it plays out in Revenge of the Sith“is dramatic, but if you’d only seen the movies it was mostly about watching characters who maybe had two to three lines of dialogue between them get murdered. If you’d been reading Republic in the wait between Episodes II and III? It’s devastating. Ki-Adi, Aayla, Kit, Plo, characters who’d gone through so much in the pages of those comics, endured so much, snuffed out in an instant.

It might not be canon anymore and, in what replaced it within canon through the animated series, we got perhaps one of the most incredible pieces of Star Wars storytelling in over four decades of the entire franchise. But in light of Star Wars: Clone Wars‘ end, there’s never been a better time to go back and revisit the groundwork Republic laid for its success, a glimpse into the Clone War that once was. We’d heavily recommend starting from the beginning and just gorging on everything from Republic #49Â to Republic #83, but if you want the very best of the best in what the series could do with the Clone Wars? Here are some choice story arcs.

The Defence of Kamino (Issue #50, by John Ostrander, Haden Blackman, Scott Allie, Jan Duursema, Stephen Thompson, and Tomas Giorello)”Begun, the Clone War has! Two months into the conflict, the Separatists launch a surprise strike at the heart of the Republic’s Clone production, as Jedi and Clone Trooper alike take to the skies, seas, and platform-cities of Kamino to defend the birthplace of the Grand Army.

Double Blind (Issue #54, by John Ostrander and Jan Duursema)”One of Republic‘s biggest plotlines begins. Jedi Master Quinlan Vos has been sent on a mission to infiltrate the upper echelons of the Separatist command. But has his undercover operation gone too far, and has the lure of the Dark Side turned Vos into a traitor?

The Battle of Jabiim (Issues #55″#58, by Haden Blackman and Brian Ching)”The rain-soddened planet of Jabiim lays the scene for one of the most gruelling battles of the war as Anakin, having seemingly witnessed Obi-Wan killed in action, finds himself banding together with surviving Clones and a squad of similarly masterless Padawans to endure a horrifying assault.

Hate and Fear and No Man’s Land (Issues #60 and #62, by Haden Blackman, John Ostrander, and Tomas Giorello)”Good news! Obi-Wan didn’t die on Jabiim. Bad news! He and ARC Trooper Alpha were captured by the Dark Jedi, Asajj Ventress.

Striking from the Shadows (Issue #63, by John Ostrander and Jan Duursema)”The Vos arc continues, as Quinlan successfully infiltrates Count Dooku’s inner circle. But Dooku reveals a shocking secret to the undercover Jedi that may destroy his faith in the Order and the Republic forever. 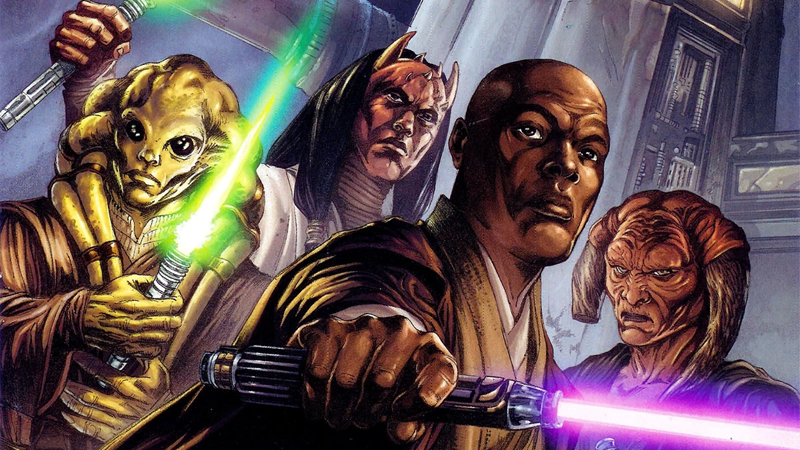 Show of Force (Issues #65 and #66, by John Ostrander and Jan Duursema)”The Bounty Hunters Guild has put out a contract on every Jedi General in the galaxy: bring one in dead for a splashy payout. Mace Windu is not pleased to hear this and gathers a group of similarly miffed Masters to pay the Guild a visit.

Armour (Issue #68, by John Ostrander and Jan Duursema)”Quinlan Vos has seemingly been lost to the Dark Side, a fact his dismayed former Padawan Aayla Secura learns when she crosses sabers with him. Accompanied by Commander Bly, Jedi and Clone alike examine the traumas enacted upon them all by the Clone War.

The Dreadnoughts of Rendili (Issues #69″#71, by John Ostrander and Jan Duursema)”As Masters Saesee Tiin and Plo Koon battle across the stars to save a fleet of dreadnoughts from being captured by the Separatists, Obi-Wan finds himself having to team up with his former friend, Quinlan Vos, who may not be as lost as we’ve been lead to believe.

Trackdown (Issues #72 and #73, by John Ostrander and Jan Duursema)”The Vos spy arc concludes, as information that could secure an end to the war in the Republic’s favour falls out of his hands and into the Jedi Council’s lap. In order to prove its veracity, the Council tasks Aayla with once again confronting her fallen former master.

Into the Unknown and The Hidden Enemy (Issues #79-80 and #81-83, by Randy Stradley, Doug Wheatley, John Ostrander, and Jan Duursema)”Order 66 has been executed. The Jedi Order is no more. Across the stars, the Jedi that survived the initial moments of this fundamental shift in the state of the galaxy far, far away now have to reckon with how, and even if, they’ll survive the moments to come.

Dark Horse’s Star Wars: Republic comics are available a few ways. You can buy them digitally and in collected paperback releases as part of the original Star Wars Omnibus collections released by Dark Horse across four volumes”and republished by Marvel Comics under the “Legends” banner”or as part of Marvel’s own ongoing re-release of the series in the publisher’s own “Epic Collections“ reprint line.