Last week, Amazon Games released Crucible, a free-to-play, team-based shooter, to mild excitement. Eight days later, Crucible players are almost nowhere to be found on the (Amazon-owned) Twitch streaming service, a strong sign that the community around the game seems to be already dwindling.

Crucible, currently available only for PC, pits players against other players and alien creatures on a dangerous planet. Part Overwatch, part League Of Legends, with aesthetics that reminded me of Electronic Arts’ Anthem, Crucibleis… fine. Generic, yes, but playable, and even fun with a good team. But in a world with games like Valorant, Overwatch, Dota 2, and Fortnite, “fine” isn’t enough.

Over the last few days, I’ve been checking in on Twitch and seeing how well Crucible is doing compared to other, similar games. The results are particularly poor for a just-launched, much-hyped game. As I write this, Crucible streams are attracting under 600 viewers in total. That puts it below games like the original EverQuest (first released in 1999), Grand Theft Auto: Vice City (2002), and something called Anime Land. 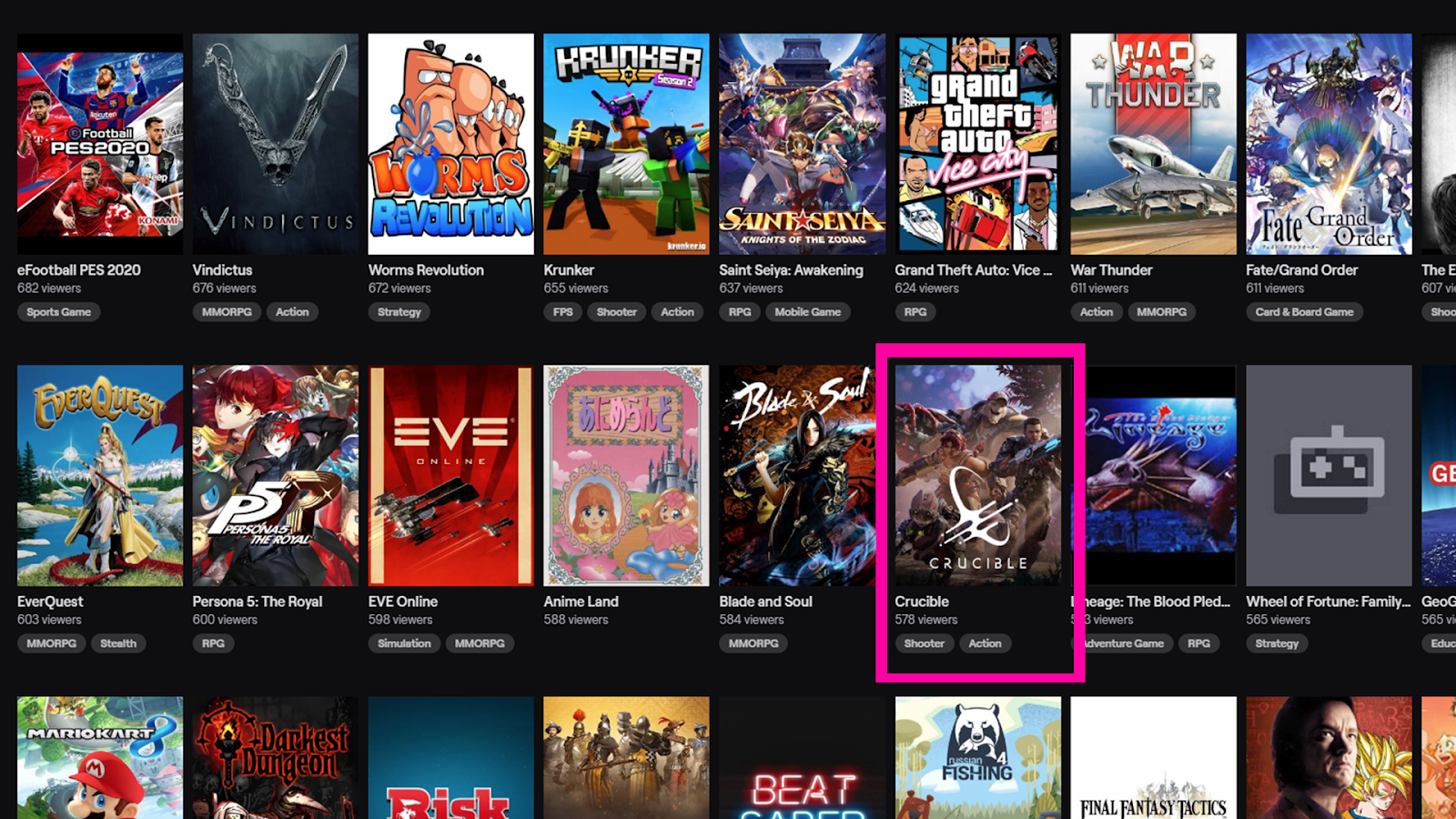 Earlier today, Crucible did have over 5,000 viewers—still not great compared to games like Fortnite and Valorant that often have tens of thousands of viewers or more, but much healthier. However, that number was almost entirely due to a single sponsored stream being run by Twitch user NiteNightKid. Once he stopped streaming Crucible and went back to League of Legends, the viewer count dropped back down to less than 600. (I reached out to Amazon and Twitch to get more information about the sponsored streams, but have not received a response.)

Amazon is certainly trying to get Crucible into the spotlight. Ads for it are plastered everywhere I look. On Twitter, you can find old tweets from well-known streamers advertising the game and the fact they were planning to play it on stream.

Just last week, a large event was announced involving celebrities and popular streamers. But that event has now been postponed as Amazon Games focuses on improving the game. That appears to be the current state of Crucible: Nearly every post on its official Twitter account is about patches, updates, fixes, and new builds.

From a technical standpoint, it seems that Crucible’s biggest problem is with matchmaking. Players are having to wait a long time to find matches. This could just be an issue with its servers, but it could also be a sign that Crucible doesn’t have a large community supporting it. Glancing at the player count on Steam Charts, things aren’t looking good. With a peak of 10,600 concurrent players, Crucible is doing worse than 2016’s Battleborn, a similar hero-based PVP game that never found much success. As of today, fewer than 2,500 players are currently online in Crucible. And that’s a problem for a game built around the presumption that many players will log in every day.