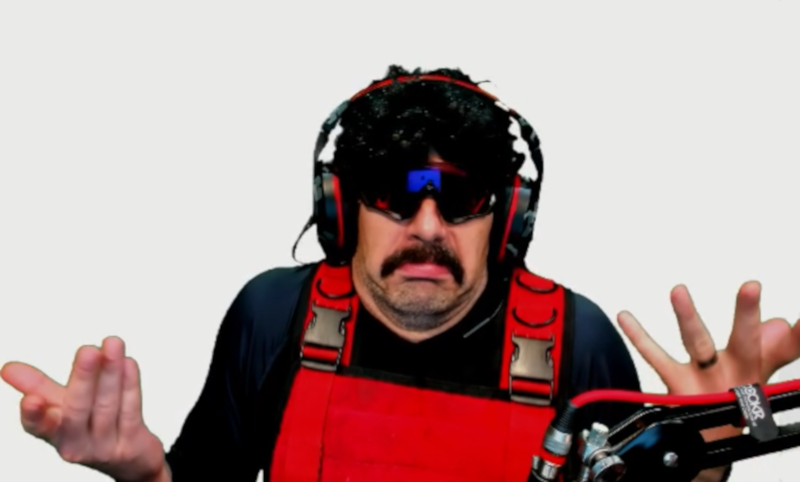 Image: Dr Disrespect
To sign up for our daily newsletter covering the latest news, features and reviews, head HERE. For a running feed of all our stories, follow us on Twitter HERE. Or you can bookmark the Kotaku Australia homepage to visit whenever you need a news fix.

During a stream today, Guy “Dr Disrespect” Beahm, whose 4 million followers make him one of the most popular streamers on Twitch, shared two pieces of widely debunked coronavirus-related media with his viewers. Many viewers reacted with shock and disappointment. Others cheered him on. He never dropped his facade”never removed his trademark wig or sunglasses”but he seemed quite serious.

Dr Disrespect, who I’m beginning to suspect might not be a licensed medical professional after all, decided to voice his thoughts and feelings about the virus that has so far taken over 65,000 lives in the U.S. alone. He did this as an expression of solidarity with Elon Musk, who has spent the past week e-cosplaying as the wrong character from Deus Ex while arguing for an end to self-isolation and propping up the views of known conspiracy hucksters. But Doc ended up going much further than the billionaire.

First, Dr Disrespect read an article from The Hill, which Musk had retweeted, titled “The data is in”stop the panic and end total isolation.” This article, published to the site’s opinion section, draws many of its conclusions from a Stanford University study that suggested a much lower death rate than what is widely believed, but that came under immediate fire from scientists for failing to account for false positives in testing and questionable patient recruitment methods.

The piece also leans heavily into the idea of “herd immunity,” neglecting to mention the fact that scientists do not know for sure if prior covid-19 infection confers immunity nor how long that immunity would last. Generally, herd immunity requires a vaccine to be a truly definitive solution; otherwise there remains a risk of widespread reinfection. A vaccine is something we do not yet have and are potentially a long ways off from having. Despite all of this, people have argued that the author of the Hill opinion piece, Dr. Scott Atlas, is an authoritative source because he is a doctor. However, his background is in neuroradiology”not virology or epidemiology”and he’s a fellow at Stanford’s Hoover Institute, a conservative think tank that’s previously pushed sketchy coronavirus pseudoscience and characterised shutdown and isolation measures as an “overreaction.”

Nonetheless, Dr Disrespect reached the end of the piece and gave it his seal of approval. “Agreed,” he said. “Facts matter. Thank you, Scott.”

While reading through this article, he also highlighted a graph suggesting that some hospitals aren’t actually suffering from overcrowding. This drew quite a response from his chat, with viewers frantically typing that some hospitals only have capacity because social-distancing efforts are working. In general, chat was animated throughout. Many were incredulous at what Doc was implicitly endorsing.

“My grandpa died of this shit. Do you have a degree in virology? Speak what you know,” said one viewer. Others implored Doc to Google the Stanford study and read about how scientists had largely debunked it. But others cheered him on, praising him for pushing back against “the liberal establishment.”

Then Doc moved on to an even less credible piece of media: a viral video in which a doctor named Thomas Cowan, who is on disciplinary probation enforced by the Medical Board of California, makes the widely debunked claim that 5G cellular technology causes covid-19. Doc did not openly agree with the video, instead saying, “I’m gonna show something that is not directly related to what I just talked about. Something else, this what I’m about to show you, along with what I just read, combining the two together”that’s what gets me upset.”

The rules never fully apply to him, and when they do, who cares? Being shameless is part of his brand. It’s no wonder, then, that he decided to casually trot out a procession of coronavirus conspiracy theories.

There’s no need to take a point-by-point approach to that video’s many falsehoods. Cowan iterates on long-running conspiracy theories about electricity and viral illnesses that stand up to scientific scrutiny like a paper bag in a wind turbine. For example, he suggests that radio waves caused the 1918 Spanish flu, when the first commercial radio station began broadcasting in 1920. Things only go downhill from there. Despite the absurdity of it all, many people now believe that 5G causes illness, an idea that’s existed among anti-vaxxers and Alex Jones types since before the covid-19 crisis.

The ridiculous conspiracy video left Doc’s viewers even more dumbfounded than before, and they largely pushed back in chat. Some, however, voiced support, with a few name-dropping figures like Donald Trump and the eponymous Q of QAnon conspiracy theory infamy. Dr Disrespect did little to dissuade these people, chalking up elements of the lockdown to vague “agendas” that “we’ll just never be able to know or understand or get the true information from.” One viewer donated $US3 ($5), prompting Doc to read their message aloud; the viewer said they were disappointed in the streamer and cited the virus’ United States death toll of over 60,000. “I’m aware, but thank you for the $US3 ($5) donation,” Doc replied. Another donated $US15 ($23) and praised him for the “balls” it took to say what he did about coronavirus.

Dr Disrespect ended the segment by imploring viewers to consider what he’d shown them.

“All’s I’m saying is that, me being about to talk about that, read that stuff, let’s just not be robots and say, “˜Yes sir, we will do everything you tell us to do, government, sir.’ Let’s listen to the experts and… I don’t know. Again, I gotta bite my tongue,” he said, later adding that his intention was to “get the brain kinda going.” He also clarified that he wants people to resume working because he keeps receiving donations from viewers who say they’ve lost their jobs. “It sucks, you know,” he said.

Perhaps Dr Disrespect was just trying to get people to think, but he used two very specific, conspiracy-minded examples and zero others. He’d also just stated that he agreed with Musk and would like to see America “open the gates back up.” In other words, he made his leanings clear. Moreover, he did this seemingly without vetting his sources of information, eliciting protest from many of his viewers. If we’re reading this whole moment as charitably as possible, it was, at the very least, hugely irresponsible on Doc’s part.

But it’s not surprising that he chose to do it. Time and time again, he’s acted with reckless irresponsibility while streaming, only to briefly lose his platform or not lose it at all, then reach even greater heights of success. He cheated on his wife and signed a TV development deal with Skybound Entertainment, the production company headed up by The Walking Dead creator Robert Kirkman.

In large part, this is all possible because of Dr Disrespect’s shtick. He’s almost always in character, and his character is rude and loud”a toxic gamer stereotype turned up to 11. It’s all just one big meme, y’all, so calm down. He doesn’t actually mean any of this stuff, except when he does, but he retroactively gets to decide when he does and when he doesn’t. As a consequence of this, the rules never fully apply to him, and when they do, who cares? Being shameless is part of his brand. It’s no wonder, then, that he decided to casually trot out a procession of coronavirus conspiracy theories. If history is anything to go on, he probably won’t face consequences (Kotaku reached out to Twitch and Dr Disrespect, but did not receive a reply as of this publishing). If he does, he can say he was just messing around, apologise on behalf of The Dr Disrespect Brand, and be on his merry way.

But there’s a nasty side effect to that approach: After a certain point, nobody can tell if you’re actually kidding or not. Already, some on Twitter are suggesting that Doc was just having a laugh today, despite the fact that he never said or implied anything to that effect. That makes his excursion into Infowars-lite territory doubly troubling. Many can tune into a broadcast like that, think, “that’s just Doc being a wacky edgelord again,” and then tune out. But others don’t know him that well, or they aren’t equipped with the same critical faculties. At no point did Dr Disrespect say he was kidding or otherwise signal that he was not 100 per cent serious. It stands to reason, then, that some people might come away from such a broadcast thinking “This person I admire seems to believe these things. Maybe I should, too.” Or maybe they’re already on the fence, and they just needed a beloved public figure to push them over.

To wit, before his guided field trip down conspiracy alley, Dr Disrespect himself said that he was already most of the way there when it came to believing that it’s time to reopen America, but Elon Musk emboldened him.

“I don’t need Elon to convince me,” he said just before he decided to take everybody down the rabbit hole. “But to have someone of his magnitude and his expertise”it’s pretty clear that he gets it in terms of humanity and where we’re trying to go… I’m on board with his type of thinking.”