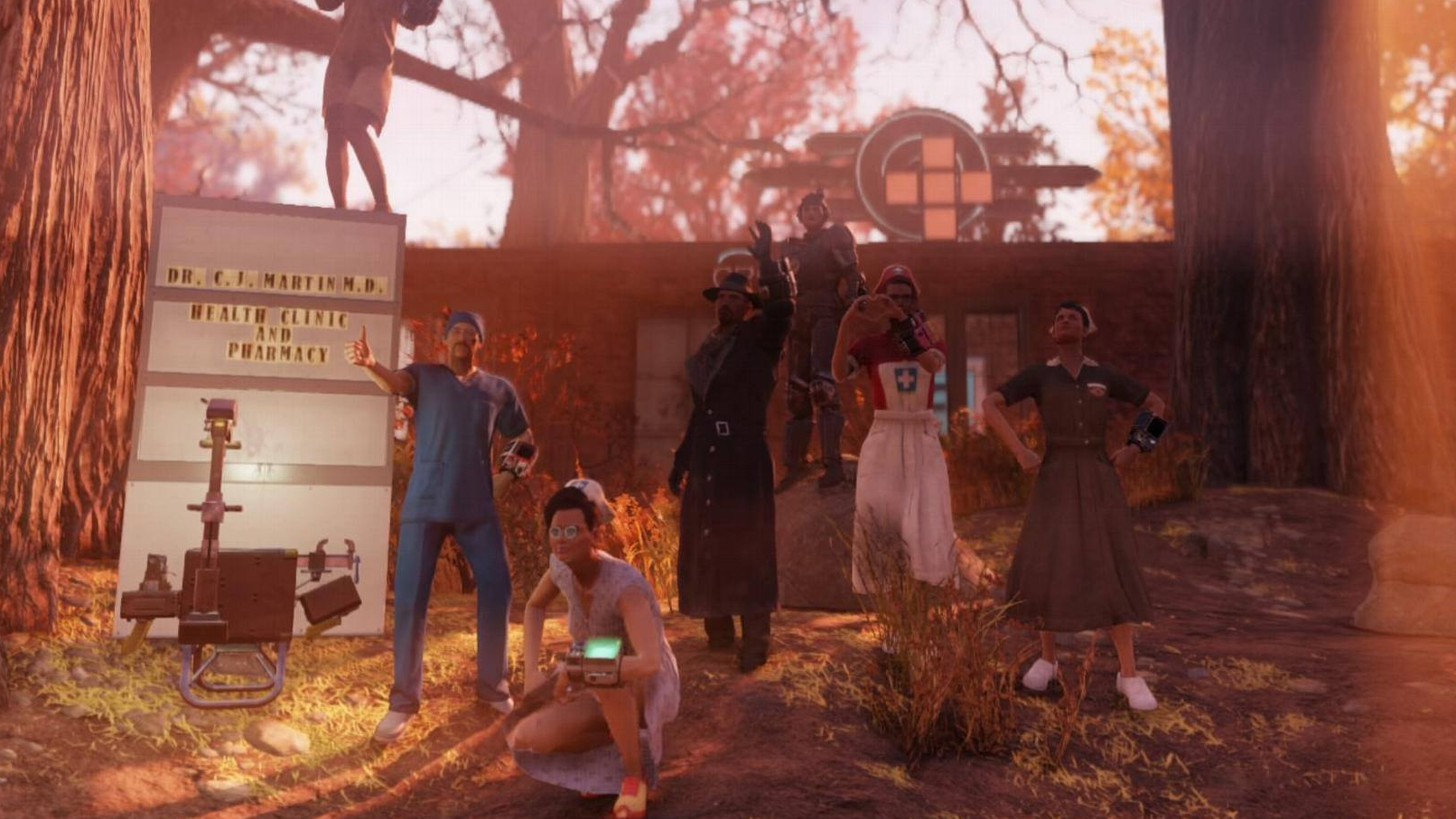 Screenshot: Brent “CJ Martin” Fairchild, <a href="https://www.facebook.com/DrCJMartin/photos/a.240717366839109/273410500236462/?type=3&theater">Bethesda</a>
To sign up for our daily newsletter covering the latest news, features and reviews, head HERE. For a running feed of all our stories, follow us on Twitter HERE. Or you can bookmark the Kotaku Australia homepage to visit whenever you need a news fix.

Brent “CJ Martin” Fairchild role-plays in Fallout 76 as a doctor offering aid to other players. After his real-life home caught on fire over the weekend, players have been raising money for his family to try to return the favour.

As first reported by Polygon, a GoFundMe page was set up by Fallout 76 podcaster Kenneth Vigue to help raise money for Fairchild, after he was airlifted to Jefferson Burn Centre in Philadelphia following the fire. “Today, on May 2nd, 2020, a fire broke out [at] their home and he got his wife and son out safely, however in doing so, he received 1st and 2nd degree burns to his hands, face and feet and also suffered severe smoke inhalation,” wrote Vigue on the fundraising site.

Fairchild’s become well known in the tighter-knit parts of the Fallout 76 community not just for his in-game generosity but also his dedication to role-playing as a medical professional within its post-apocalyptic world. His hippocratic mission has spawned an entire clinic where players coordinate to produce thousands of the game’s healing Stimpaks a day.

“The reason he specifically means a great deal to us is that he is the first true roleplayer any of us heard of in the game and inspired all of us in our own roleplaying and in my case, storytelling,” Vigue, who runs an episodic Fallout 76 podcast called Chad, told Kotaku in an email.

As a doctor, Vigue said Fairchild has been able to act as a neutral character, interacting with all manner of Fallout 76 clans from the violent E.A.T.T cannibals to the D&D-style Fallout Five-0 group, best known for holding a trial to determine another player’s in-game fate. “Beyond that, he’s just a really passionate fan of the game and a really great guy,” Vigue said. “He and I have had the chance to talk a few times and he was set to voice his character on my podcast this month, so I got a chance to know him better.” 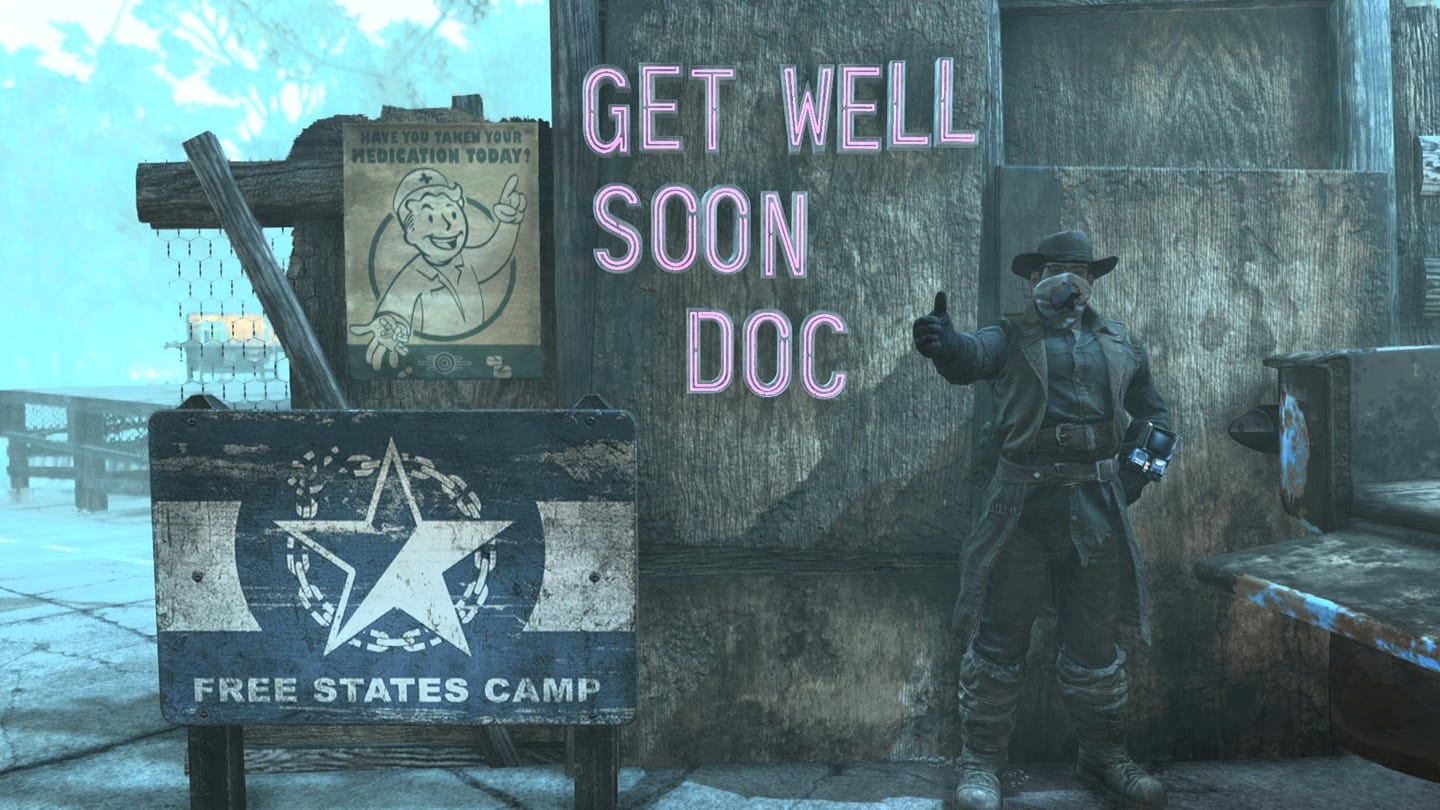 These other role-playing groups have been spreading the word of what’s happened to Fairchild and his family, and the GoFundMe has already raised over $US6,500 ($10,107) to aid in necessary medical and home repair bills from the accident. “I only met Dr CJ Martin a few days before this happened but was truly amazed by the community he has built and the sanctuary he has given us within our tight little Fallout 76 family,” wrote one of the donors on the fundraising page. “I wish you the very best and hope that you are back in good health soon!”

Meanwhile, some players have even taken to posting “Doc” signs outside of their in-game campsites in support of him. According to Vigue, who says he has been in contact with the family, Fairchild was discharged earlier today and headed somewhere temporary while they figure out the damage to the house.

“He was incredibly emotional about the outpouring of support and said he was thankful for each and every person,” Vigue said. “He also said and I quote, ‘I can still press X though, so this won’t keep me from making up stims for y’all!’”